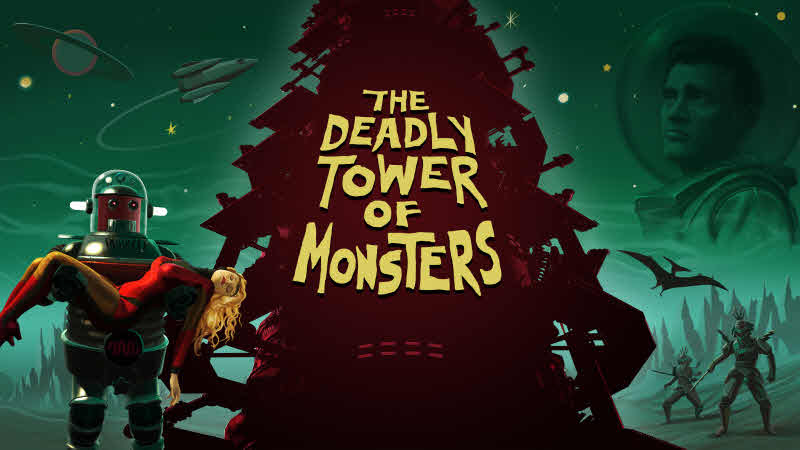 For years I've dreamt of having a video game that was like playing a really bad sci-fi movie. Thank the Argonauts for ACE Team (Rock of Ages), who are making this dream a reality with their latest endeavor The Deadly Tower of Monsters. Needless to say it’s just about everything I could imagine from a B movie-inspired video game.

The Deadly Tower of Monsters has you control the movie of the same name, as its director Dan Smith records a commentary track for the film’s upcoming DVD release. Taking place on the planet of Gravoria a trio of unlikely heroes (a spaceman, a warrior king’s daughter, and a robot) try to survive the mysterious land that is filled with violent monsters, hideous beasts, and creatures of the unknown. Of course with it being a sci-fi flick from the 1950s the cheesiness level is cranked all the way into the red. Stuntmen are dressed in ape costumes, spaceships fly with the assistance of thin wires, actors are replaced on the fly with rag doll versions of themselves during rougher stunts, and many other hilarious tricks of the old-school moviemaking trade.

During my demo I controlled the first hero Dick Starspeed as he fought against giant robots and apemen, as the director talked about how proud he was of his “groundbreaking” film. In one instance Dick came across some vicious dinosaurs, brought to life via Harryhausen-inspired claymation. Soon a nasty Kong-sized gorilla grabbed Dick (albeit a doll version of him), as the next hero Scarlet Nova attempted to save him from pure deadly terror of death. After rescuing Dick, poor Scarlet found herself locked in a high tower by her menacing father, but with the help of her trusty jetpack escape was fairly easy. All it took was a fancy laser gun that can aim from corners to take out spaceships and laser wall controls.

So far this game is every corny sci-fi film fan’s dream come true. I lost count of how many meta jokes came across my screen as I played. The jabs made by Dan Smith against current CGI films are as funny as they are understandable, as the rise of computer animation has taken a lot of the magic away from the stop-motion universe. Those who grew up watching the likes of Joel/Mike, Tom Servo, and Crow ripping films like this game emulates to shreds will find so much to love about The Deadly Tower of Monsters. It’s a lovable nod to the movies of lore that were as awesomely terrible as they were terribly awesome.

The Deadly Tower of Monsters is due to be released this fall via Atlus on PS4 and PC. Definitely get some popcorn and a few of your wisecracking robot pals in on this experience.