Back at PAX East a couple months back I stumbled across a Plants Vs. Zombies-styled game that featured many big indie bands playing their hearts out in order to save the world. Created by Pop Sandbox, LOUD on Planet X was a cool rhythm-based tower defense title that was as challenging as it was rocking! A couple days ago Pop Sandbox brought the game to Kickstarter, in hopes that both gamers and music lovers will help to make this little game bigger and better.

LOUD on Planet X will sport 24 songs from twelve of the finest artists out there. From twin rock darlings Tegan and Sara and the Canadian hardcore punk kings Fucked Up to the hip-hop sounds of Cadence Weapon and the new-wave vibes of Metric the game is already sporting some heavy-hitters within the scene. As you play you will use strobe lights, smoke machines, bouncers, and amplifiers to keep the invaders from disrupting the show. Each band will also sport its own signature attack that suits the band proper. For instance, when playing a Fucked Up song and igniting the special attack, frontman Damian "Pink Eyes" Abraham will rip off his shirt and start tackling all the aliens on the screen. (As someone who has seen the band live many times, I can vouch that this attack is indeed canon.) 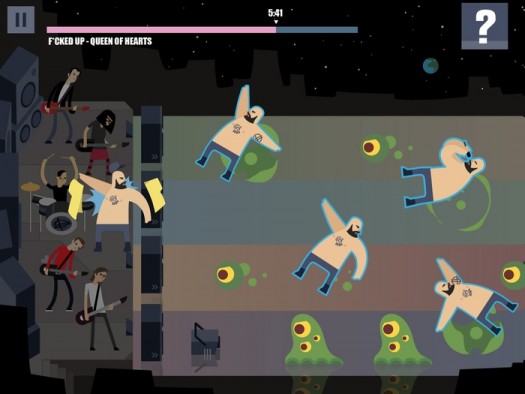 Plans are underway to bring it to PS4, PlayStation Vita, Steam, and mobile devices, with Wii U and Xbox One versions being made if stretch goals are reached. (Currently the goal is set to $41,072, or 50,000 Canadian dollars.) Rewards for backing the Kickstarter include a 7" vinyl of the score composed by Fucked Up's Mike Haliechuk & Jonah Falco and Broken Social Scene's Brendan Canning & Justin Peroff, guitar picks, you being made into an in-game avatar, and invites to the game's launch party in Toronto and a private dinner with the developers.

To pledge your allegiance to LOUD on Planet X, check their Kickstarter here, and take a listen to a sneak peek of the score below!