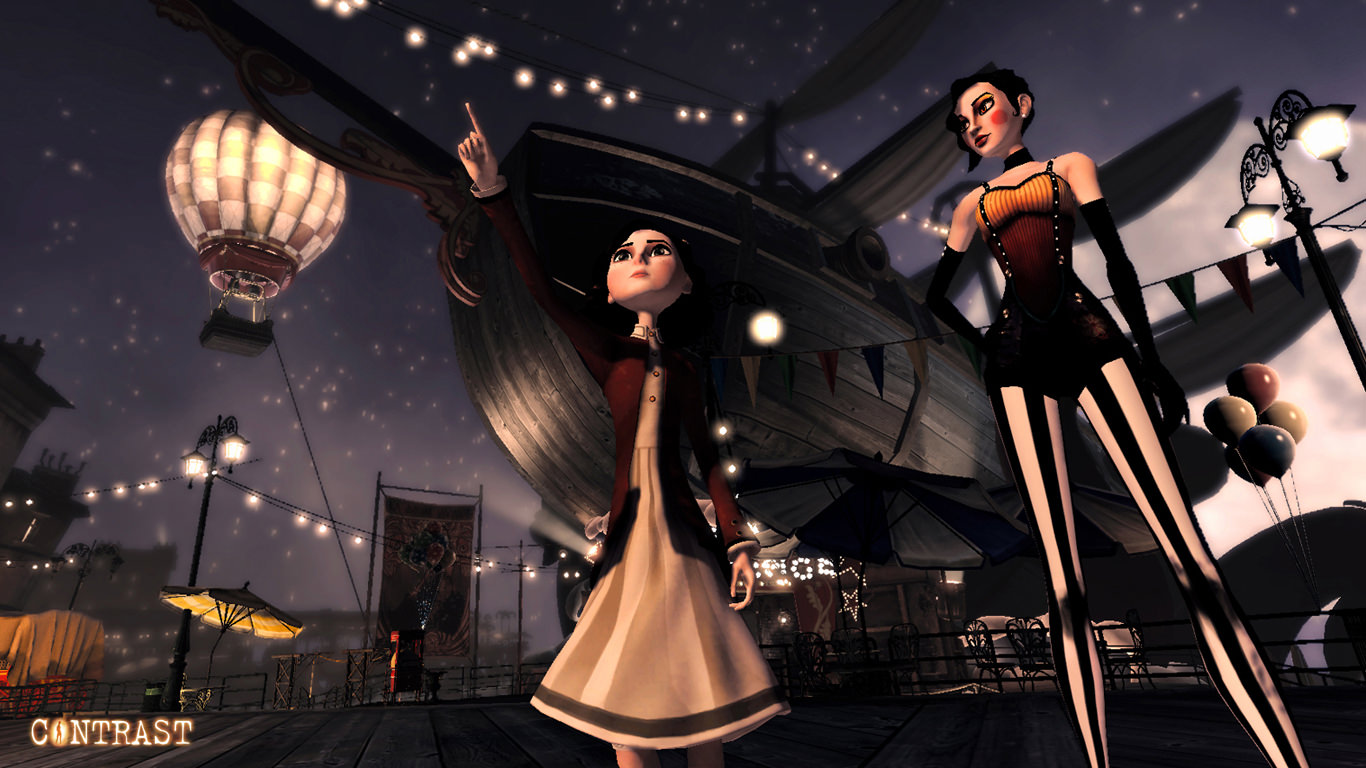 A couple years ago Hudson Soft released a game called Lost In Shadow, a side-scrolling puzzle title that had you control the shadow of an unnamed protagonist. While it had some cool concepts the game itself was a sadly a forgettable affair. With the launch of the PlayStation 4 another game with similar characteristics has appeared, this time appearing in a more third-dimensional realm. Enter Contrast, the debut title from Canadian company Compulsion Games.

Contrast has you take control of Dawn, a young woman who can shift between the real world and the shadow realm. She is accompanied by Didi, a young girl who sneaks out of her room to see her mother Kat perform. Her father Johnny returns, and promises that the three of them can be reunited once a new deal goes through, one involving a magician known as the Amazing Vincenzo. Of course not everything goes to plan, and when the promises of Johnny slowly start to fall through it's up to Dawn to catch and fix them for the better of the family reunion.

As Dawn you will be tasked at solving puzzles, many of which involve shifting into the shadows to reach bigger heights to grab the necessary items to move to the next section of the level. On occasion you will have to grab items and bring them, into the shadows in order to solve the section of that level. While the game progresses you can also find hidden goodies that help to unlock the mystery behind the game, as well as showcase the era Contrast takes place in.

The game's world is beautiful to behold, sometimes reaching the levels of an indie BioShock Infinite. Dawn and Didi's come off as something from the realm of Tim Burton and Neil Gaiman, with our heroine looking a lot like Gaiman's wife Amanda Palmer. However despite the game's gorgeous appearance there are a few weird glitches that keep pulling me out of the experience. Whenever I picked up an object and dropped it almost every time Dawn would freeze in a T-position as the item slowly fell to the ground. I also found the character getting stuck in level areas after accidentally shifting out of the shadows. (This happened a lot during Act II of the game.)

One of the highlights of Contrast has to be its jazzy soundtrack, composed by Nicholas Marquis. It helps to set the mood of the game, not to mention captures the sounds of an era that has been making waves once more within our generation. Performing the singing voice of Kat, Laura Ellis creates a sultry melody worthy of any jazz club, seedy or classy.

Contrast's story can seem a little uneven at times, and on occasion I couldn't help but feel sorry for the character of Didi. Perhaps her innocence may take the best of her, but the way she is treated in the game by her mother and Vincenzo made me feel a little uneasy. I know they were going for a dark tale, but the way it was presented here comes off more shallow than meaningful.

There's also the issue of the story itself concluding before the real answers are revealed. We're not exactly sure who Dawn is, even after spending the game's entirety playing her. The reason why Didi is the only character not presented as a shadowy figure is also left unanswered, and when one of the side characters reveals to be more than they seem it unleashes a whole new can of worms while the other one still sits open. Perhaps there will be some DLC later on that will answer these questions once and for all, but for now I'm left pondering what sort of story I've been led through.

Contrast will take you roughly three hours to complete, which is asking a lot for a $15 game. The game may has some great aspects, but there's not enough to merit the price tag. PlayStation Plus members will be able to get the game for free as of this writing, but those who either miss out on the deal or don't have PS+ may want to wait for the price to drop before jumping into this game.

Contrast has a lot of great ideas. Unfortunately they are being held back by some glitchy mechanics and a mediocre story that ends too short. I do look forward to seeing what Compulsion Games has to offer in the future, as they have potential to being a well-received company. However Contrast isn't a game you shine the spotlight on.

Reviewed on the PS4. Originally posted on the ESH EGMNOW Page.