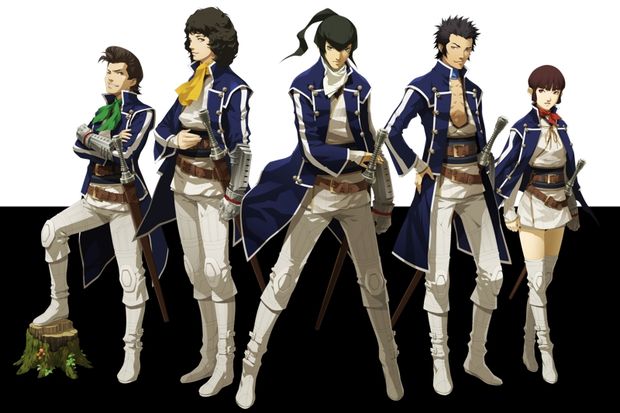 Like Final Fantasy and Dragon Quest the Megami Tensei series has seen its fair share of familiarity within the gaming industry; the main difference, however, is that it took far longer for Megami Tensei to come to the West (ten years later, specifically, with the first Persona title). Since then, however, popularity for the series has reached higher grounds, and while it's not as mainstream as anything Squaresoft/Square Enix has created it has in some cases proved to rival the competitors in regards to storytelling and gameplay mechanisms. This past month the latest in the series Shin Megami Tensei IV hit the states, but does keep with the quality of the previous Western releases?

Players take control of Flynn (or whatever you'd like to name him), a peasant known as a Casualry who hopes to become a Samurai. After being fit with a Gauntlet the object finds Flynn worthy of using it, ergo making him a Samurai along with other newcomers Walter, Jonathan, Isabeau, and Navarre. As Samurai their task is defeat demons that have appeared within Naraku, an underground vicinity under the kingdom. Meanwhile Flynn keeps having recurring dreams involving the other Samurai, as they talk about either the rescue or destruction & recreation of their current world.

As the game progresses word gets out about someone known as the Black Samurai, who is giving Casualries books of "Literature" that transform innocent people into demons. After catching up to the Black Samurai it is revealed that she is not only the leader of the Gaia cult, but also the demon Lilith. It is here where Flynn needs to make a choice, leading towards different paths and endings to the game.

Like in previous Megami Tensei titles you will be placed in turn-based battles that will have you either killing demons or trying to convince them to join your team. Up to three demons can join you in battle at once, although there is the option of switching demons during battle. (Be careful, as that can cause you to lose a turn, especially during bigger boss battles.) You can also create new creatures via Demon Fusion, but it can be a hit-or-miss regarding what comes out. Sometimes you'll get a very powerful demon out of it, whereas other occasions you'll find the outcome being something that's a lot weaker than both characters combined.

With Eclectic Styles, Beck Gives B...