For Xbox Live Arcade trials last week there were Bellator: MMA Onslaught and Spelunky. Could be worse, but I've been wrong before...

Bellator's short teaser trailer shows how much it sucks, and I have to say that I tried my best to give this game a real chance. I really did people. I kept going with being on the verge of rage quitting (which I did, as my head hangs low). Although this is the demo, the actual gameplay may be different. That said the A.I. (Artificial Intelligence) is really bad. 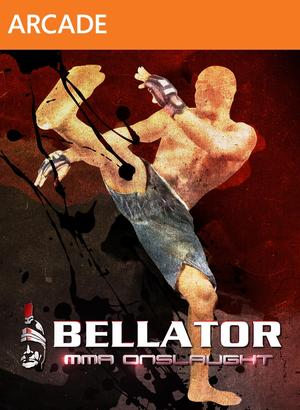 I'm always up for a challenge, but if you have had your ass handed to you every time -- even switching the fighters they provided to you and lose to both guys -- that tells you they made it impossible for the actual player to beat the other guy. The one thing I can maybe give to them is they designed a "rope a dope" setup in the game, yet they really did turn this into MMA Mortal Kombat/Street Fighter game that deals with a health bar. Yes I said it, they have a freakin' health bar for the fighters. To add on to that they have a fatigue bar, where the amount of hits you put on the opposition will tire out your character. Not only that, when your fighter gets tired he turns red. When he is red, one punch, one kick, basically if the opponent sneezes on your fighter, it's an automatic knockout. 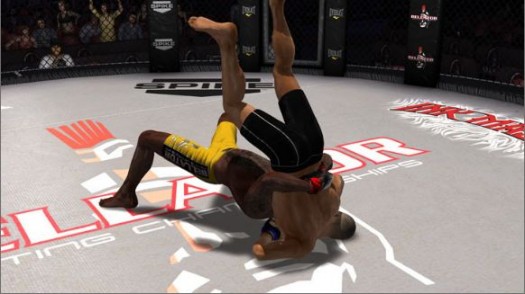 The controls are somewhat simple, yet they are complicated when it comes to the aspect of grappling. In some parts of the movement of the fighter I was able to get out of grapples and ground & pound situations no problem. With the other fighter shooting in for a takedown I found it very hard to counter, and it would end up going from the ground back to a stand up match. 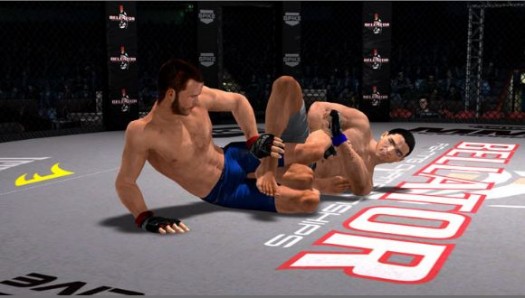 The two fighters they give you for the trial are Michael Chandler and Pat Curran. When they introduce the fighters, it seems that they didn't even want to bother with the announcer to say the full entrance for the person. The voice of the announcer goes from "Fighting out of the red corner... Michael Chandler," with a rare change in tone of voice. The music overlay is nothing too impressive, as they did a fair job on that. The graphics as you can see from the photos are also pretty nice. 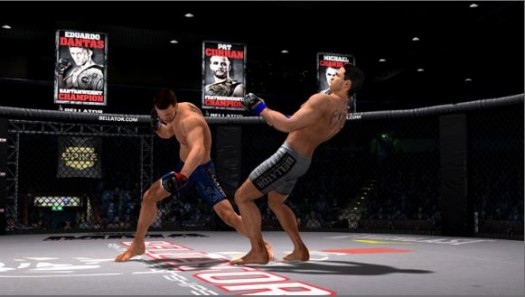 After cooling down from the rage quitting, I went to the game again and changed the difficulty to easy. This is hard for me to say because I like playing the hell out of my games on Normal and Advanced settings, but this game is so damn fast. The other fighter you're going against don't have to remember the damn setups just to throw a punch, kick, block, grapple, etc. It's just one of those things where this game if you don't want to tear your freakin' hair out, you'll have to play on easy for a long amount of time. Otherwise prepare to have your ass handed to you on a silver platter. 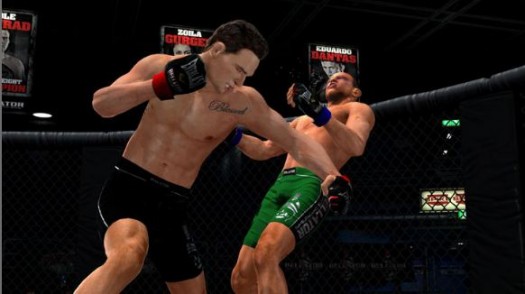 Another thing that pisses me off is at the end of the match they give you a grading system. I'm sorry, but I got out of high school and college to stop being graded on everything I do. Hell, the match I finally won on this game due to turning the option to easy gave me a B+. It's like what the hell! I gave most strikes, most damage delt in a one round that had three minutes in it, and I get a freakin' B+. That is unacceptable in my terms of MMA! This brings me to a point: if you have OCD, and you like MMA games this one is probably not for you. However if you like getting your ass handed to you on a daily basis this game is right up your alley. 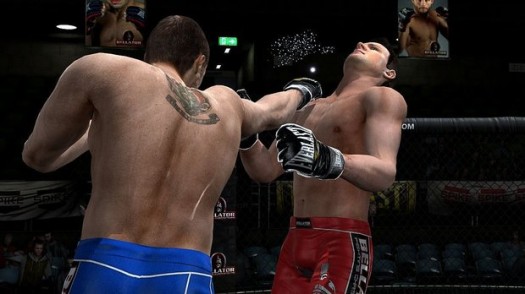 The trial for Bellator: MMA Onslaught is just a rude awakening for you to ask, "Am I up to the challenge of taking on a superior A.I. at a normal level that can drop you worse than taking a firey number two in the bathroom?" I look at this sucker and see that above the trial button it says it's going for 1200 Arcade Points. I'm sorry, but that's a bit too high. Hell even if it was 800 Xbox Live Points I still would find it to be too high. I want to say the 400-600 range would be more than adequate for this game. However I put you up to the challenge to make this decision on your own. Download the trial, and see what you feel about it. With the rating on this game it will have to be a low one. I hereby rate Bellator: MMA Onslaught a 1.2 out of 5 (or in the game's rating style a D- or F at best).

Between downloading this and Bellator: MMA Onslaught, I will give Spelunky Download of the Week. The definition of spelunking is "the hobby/practice of exploring caves," what Spelunky is all about. Apparently I didn't hear about this game from back when it came out in 2008 and won some awards on the PC. Now they are working on widening their field of players for their game with an update on the graphics and adding a multiplayer aspect to the game. The thing about me is I haven't been into many games dealing with 2D side-scrolling since I stopped playing Sega Genesis, but my fellow writer and member of B3 introduced me to Terraria, which also reminded me a bit of Spelunky. 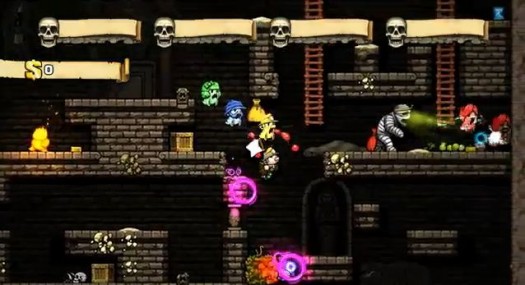 The game starts off with you picking your character. (Of course I picked the hunter wearing the blue hat.) You get to this treasure chest, and change into this other character Yang that tells you how to play the game. I do have to say Spelunky has a long setup to teach you how to move about the game, from jumping, run jumping, using your whip, how to cling on to the edges of walls, etc. The main thing with me is with a game like this I kind of want to get to the point. I do like the concept that I have to go and do the certain activity to learn how to use weapons and do movements, but they could of incorporated this into the game with the character you've selected (like in 'Splosion Man where you kind of learn as you go along). Suggestion: don't kick the ass of the store owner in the final tutorial, as you'll get your ass whooped. 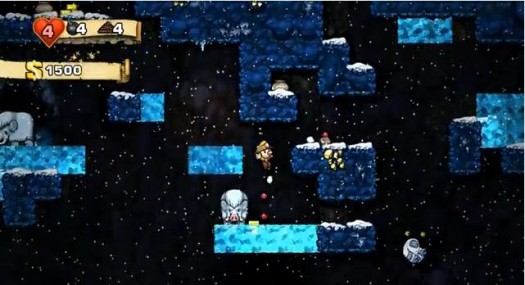 So after playing the three tutorials you can see the name of the game is grabbing the people and the golden skulls, and getting them to the end without taking too much damage from whatever enemies and traps that may be around. This game keeps you on your toes. When you have rocks around the area, make sure to pick them up and toss them in certain areas that may be booby-trapped. It may save your character's life and your aggravation. With the completion of the tutorial you finally get to start the mines section and start to see what the game is really about. It's interesting, as I wanted to see what happened when you die. So I got killed doing something stupid, then ended up going back into the map and it changed everything. This is pretty interesting because they actually regenerate new maps every time. Now that's a true challenge! 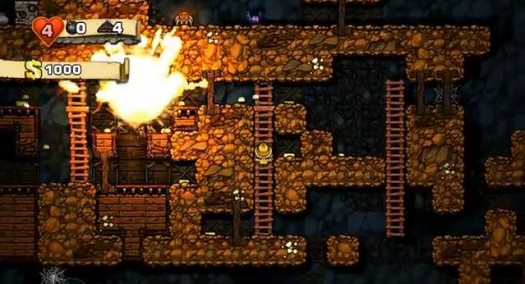 On a side note the music sounds something from 8-bit to 32-bit games. Not only that Spelunky made me paranoid for a second. I put I on pause, and there is a faint voice in the background that says, "Help!" which is the girl in distress. That scared the hell out of me! I thought there was a little kid or a cat outside my air conditioner, but this is what happens when you have a great surround system. It puts you into the game. 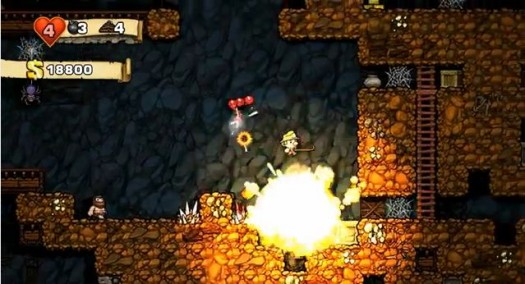 As a trial Spelunky gives you a fair amount of gameplay, but also asks you along the way if you want to purchase the sucker. I feel this game may be worth further going into, and this is also coming from a person who doesn't usually find these games too attractive. This one is also priced at 1200 Xbox Live Points, which I believe may be a bit too high. (I could say 800 to 1000 points may be more adequate.) I do give it to them on the concept of changing the maps each time, as it keeps you way more alert. You really have to pay attention to your surroundings. I have to suggest when you die keep pressing the X button. It will bring you back into the map instead of dropping you all the way to the entrance of the cave. (I found myself doing that a lot.) To give this sucker a grade, I'll give it a respectful 3.8 out 5. It's a game that certain people will like because of its maze aspect. It also makes you feel like Indiana Jones, especially when saving the girl and getting the golden skull. Beware: that big boulder will be around to get you when you grab the skull, so all I can say is RUN BITCH RUN!!! 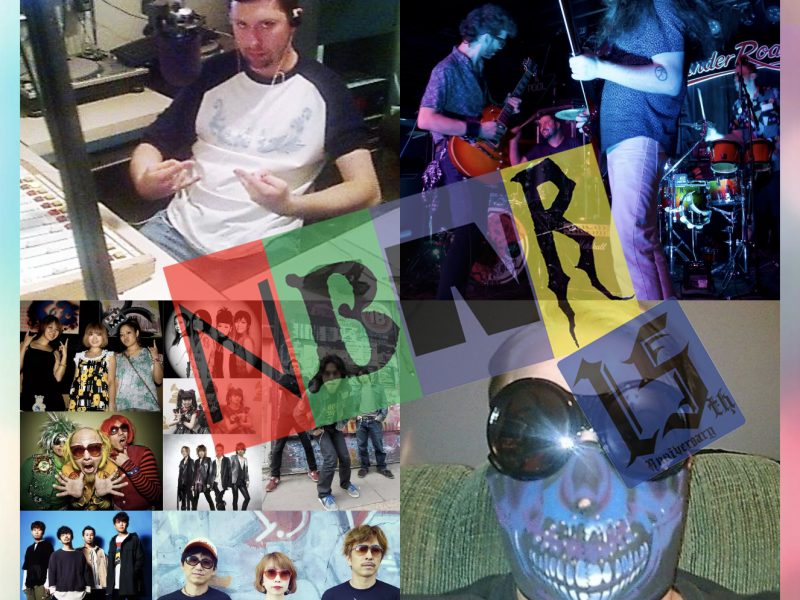 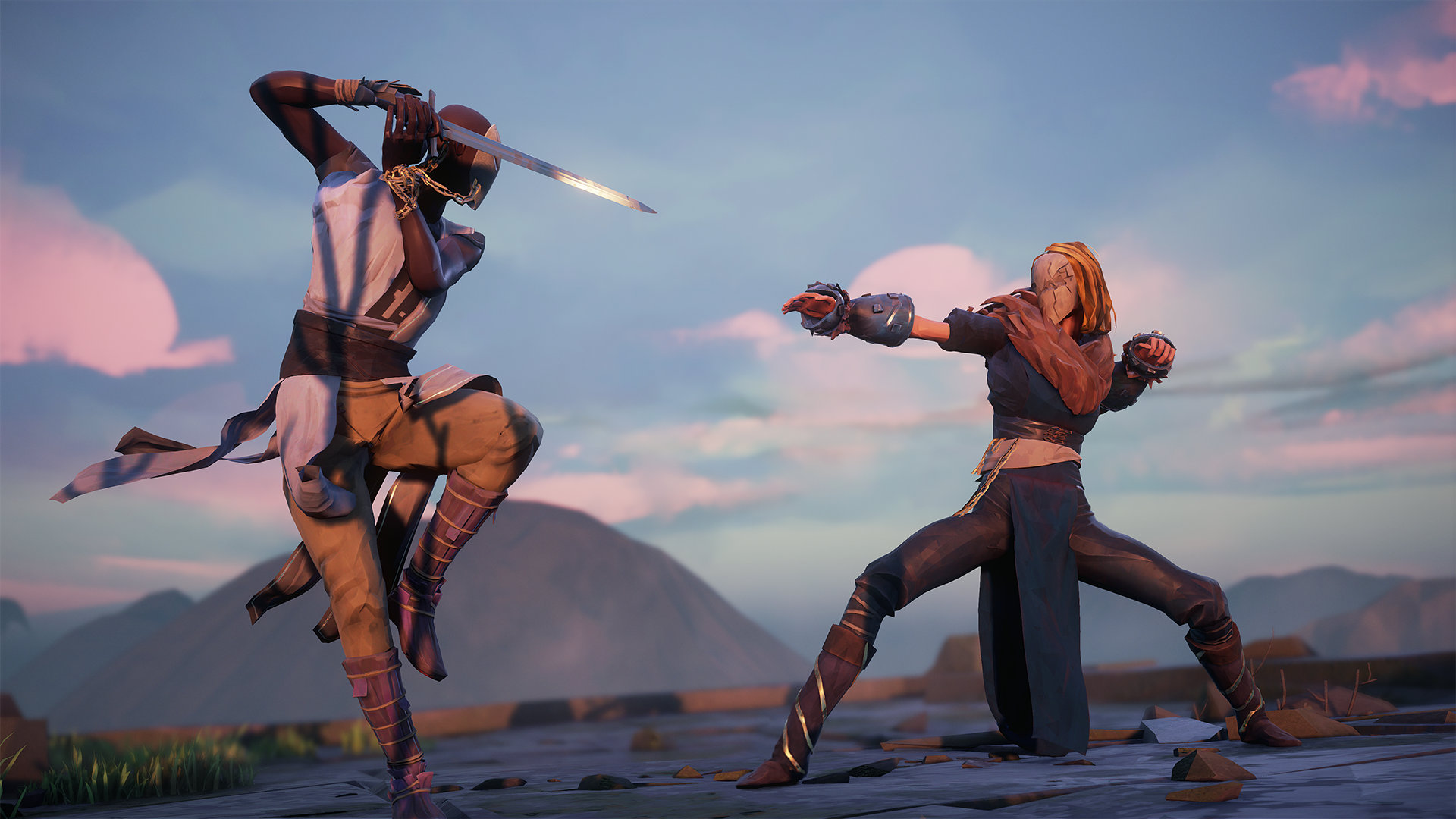