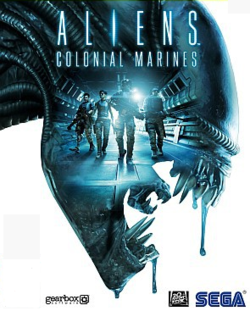 This movie-based game won't be your fish 'n chips Colonial Marines; this is the Marines in space. I wasn't expecting anything great going into seeing Aliens: Colonial Marines, but I got slapped in the face with awesomeness. Right off the bat I say thank you, Sega!

Going into the booth of Colonial Marines we got to see one of the designers starting playing the game roughly fifteen minutes into the story, getting onto the Sulaco where the marines were already aboard. While on the sealed umbilical cord that's attached from the rescue ship to the Sulaco it shows blood on the wall, and the character says how slippery it is. When he gets about halfway there an explosion happens, and you find yourself running to the Exodus because the seal starts cracking. The graphics for that scene were impressive, with the fire looking pretty good and the ripple effect down the umbilical cord giving an awesome sort of realism to what would happen from an actual explosion in space.

Once you finally get into the ship you start investigating the loading dock area, finding a group of soldiers that have gotten ripped apart and are fighting to keep one another alive. They tell you to move on, and you pull out the motion tracker to survey the area, a pretty spot-on device that gives you an idea where the Xenomorph were in the area. When you come upon a gruesome site of dead bodies with holes in there chest plastered to the side of the wall you find one that is still alive. While trying to cut out of it a Xenomorph pops up, and you find yourself having to kill it and rescuing the Marine.

You and the rescued Marine start advancing to the bridge so you can obtain the ship's recorder in order to find out what had happened. After fighting off a lot of the aliens and finally getting back to the loading dock you end up in a last stand kind of position with a chain gun with a cool retinal sight, where the sound effects from the guns were done very true to the movies. It all comes to an end when you're running across, and the Marine you saved from the wall ends up screaming with a Xenomorph popping out of his chest. You discover that the Marine has rigged himself with explosives, and takes out the umbilical cord. You fight your way back by holding onto the side of what left of the cord, and run over to the main ship. It is here where the impressive presentation ended. 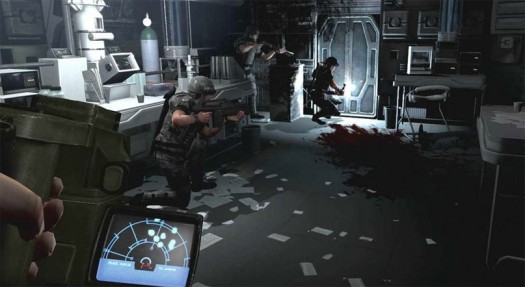 That wasn't all they gave us, as they then led us to a second line where we could watch the creators of the game play as aliens against the people that were ahead of you in line. We chatted with the developers, giving us feedback on how the multiplayer works. We then got to play the game on the other side, where I was happy to take out eight aliens during the round. The multiplayer was done very well, and it was crazy to go up against the aliens, as they were like kids in a human-filled candy store. They also showed us the crusher alien, which is this massive freakin' alien that will turn you into a bloody stain on the floor. The thing had so much mass that it could rip you apart.

I had a smile on my face walking out of Aliens: Colonial Marines, and I'm ready to put my money down for the game when it comes out.

If You Want Bunny Demons, Give Us...