HomeVideo Games"Return To Dream Land," But Not To Form

"Return To Dream Land," But Not To Form

"Return To Dream Land," But Not To Form 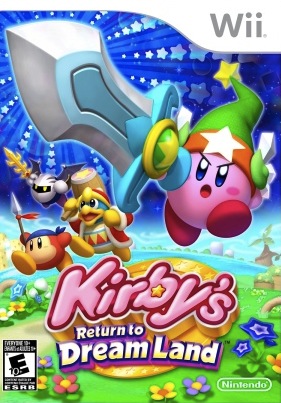 Last year I had written about Kirby's Epic Yarn, and while I enjoyed it for what it was I still felt it wasn't the platformer I was looking to see our little pink ball make his return to grace in. It took away his sucking power (the thing that made Kirby who he is), and instead went for this strange (but unique) take with yarn and string. I had hoped that his next title would be more to the classic styles of Kirby's Dream Land, and now I got what I wanted in Kirby's Return to Dream Land. After playing it through I just wish I could take it back.

A 2.5D side-scroller players take control of Kirby as he searches his planet for pieces of a spaceship belonging to an alien creature named Magolor. With Kirby you can defeat your enemies via your sucking powers, and either swallow them or shoot them out at other enemies. Like the majority of Kirby titles some enemies that are swallowed can unleash new powers for the round guy, ranging from using swords & other weapons to breathing fire and spouting electricity. From time-to-time enemies will relinquish a super weapon that can wipe out everything on the screen, as well as find hidden stars and warp sections. Up to three other players can join you anytime during gameplay, with them being able to control Meta Knight, King Dedede, and Waddle Dee. 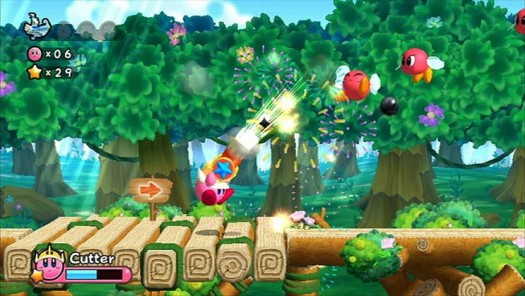 Throughout the levels Kirby must also collect energy spheres that are scattered throughout the world. These energy spheres will be able to unlock special challenges, power rooms, and mini-games such as ninja star throwing and scope shooting. By yourself these mini-games are somewhat of a bore, but with two or more friends these little games can be a blast. The power rooms can come in handy if you want to start a level off with specific ability.

Being in development for almost eleven years -- with ideas and entire gaming concepts thrown off the wayward -- Return to Dream Land does feel like playing a Gamecube title. You hold the Wiimote sideways, with only minimal special controls like smash and shake during a couple areas of the game. The game also looks like a Gamecube title, but while they aren't up to par to most current-gen titles I couldn't help but feel relaxed and at ease while looking at the bright colors and fantastical worlds. Perhaps it's hard to imagine what Kirby would look like in high-definition, so the overall look of the game can be forgiven as it still keeps to the whimsical look of Kirby's world. The music by Jun Ishikawa and Hirokazu Ando continues on the tradition of beauty and fanciful tones found in previous Kirby games. 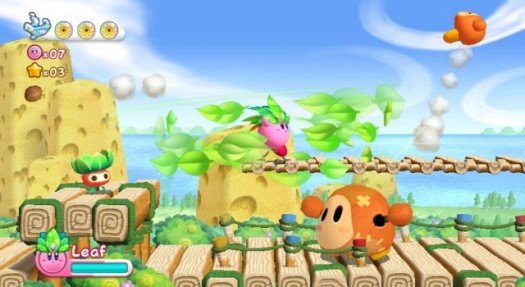 Now comes the bad part of the game: it's too easy! During my entire gameplay I found Return to Dream Land to lack any sort of challenges, and it seems like they've done nothing to up the ante in the Kirby franchise. You can die in this game (unlike in Kirby's Epic Yarn), but I only remember dying less than ten times in my playthrough. I don't seem to understand why Nintendo and HAL won't up the ante in the difficulty realms, as it seems like that would also boost up the fun factor of this game. Even the boss battles lack any sort of challenge, as they can be beaten within a couple minutes. In laymen's terms: Return to Dream Land gets dull fast.

Return to Dream Land can be beaten in about eight hours, and that's if you play it by yourself. With friend you're probably looking at a five-to-six hour gameplay timeline. While special time challenge levels and mini-games add a bit of replay value to the game they tend to get boring after awhile, especially if you're playing them solo. It would've been nice to play online with friends around the world, but it looks like we'll have to wait till Kirby appears on the Wii U to do that. 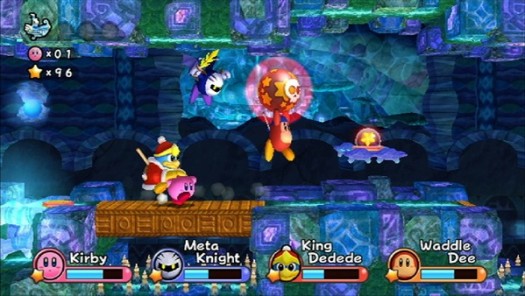 I really wanted to be enthralled by Kirby's Return to Dream Land, but it left me with a disappointing frown instead of a glowing smile. It lacks any sort of imagination that was found in Kirby's Epic Yarn, and it does nothing different to add to the once-beloved franchise. For young gamers new to Kirby, this game would be fun; those that grew up with the round pink ball will find themselves sadly bored after the first couple hours.