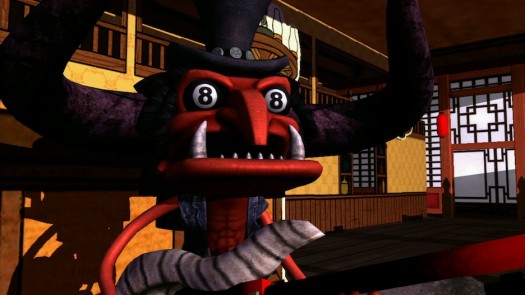 Happening sometime before the events of The Gunstringer players take control of El Diablo on the quest to find his queen. Unlike The Gunstringer the game sets itself up like a classic arcade rail shooter, where instead of being able to control El Diablo with both hands you simply just use your right arm to aim and shoot. Most of the time it works, but not as well as it did in the main game. You can't highlight any of the enemies, and it feels like firing at them is a tad tougher to accomplish than it was in the original game. 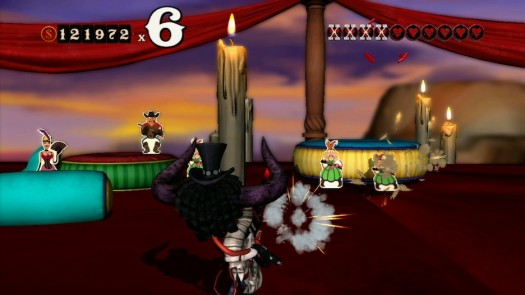 'Merican Adventure gives you ten hearts during each level, and you lose a heart if you either miss an enemy or if you shoot one of the townsfolk by accident. It's here where the game's challenging aspects rise to frustrating levels. There are many moments where the outlaws will be surrounding the women and children, making it almost impossible to not hit them as well. What's worse is that once you die you have to start from the beginning of the level you're currently on, as there are no checkpoints at any time of the level.

The DLC continues on the with The Gunstringer's puppetry appearance, which is still a joy to look at. Paper villains burst into hilarious confetti, and the detail in the wooden characters is still quite good. Its western-styled soundtrack will bring a smile to the faces of anyone in love with the Dollars trilogy or classic TV programs like Rawhide and Bonanza. A playthrough of El Diablo's 'Merican Adventure will probably take you around an hour and-a-half to complete, and that's if you had to start over the levels again as much as I did. 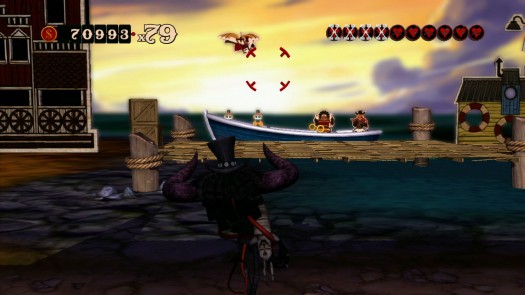 El Diablo's 'Merican Adventure is a lot of fun, but it can be aggravating at times. For 240 MSPs it's worth a couple plays, especially with friends around. Still, it's no match for The Wavy Tube Man Chronicles.