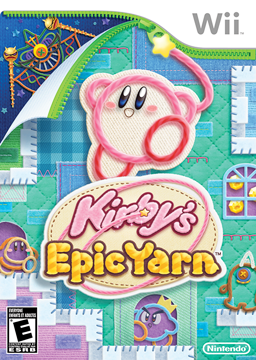 It would seem unthinkable to take away the one thing that makes Kirby, well, Kirby. His ability to suck up his enemies and use their powers has been a staple in the pink one's Dream Land franchise, so it came as a massive surprise to me when I saw that our round protagonist would be stripped of his wondrous powers. Fear not, though, as Nintendo and HAL had a trick-n-twist up their sleeves: the ability to weave powers with the usage of yarn and fabric. It would've seemed like a weird joke, making a platformer based off of the power of knitting and sewing, yet here it is in full force in Kirby's Epic Yarn.

In this brand-new adventure we find Kirby transported into Patch Land, a knitted world that has been split into pieces by the evil Yin-Yarn. While Kirby is saving Patch Land Yin-Yard is using his powers to take over Dream Land, along with taking control of King Dedede and Meta Knight for his plans to do...whatever he thinks he can do with a more solid world. With his sucking powers gone Kirby has to find other means to rescue his world and his new friend Prince Fluff's. 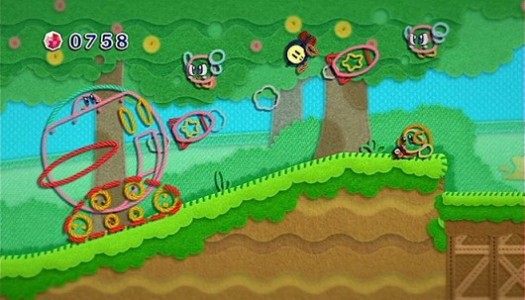 These other means of rescue are discovered within Kirby's newly knitted form. Thanks to his yarn-like physique Kirby can literally string up a whip and use it to attack foes, grab hold of objects and reveal secret hiding places with a few pulls. From time to time Kirby can even transform into various animals and vehicles such as dolphins, airplanes and cars to help gather up beads and various tools to help you along the way with unlocking new levels and discover a few mini-games here and there.

Seeing Kirby in his new surroundings is quite a wonder, as each level is heavily detailed in its knitted way thanks to both HAL and Good-Feel. You can easily see the stitches in the homes, as well as the tiniest of fibers on Kirby's or Fluff's bodies. While it may not hold a candle realistically-wise to, say, Little Big Planet you can tell that a lot of work went into creating these worlds and characters. Plus it manages to capture the softness of the gameplay that's featured, and although it might sound weird to call an action platformer "soft" it does give off a sort of relaxing feeling playing this game. The music by the trio of Tomoya Tomita, Jun Ishikawa and Hirokazu Ando also adds texture to the game, whether it'd be a light-hearted ditty through the ocean or a heavy song during a boss battle. 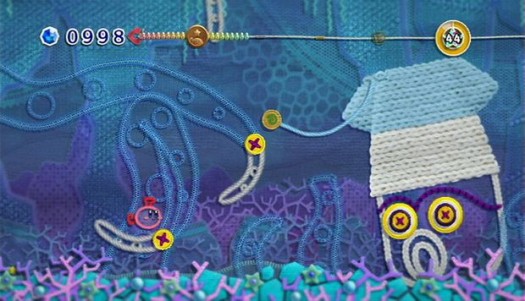 In regards to the gameplay Kirby's Epic Yarn manages to pack an interesting punch (or whip) to how it's played. By holding the Wiimote sideways you take control of Kirby in a classic NES way that takes the concept of simplicity and makes it work with our current-gen systems. Using this more straightforward style of controls players of any age can take control of Kirby. Adding on to the fun is the two-player option, where during the game at any time a friend can come in and play as Prince Fluff with you.

Despite the game being made for all ages I have one issue with Kirby's Epic Yarn, and it's a strange one. For some odd reason I cannot help but think that the game is presented in such a way that it's talking down to you. Maybe it's to pander itself out to its younger fanbase, but it feels like this title is underestimating the intelligence of its gamers. Perhaps it's the way the narrator is telling the story in the game, or it could be how at every turn there is some screen or help arrow showing you what to do. 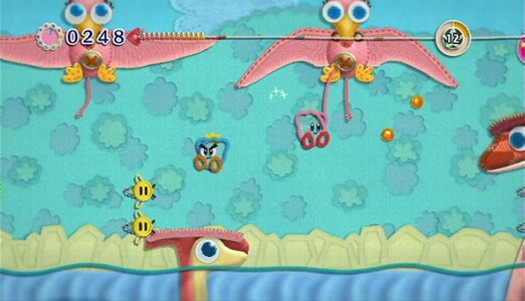 The one thing that could possibly be pointing me to this issue is the fact that you cannot die in this game. I kid you not: you are practically immortal in this platformer, with the only punishment served to you if you fall off a level or are hit by an enemy is having some of your beads you've collected knocked out of you (which you can easily recollect around your surroundings if you're quick enough). I am not sure why Nintendo decided to have its puffy hero be a Highlander of sorts, but for its older crowd it seems like a major cop-out to keep young gamers from getting upset over its game. If it had made it optional for your character to be immortal or not it would've made Kirby's Epic Yarn a little more gamer-friendly, and not just something that was catered to the younger crowd.

Another issue I have with the game is the living space sections. For the life of me I can't think of a good reason why this segment even exists in Kirby's Epic Yarn. It's not like other players can visit your custom home (as there is no online play), nor is there a way to add something different to your housing. Everyone gets the same items, and there is no customizing them to your personality. You just place them wherever you'd like, and that is that. Players will be able to unlock challenges by customizing other people's homes, but I think these challenges could've been presented in a much better light. 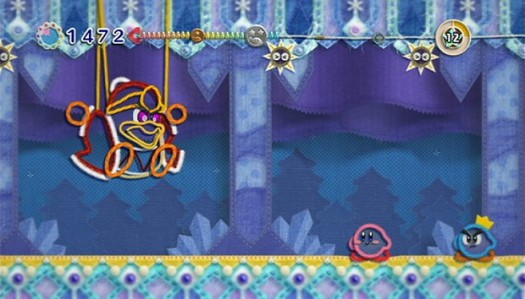 With fifty levels split up into eight worlds players can expect a good twelve hours of gameplay, not to mention a bunch of unlockable goodies and hidden challenges that can be added to the experience. The unfortunate matter in regards to the gameplay is the fact that once it's done, there's really no need to return to play it, other than to beat the entire game with a friend. However there is a lot to like in Kirby's Epic Yarn, and its style both visually and playfully will keep gamers recommending it to others to try.

Kirby's Epic Yarn doesn't quite realize its target audience, despite the many highlights in this game. At times it wants to satisfy its core gamers, while other times it tries to dumb itself down for the younger audience. Knowing the Kirby franchise I feel like they kind of couldn't figure out which of the two it wanted to gear itself towards. Regardless of this manner Kirby's Epic Yarn proves itself to be a fun title for everyone (and their friend) to play, although I hope the next Kirby title is more traditional in the classic Dream Land aspect.

MCM K1 Is The Wave Of The Paintbal...