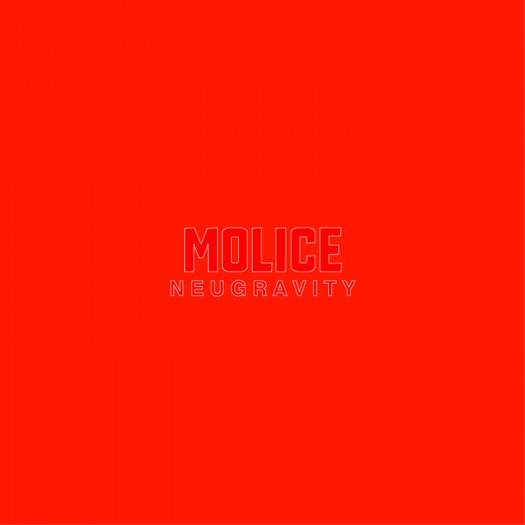 There's something about Rinko's tone throughout her band Molice's latest album. At times she's seems innocent, almost in a playful mood with her fellow bandmates Yuzuru and Takashi. However, in what can only be described as a sharp left turn, her perky persona becomes entangled into something more psychotic, as if she is determined to take out anyone and anything that crosses paths with her arms and weaponry. Whatever it may be, it greatly defines what NEUGRAVITY is: a schizophrenic monster out to give you a life-threatening good time.

Blade Runner plays a big role in the influence of the album's first couple tracks. The first, "RACHEL," drags the listener in with Yuzuru's whirlpool guitar riffs and Takashi's heart-pounding drum clashes, with Rinko taking the role of the replicant. Her vocals, done in English for the first time, spout the confusion that Tyrell's assistant feels throughout the original film. Are her memories real? Can she dream? What is the real truth? A couple times the lyrics come off a tad imperfect, but it feels more akin to said character rather than a simple translation error. "Please Please Pris" takes the perception of Daryl Hannah's character -- another replicant -- and seems to want to earn the trust of the listener. How foolish of them, however, as false comfort is just what Molice seems to bring to the table.

The band's true dark side comes full force in "FATEMA," where the listener is taken through a downward spiral of kittenish madness. Rinko plays with her prey, and the rest of the bandmates entice her to aim for the kill. You can just envision the anarchy being thrown around as the song reaches its climax. The same can be said for "Active Imagination," a track that hides its lunacy tone behind a crocodile's smile. Here Yuzuru rides away on his riffs as Rinko coos like a gleeful mourning dove during what should be a period of sadness, but instead is another excuse to lose one's mind to a shot of creativity. The tick-tocking "SOLDIERS" will have you embracing the madness with ever so much happiness, both morally and immorally.

There is a calm to this storm Molice have created, and it can be found in "Cheeky Afternoon". The band sounds relaxed, with Takashi quietly tapping away at his drum kit and Yuzuru strumming away in the forefront. Rinko seems more at ease here, her mad persona changed into one that's free-spirited. The quietness doesn't last, though, as it jumps into "YOUR nation," a song that gives way to a feeling of being chased. The epitaph on the album, "Jewel Story," is one final crazed romp through the album's movie-filled homages. Molice goes out on this album with guns blasting, fires blazing, and missions accomplished.

A step-up from Catalystrock, Molice's NEUGRAVITY is like an art house car chase flick, filled with enough sex, violence, character development, and awkward moments that will make critics and hipster cult fanatics drool with delight. It's more of a musical Death Proof than Drive, but the end result is still very rewarding. The crazed rocker anti-heroes walk into the sunset unscathed, ready for the challenges that tomorrow will bring.

Molice's NEUGRAVITY hits American stores on April 17 via Good Charamel Records, and in Japan on April 18 through VELOUR VOICE. Click here to listen to some preview tracks from the album!