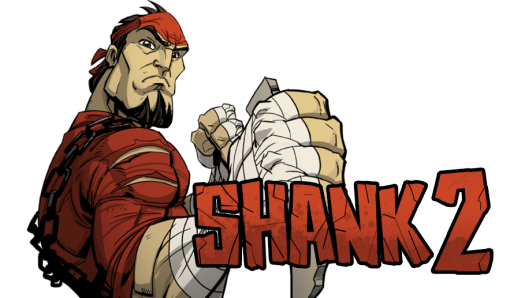 In 2010 the developers over at Klei Entertainment unleashed Shank to the world, a side-scrolling stab-em-up bloodfest that was great on the eyes, but a tad lacking in the game length department. (You can read our review of it right here.) Last September it was announced that a sequel was in the works, with EA's Andy Katkin promising that "it's an entirely new game." Alas, that statement couldn't be further from the truth.

This time around our hero Shank must save the woman who raised him in the orphanage he once grew up in, along with members of his ex-girlfriend Carina's resistance against the new El Presidente Magnus. Throughout the nine levels Shank (and Carina in one instance) must stab, shoot, and pummel every opponent he comes across in order to rescue the people he cares most about. As the game progresses you'll earn more weapons and unlock more characters & costumes depending on the achievements you attain. 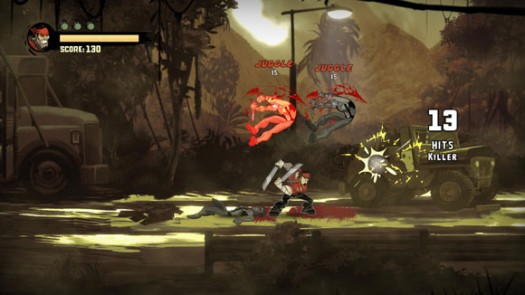 For the most part the gameplay is relatively the same as the first Shank title. The controls are just as they were in the first title, and the enemy mechanics are as similar as they were before. One new thing to the single player mode is the ability to pick up some of your enemies' weapons. Unfortunately those weapons are limit to those you can smack others with; you cannot pick up guns, with the exception of a grenade launcher in the final level. Some areas have interactive weaponry such as saw blades, elevators, and car lifts, but these areas are very few and far in-between. Almost each of the nine levels has a boss battle, many of which offer a good challenge, although battling Magnus in the end is more frustrating and takes away some of the fun of the game.

One of the key differences in Shank 2 is its overall look. While it still retains the cel-shaded cartoonish appearance the graphics are much more detailed and have more of a serious aspect than the somewhat humorous one found in the first game. Bloodshed still flows wonderfully, and the character animation still has great fluidity in it. Also on par are the cutscenes, which have been animated using some great Flash techniques. Maybe one day we'll be treated to a Shank cartoon on [adult swim], but the beat-em-up styles of our hero are still too similar to that of Brock Sampson to have that happen anytime soon. 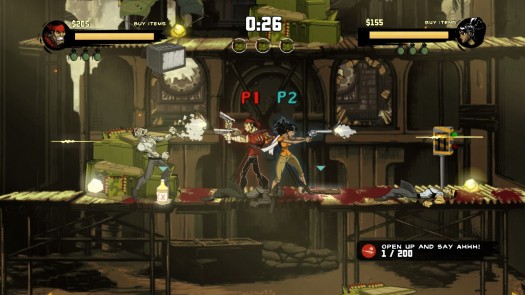 One of the downfalls of Shank 2 is that it is noticeably shorter than the first one. I was able to beat the game in under five hours on Normal mode, about an hour and a half less than it took for me to beat the first Shank. Also absent is a great co-op Adventure mode, which made the first one's replay value skyrocket. There is a co-op Survival mode that you can play with a friend or another gamer online. In it you must protect three sets of supplies from being destroyed by bombers. If a bomb is planted you only have a few seconds to disarm it, but ongoing enemy attacks make it harder than you'd think. You can call backup to help you out, as well as use nearby traps to eliminate the bombers more swiftly. While Survival is loads of fun, it still lacks the punch of the original co-op Adventure.

Shank 2 is an improvement over the first one, but not by much. While it plays and looks better, there really isn't anything we haven't seen before. Those who liked the first Shank game will enjoy themselves with the sequel; those who weren't are better suited to look elsewhere for their side-scrolling beat-em-up needs. At least it's priced right (800 MSP or $9.99).