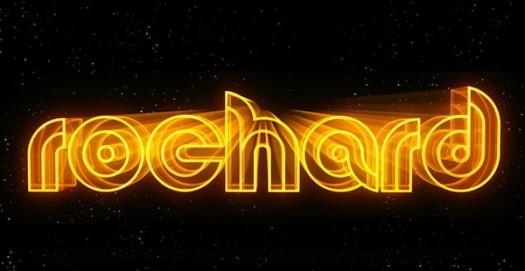 Once in a great while there comes a game whose protagonist represents the average guy just doing the right thing to get by. Sometimes the developers get it right, whereas other times they jump the shark and make the hero too strong to symbolize a regular person's strengths. Rochard, the first game from Recoil Games, takes the everyman approach, puts it in space and gives us one hell of a ride.

The game follows John Rochard, an astro-miner with a heart of gold and a wallet near empty. While working on a job for Skyrig Corporation he and his team discover an ancient structure hidden within an asteroid, and as soon as this discovery unravels space bandits invade the work area. From there John must use his lifting and firing skills to take on bandits evil gadgets in order to save his friend and co-worker Skylar, and protect the alien artifact from being used by the wrong hands. 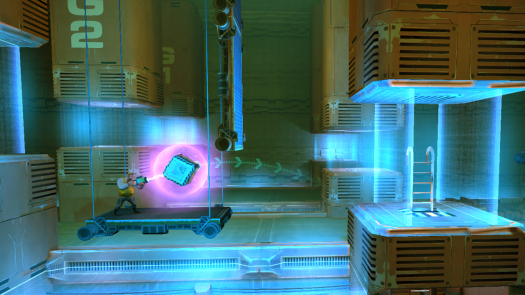 Throughout the five levels of Rochard you must control your character through various puzzles that are keeping you from reaching the next room or area. Within these levels will be boxes, cubes and other sorts of items that will be in your way, but fortunately your gravity gun will be able to pick these items up and either put them to the side or be piled up on top of one another to make a stepping stool to reach high areas. You can control the room's gravity by holding down the L1 button, which will come in handy for those lengthier jumps, and later use it to swing from cube to cube to reach the top of a level. On occasion you will find space bandits there ready to take you down, and that's where the real fun in Rochard begins.

To defeat your enemies you can either do it the easy way via shooting lasers, or you can do it the more exciting way and use the many techniques available for your gravity gun. By picking up a nearby cube or robot enemy you can fling it at your opponent and hear him scream as he is whacked in the face with it. The environment around you can also play into hand for defeating your enemies. Say you have a couple of bandits chasing you on a light bridge that's over an electric field. By plucking the power surge from its holder you can watch the bandits plummet to their shocking deaths. You can also use your bombs, as well, with the bandits' effeminate cries of pain adding onto the humor of the game. 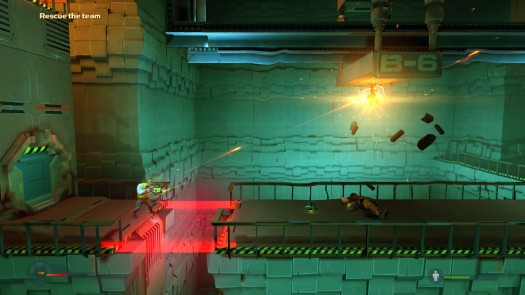 The puzzles in Rochard range from the ridiculously easy to the insanely difficult, with enemy AI almost at every corner to increase the challenge just a tad. One of the more difficult areas of the game comes in the form of self-poisitioning lasers. Using the gravity gun you must angle the lasers properly and tiptoe through without being hit by one (which causes instant death). These puzzles at first seem largely difficult to figure out, but with some sleuthing and a careful eye the solution will appear to you. Just don't think that said solution will have you reaching the next room any quicker, as the time it takes to finish each area of the level can range from seconds to almost ten minutes.

One cannot talk about Rochard without mentioning the sights and sounds of the worlds. Using the Unity engine the folks at Recoil Games managed to create its settings with shining cartoonish beauty. The space casino, where players meet Skylar's uncle Floyd, is a character all in its own, thanks to its bright lights, loud music and engulfing environments. Music from Poets of the Fall's Markus “Captain” Kaarlonen (who helped a bit with Alan Wake) also helps to create the true essence of John Rochard (who happens to be voiced by none other than Mr. Duke Nukem himself Jon St. John). The twangy guitars and convoy-influenced melody of "Grinder Blues" sets itself up to be one of this year's best songs coming from a video game. 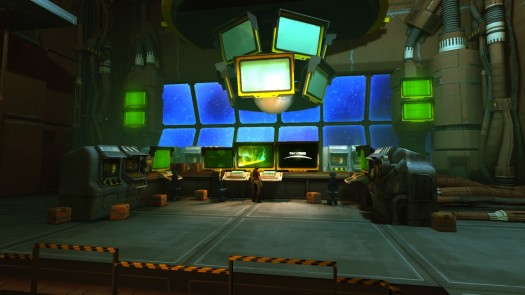 Depending on how good you are with puzzle games you can find yourself completing Rochard the first time around in about seven hours, a good amount of time for a $10 game. While there is much replay value in the game (especially when trying to collect the three-hour completion achievement) once the game is over there are no other modes to play in. The lack of co-op or multiplayer modes, not to mention no way to show off your times via online scoreboards to compare with other players with, might turn some gamers off, but in the case of Rochard it's about the all-around experience and story of the game, which there is much to love. (SPOILER ALERT!!!) Just be prepared to be irked with its cliffhanger ending, which will hopefully lead its way into a sequel.

Rochard is the type of puzzle game that will have you smiling from start to finish, whether it'll be for the ways you can defeat your enemies or the overall puzzle-solving experiences you'll be facing. It's fun, accessible and -- most important of all -- an innovating experience that gamers will cherish for years to come. Recoil Games have made one impressive debut in the video gaming world, and with a title like Rochard topping their resumes you can bet that more great titles will emerge from them in the future. Let's just cross our fingers that Rochard 2 isn't too far down its to-do list.

Episode CXV: Only The Good Die You...