If you thought dealing with the Japanese mafia was bad, wait until you have to associate them with the undead.

Today SEGA has announced that the Japanese PS3 game Yakuza of the End will be given a US release in March of 2012. Retitled Yakuza: Dead Souls the game will have the classic characters brought back to Kamurocho to fend off demons and zombies that wish to destroy all that they love about the red-light district. Like Yakuza 4 this game will focus on the storyline through the eyes of four of the more popular characters in the series. 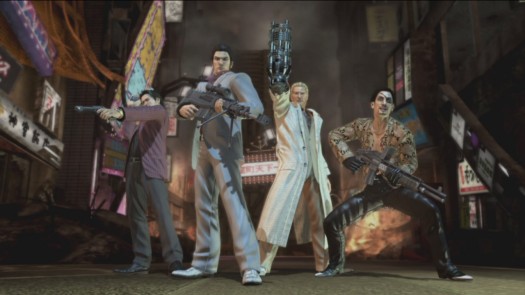 Yakuza: Dead Souls will also be the first Yakuza title that will feature gunplay, something most fans of the series have been clamoring for. Weaponry such as pistols, machine guns and rocket launchers will be at your disposal, though it is best to save the bigger ammo for the more tougher zombies and mutants that you'll be facing. The American release will feature the full game, the all-new mini-game Pachislot, as well as DLC content that has yet to be announced.