HomeVideo GamesGet Any "Engine" Running For Some Hardcore Kart Racing!

Get Any "Engine" Running For Some Hardcore Kart Racing!

Get Any "Engine" Running For Some Hardcore Kart Racing! 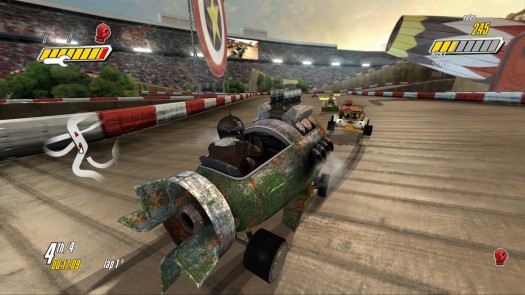 Finding those little-known titles that have the chance to make it into the hearts of gamers and critics alike is one of the many great things about going to a video game convention. Today I came across one such game: Autumn Games' Jimmie Johnson's Anything With An Engine, a racer that is bound to bring smiles and giggles on all three consoles.

The demo I got to try out at PAX East today featured a couple different karts to try out, but one in particular (the rocket) made me think nostalgically about Rocket Jockey, one of my favorite PC titles from the mid-90s. Naturally this was the one I had to play as, and as soon as the race began so did the madness. Like Mario Kart you are given the opportunity to knock out you opponents with a vast amount of weapons and power-ups, ranging from missiles and mines to something more in the lines of electrocution, not to mention some speed enhances as well. There are also road hazards that come in the forms of either police vehicles and tidal waves, and hitting these will also affect your overall racing score. The demo I tried had me go five laps, and miraculously I somehow got second place. I don't know how I did it, but perhaps I just used my arsenal at the proper time.

The game will have three specific modes: Career, Single Play and Multiplayer, with the latter feature four-player split screen and eight-player online racing. On top of that there will be specific racing styles with their own twists. One of the modes that was revealed to me was "Matador," where racers race each other in opposite directions, in a vein that can be thought of as a game of Chicken. More will be revealed as the game gets closer to its release date, though one can bet that Anything With An Engine is going to go all-out to make sure it's no run-of-the-mill racer. 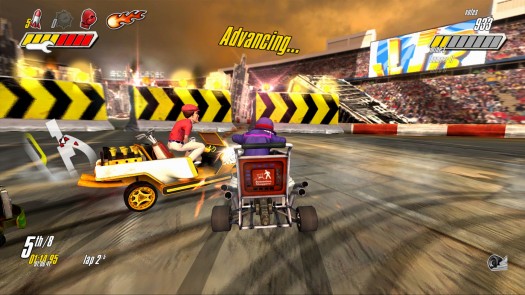 According to Autumn Games' Executive Producer Gene Bahng, it was Jimmie Johnson himself who came to them about making a video game.

"He's a very big gamer," said Bahng, "and one of the games that keeps coming up for him was Mario Kart. For him and a bunch of older men sitting around in a trailer playing Mario Kart, it's a little embarrassing. He wanted to create something that was on the same level of fun, but more age-appropriate for a slightly older audience."

As for how the game stands out, Bahng says it's all about its character and the driving dynamics.

"Jimmie is one of the best partners I've ever worked with," said Bahng. "He gets gaming, he gets racing. He had a lot of input on how the cars should handle and how the tracks were designed. You're getting a game that's designed and assisted by one of the greatest racers of our generation...The controls are really tight, but at the same time accessible. He wanted this to be a game that was challengeable enough for more mature gamers, but still accessible enough that you can play with your kids." 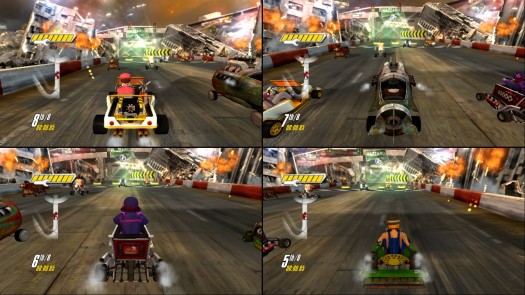 Anything With An Engine has a Summer 2011 release date as a download title on the Xbox Live Arcade and PSN, and a physical release on the Wii. If what I saw today is any clear indication, this is one title to really look out for in the near-future.

Check out my full interview with Autumn Games' Executive Producer Gene Bahng here! Also watch the trailer below to witness the madness that is Jimmie Johnson's Anything With An Engine!

“Brink” On Through To The Other Si...