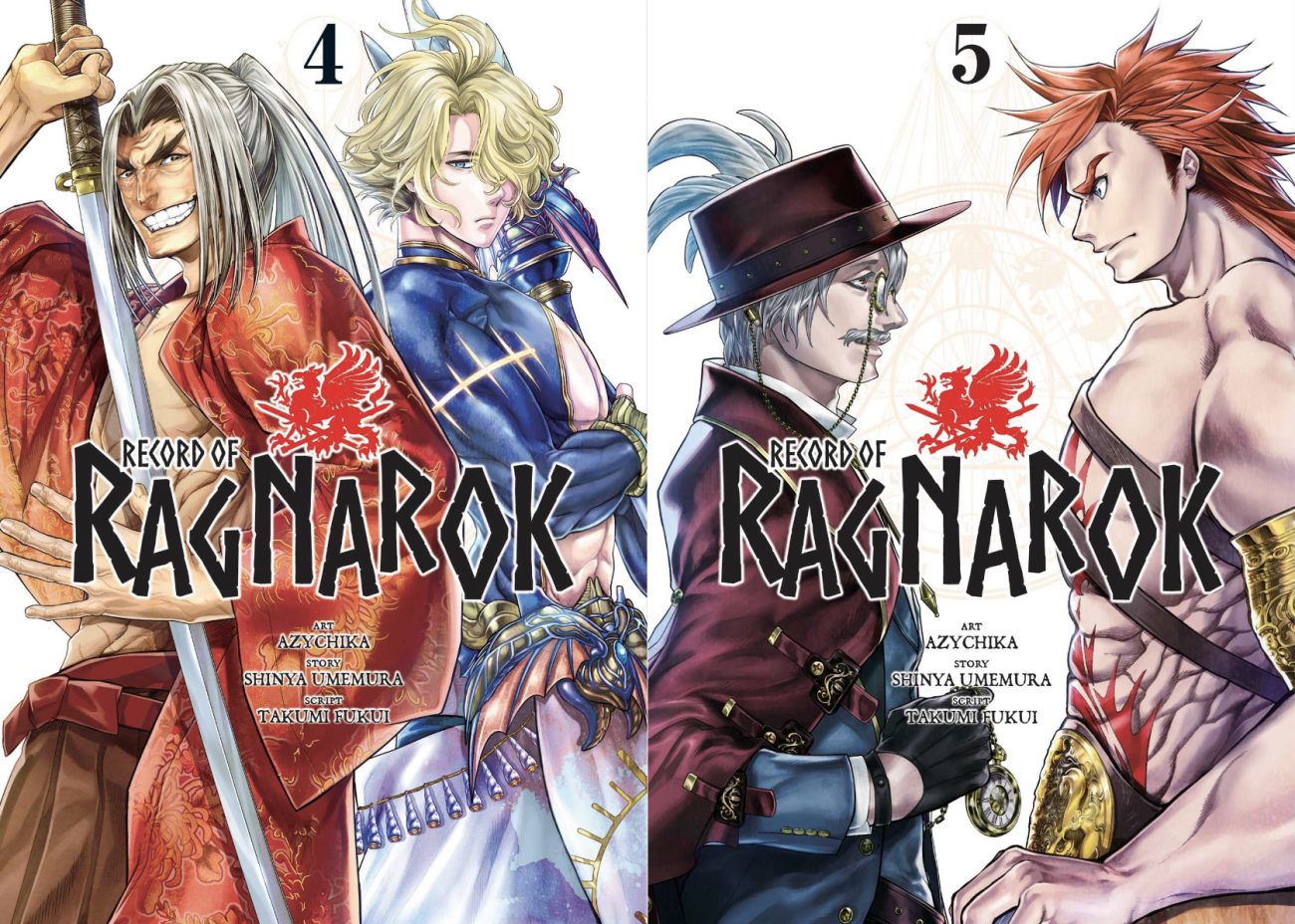 How can the world’s biggest loser come out on top? It’s a question that races through the spectators’ brains during the fight between Poseidon and Sasaki Kojiro. While the god has won many a battle, the samurai is known more for chalking up one loss after another. Yet in Record of Ragnarok’s fourth and fifth volumes, readers will know why Kojiro has kept moving forward without a single chip on his shoulder.

As the audience watches the fight, both Poseidon and Kojiro’s back story is presented. From Poseidon’s perspective, we see a man who has tasted victory without the bitterness of failure. Perhaps his most impressive feat was killing a god (his brother Adamas), and making his existence vanish from almost everyone’s memory. But because he’s never lost a battle, Poseidon appears to never have gained anything from his wins. 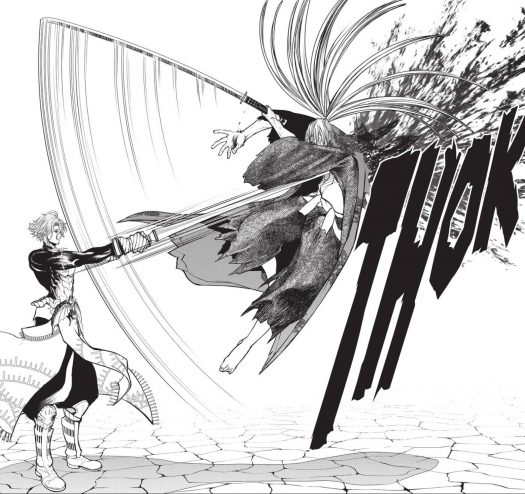 That’s why Sasaki Kojiro winds up being a far better competitor than his god counterpart. His story is all about losing in order to gain knowledge. From fighting fellow samurai to becoming one with nature, Kojiro learns how to best even the toughest opponent. But his past challengers never got to have a proper rematch, as a mere look into Kojiro’s eyes is all it takes to know that they won’t win a second time.

It’s a concept that speaks many volumes in Record of Ragnarok. To lose is to learn; to win is to self-gratify. While both have their merits, defeat means there’s still plenty to learn on the path of life. Simply winning over and over again is soul-numbing, a feeling that one can see in Poseidon’s glossy-eyed face. He gets zero satisfaction with his wins, whereas Kojiro gains more enlightenment with every loss he’s given. Because of this, Kojiro is the one who looks the more intimidating in battle. 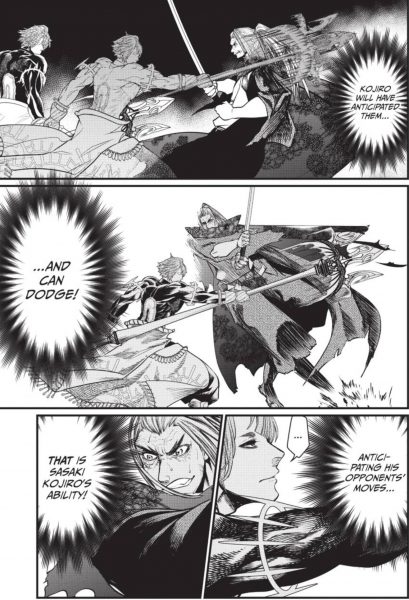 With that being said, Poseidon isn’t a pushover in the slightest. His attacks give Kojiro a run for his money, as he uses all of his energy to evade and defend himself. Kojiro can barely get a scratch on Poseidon’s body, whereas Poseidon uses his techniques to perform godly attacks. Yet it’s Kojiro that’s smiling the most during this battle, as every hit he takes is another note to take. Even when it looks like he’ll be forced to concede, Kojiro finds a way to surprise even the biggest gods.

Suddenly, one mighty weapon becomes two, and Kojiro and Poseidon throw everything they have at one another. But when the dusts settles, it results in a victory that takes both humans and gods by surprise. All it takes is a reminder of why these competitors are not only battling to the death, but why they aim to keep getting stronger as the years go on. It’s a display of heroism, willpower, and beauty in ways that only Record of Ragnarok can. 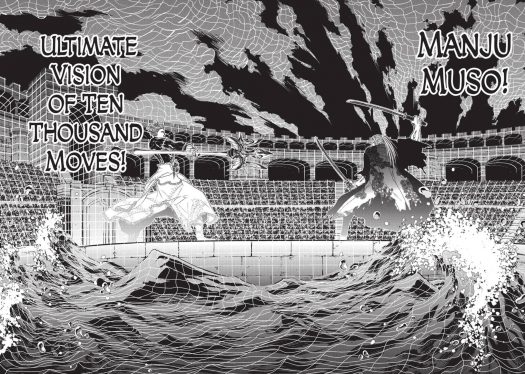 However, now that the gods realize what sort of competition they’re actually dealing with, they now must put on their true game faces. Brunhilde’s brother Heracles is next on the gods’ side, whereas humanity must choose a fighter who’s the polar opposite of him. And there’s no better choice than one of the greatest monsters the human race has ever spawned, one whose identity not even Sherlock Holmes could figure out. His name: Jack The Ripper!

For the first time, even the humanity side is conflicted when Jack and Heracles face off. Although it’s for the fate of their existence, the notorious murderer feels like a greater threat than the gods themselves! It takes some mind games from the killer to reveal his true side, as he and Heracles battle in a faux 1890s London stage. Even when Heracles aims to end things peacefully, Jack’s gentlemanly mantra keeps him on the side of declaring war! What happens next, well… 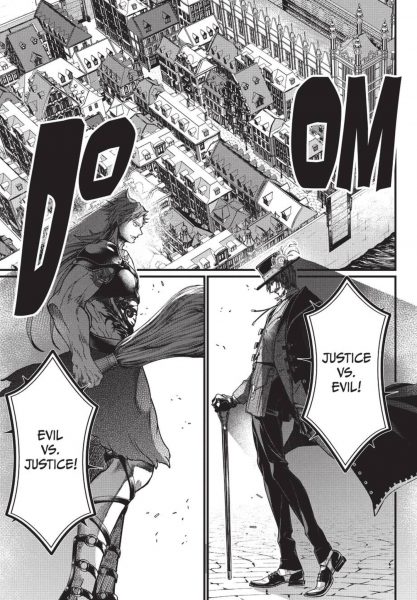 Volumes Four and Five of Record of Ragnarok showcased a hell of a battle between Poseidon and Kojiro. There’s a level of joy to be found when watching a historic failure intimidate the King of the Sea. But that’s what’s made this manga so enjoyable: it relishes on the art of the surprise. But now with Heracles facing off against Jack The Ripper, it is now forcing its readers to choose to root for their own demise! And that, readers, is why Record of Ragnarok gleefully grins with a diabolical look in its eyes whenever readers start turning the pages!