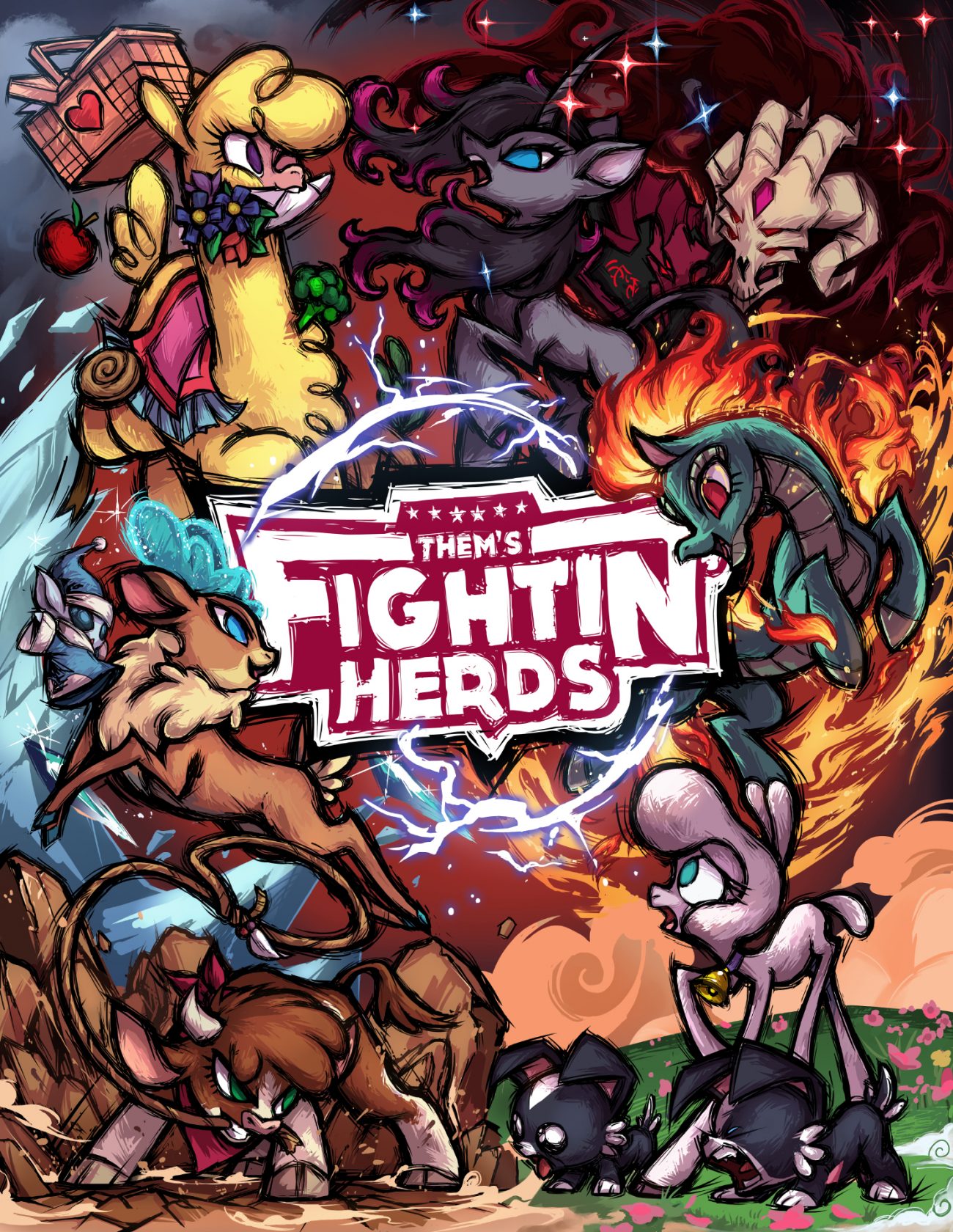 It’s fascinating to think of how far Mane6 has come with Them’s Fightin’ Herds. Originally a tribute game to My Little Pony: Friendship is Magic, the team had to scrap those plans when Hasbro served them a cease-and-desist. However, series developer Lauren Faust offered her input on the game, and it was revamped with new characters and a new title. Now out for consoles, does Them’s Fightin’ Herds deliver a battle that everybody can get behind?

Players can take control of seven four-legged fighters as they battle via local, online, or arcade single-player. The characters (which are fairly easy to guess which MLP pony they originally were) range from reindeer and alpacas to sheep and unicorns. The main star of the game is Arizona, a cow with a lot of determination. In Story Mode, gamers take control of her as she seeks a key that’ll help protect the world from predators. 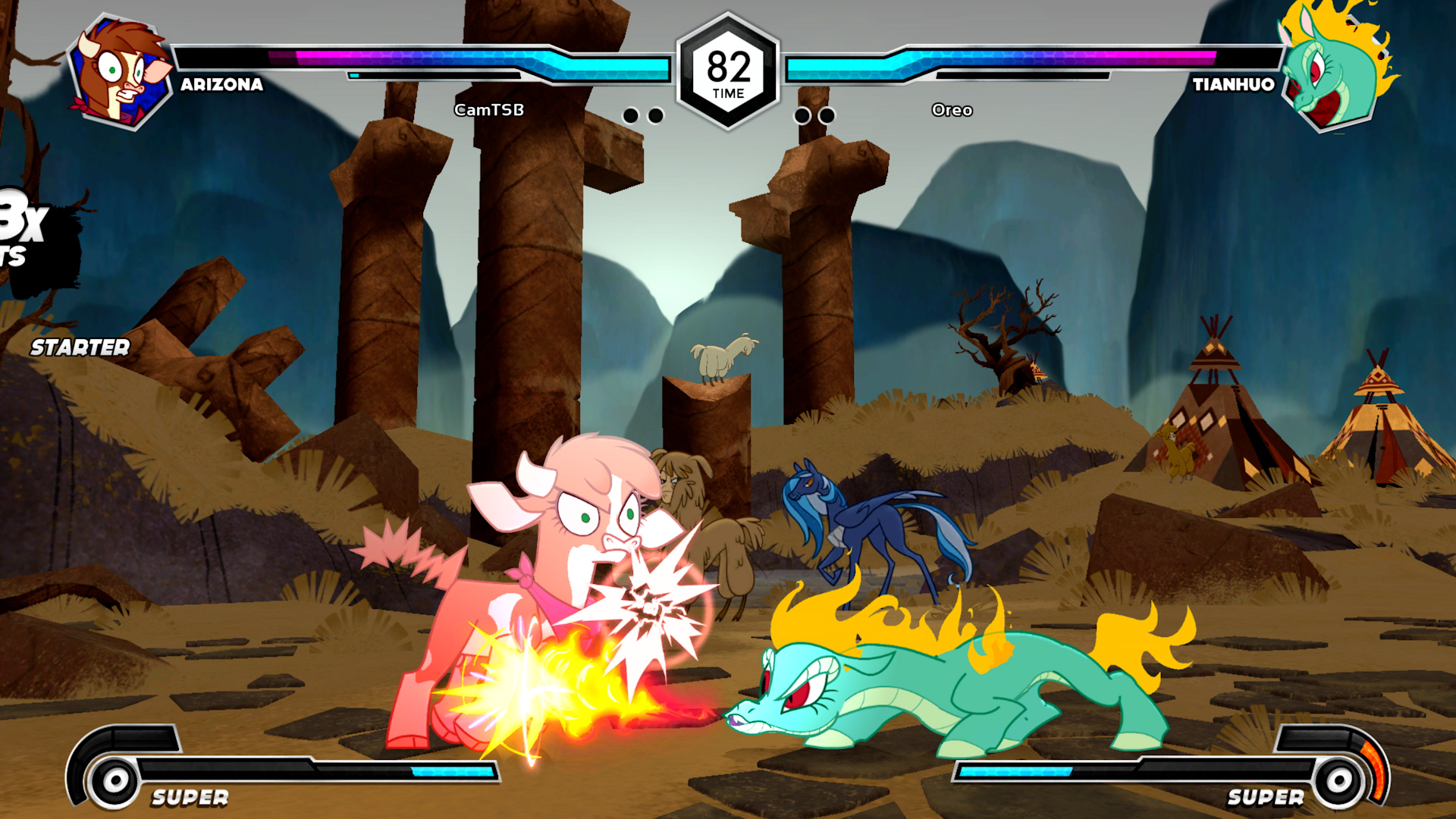 One of the big surprises about Story Mode is that it doesn’t go down the same route as either Street Fighter or Mortal Kombat. Instead of cut-scenes and non-stop fighting, Them’s Fightin’ Herds presents Arizona’s story via a top-down RPG game. When enemies arrive, the game switches to the traditional fighter, only to switch back when the enemy’s been defeated. Throughout the deserts, mountains, and snowy lands, players will also have to solve puzzles and find clues as to where they’ll need to go next.

There’s a lot of heart and brains placed in the narrative, and while there’s animal puns a-plenty, it won’t make your eyes roll. Instead, they build on the lore of this animal world, bringing forth a surprising amount of character depth. From worried parents to bratty rivals, the people that enter and exit Arizona’s life in the game have plenty of depth to them. It also helps that the narrative has a good sense of humor, be it a visual gag or a little nod to a certain classic Cheech & Chong routine. 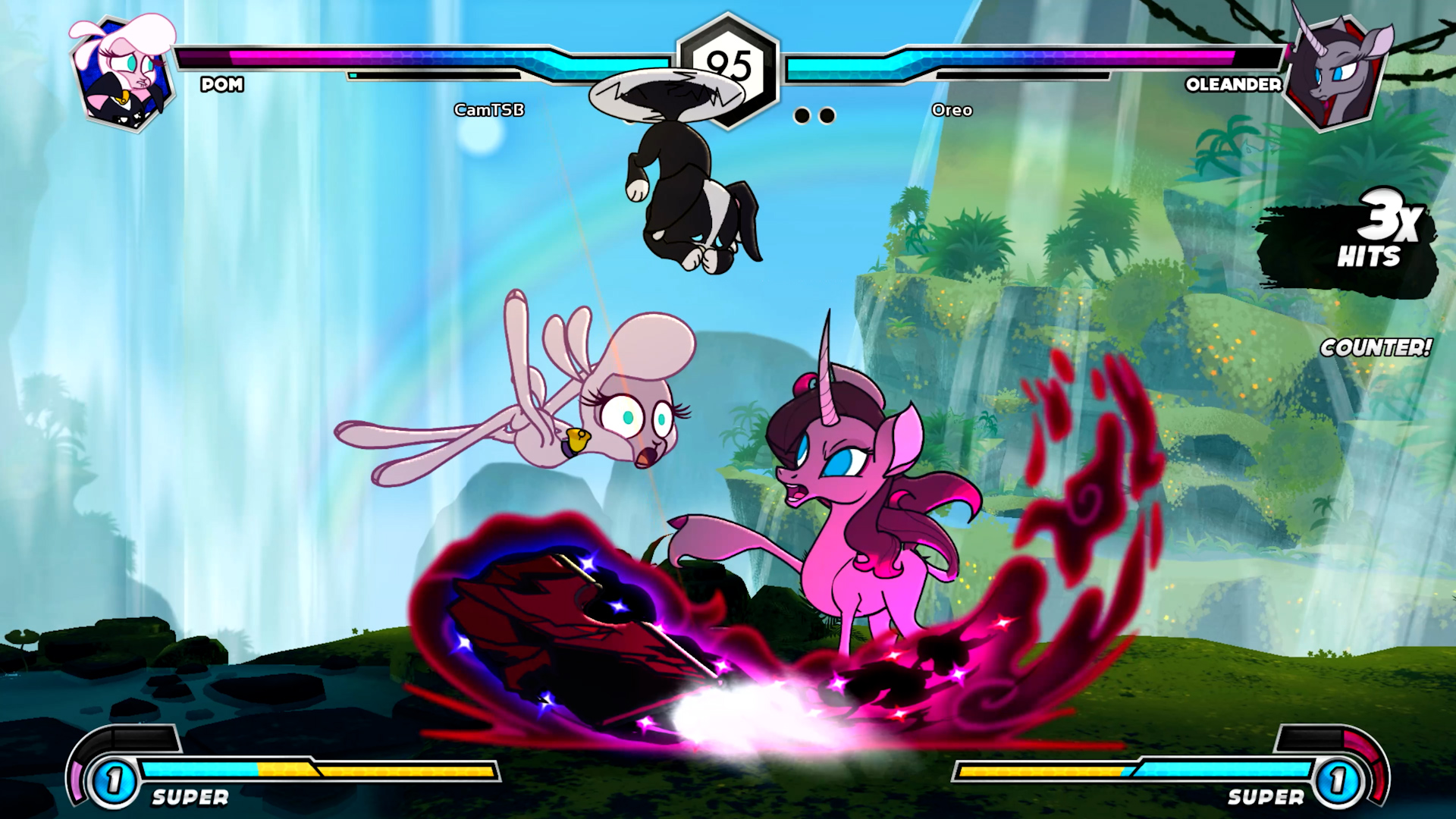 However, the only downside with Story Mode is that it’s still incomplete. With only the first chapter released as of this review, the game ends on a cliffhanger that’ll leave players wanting more. Sadly, with Chapter Two still in preproduction (which will follow the reindeer Velvet), we won’t know when it’ll release. Thankfully, they’ll at least be coming free of charge when the time comes.

Thankfully, players will no doubt stick around for the battles in Them’s Fightin’ Herds. No matter who you play as, its four-button system makes for a great fighter for those who are new to the genre. Performing combos, grabs, throws, and other techniques comes pretty easily. With that being said, attempting to double-jump can be a pain, especially in levels (specifically in Story Mode) that require you using it to reach the next area. 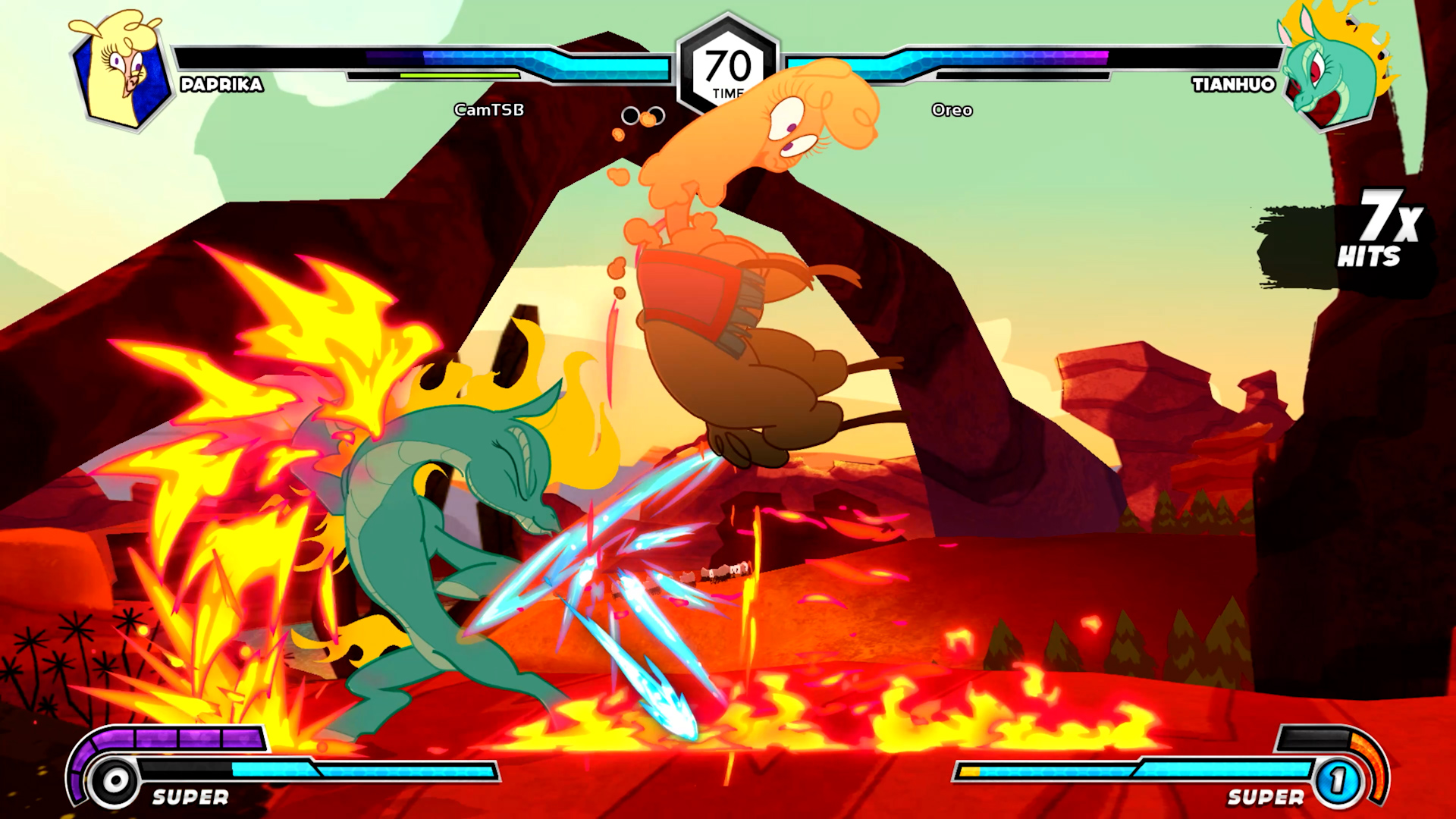 The visual aspect of the game is a real highlight. Its hand-drawn characters feel right at home alongside many a Saturday morning cartoon. Each punch, kick, and special attack is showcased with beautiful detail, as the fights go on with smooth animation and little-to-no lag. (Depending on your internet connection in online mode, there can be a little slowdown here and there.)

Although the seven playable characters are fun to play with, it’s hard not to feel disappointed by that quantity. Other characters will be added via a Season Pass system, but — just as with the story mode chapters — no words on when those will be released. For the time being, at least be glad that we were given seven UNIQUE characters rather than a plethora of clones like most fighter games tend to do. 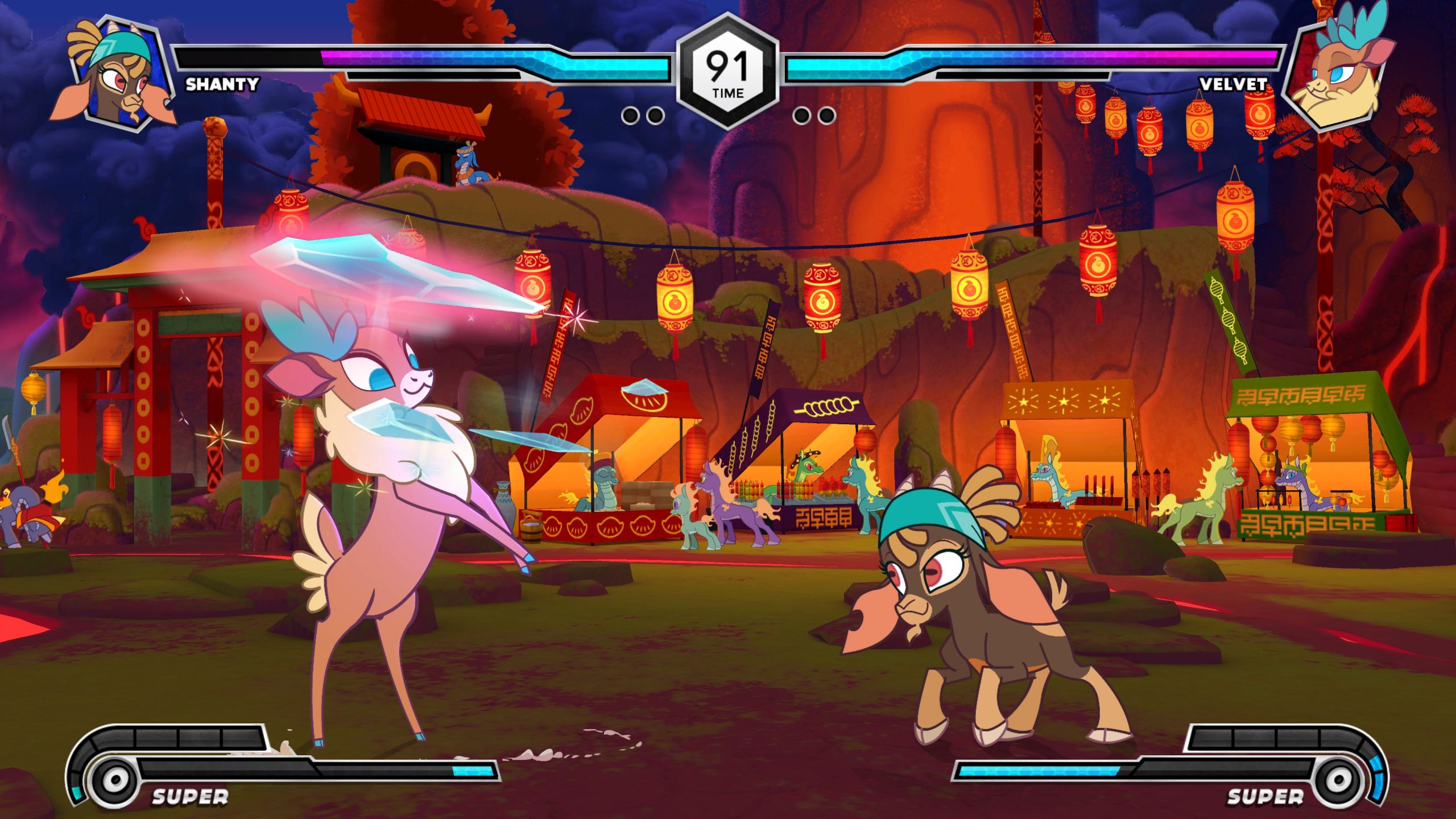 Outside of the regular online fighting mode, players can also dive into the Salt Mines for some co-op treasure hunting. As enemies are defeated, the difficulty increases, making for a good challenge overall. Play & survive, and you’ll earn Salt, the game’s currency, which can be used to buy new outfits and the like for your lobby character.

Them’s Fightin’ Herds has had a long road towards completion, but it has resulted in a solid fighter for all ages to enjoy. Although the character count isn’t high, what is offered has enough personality and uniqueness to keep players entertained. With its solid controls and great online mode, Them’s Fightin’ Herds has enough pow in its hooves to keep the fighting community filled with magic and joy for years to come!