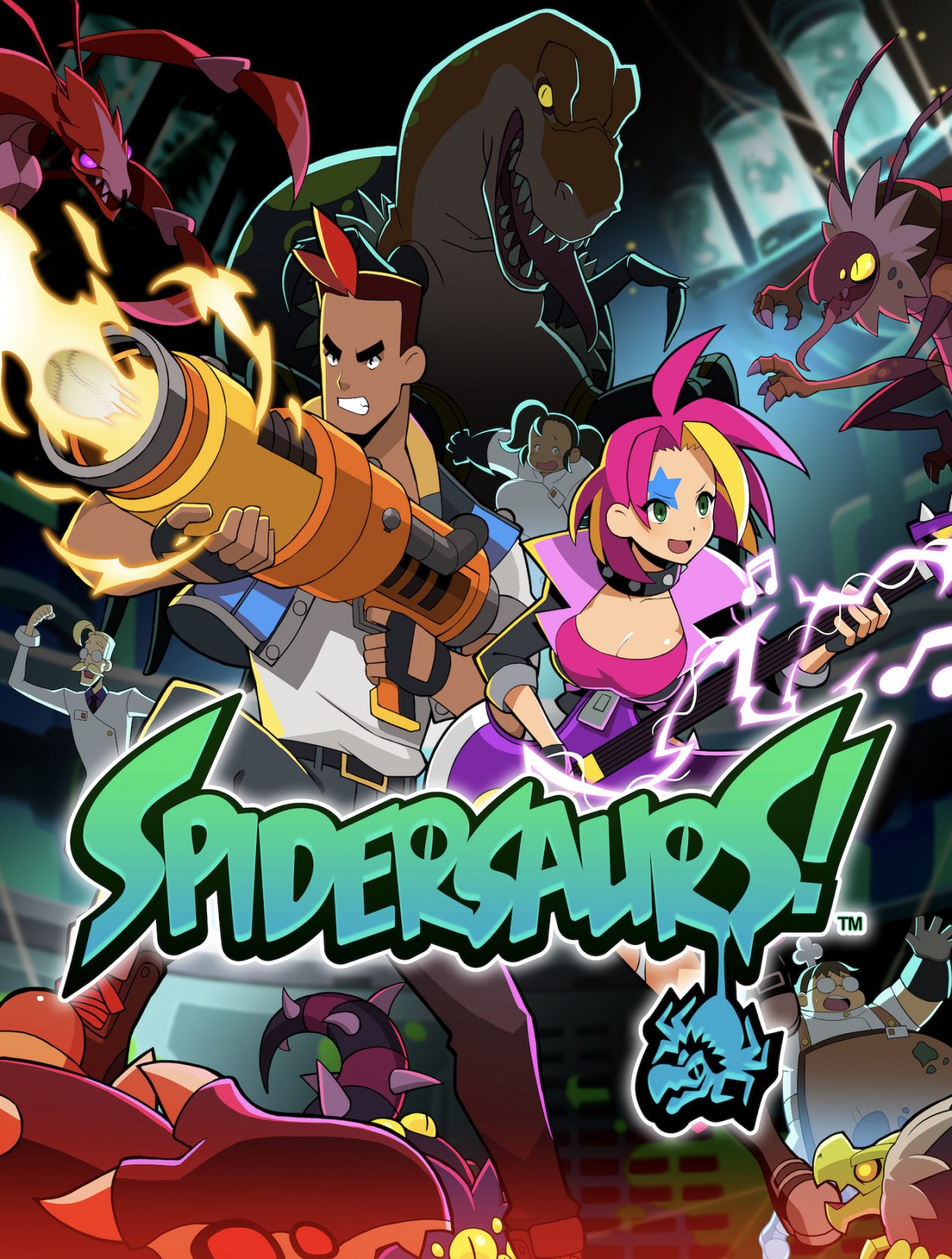 There was nothing like finding a cartoon gem in the world of syndication. While Saturday mornings were made for the big leagues, the weekday afternoons were where the cartoon anomalies came out to play. From Samurai Pizza Cats to Conan the Adventurer, the legit best cartoons came from those that were too weird for ABC or CBS’s kids blocks. That’s what Spidersaurs! is: a nod to those wonderfully weird concoctions. But is it fun?

As the name implies, Spidersaurs! focuses on dinosaur-spider combinations that have wrecked havoc on its creators: the InGest Corp. Originally made to end world hunger, the arachnid reptilians are now taking over and threatening to destroy everything in their way. That’s when InGest Corp’s puts its trust in two former taste-testers: the buff cop-in-training Adrian and the sexy punk-rocker Victoria. Together, the two shoot their way through the behemoths to, erm, save the company before it becomes an evening news bulletin. 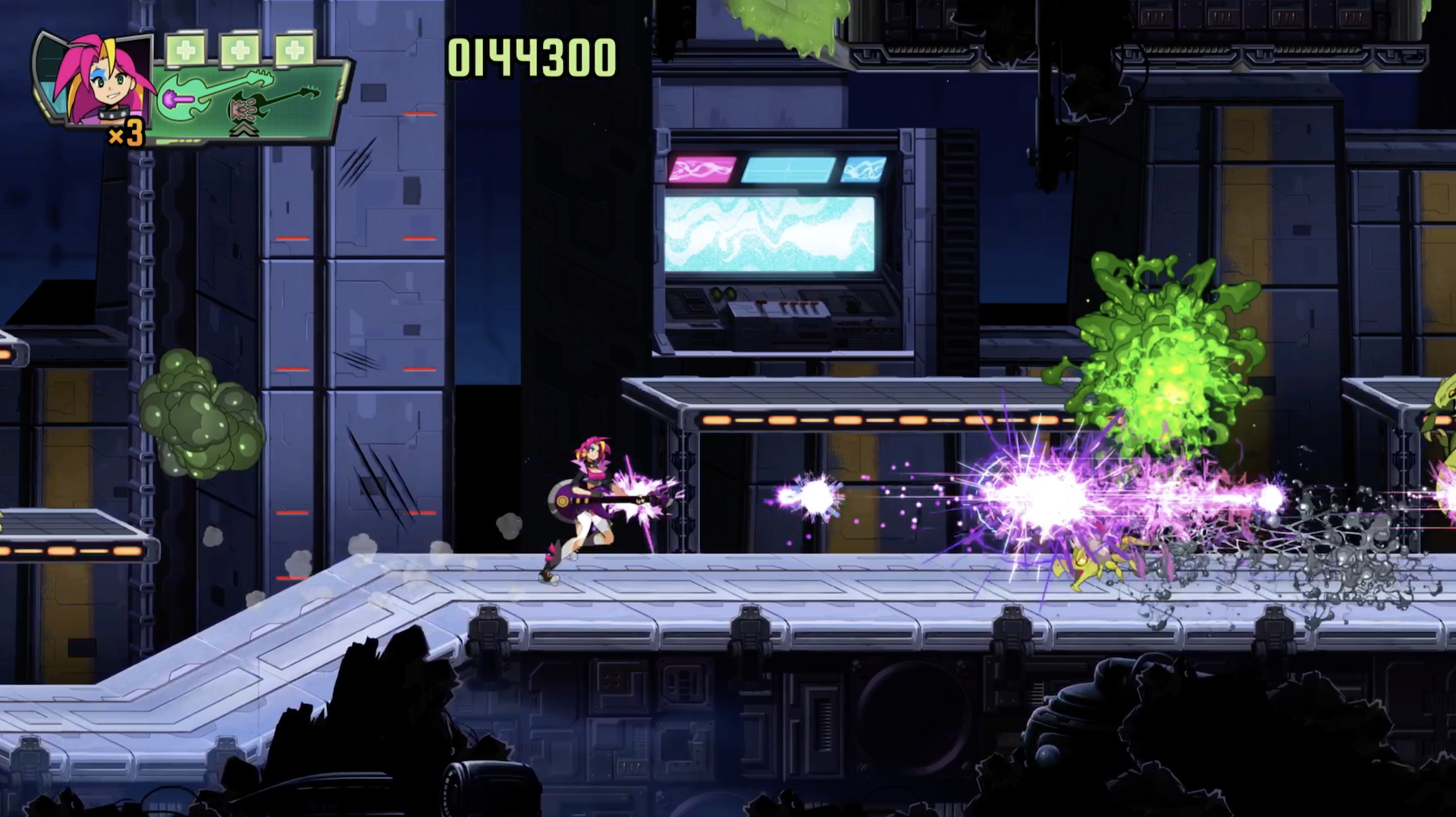 Taking place through six stages, players (either in single or co-op) must run-‘n’-gun their way through jungles, icy caverns and even volcanoes to destroy the Spidersaurs. As the game progresses, both Victoria and Adrian earn new maneuvers that’ll assist them on their quest. Sometimes you get something simple like a double-jump; but then other times you get grappling hook powers! All of these wind up being helpful in the fight to save humanity, as well as — most importantly — the finances of the boardroom honchos of InGest Corp.

The humor of Spidersaurs! comes from its overall plot. Having a major corporation forcing someone else to clean their mess is…well, it’s sadly true to life, let’s be real. Nowhere do the scientists that created the dino-spider hybrids show any sympathy for the innocent people. Instead, it’s all about profit, profit, profit, and it’s clear that Victoria and Adrian know this. However, like most people wanting to earn good money, they suck it up because hey, it’s at least better than working retail! 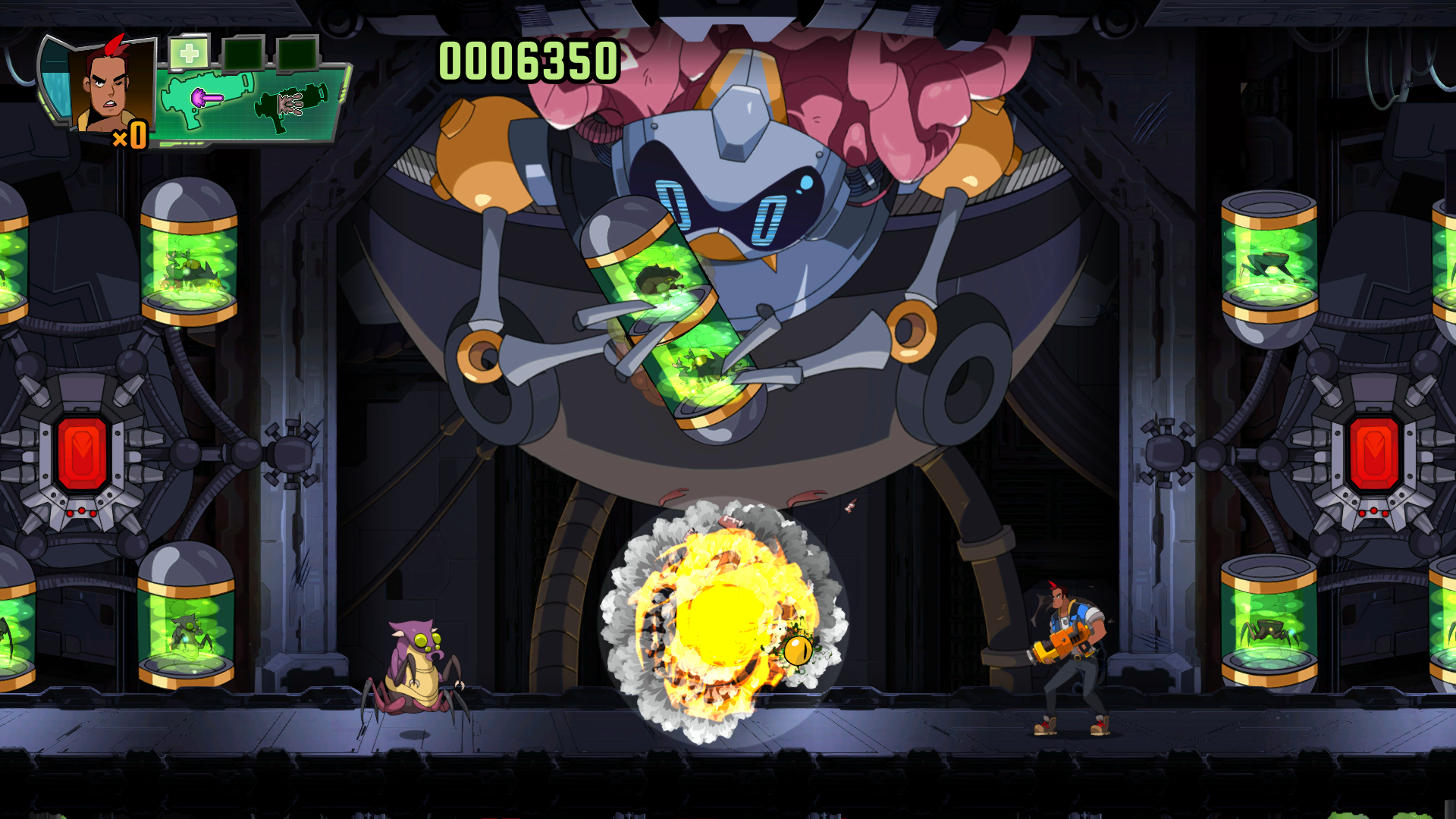 Fortunately, both heroes have quite a good arsenal on-hand to deal with the creatures. Spread guns, electric balls of fury, and point-blank lasers offer plenty of firepower to take down these prehistoric web-slingers. But it’s finding the right weapon at the right time that makes all of the difference, as some don’t offer as big a boom as others. It’s all about knowing when to grab what’s been dropped or simply skipping over it because you like what you already have.

And what’s the point of having a strong weapon if you don’t have strong enemies to use them on? Spidersaurs! gives players a great mixture of baddies that are unlike anything you’ve seen in a WayForward game. From winged raptors and web-shooter T. Rexes to burrowing gators that throw junk at you, these creatures bring something unique and imaginative to a prehistoric creature that’s had one too many Jurassic Park movies these last few years. But the toughest are saved for the boss battles, which will give many gamers a run for their money. 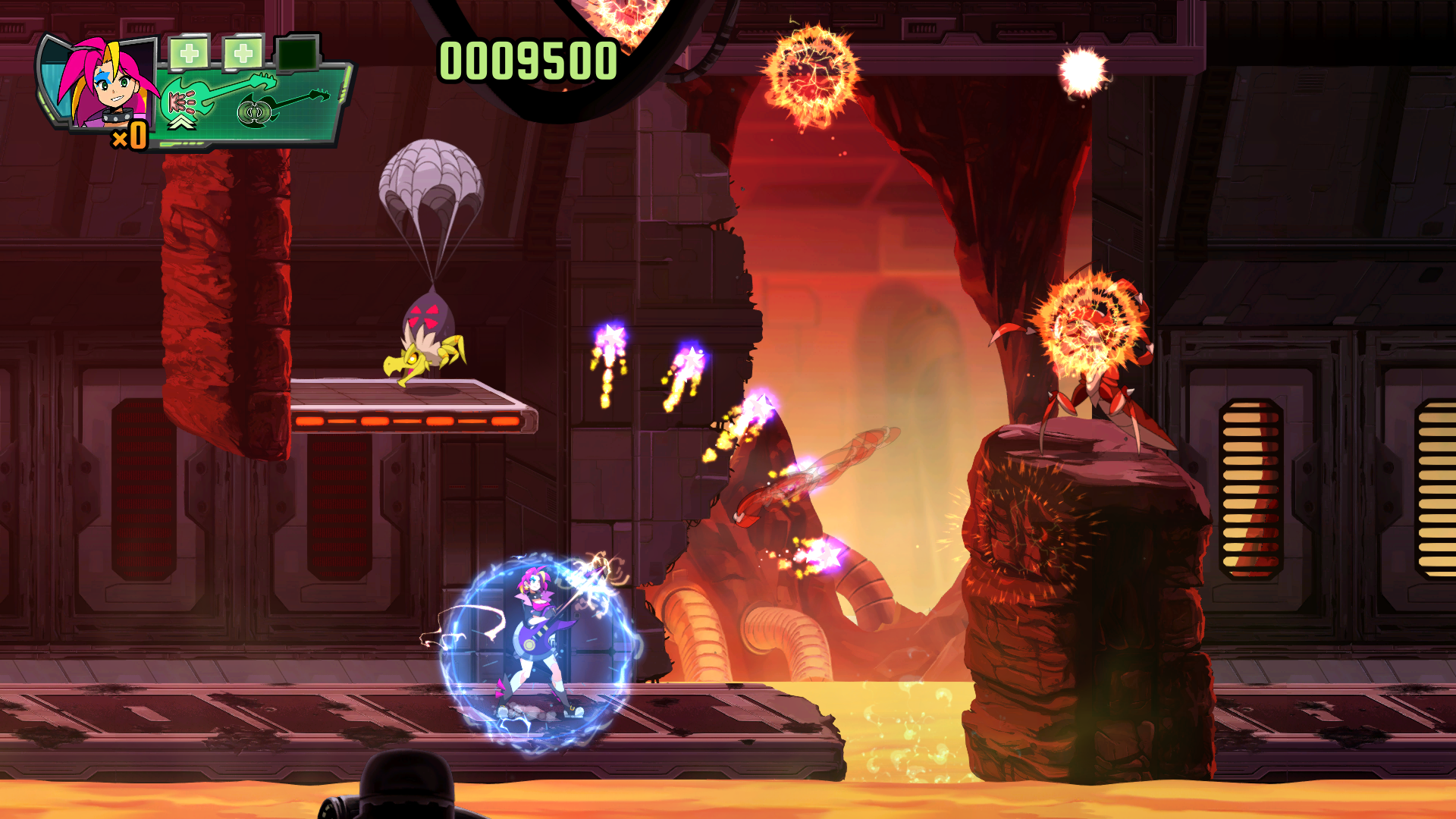 Perhaps this is where one of the biggest flaws of the game comes in. Spidersaurs! offers plenty of challenges, but sometimes they tend to be thrown at the player all at once. As such, it can get a little overwhelming to fight the enemies off, to the point where you’ll see your lives quickly dwindle down to zero. Although there are checkpoints, they only pop up halfway through each level, meaning dying close to the boss battle means having to go all the way back to the midpoint.

Maybe this is why this game is better suited as a co-op one. Even though there’s fun to be had playing single-player, there are areas where trying to fend off the evil hybrids can feel impossible. Teaming up with a friend on couch co-op, on the other hand, offers more fun and less frustrations. As such, the enjoyment level of Spidersaurs! rises when you have a friend in tow, rather than trying to face it head-on solo. 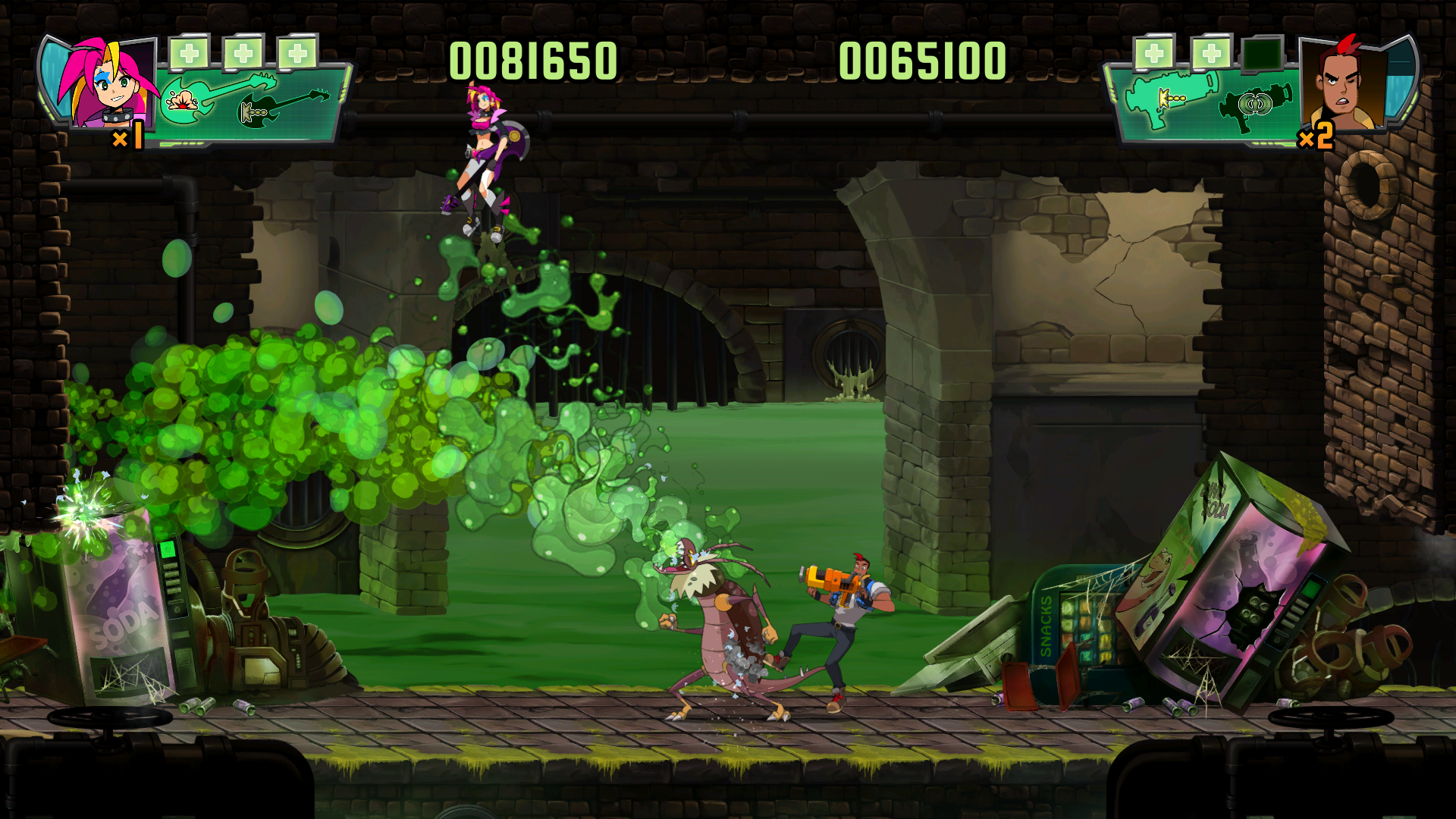 Its difficulty can also be due to the game’s length. Since there are only six levels to play through, it’ll take you roughly 90 minutes to beat it if you don’t die. However, with the game having retro difficulty, completing the game solo can take up roughly 3-4 hours to do so. Thankfully, completing the main story mode will unlock Arcade and Speedrun modes, which add both nostalgic and modern elements that add to the overall experience.

Spidersaurs! brings me back to a time where I rushed home from school to watch my favorite cartoons. It’s not a perfect game, but it offers enough weirdness and hilarity that make it stand out from the rest of the pack. Where other cartoonish video games try their best to be Saturday Morning-tier, Spidersaurs! is comfortable being the Stunt Dawgs of its genre.