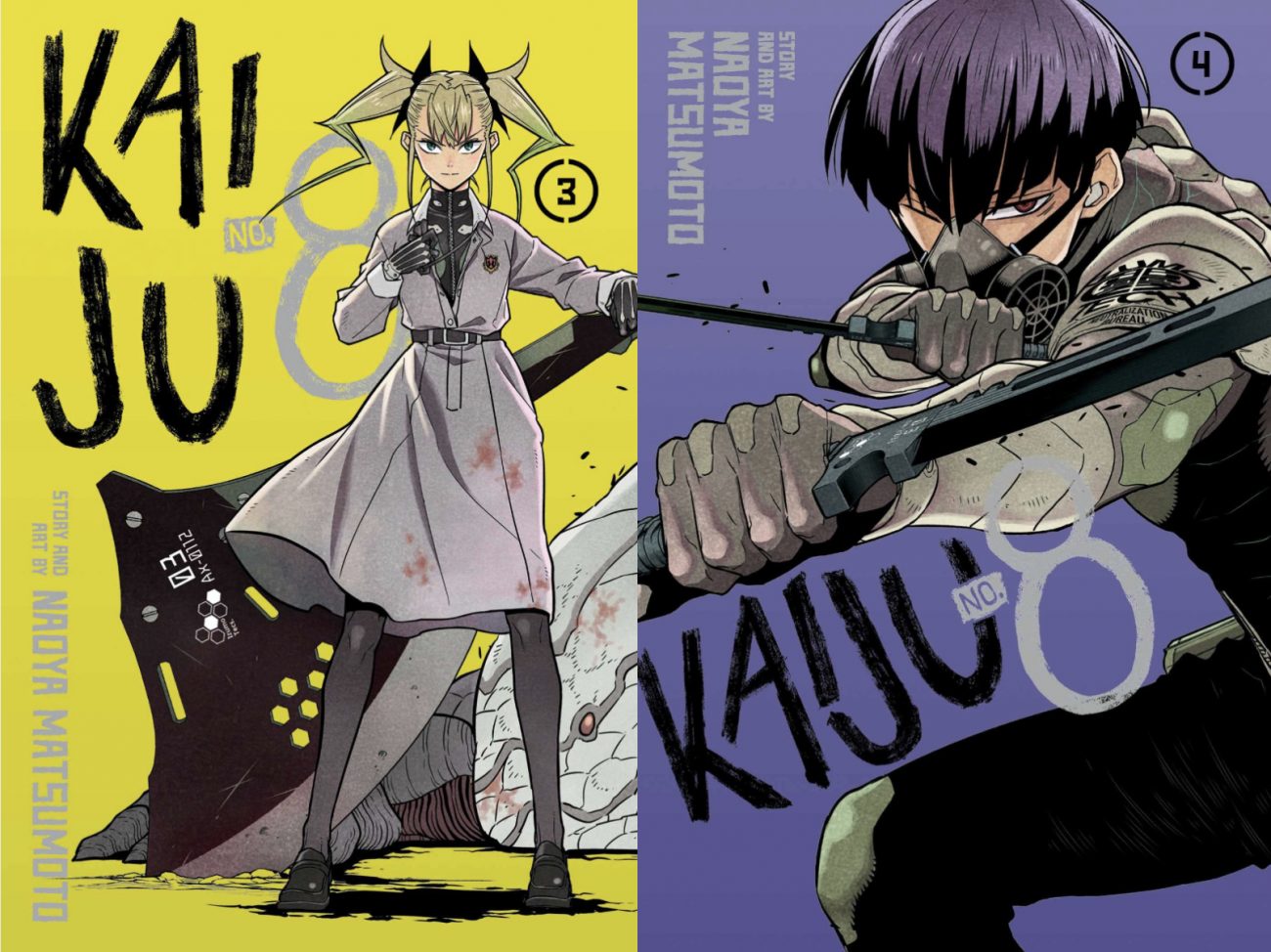 When other giant monster series try to one-up one another, Naoya Matsumoto is reinventing the game with his series Kaiju No. 8. While its first two volumes weren’t exactly perfect, they did manage to bring something new to the formula. The idea of a human gaining monster powers may seem like something from a sentai/tokusatsu series, but it manages to implement enough character to make it feel unique. Said feeling continues in Kaiju No. 8’s third and fourth volumes.

Continuing where the second volume ended, Kafka finds himself battling another humanoid kaiju, saving his comrades Iharu and Reno in the process. However, soon after the new monster runs off, Kafka finds trouble in the form of Vice-Captain Hoshina. They face off in an epic fight, with Kafka doing everything he can to avoid dying or even hurting Hoshina. After finding a means to escape, the Defense Force reflects on their actions…with a big side of wagyu beef! 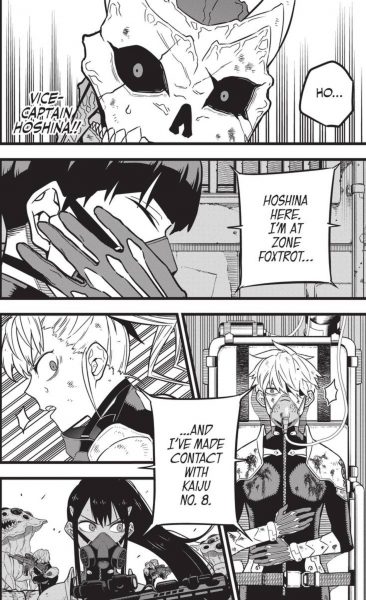 Despite the fight’s serious tone, Kaiju No. 8 does a great job balancing the drama and humor of its world. When the monsters come to slay, there’s no playful attitude to be found in the Defense Force’s soldiers. Sure, they pull off a cool move here and there, but they do them because it’s the right maneuver to use if they want to kill a kaiju. It’s only when the weight’s been lifted off of their shoulders when the soldiers’ true colors come out.

Said colors arrive in the mission’s victory party. What starts as an excuse to drink and be merry suddenly transforms into a gripe fest over how everyone messed up in battle. Fists and food may be flung, but the feelings in the crew are mutual: they want to get strong, and fast! And no one’s gotten stronger faster than Kafka, who earns himself a sweet promotion. 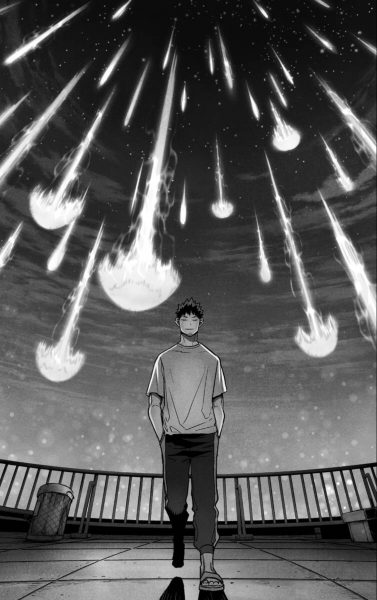 But there’s no time to celebrate, as Wyvern-type kaiju rain on the Defense Force headquarters like meteorites. And leading the pack is the humanoid kaiju from before. A lot is once again on the shoulders of the soldiers, but they have plenty of muscle there to take on the latest threat. On top of that, a certain twin-tailed warrior’s got herself a sweet new weapon!

However, it’s Hoshina’s time to shine in the fourth volume of Kaiju No. 8. He practically goes toe-to-toe on his own against the massive daikaiju. The man who seemed to be just an excuse for an arrogant soldier earns his stripes with his hardcore battle with the behemoth. Hoshina slices, dices, and makes mince meat out of the daikaiju in ways that are truly jaw-dropping. But just when it seems like things are in the clear, a great threat arrives, giving Kafka his moment to shine. 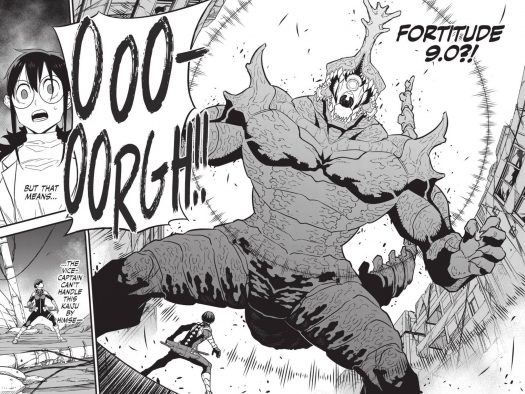 Kafka revealing his kaiju side should spell bad news for him, and — let’s face it — it does. But he gets the backing of his crew, who have seen first-hand how he treats his fellow soldiers. They know he’s no threat; it’s convincing the higher-ups! Alas, even in human form, the bosses only see Kafka as a monster, something that is truly a Gregor Family move!

A fight to survive is what awaits Kafka towards the fourth volume’s finale. Going face-to-face with Isao Shinomiya, our hero tries his damndest to prove his humanity even as he’s being blown to bits. However, like a reflex, his kaiju persona starts peeing through, which does his argument more harm than good. It’s a moment that demonstrates one of humanity’s greatest questions: if a human is trying to kill a creature who’s pleading for mercy, then who’s the real monster here? 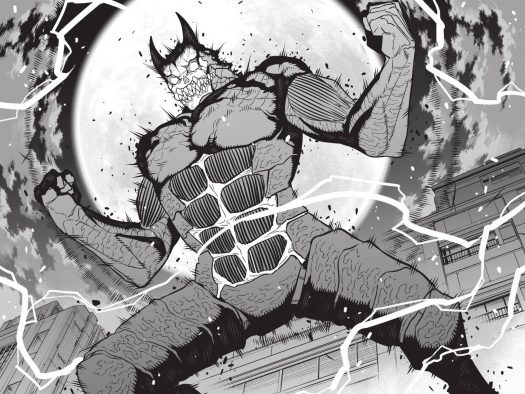 One thing I noticed about these volumes is how some of the art style has changed. While still detailed greatly, there’s a lot more thickness in the outlines of the characters and creatures. It brings to mind the works of Mike Mignola, who has the tendency to mesh cartoonish and grotesquely detailed imagery in his Hellboy and Lobster Johnson works. Matsumoto does a great job with balancing both styles here, in ways that feel more like an homage than straight-up rip-off.

Kaiju No. 8 keeps the excitement going in its third and fourth volumes, as Kafka and the Defense Force take on more creatures than the night can contain. While the manga started with some comparisons to Metamorphosis, at least our hero here has yet to lose trust in those who fight alongside him. It’s now having to convince Shinomiya that he’s no threat, something that’ll prove to be a lot more challenging. Can he prove his loyalty in the end? Honestly, I sure hope so! 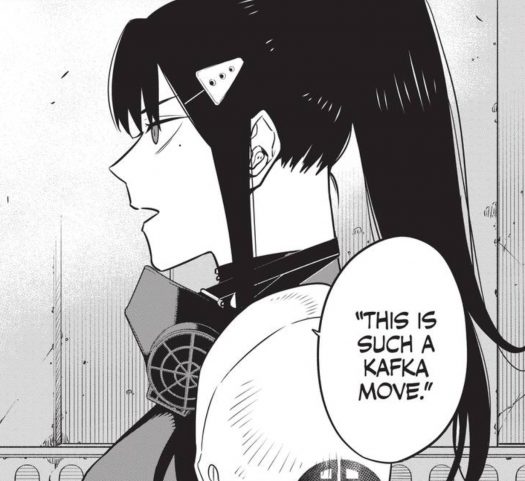