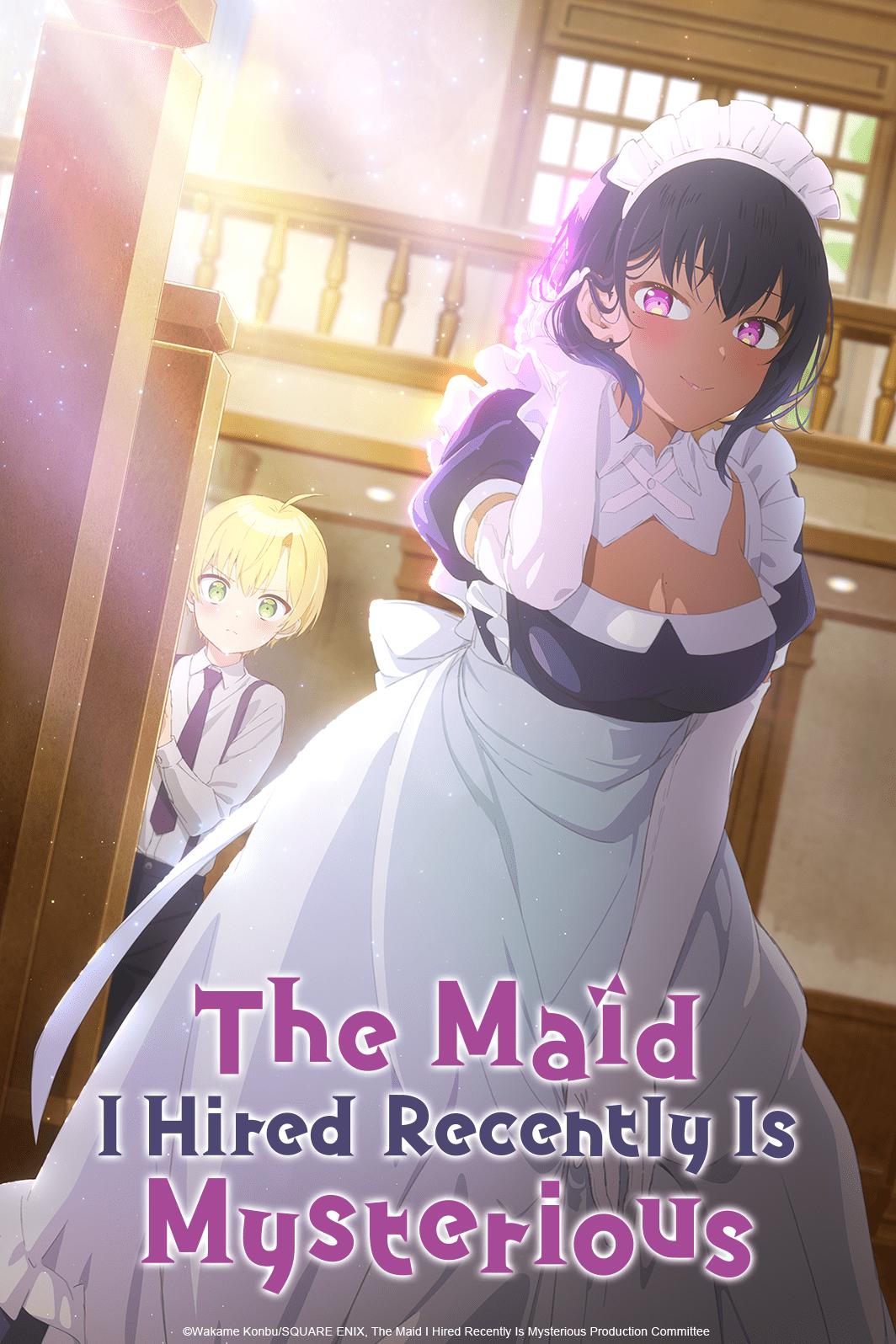 Wakame Konbu knows how to show heart in even the silliest of things. In her work The Great Jahy Will Not Be Defeated!, we saw the adventures of a former Dark Realm ruler lose their power, revert to a small girl, and struggle with her job while living in a crappy apartment. Yet the best parts of the story surrounded Jahy bonding with friends old and new, with the goofy antics being wrapped in a sweet bow. The same can be said about Konbu’s other work The Maid I Hired Recently Is Mysterious, which was also given the anime treatment this summer.

The story of The Maid I Hired Recently Is Mysterious follows Yuuri (Saori Hayami), a young rich kid whose parents die in a car accident. After letting his entire staff go, Yuuri does his best to take care of himself in his mansion. But just when he’s realizes that this is easier said than done, a beautiful maid named Lilith (Rie Takahashi) enters his life. She says she’ll take care of Yuuri, and have no worry about paying her a salary. 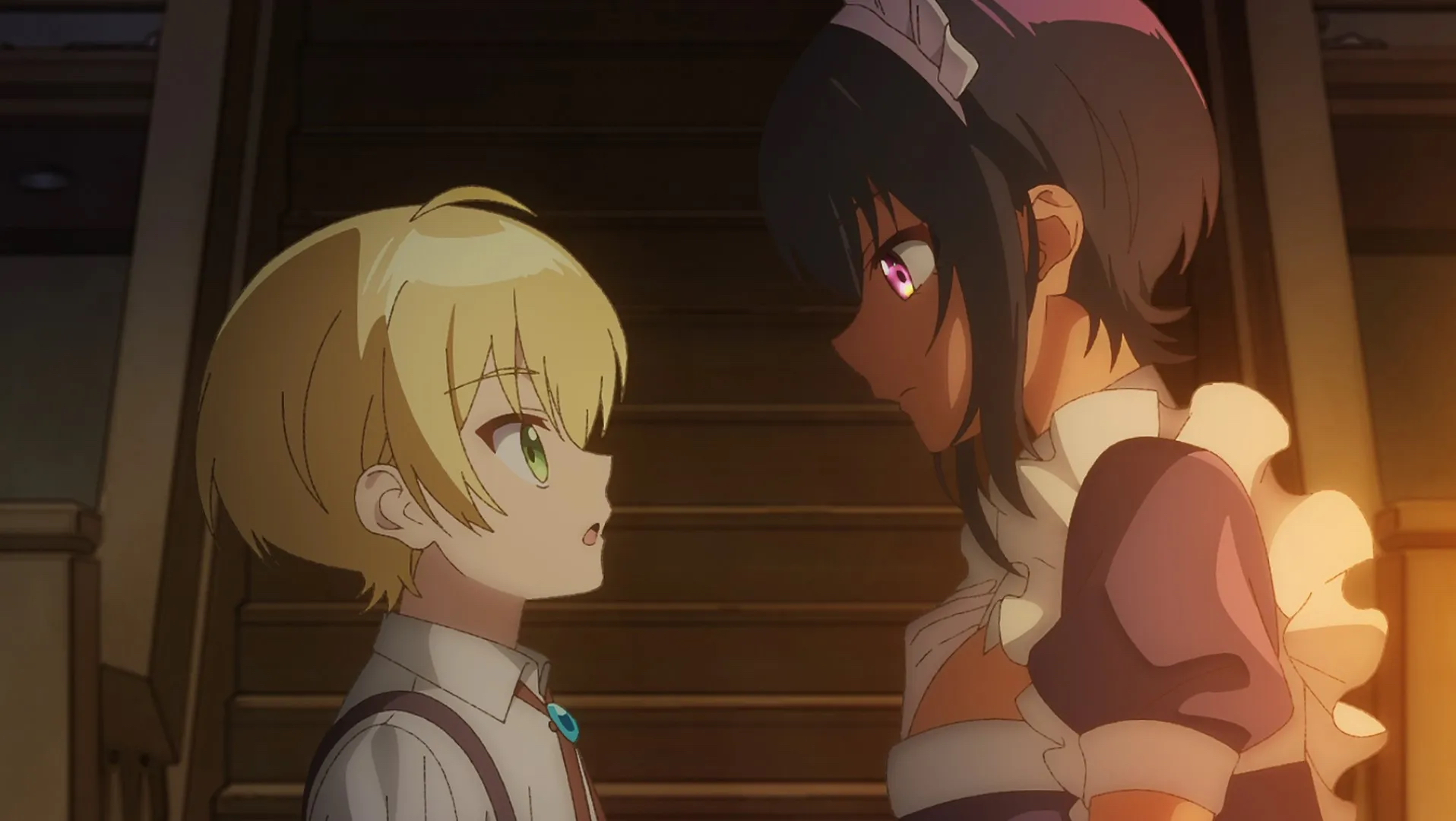 Thus, Yuuri becomes suspicious of Lilith’s presence. Despite her being a terrific maid, the boy believes that she has some hidden agenda behind her work. Whenever he questions her cooking or treatment, Lilith responds in a sultry, teasing manner. However, Yuuri unintentionally one-ups her every time, saying something that makes the maid blush and stammer.

Such a relationship makes Yuuri’s friend Tsukasa (Yui Horie) red with joy. Her overworked imagination has her thinking that Yuuri and Lilith may be having a forbidden love tryst, a sign that the young girl needs to cool it on the light novel-reading. The female butler Fujisaki (Mikako Komatsu), who’s also a longtime colleague of Lilith’s, does her best to keep Tsukasa’s fantasies from running wild, while at the same time do her best to avoid having a dress put on her. All of this doesn’t help Yuuri, who still has trouble trying to figure out what Lilith’s deal is. 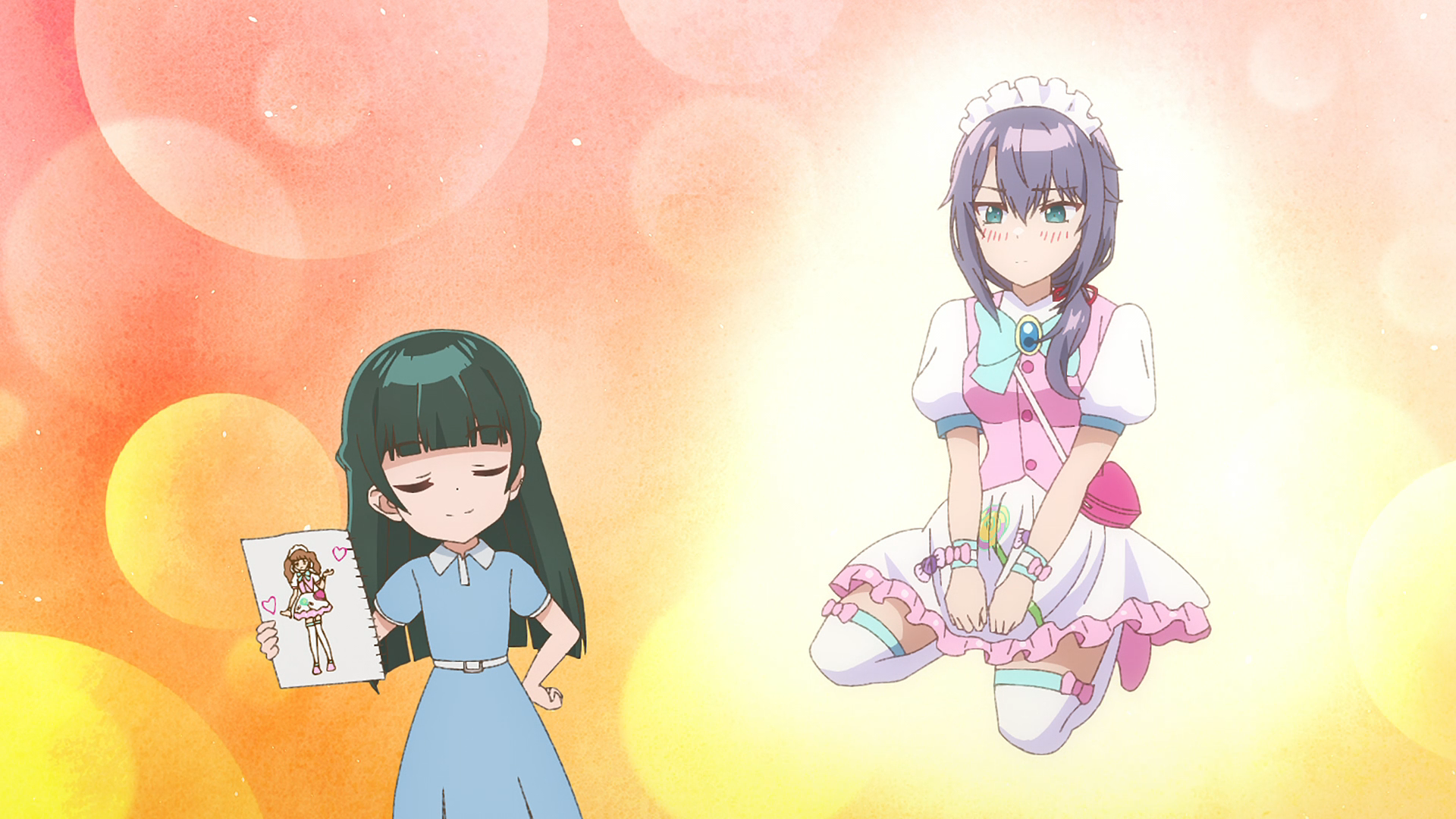 A lot of The Maid I Hired Recently Is Mysterious plays on the art of misunderstanding. While it’s a played-out gimmick in all sorts of comedies, there’s a sweeter tone to it that makes it enjoyable to watch. Yuuri’s mannerisms are understandable when around Lilith. He’s still a young kid, still trying to figure out the ways of life and love.

While he’s obviously too young to be thinking romantically, the things Yuuri says to Lilith regarding his heart and incapacity to not stop thinking of her are signs that he’s awakening to new feelings. Lilith, who acts like a protective big sister, may not say anything to sway Yuuri of these feelings, but perhaps we can blame that on her being taken aback by the things he says. This of course leads to more misunderstandings, which seem to be fueled by Tsukasa’s lovesick imagination. Yet despite these weird vibes, this anime does its best to not be a complete creep about it. 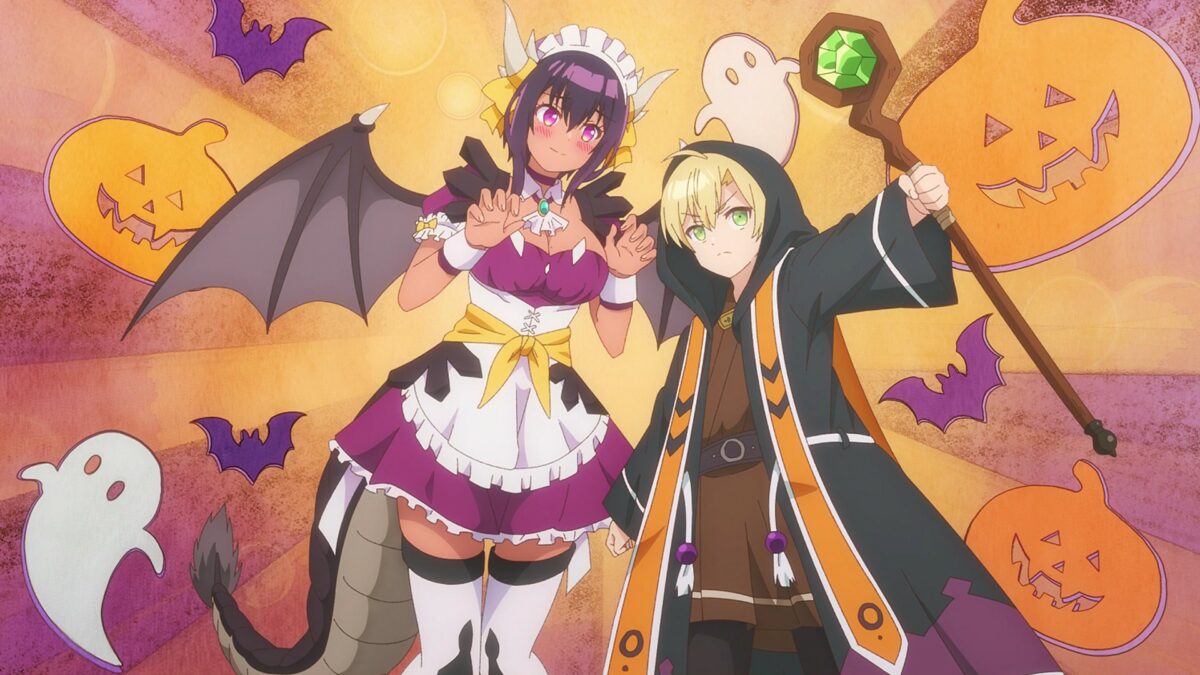 The key factor of this is the absence of Yuuri’s parents. With no one left in his family to care for him, it’s up to Lilith to be his support. Whether it’s cooking, cleaning, or attending a sports festival, she becomes as big a part of Yuuri’s life as any relative or close friend. Why she’s helping Yuuri is still unknown, but one can imagine that the parents had a special connection with the purple-eyed maid.

Bringing in Natsume (Miyu Tomita) as a rival of Yuuri’s feels strange at first, only to see her mannerisms being similar to his. The redheaded maid attempts to bring Lilith back to her mansion, only for her to wind up sticking around when her plan is futile. The funnier aspect with Natsume is how she and Yuuri compete over what makes Lilith so great, like they’re two peas on the opposite side of a pod. Naturally, such fights leave Lilith feeling flustered, albeit not so much as she tries to make them stop. 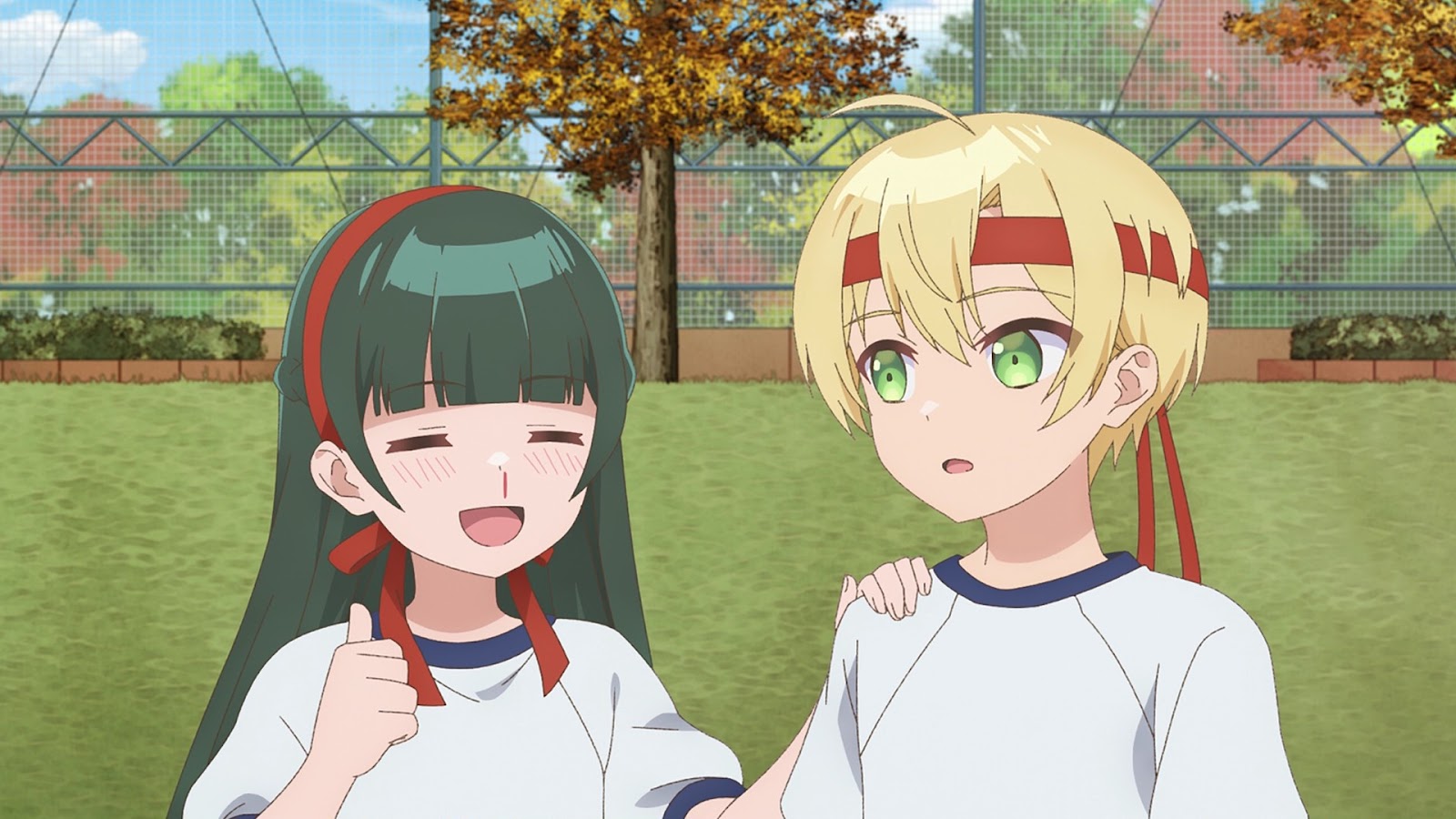 Some may question the tone of The Maid I Hired Recently Is Mysterious, and I can’t really blame them for that. Anything involving even a slight hint of love between two folks with a massive age gape is sure to trigger police sirens in one’s head. (Reading Hitomi Takano’s My Boy certainly caused me to feel this way!) But as the story goes on, one can see that nothing weird or gross seems likely to happen. Quite the contrary, the love that’s on displayed between Yuuri and Lilith is more on the family side than the romance one.

Yuuri continues to grow as a person thanks in part to Lilith’s help. His trust levels grow, his comfort levels rise, and his confidence becomes all the more better. Tsukasa has something of a hand in it too, but her contributions are more helping Yuuri find out why his brain’s feeling the way it does. Yes, she can be wrong on most occasions, but her chats with Yuuri do aid in helping the boy find the true reasons behind why his mind and heart feel the way they do. 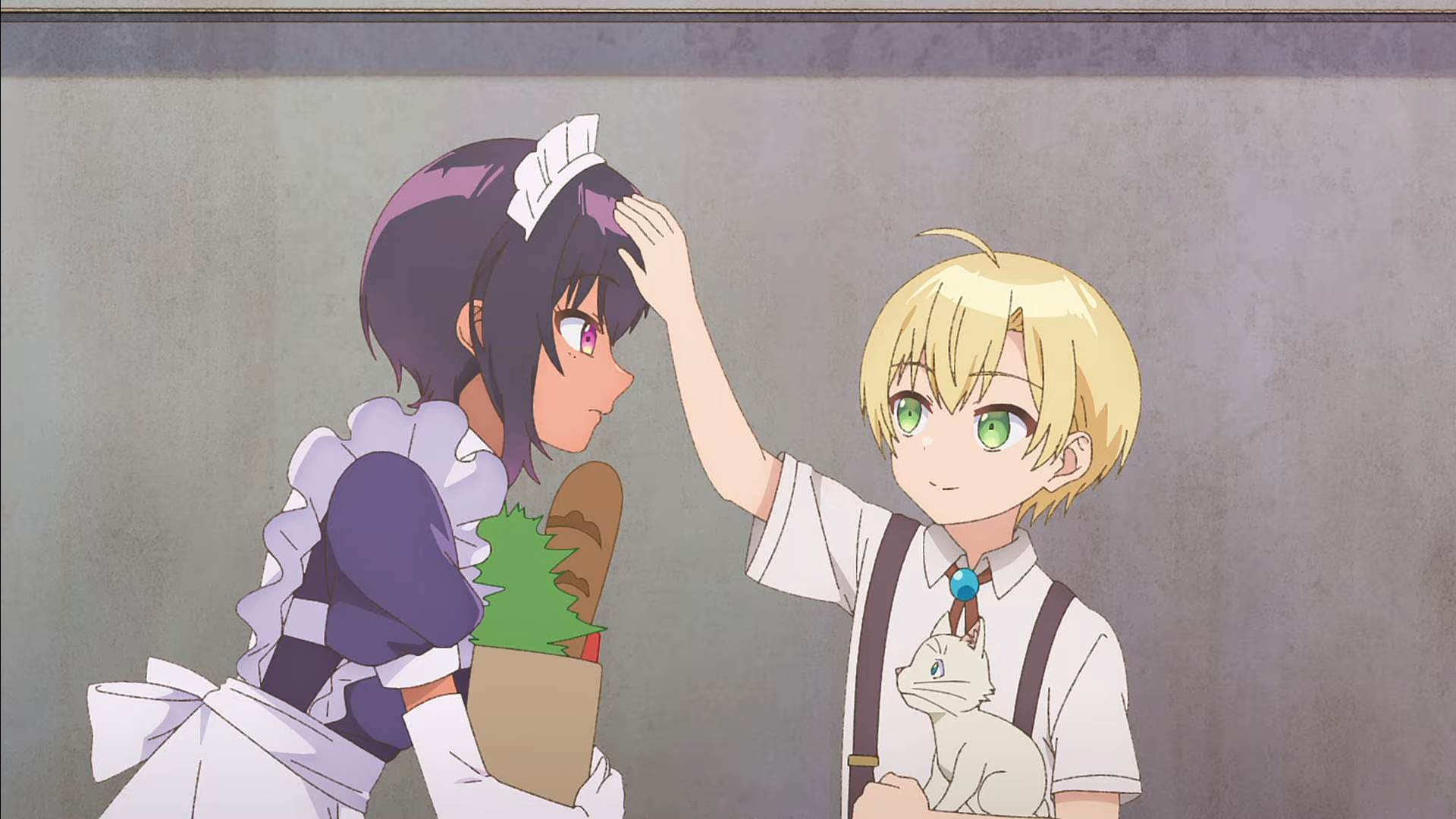 It’s that all-around sweetness that keeps The Maid I Hired Recently Is Mysterious more heartfelt than eyebrow-raising. Said sweetness is thanks in part to the voice cast, with Takahashi’s Lilith bringing a kind tone in everything she says. Hayami is unrecognizable as Yuuri, who delivers a boyish charm in her performance. Seiyuu veteran Yui Horie is adorable as Tsukasa, who coos her way through the dialogue in a blissful manner.

Silver Link, who also did The Great Jahy, teams up with Blade to bring this anime to life with mixed results. The character designs and movements are both beautiful and fluid, with a lot of care placed in Lilith’s looks and outfits. With that being said, the scenery at times can feel a little flat, with the mansion, school, and town looking slightly average. However, the animators know their way around bringing the gorgeousness out of a flower garden with great ease.

The Maid I Hired Recently Is Mysterious isn’t as strong comedically as The Great Jahy, but it makes up for it with its endearing heart and spirit. Yuuri and Lilith do bring some good laughs from their misunderstandings, but the good stuff falls on when the two are helping one another out. It’s good-natured enough to be a safe watch, while at the same time teeters on a line that it knows not to cross. Simply put, The Maid I Hired Recently Is Mysterious does well staying in a proper lane, even if it might act suspiciously like it wants to swerve elsewhere.