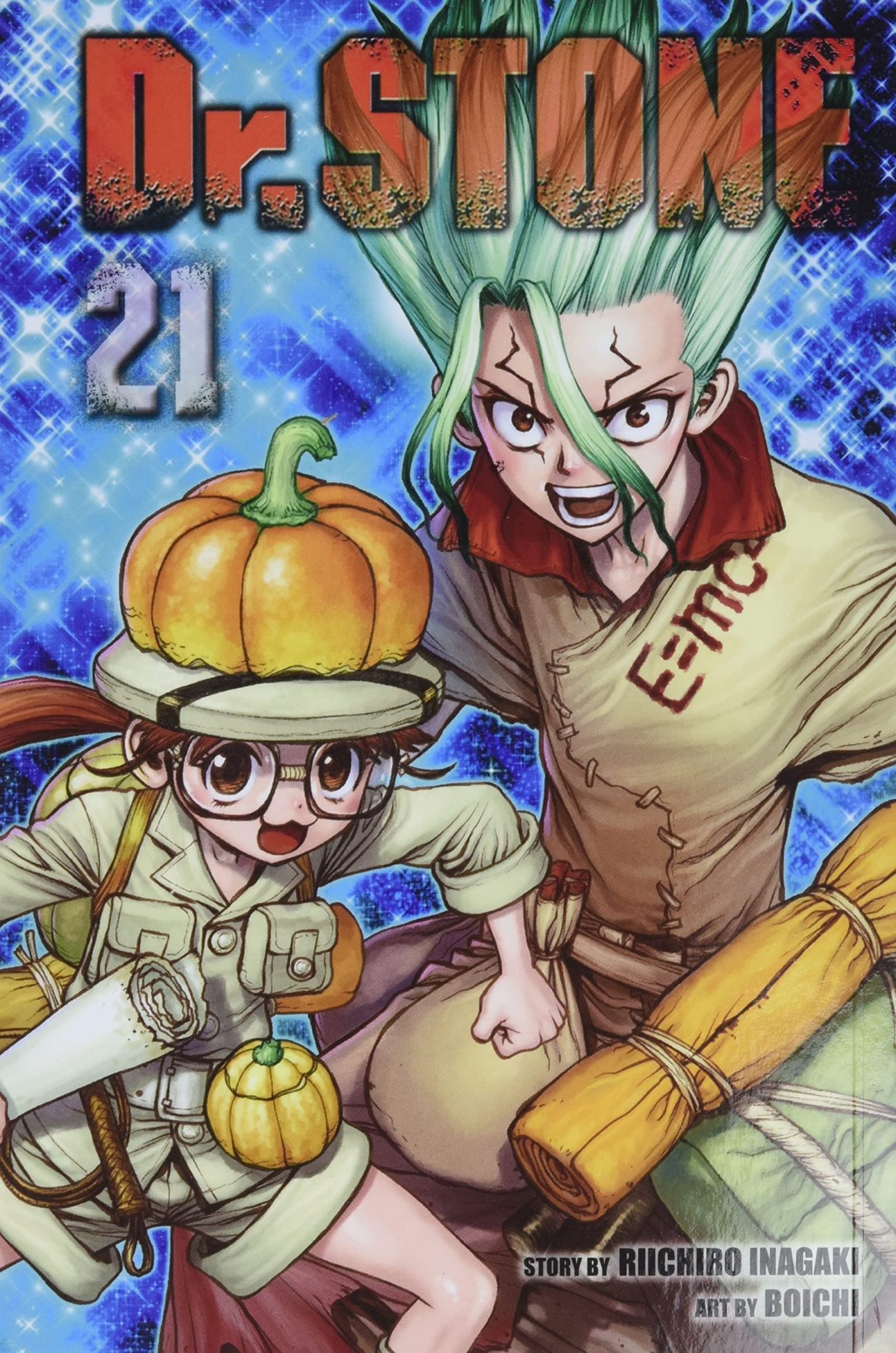 Diamonds may be forever, but that doesn’t mean they won’t crack. Senku and the rest of the Kingdom of Science find this out in the twenty-first volume of Dr. STONE, as they unravel a new mystery. Now in South America, Dr. Xeno is hot on our heroes’ trail. With no time to spare, the Kingdom of Science seeks a plan to win their latest battle. But to do that, they need plenty of girl’s best friend.

So why diamonds? Well the Kingdom of Science discovers the origin of the great stone phenomenon that happened thousands of years ago. The sight of thousands of petrification devices piled like a great mountain takes Senku and everyone by horrified surprise. Thankfully, that means the crew can get cracking and figure out how this scary technology actually works. And with a smash and a snap, the most precious of gems was found, albeit damaged and unusable. 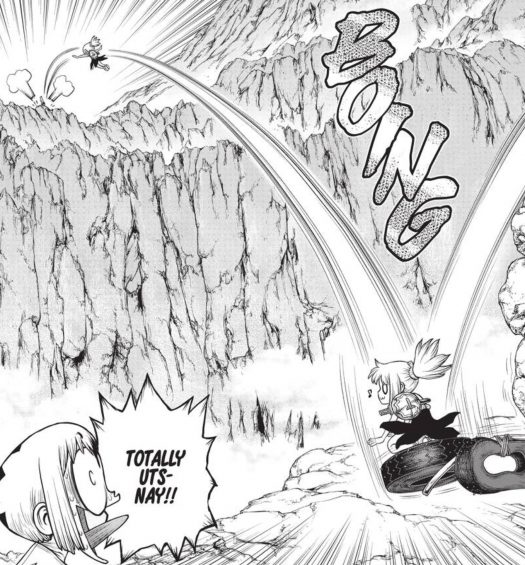 That’s when Senku’s gears spin faster, conjuring up a plan that requires the creation of diamonds to make new Medusa devices. It gives the lesser-intelligent members of the Kingdom of Science a chance to build their brain power, even if the first few trials literally blow up in their faces. Meanwhile, the creation of a vehicle that sonar or radar can detect is completed after someone nonchalantly makes a suggestion regarding the broken Medusa devices. With all of these elements in play, the plan to take out Dr. Xeno starts taking shape.

This volume of Dr. STONE showcases just how far Senku and the Kingdom of Science have gone since its beginning. From a science perspective, we’ve seen tiny miracles like soap and fire help to bring to life vehicles and other massive machinery. But there’s also the aspect of how far every key player has come since their first introduction. Enemies become allies, all for the sake of saving all of humanity. Sure, there’s still some greed here and there, but nevertheless there’s a need to do what’s for the the greater good that’s the biggest focus for every member of Senku’s team. 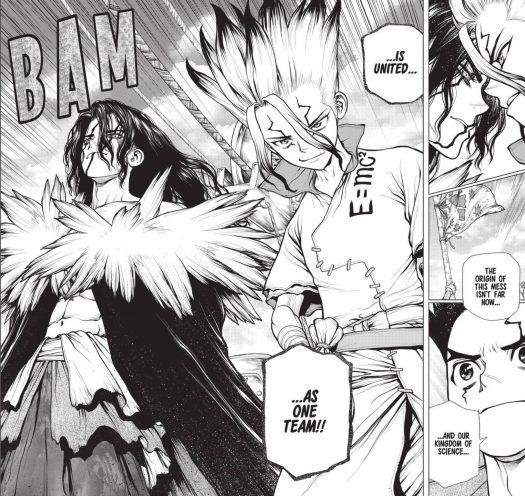 However, the real fun of Dr. STONE is always in how these modern inventions can come to be in a primitive world. Railway systems and stealth ships are brought forth in ways that are both brilliant and a joy to read unfold. Even the mythical Medusa devices are treated with as much thought process as objects from reality. Granted, these sorts of things can’t be created today without a big bank account or a good lab, but it shows that these inventions can be crafted by any capable hand.

Tension does appear towards the end of the volume, as Dr. Xeno’s heavily-armed soldiers make their way to the Kingdom of Science’s location. With a single working Medusa device in their possession, Senku comes up with an ingenious idea, one that requires the speed and tenacity of little Suika. But when her good conscience gets in the way, the plan slowly falls apart. And when Kohaku and the stronger folks of Senku’s team set off to save her, well, that’s a story for another time.

Dr. STONE keeps raising the stakes, even twenty-one volumes in. The smarts, imagination, and characters of Riichiro Inagaki & BOICHI’s work continue to make this one of the best shonen manga around. How the battle ends may not be foretold, but readers can guess it’ll be one exciting fight to watch happen. Until then, I reckon Dr. STONE would be glad to see some of its readers embrace the minerals this Earth has given us, even if it requires some digging and heavy thinking. 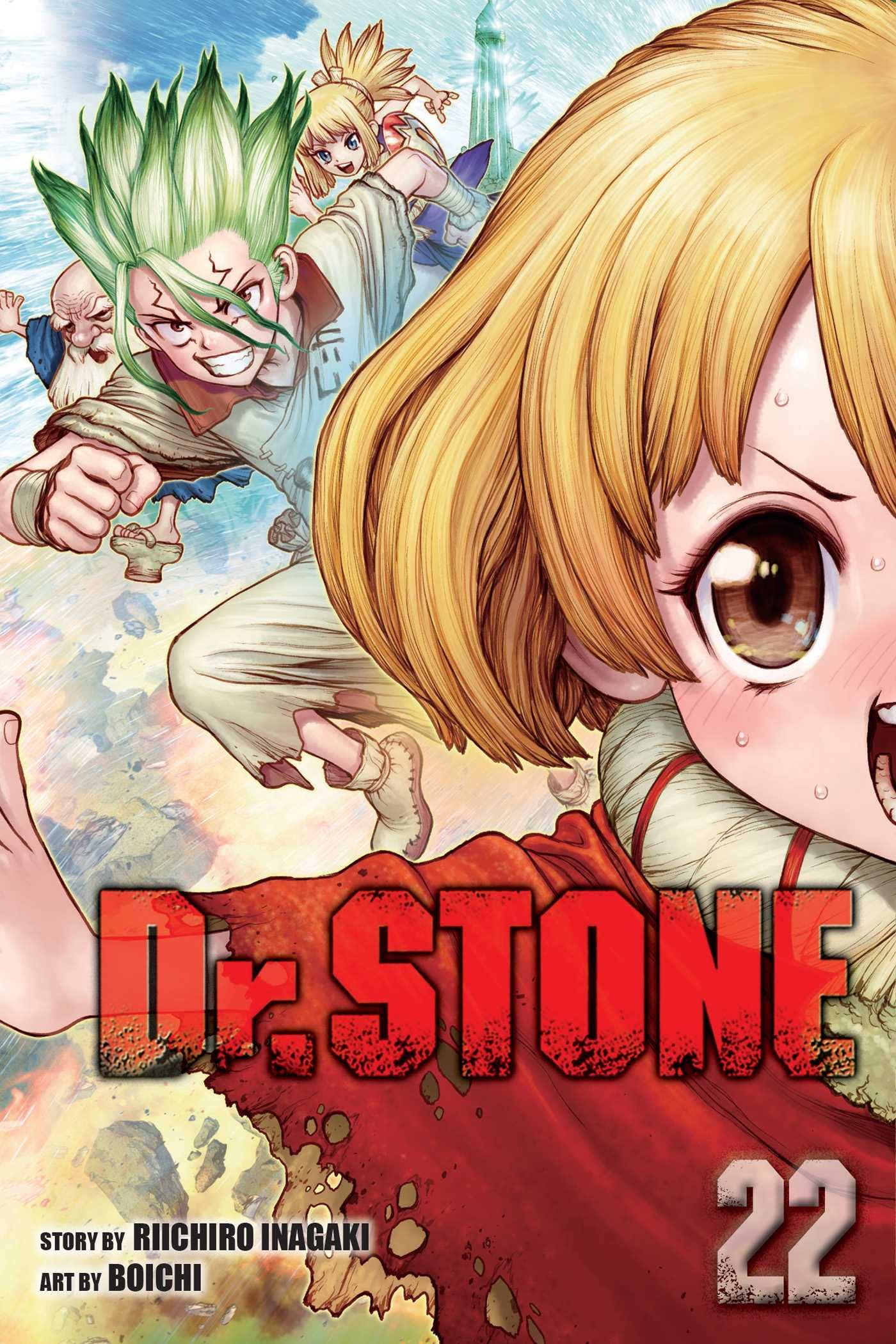 Dr. STONE has always been about putting brains over brawn. However, with it being now two Kingdoms of Science battling it out, it comes time for the physical muscles to be useful to the narrative. In Volume Twenty-Two, it’s a massive battle to gain access to the Medusa device, with both sides aiming to lay claim to it. But it all comes with a price, specficically the lives of some well-liked characters.

Both kingdoms collide as a race against time to create a Medusa device clocks down. Kohaku, Taiju, and Tsukasa have bullets rain all over their bodies, as every strong person on Senku’s side falls to Stanely’s army. Hope isn’t lost, as the Japan side of science inches closer to creating a proper Medusa device. And at the very last moment, a plan is enacted that literally transforms the foundation of Earth itself!

I’ll admit that the chaos showcased in this volume of Dr. STONE was a little overwhelming for the senses. For a manga that would rather showcase the power of science, seeing a war unfold like in here was slightly unnerving. While there’s been blood and death before, it hasn’t never reached this level before, and it’s sort of disturbing. Then again, Riichiro Inagaki and BOICHI are merely showing the dangers of power grabs, so perhaps it can serve as a metaphor for modern-day war conflicts.

Everything changes when the Medusa device is initiated, with the entire world being cast into stone once more. But before that, a jar of revival fluid is placed high above for someone to be awakened by it. A few years goes by, before it finds its user: Suika! The fate of the Kingdom of Science is placed on the young girl’s shoulders, as she finds everyone’s stoned bodies and seeks to find more fluid to bring them back to life. 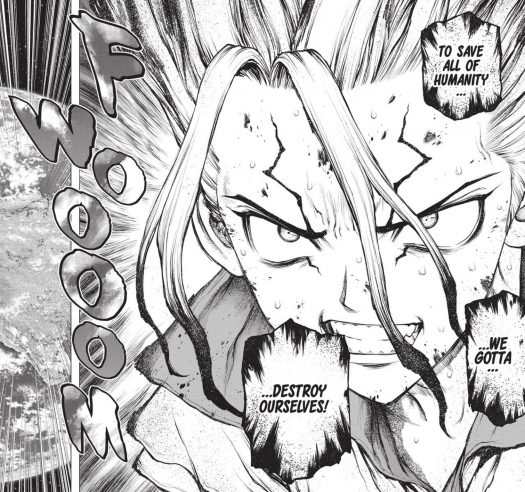 Although it leans more heavily into being comedic, one can’t help but praise Suika for giving everything the old college try. She’s forced to learn how to make her special helmet work, gather all of her stoned friends, and attempt to figure out Senku’s recipe for the revival fluid. All of it is presented with big laughs, while at the same time showcases the beauty of the world that BOICHI has put to paper. And then, in the volume’s final moments, a beautiful moment arrives!

Despite its violent first half, the twenty-second volume of Dr. STONE brings a beacon of hope to the Kingdom of Science. It also starts to finish the road that Inagaki and BOICHI started many years back, as the story begins winding down. Will Senku bring humanity fully back like he promised, or has this bout with a rival Kingdom of Science made him change his mind? There’s only one way to find out, as it’s best to get excited to see what might be in store next!