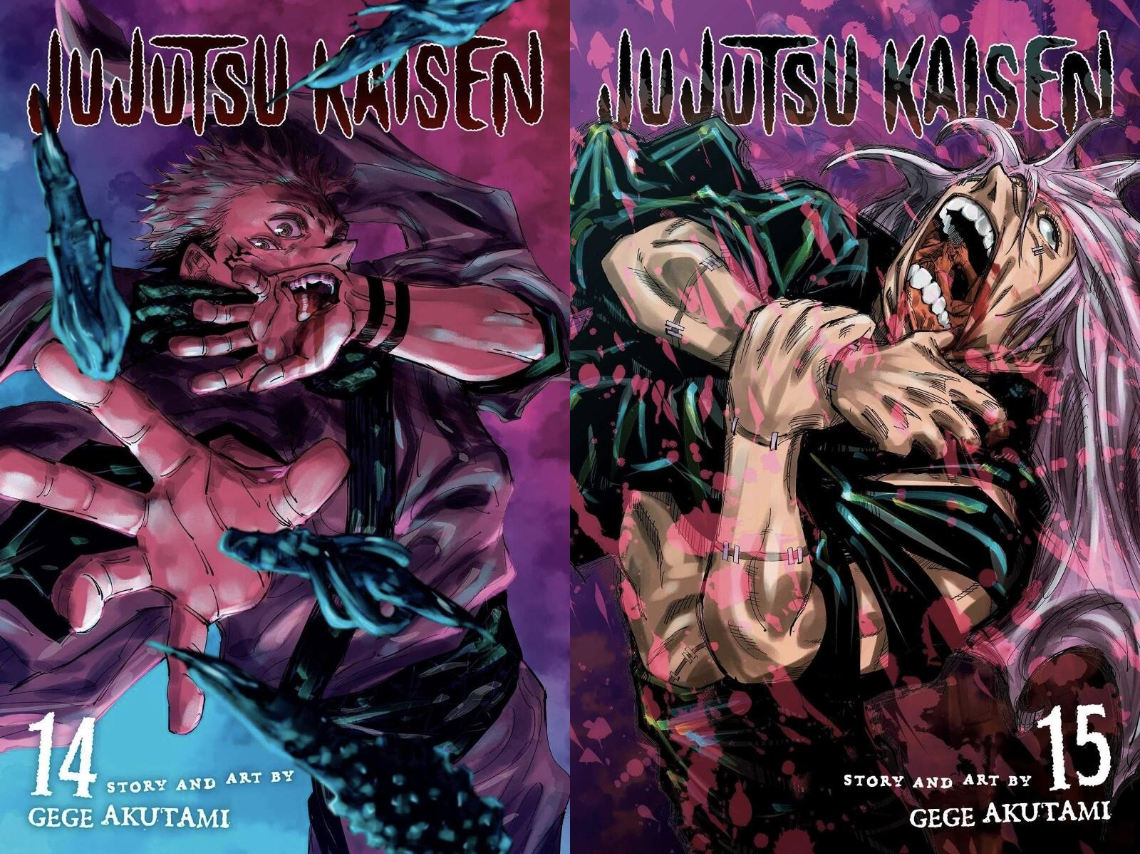 Nothing worries me more than when a fight is dragged out longer than it should. This feeling has taken residence in my mind whenever I read any current volume of Jujutsu Kaisen. “The Shibuya Incident” arc has had some visually-stunning moments and fights, but it’s been doing nothing to progress the story. It had gotten to the point where the words that’d fly out of my mouth after reading the last couple of volumes were as followed: “GET ON WITH IT!!!!”

Sure enough, Gege Akutami heard my gripes, as the fourteenth volume lights a much-needed fire under Jujutsu Kaisen’s ass!

Volume Fourteen begins with the battle between Sukuna and Jogo, resulting in a boatload of chaos wherever they exchange punches. As this goes on, Mahito is carving out his next plan to take out the rest of the Jujutsu sorcerers. While Megumi makes a daring move, Nobara goes face-to-face with Mahito, who also takes on Itadori in another part of the subway station. What happens next is something that Mahito never counted on! 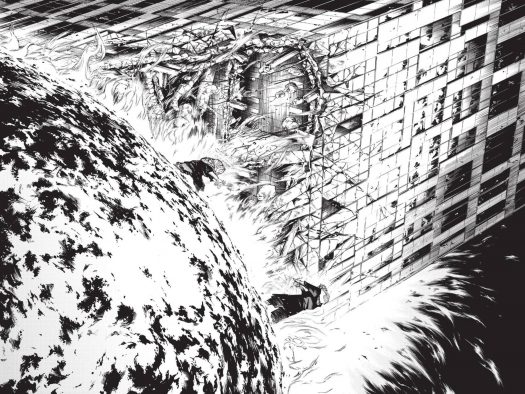 A lot of this particular volume is focused on the action taking place in “The Shibuya Incident”. The sorcerers and curses seem to be tired of talking and instead use their skills to communicate. This results in some impressive visuals from Akutami, as buildings are leveled, curses are sliced in half, and humans explode like flesh-filled balloons. Jujutsu Kaisen reaches truly hardcore levels of carnage, in ways that call back to old-school shonen manga like Fist of the North Star and Devilman.

This leads me to look at Mahito as one of the better shonen antagonists in recent memory. We all know he could be wicked with his way of treating humans, but what happens here goes beyond the normal amount of evil. Thousands of innocent people are slaughtered all for Mahito’s plan, making any Regular Joe that roams closely to his vicinity a target for his nefarious ways. Akutami lets Mahito play by Japanese horror rules, where no matter how innocent one may be, they can still die in the most brutal of fashions.

Which then brings me to Itadori, who wakens back up after Sukuna deals with Jogo and the curse Megumi summons. Here’s a protagonist that finally understands the weight that his curse brings to him. The level of violence that Sukuna is capable of makes him realize why the Jujutsu sorcerers of the world want him executed. Perhaps he’ll redeem himself when dealing with Mahito, yet at the same time, he knows that he can’t fully give back what Sukuna has already taken from the world.

Fortunately, Itadori has a hell of a partner in Nobara. Her chapters in Volume Fourteen of Jujutsu Kaisen shine brighter than almost anything else. How she handles Mahito takes even the big villain by surprise, as she literally nails him with everything she’s got. It results in quite the showstopper of a fight, as she makes Mahito question whether or not he’s strong enough to stop her. 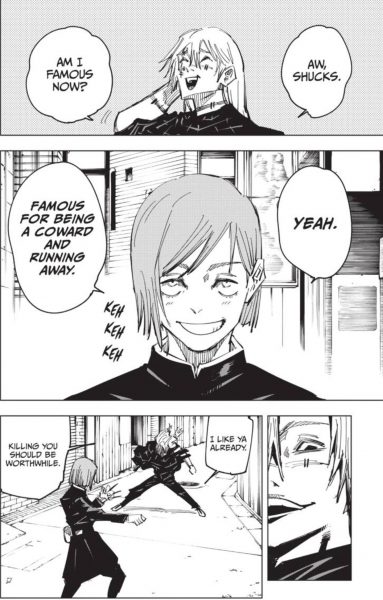 However, Nobara’s taken out of action in the fifteenth volume, in a way that makes you question whether she’s alive or dead. It breaks Itadori, to the point of not wanting to fight anymore. Mahito takes that opportunity to give Sukuna’s vessel a good pounding. Thankfully, a man who treats Itadori as his best friend for life appears in the nick of time, giving way to a two-on-one fight that’s truly for the ages!

Itadori, Mahito, and Todo throw everything into their battle. From the most grotesque to the most goofiest of attacks, all three aim to finish this incident in Shibuya with all of their might in their back pockets. One can’t help but think just how ridiculous some of these fights can be, as evident by Akutami’s need to explain how everything works in segments in-between chapters. (Honestly, he can just say, “It’s fiction! Deal with it!”, and that would be reason enough.) But every moment of this fight keeps one-upping itself, until at long last all three fighters run out of steam. 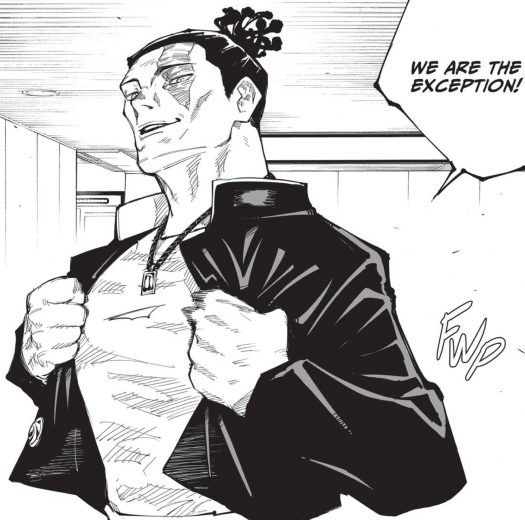 And for the first time, we see true fear in Mahito’s eyes. Running away from Itadori, he realizes that his number’s up if our hero lays a single finger on him. That’s when Geto appears, and shows why he’s the real true baddie of Jujutsu Kaisen. While it doesn’t exactly conclude “The Shibuya Incident”, it does act as the beginning of its epilogue.

Jujutsu Kaisen has “The Shibuya Incident” pay off in spades, despite it going a little too long in places. But it was all leading up to one hell of a fight between the Jujutsu sorcerers and Mahito’s curses. Much evil fell, but so did some of this series’s biggest allies. With the whereabouts of Gojo still in the air (or whether or not he can actually return!), Jujutsu Kaisen nears the end of “The Shibuya Incident” with a lot of blood, plenty of questions, and a shudder of fear for what’s to come now that Itadori is face-to-face with a true man of evil! 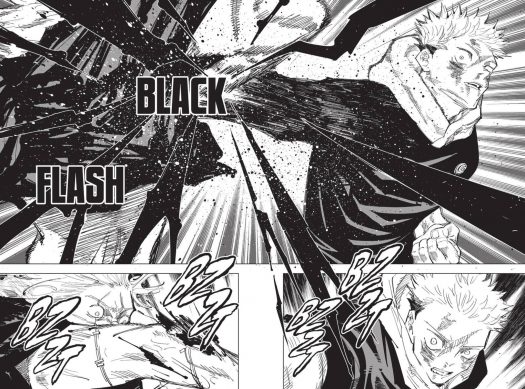 GAME REVIEW | Thrice the Mayhem &a...