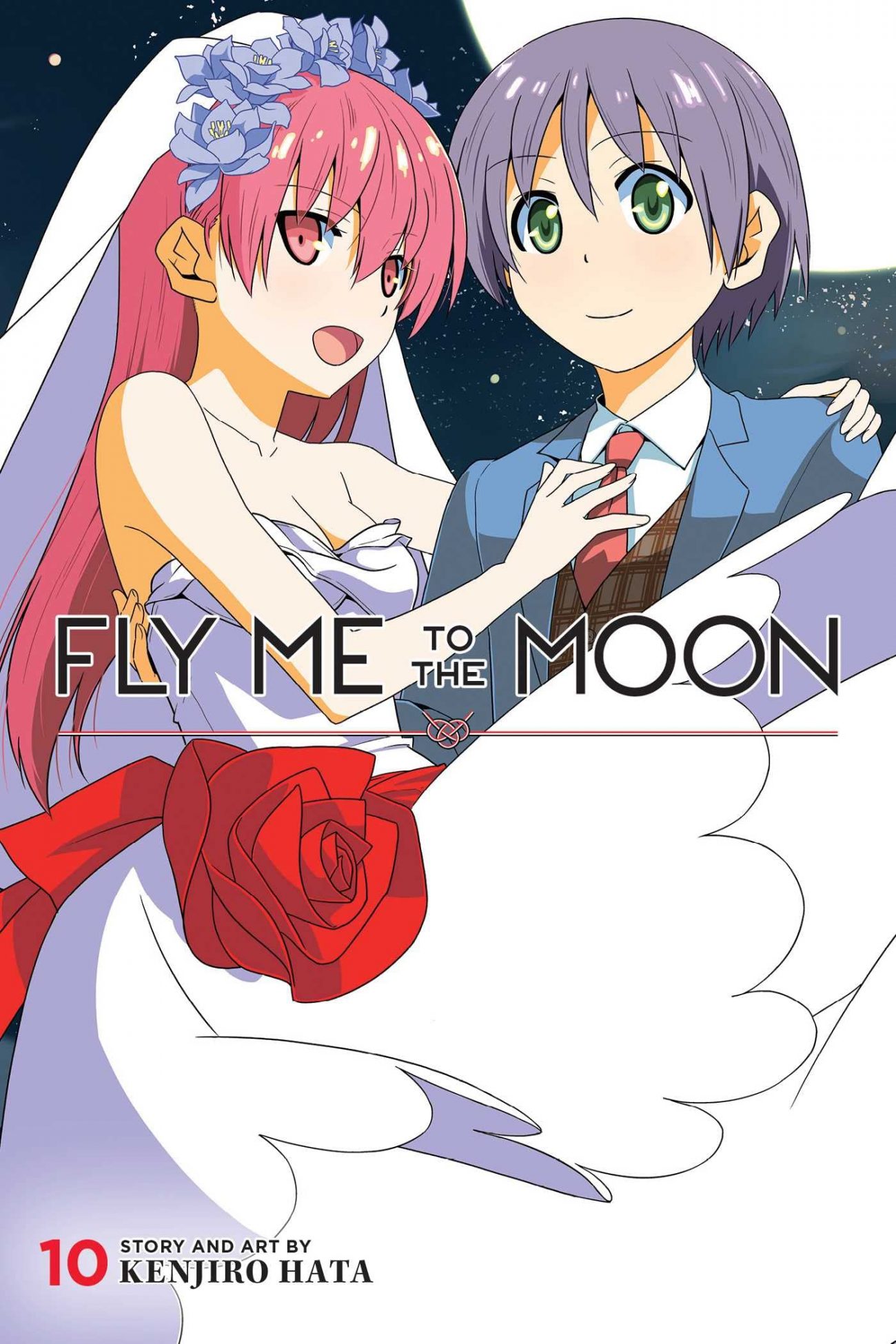 Ah, the great outdoors. There’s nothing like fresh mountain air, clean roaring rivers, and star-studded skies to take in the full appreciation of Mother Nature. No, this isn’t another glowing review of Laid-Back Camp (which everyone and their grandmother should read & watch!), but rather a setup for the tenth volume of Fly Me to the Moon. For you see, thanks to a nosy grandmother, our lovebirds have been brought to a roughing-it kind of surrounding.

But first, poor Nasa must deal with the consequence of marrying a terrific cook, with him putting on some love handles. Yanagi-sensei aims to confess her love to Taniguchi, but has to first admit to committing a deed he told her strictly not to do. Meanwhile, Nasa attempts to sneak a peek at Tsukasa’s undies, as his self-conscious ways gets away of his horniness. Plus, Arisugawa seeks a bold man to be her nude model for an upcoming art project. 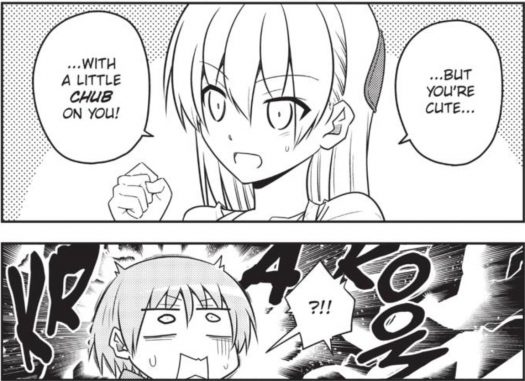 The thing that has made Fly Me to the Moon such a joy to read is how relatable it can be. Sure, it takes some cartoonish elements into consideration, but how Nasa and Tsukasa deal with common couples challenges is presented with such “I’ve been there, man” energy. Whether it’s something innocent like buying a piece of furniture or naughty like, well, sneaking a peek at your love’s undergarments, every bit of Nasa and Tsukasa’s life is showcased with both cuteness and a fine level of understanding one’s feelings.

Which leads me to the camping part of this volume. It’s obvious that something’s bothering Tsukasa when her grandmother brings up the idea to camp. However, because her husband’s excited for it, she has no choice but to go along with the trip. Of course, it helps (or hinders) her that a boatload of friends are tagging along, so the roughing it part of camping isn’t as torturous as it could’ve been. But Nasa has some other ideas to add some excitement to the camping trip, and we’re not talking about rock climbing either! 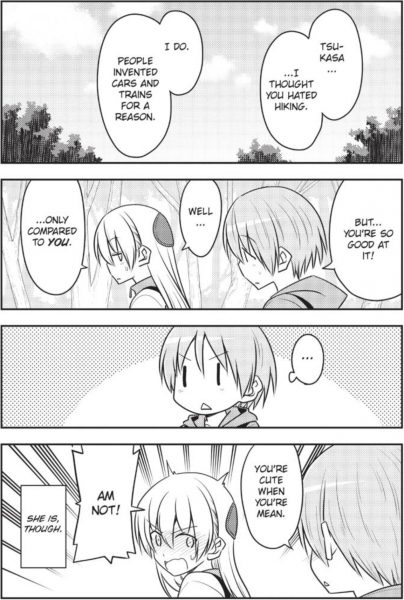 But all of this leads towards a hint about Tsukasa’s mysterious past. It almost comes to a head when she goes back to grab a hiker whose lagging behind. The way Tsukasa handles the hike gives way to not just informative facts about wildlife, but a certain ninja-styled means of taking on rough pathways. Because of just how swiftly and flawlessly she’s able to handle tough terrains, it leads us to wonder who Tsukasa really is.

For that matter, how come Tsukasa knows fine details about what happened hundreds of years ago? Does she truly have connection to the moon in the same way Princess Kaguya did in tales of old? Even Nasa’s getting curious about why Tsukasa married him immediately, even though her current reason is sweet enough. (Hell, the Q&A section at the end of the volume is also getting antsy about her true self!) 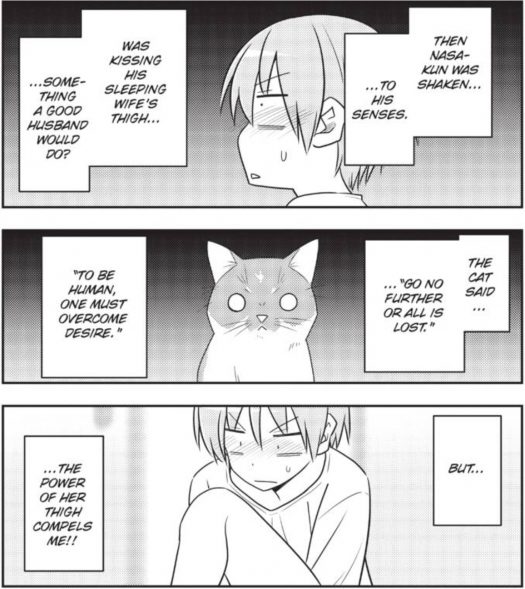 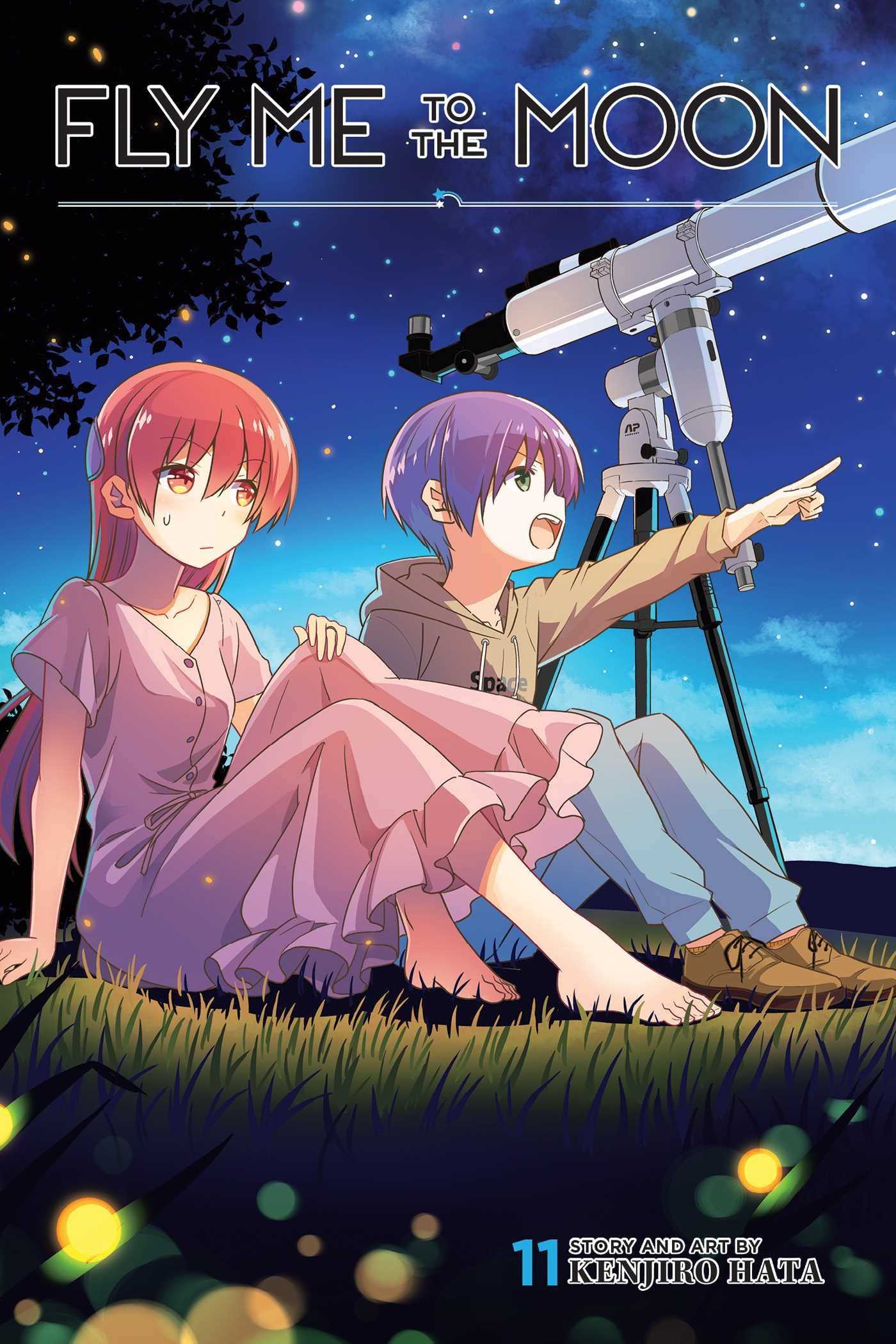 There’s something about Nasa and Tsukasa that makes them the ideal couple in manga rom-coms today. Perhaps it’s the mixture of sweetness, silliness, and — yes — horniness that these two are filled with. It gets to a point where their level of love is infectious, as it brings their friends together in a way that makes them feel more like family than anything else. Volume Eleven of Fly Me to the Moon continues this togetherness, with the wilderness the couple’s setting and a celebration of love its cause.

Because they just up and got hitched, Nasa and Tsukasa never had a true wedding ceremony. Although they still need to have one, their friends come together to do the next-best-thing: a wedding reception. There the two cut the cake, reminisce on their beginnings, and give the friends an excuse to light fireworks. Nasa’s chat with Tsukasa’s grandmother brings forth the conversation of why we wed in the first place. While there’s no true correct answer, both he and Tsukasa have plenty of reasons why they want to be together forever. 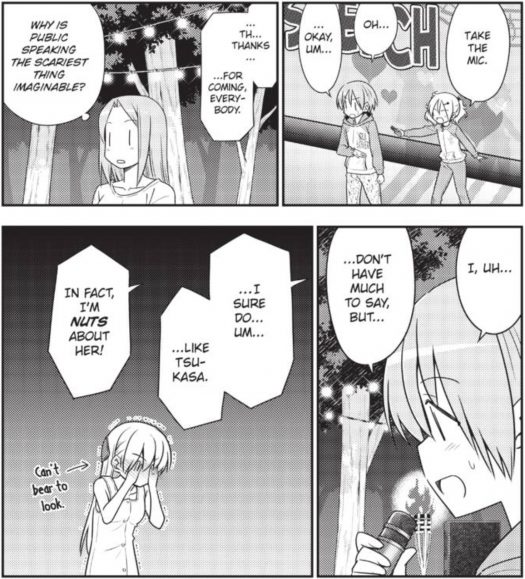 It’s a moment that elevates the sweetness levels of Fly Me to the Moon towards a new level. Sure, the two have their flaws that need ironing out, but the important things in a relationship are fully intact. That love is showcased with the ways they compliment one another, help one another, and hold…each…other…? Okay, so apparently Nasa’s a horrible hugger, which leads Tsukasa to give the poor lover boy a TED Talk on how to wrap his arms around her properly. It’s a helpful tool, but Nasa can’t return the favor when it comes to her restless sleeping due to Tsukasa’s stubbornness.

We also get some good news, in the form of the couple’s new apartment being ready. However, Arisugawa feels sad that the two will be leaving the bath house (although she seems more upset at no longer being able to peek on the couple during sexy time). But as Kenjiro Hata has shown in Hayate the Combat Butler, there’s no such thing as departures with the ones we cherish most, with an easy solution to keep the friends close for the time being. Considering that Arisugawa brings the strongest amount of comedy to the table, that’s a good thing! 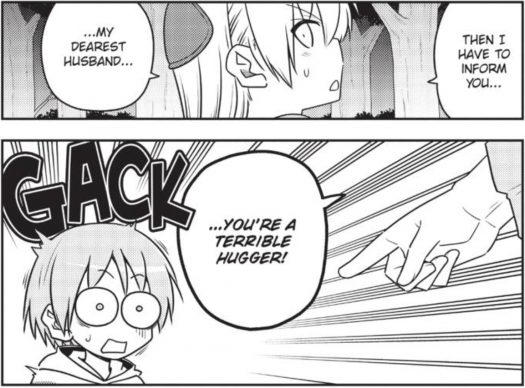 Nasa also has the opportunity to grow more in his career, with the chance to teach coding at a local high school. But his age, marriage, and looks become the bigger focus in the classroom than his actual teachings, especially since it’s an all-girls school! Thankfully, Nasa finds his groove and manages to be a new light in these students lives. That is, until we are given a hint of the school’s top student, whose name just so happens to be Kaguya!

Fly Me to the Moon delivers plenty of laughs and love in its eleventh volume. It’s easy to see why Nasa and Tsukasa are such an infectious couple, as their ways and mannerisms have enough innocence and sweetness to make any couple want to aspire to be like them. And why wouldn’t you want to wish that? After all, even if Fly Me to the Moon is a gag manga, it doesn’t hurt to want to try to be as lovey-dovey as these two! (Well, you might annoy your friends, but you can easily tell ‘em to sod off!) 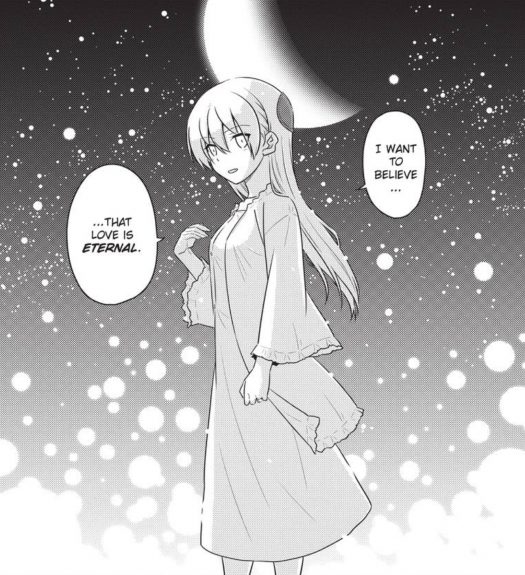