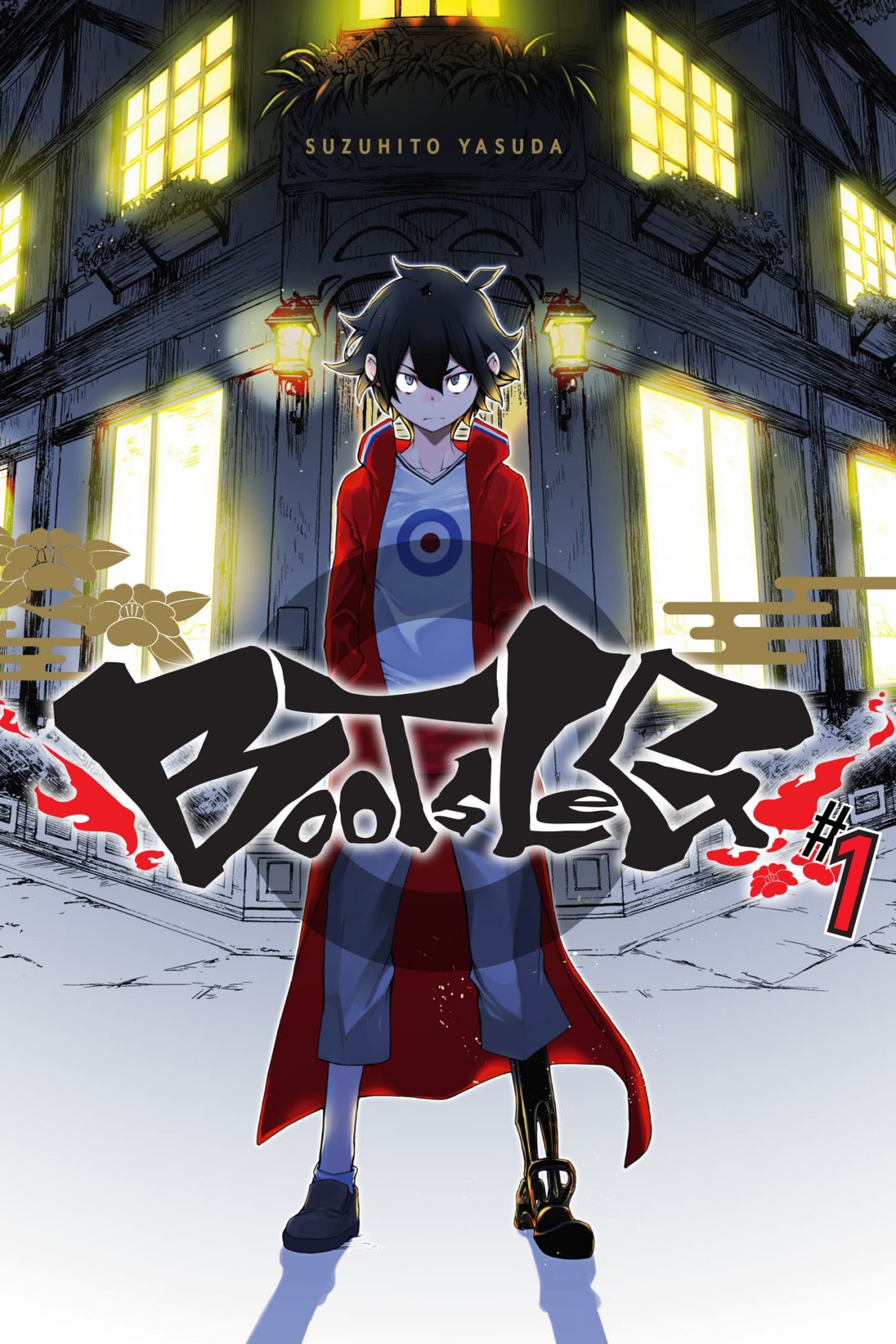 It began with mysterious hand popping through the ground. Any curious party would grab hold of it to see what would happen. Sadly, that hand had plenty of danger in its palms, as it pulled in Zen and his entire family. After the chaos, Zen found himself literally without a leg to stand on. Welcome to the world of Suzushiro Yasuda’s Bootsleg, a contender for the hottest new shonen around!

Seven years after those events, Zen finds himself constantly training for the day that Shake Hand appears again. With a nice prosthetic to keep him moving, Zen spends his days running errands and sparring with the town’s sexy doctor Lily. But when Zen finds the location of where his prosthetic came from — along with its maker Tsubaki Haikazuki — Shake Hand makes his grand return. Thankfully, Zen’s shiny leg winds up not being an ordinary replacement; it’s a source for some crazy-as-hell power! 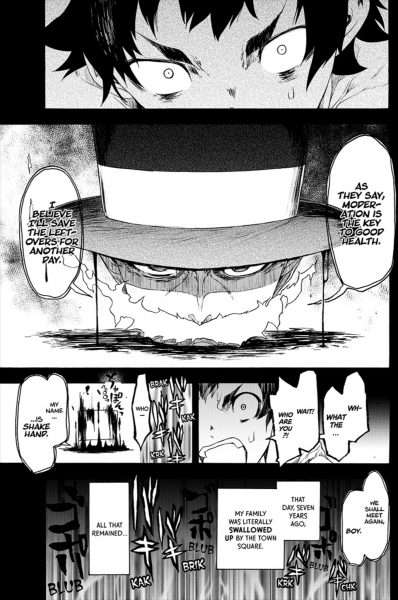 That’s when Zen is pulled into Tsubaki’s organization: the Bootsleg. There, he meets some fellow victims of the mysterious Hand-Red, all with their own need for vengeance and a knack for wearing killer shoes. From the speed king Elio to the blacksmith Masamune, everyone has their own reason for taking down Hand-Red. Just one problem: despite fighting for 100 years, Bootsleg has yet to defeat a single member of Hand-Red!

Yasuda takes his time with building the world of Bootsleg throughout its massive first volume. You immediately get a sense of how dangerous this setting is, as well as how these characters do their best to get stronger every day. Zen, Lily, Elio, and Masamune all push themselves to their limits for the sake of defeating those who took their families away. Some have a chance of being saved, whereas others — especially Masamune’s family — are long dead. It’s that level of determination that pushes the organization to fight to protect and save those who are near and dear to them. 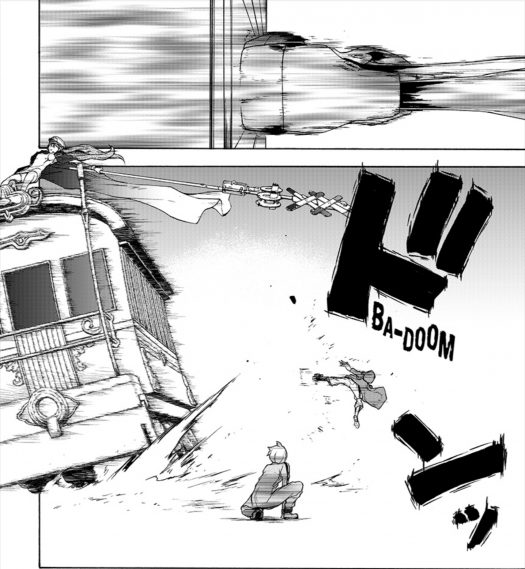 And when it comes time to fight, Bootsleg loves to keep its readers wowed! You already get a good sense of how amazing the battles will be solely from the way Zen and Lily spar. But when Red-Hand’s Shake Hand, All Abord, and God Breath You enter the foray, the action is incredibly stunning! Seeing Elio running towards the train All Abord while Zen gives it a mega kick brings forth some gorgeous visuals. Every dent, scratch, and bump is drawn with such fantastic detail, to the point where one could easily hear the mayhem this manga is showcasing!

There’s also a good sense of humor that’s present throughout the first volume. One can easily see how close Zen and Lily are, with the way the doctor teases Zen into wanting to bathe with him. Elio’s cocky attitude gives way to some solid banter between him and Zen, which becomes stronger once they start living together. Member Lingzi has her own quirks as well when it comes to her boots, to the point where it comes close to being a kink of some kind. 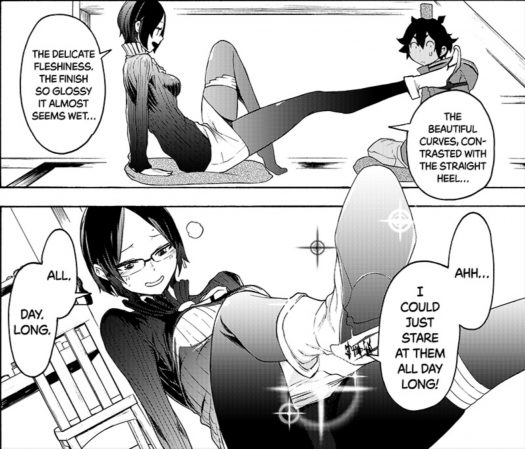 As for Masamune, there’s more drama from her than comedic moments. With Zen, Elio, and Lily still holding out hope to save their loved ones, the blacksmith is filled with sorrow knowing she can’t do anything to bring her family back. It’s why her battle with God Breath You has more rage filled in the fight, as we see a woman with absolutely nothing to lose throw everything she can at the thing that stole her happiness away. How she teams with Elio and Zen towards the end is the first beacon of light that enters Masamune’s essence in a long time, and how she’s finally welcomed into Bootsleg is a sign that she might have more of a reason to live than she initially thought.

Bootsleg is one badass shonen! The characters, art, action, and attitude that flow through its pages will hook any fan of the genre right at the get-go. This tale of vengeance and fancy footwork may share some similarities with other manga, but its execution aids in it being a giant breath of fresh air. If this level of coolness continues throughout its narrative, then you can bet that Bootsleg’s feet won’t ever fail on ya! 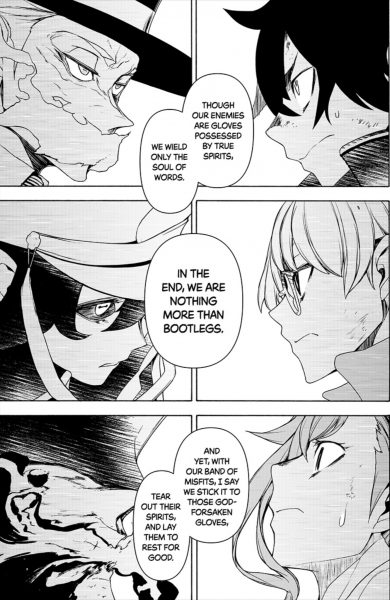