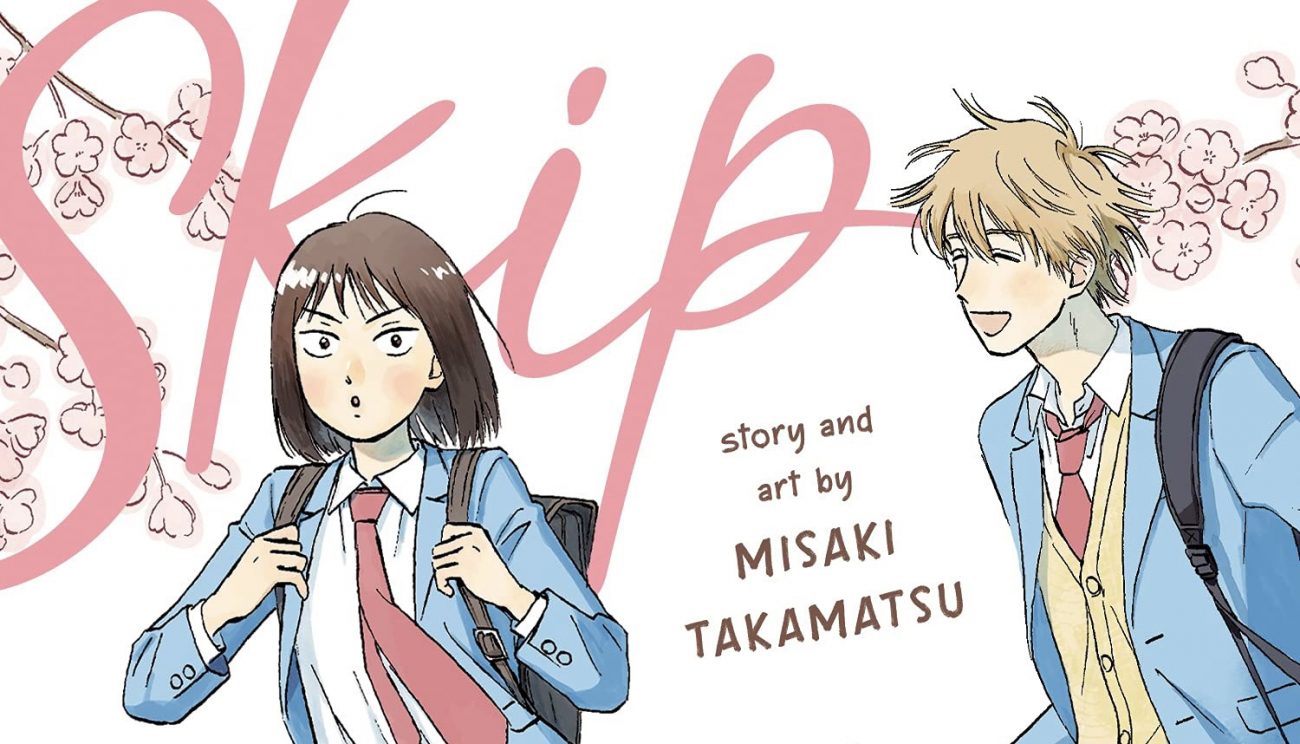 The word “wholesome” gets thrown around a lot these days, but I can’t think of a better way to describe Misaki Takamatsu’s Skip and Loafer.

Three years following its initial serialization in Japan, the critically acclaimed romantic comedy series has finally made its way to English audiences courtesy of Seven Seas Entertainment, and I couldn’t be happier. Unlike many of its contemporaries in the genre, Skip and Loafer forgoes over-the-top characters and wacky slapstick. Instead, its a grounded coming of age story more interested in situational humor and realistic slice of life drama - the perfect thing to cozy up with this Fall.

Readers follow Mitsumi, an earnest yet awkward country girl leaving home to start high school in Tokyo. She has her whole life planned out: everything from joining the student council, to graduating top of her class, working comfortably for the government into her middle age, and retiring peacefully sometime in her sixties - all predicated on making the perfect first impression during her open ceremonies speech.

Too bad she gets lost and misses her train. 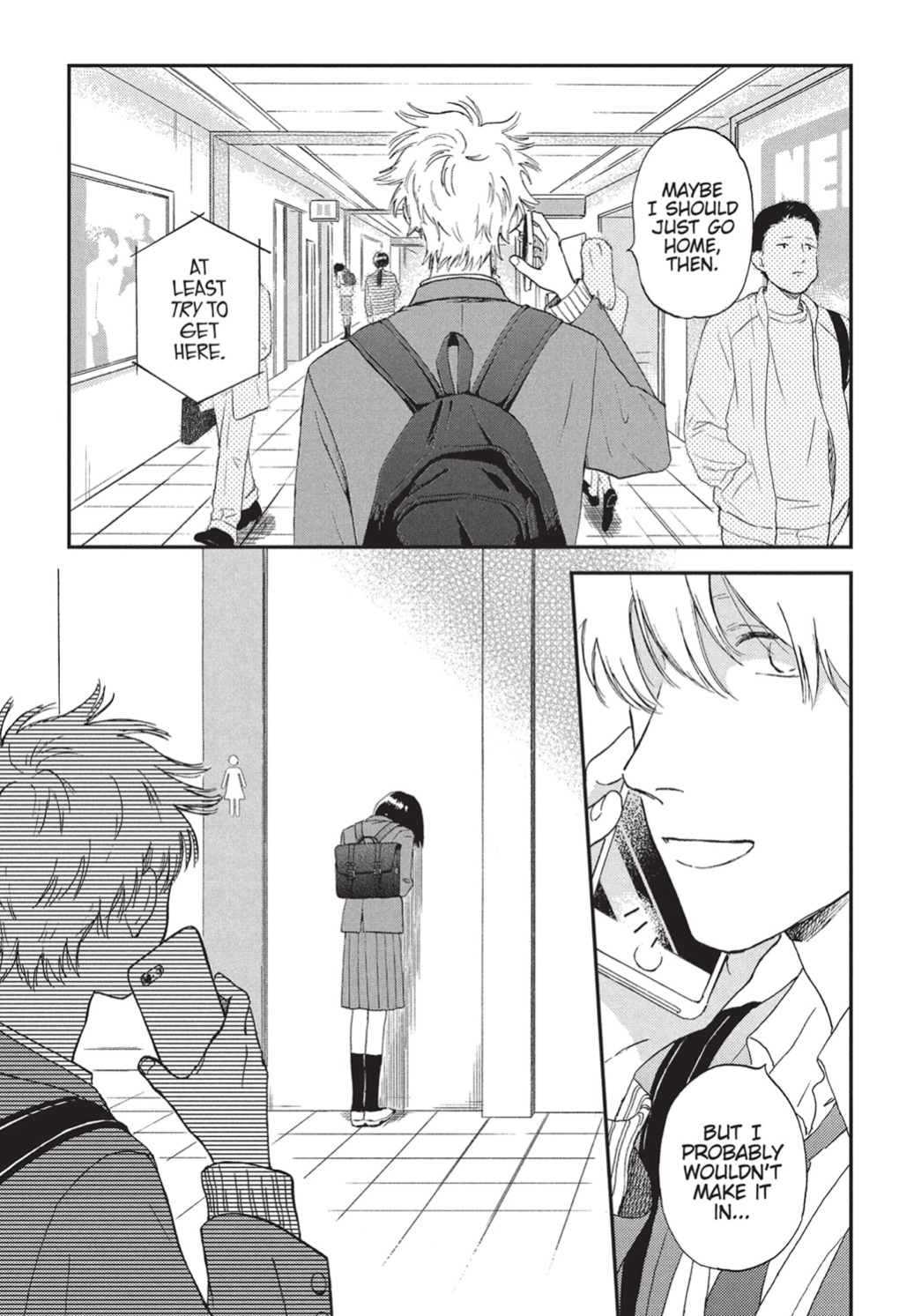 Enter: Shima Sousuke, her complete opposite.

Laidback, handsome, and a natural extrovert, he’s running late, too - and far less concerned about it than Mitsumi. Still, the two hit it off from the word go - and manage to make it to school together just before they’re missed. Their strange connection surprises their classmates, but Sousuke’s charms turn out to be just what Mitsumi needs to bridge the social gap between her and her new peers.

What follows are the daily misadventures of the unlikely duo as they forge new friendships and navigate the often rocky, sometimes hilarious, and occasionally touching trials of high school life. 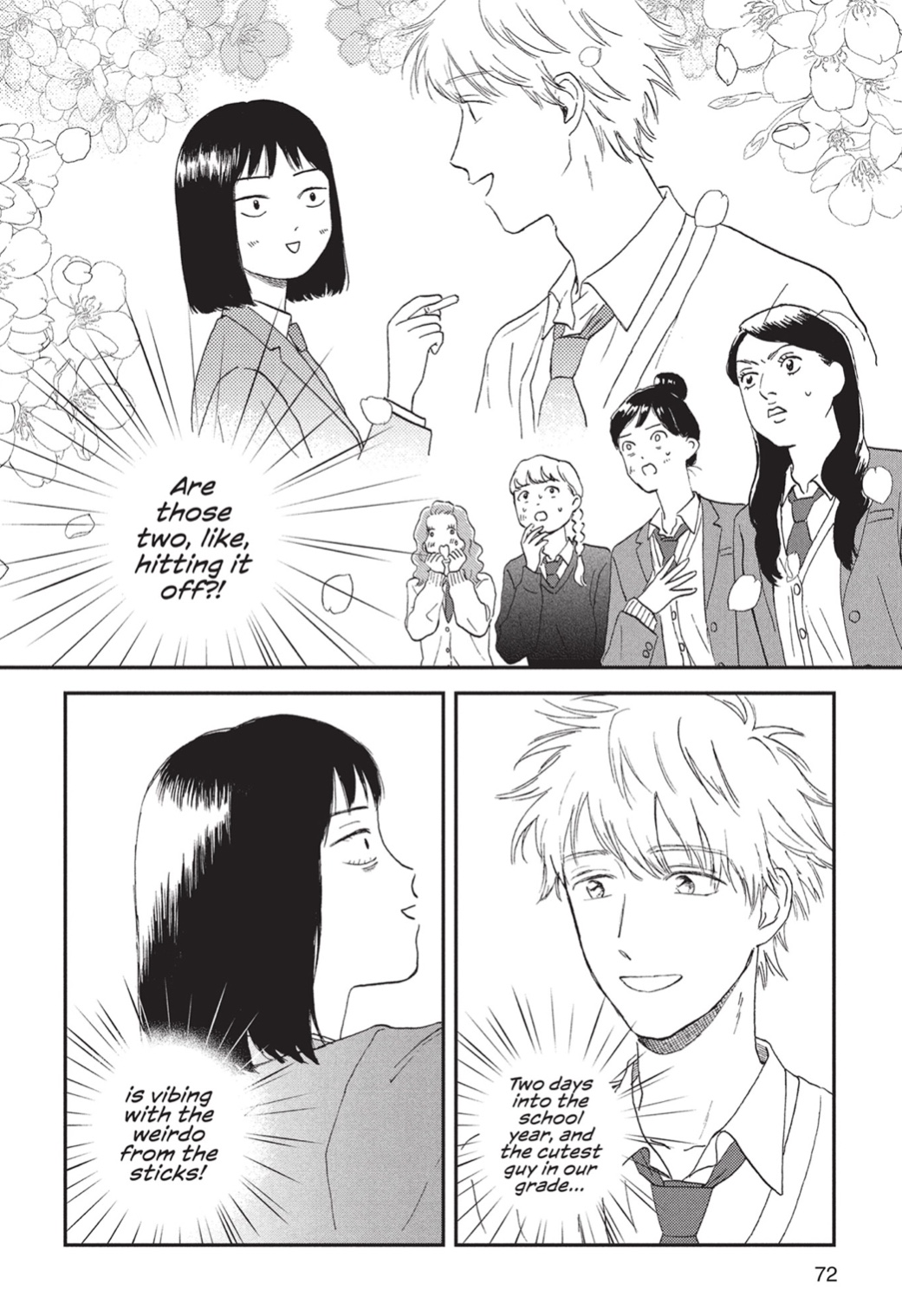 Skip and Loafer is a low stakes story, but by no means is it boring one. Its characters elevate otherwise mundane situations into engaging scenes due entirely to their chemistry with one another, and their nuanced personalities. When you boil it down, the entire volume is just teenagers hanging out (seeing a movie, singing karaoke, having lunch together) - but the characters are so well-written that’s all it needs to be. Couple that with Takamatsu’s simple yet expressive art style, and you know you have something special in your hands.

Every character introduced feels like someone I knew in high school - from their quirks to their insecurities. The things they worry about - how to stand out while still fitting in, dealing with embarrassment and crushes, getting overwhelmed by the future - are all intimately relatable, but softened by the story’s overall optimistic tone and humorous atmosphere.

Skip and Loafer is a story about how people have more in common than they are different. It’s about how reaching out to others makes for a more enriching life - even if it's hard at first. In a worse-written manga, such a message could easily come off as overly saccharine and schmaltzy, but Skip and Loafer gracefully straddles the line of sincerity without falling to the wayside and becoming sickeningly twee. 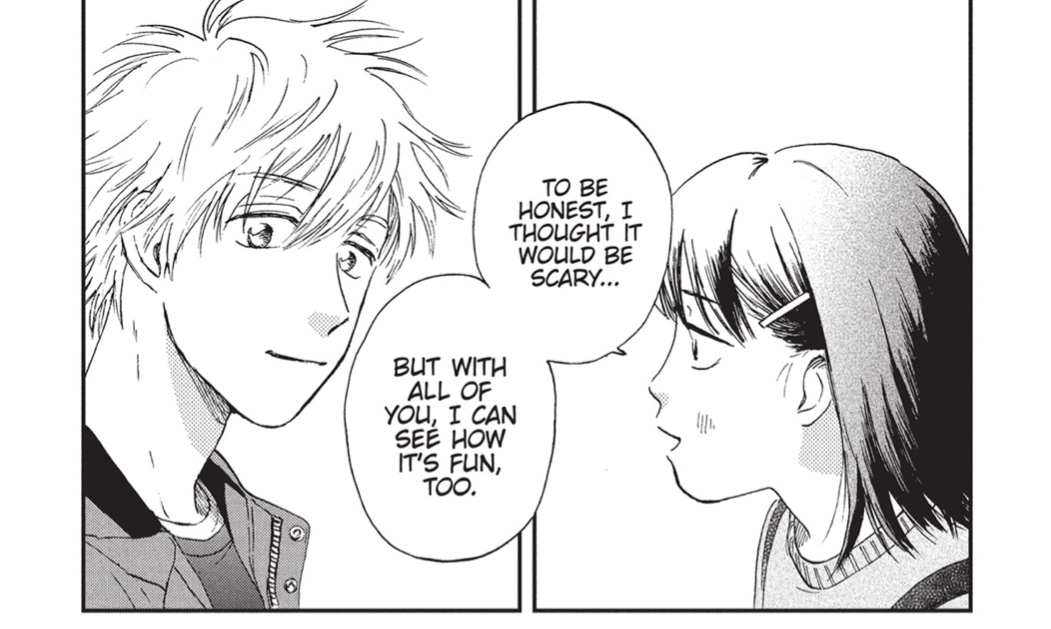 Mitsumi isn’t your average “awkward nerd” main character. She wants to make friends. She wants to be outgoing and spontaneous, and she’s not particularly shy. What she struggles with are first impressions - and that’s where Sousuke comes in. What he lacks in booksmarts he more than makes up with people skills; his easy-going personality and good looks pave the way for others to look past Mitsumi’s initial bluntness and eccentricities. Once they do, they’re quickly charmed by her straightforward and honest nature - the exact things that drew Sousuke to her in the first place.

Skip and Loafer’s main couple do what I think all romantic comedies should: become friends first. As of this first volume, the “romance” part of this series' romantic comedy leanings aren’t front and center. Sure, Mitsumi comments on Sousuke’s looks, but no more so than any of her other attractive classmates. Sousuke hasn’t behaved outwardly romantically toward her yet, but does openly prefer her company over others and seeks her out. 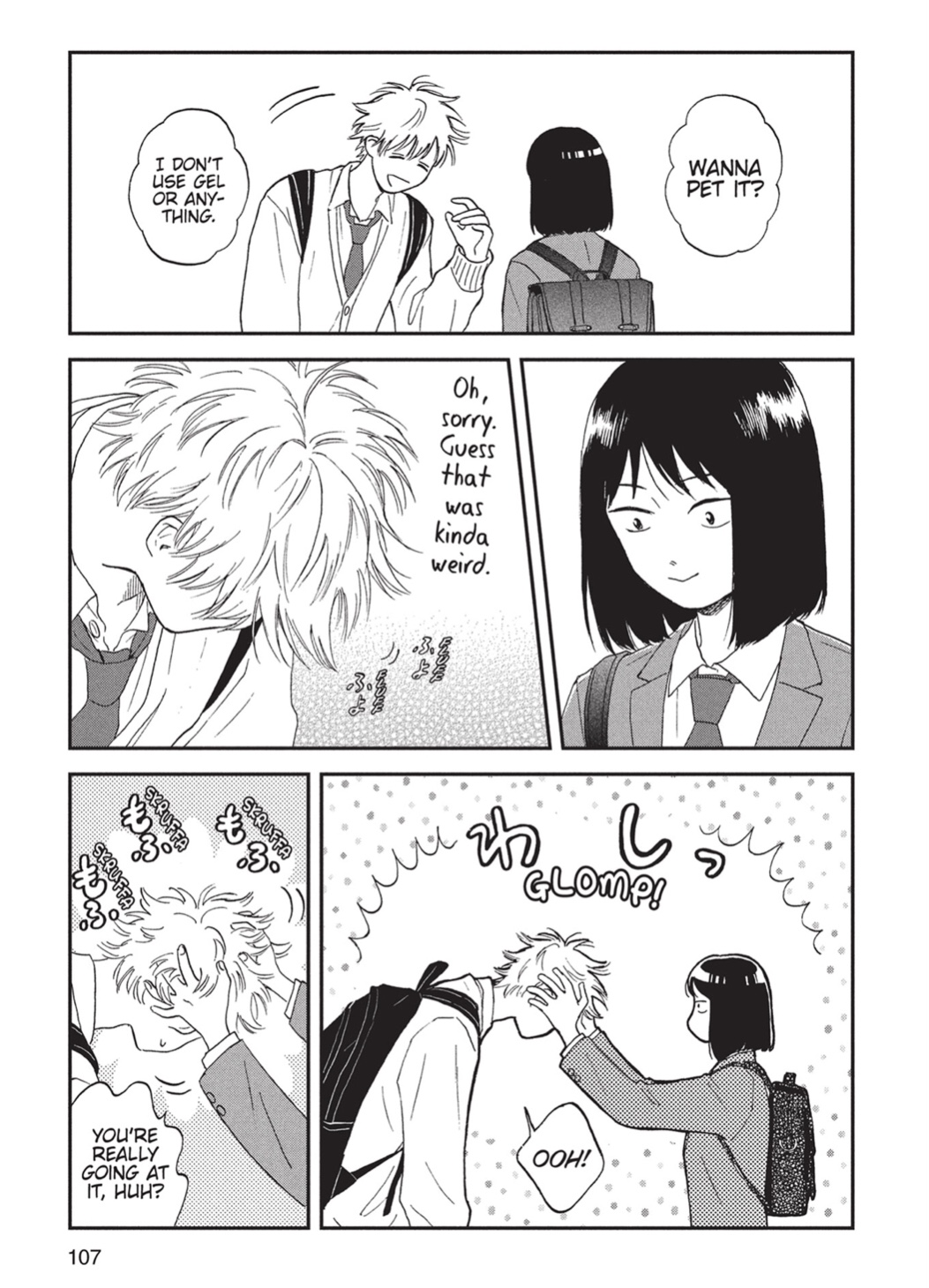 There’s a lot of good groundwork in this volume to help build toward a more realistic relationship upgrade later down the line, and I say: great! Keep things slow and steady, because I’m enjoying the ride.

This volume teases that Sousuke’s past will be a point of drama later on. He’s the most enigmatic member of the main cast; it's implied he was a child actor at some point, but wants nothing to do with the business anymore. I do hope whatever revelations come forth about his reasons for quitting don’t devolve Skip and Loafer into self-serious melodrama, but the quality of its writing so far has me at ease that it won’t.

Skip and Loafer may not be the most exciting manga in the world, but sometimes you need a break from demon lords and the isekai flavor of the week. Its the manga equivalent of a fuzzy warm blanket and a cup hot cocoa - safe, comfortable, and really hits the spot after a long day. For lovers of romantic comedies and shoujo in general, look no further than this hidden jem.