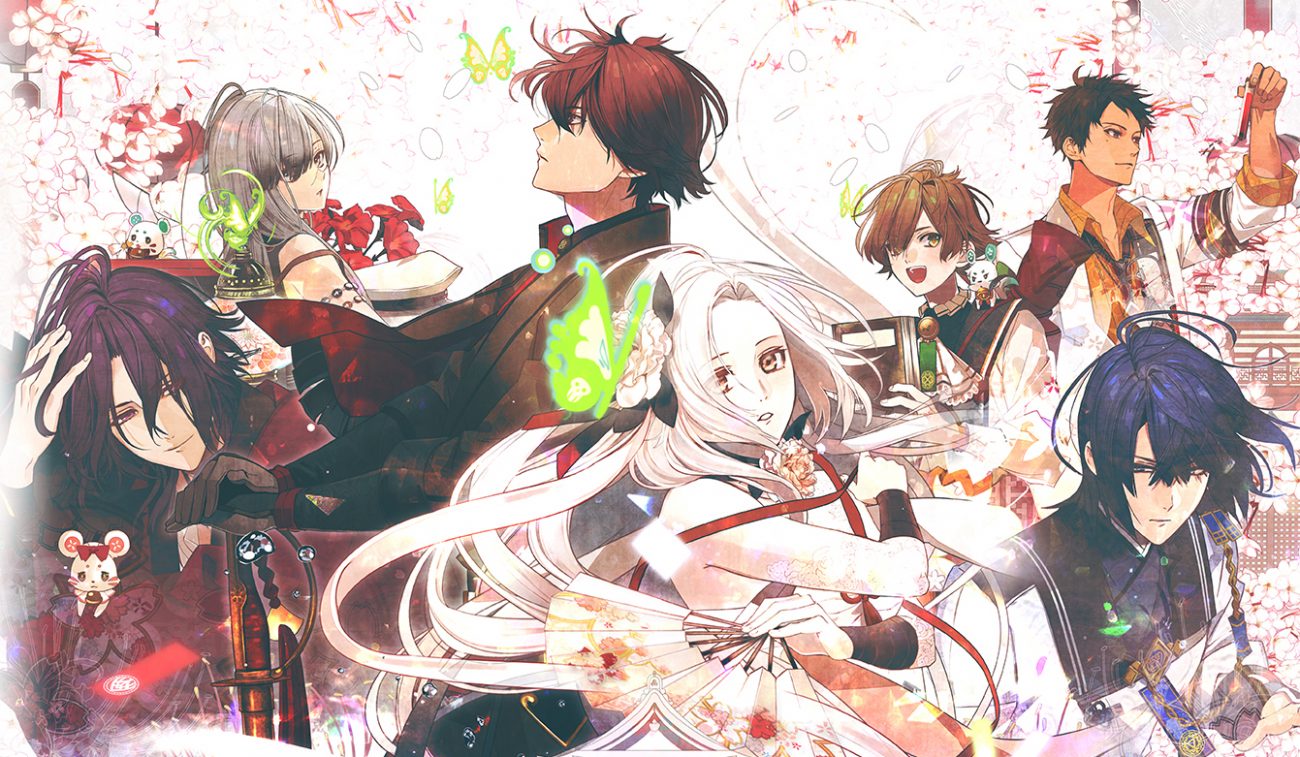 If I had to describe Olympia Soirée in two words, they would be: "delightfully shameless."

It knows exactly what it wants to be, and the target demographic it wants to hit. It charges full-steam ahead with it’s unapologetically indulgent romantic premise, and completely disregards any attempts to broadly appeal to gamers outside the niche (but growing) otome market. This is both its greatest strength, and leads to its biggest downfalls. While it will no doubt satisfy those who have been eagerly awaiting its Western debut, it's unlikely to appeal to anyone not already aware of its release.

Initially launched in Japan back in early 2020, Olympia Soirée is a romance visual novel developed by juggernaut of the VN industry Otomate, and published for English audiences by Aksys Games. Its story takes place on Tenguu Island, home to a vibrant, somewhat supernatural civilization cut off from the rest of the world. There, a strict class system exists, based on the color of one’s hair and eyes.

Certain color classes are gifted with mystical powers and elevated as nobles, while others are deemed ugly, useless, and discarded at birth. To preserve rarer color classes, and the powers they’re granted, Tenguu citizens adhere to strict marriage laws, and those who find love outside “acceptable” matches are harshly punished. 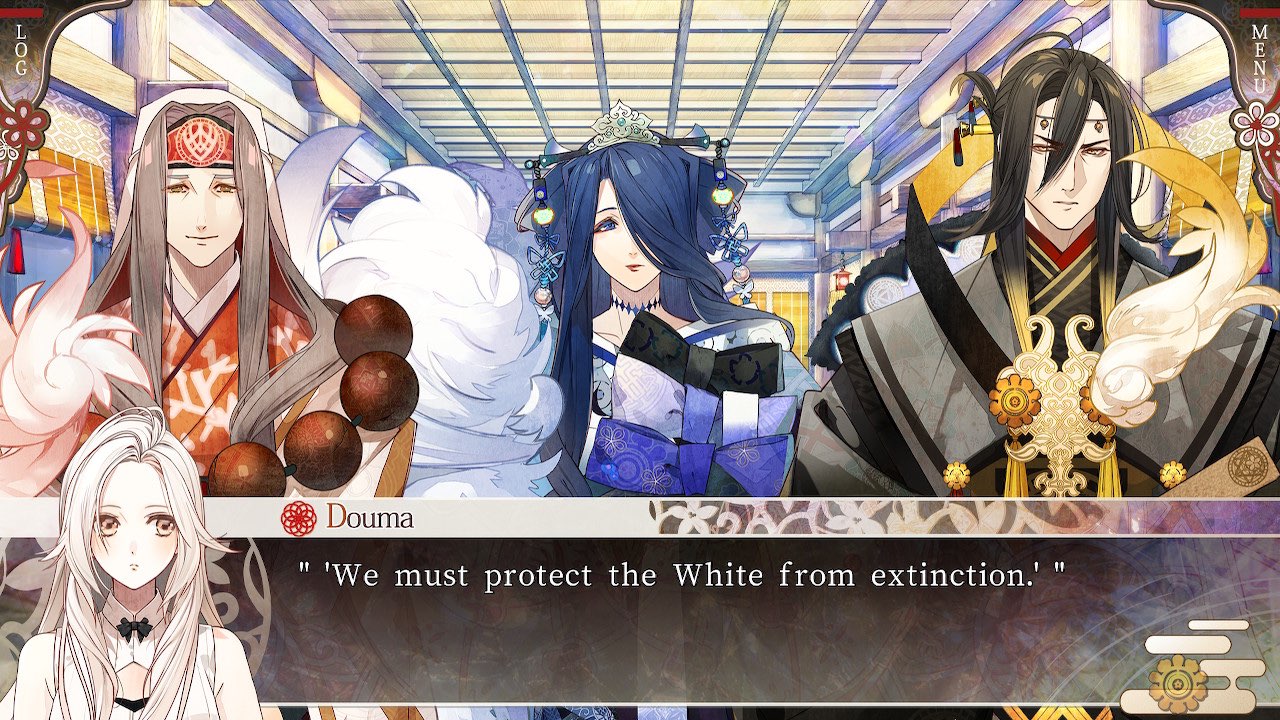 Recently turned eighteen and the sole survivor of the rare and powerful White class - descendants of the sun goddess Amaterasu - she's on the hunt for a husband to keep her bloodline from dying out. As an outsider to Tenguu’s traditions and prejudice, Olympia sets out not only to find her soulmate, but also upend the island's discriminatory institutions, and uncover the mysterious origin of the color classes themselves.

Visually, Olympia Soirée is pretty, but unambitious. Its character designs and illustrations by Satoi (recognizable from their work on the popular Diabolik Lovers and Ozmafia!! series) bring a certain elegance and delicacy to every character that I enjoyed, but wish there was more of. The number of characters given distinct portraits is disappointingly small, limited to only a dozen or so within the main cast. If the significant number of recurring minor characters present throughout multiple story routes had been given that same attention, it would have done wonders to better sell the lived-in nature of the setting. Still, the characters that were given portraits are expressive, well-acted, and attractive. The soundtrack is poignant and appropriate in all scenes, but unmemorable with exception of the beautifully gentle opening theme by ENA☆. 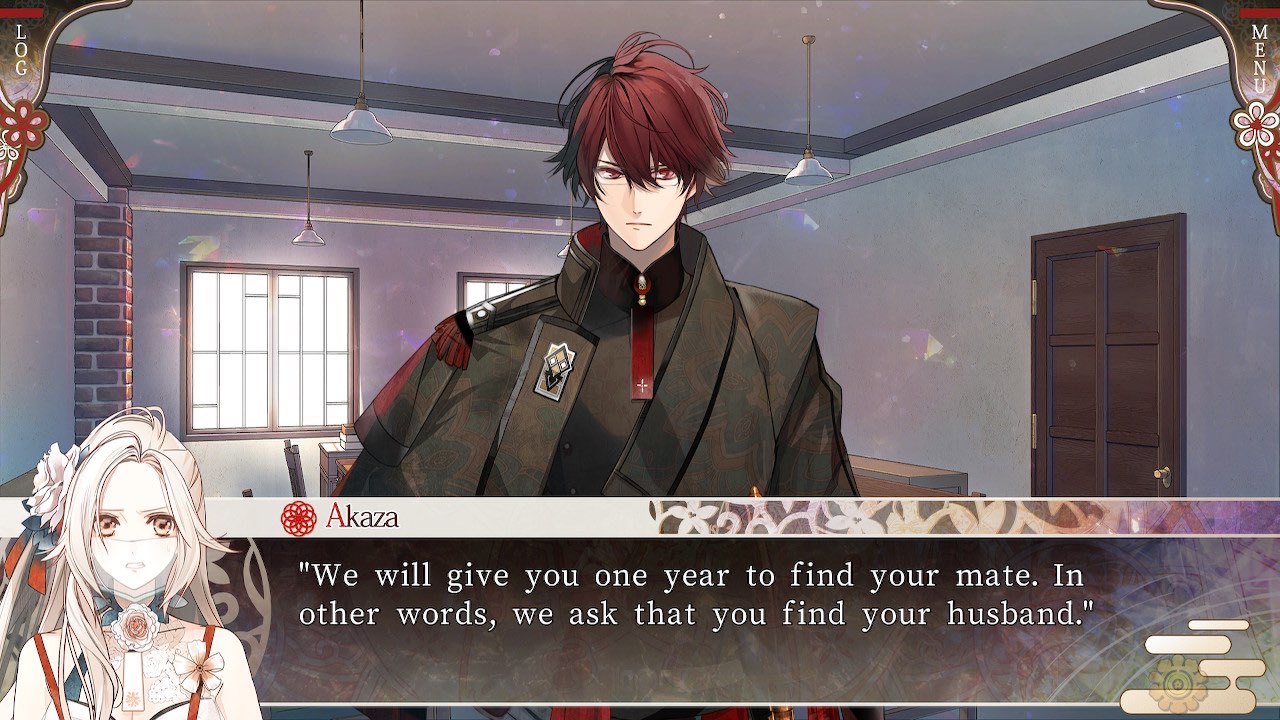 Soirée’s CGs are more of a mixed bag; some are absolutely gorgeous and a real treat for the eye, while in others characters can look slightly off-model, stiff, and anatomically awkward. None of them look bad, per say, but it's clear Satoi has a comfort zone and plays it safe more often than not. None of the art ever blew me away or left an overly strong impression - which is a shame, because while its visuals can falter at times, Olympia Soirée’s characters are a clear highlight of the game.

Olympia herself is the standout amongst the cast. She’s kind and humble, but quick on the uptake and assertive when she needs to be. There are six eligible bachelors for her to choose from, each a part of a different color class, struggling with their own insecurities and agendas. They’re all exceedingly likeable and rife with depth, given nuance through their relationship with Tenguu’s classism and their interactions with one another. Each of their romances with Olympia are uniquely touching, dramatic, and engaging. Player beware, however - the whole game is about Olympia finding a man to have kids with, so some scenes get pretty steamy. 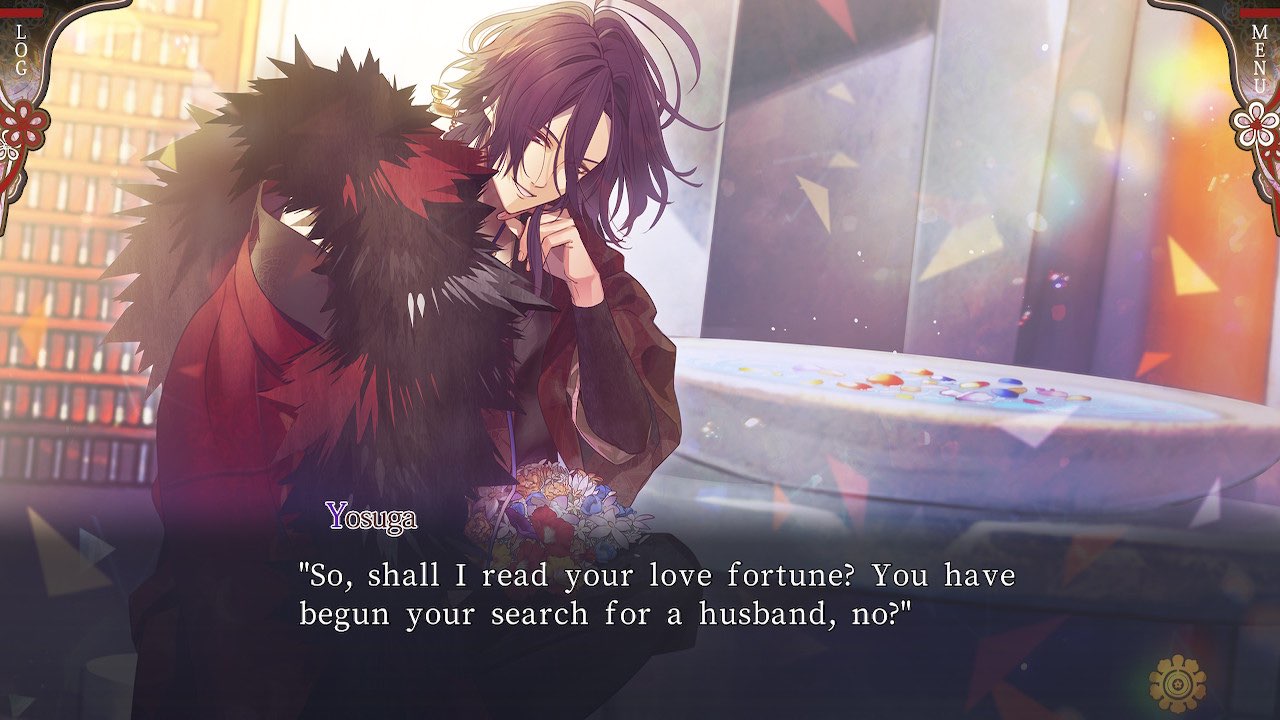 Two of the six routes are locked behind the completion of the first four; scenario writer Yuma Katagiri has released a suggested play order for all six routes, which I followed (Riku - Tokisada - Yosuga - Kuroba - Himuka - Akaza). I cannot recommend experiencing the story in this order enough, as doing so most gradually reveals the overarching narrative’s biggest twists and satisfyingly builds toward the game’s finale.

Gameplay-wise, Olympia Soirée is one of the more user-friendly visual novels I’ve ever played. Following every choice the player makes to increase affection with one of Olympia’s suitors, they’re made immediately aware whether they chose correctly by the tipping of a scale on screen. So long as you save regularly, it's easy to stay on track toward a desired ending - which is appreciated, given the length of each route. 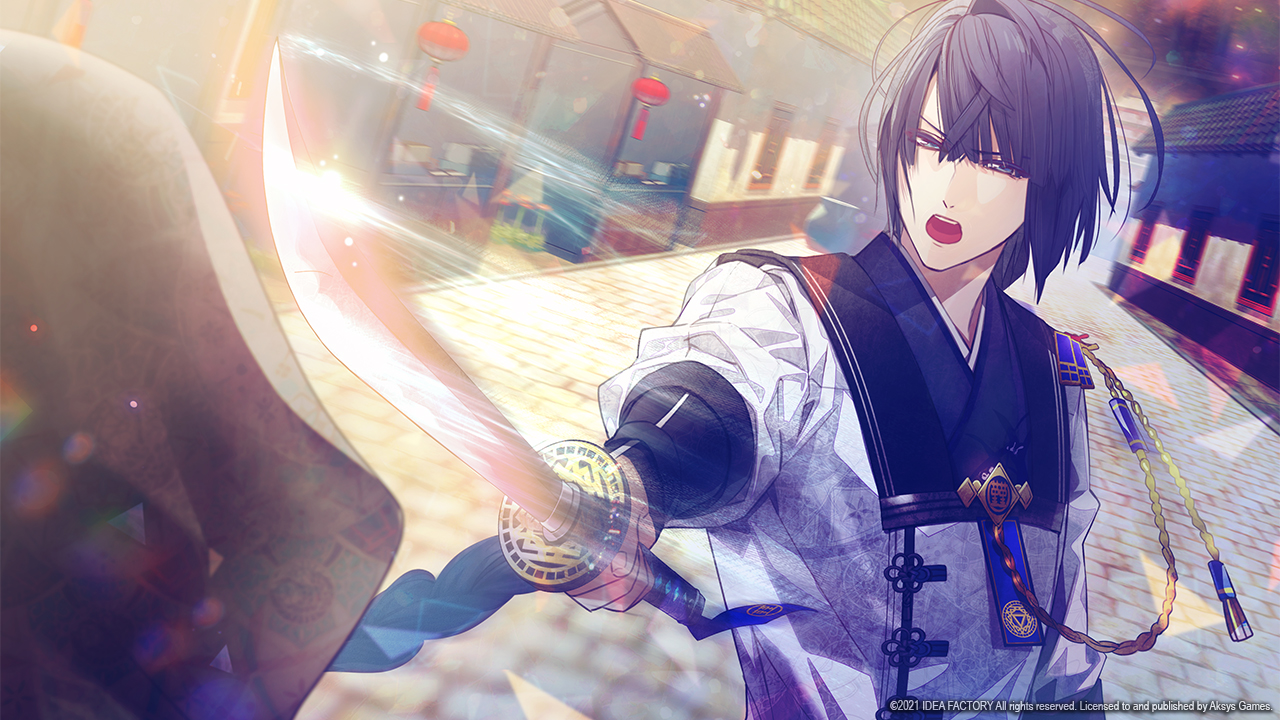 If there’s one thing I wish I’d known before jumping into Olympia Soirée, it would be just how stupidly long it is. To complete everything the game has to offer, playtime clocks in at well over sixty hours - unnecessarily so. Many scenes feel padded by superfluous dialogue that could have been cut for a more succinct experience. At times the lack of subtlety in the writing comes off as the game having no respect for the player’s time or intelligence.

Frankly, Olympia Soirée treats its players like they’re goldfish. It has a bad habit of liberally indulging in the use of flashbacks, often to the derailment of its overall pacing. Sometimes a scene will flashback to things said literally minutes before, multiple times, in a single conversation. After a few routes, this got so prevalent and annoying that it legitimately made me enjoy the story less. It felt like the game thought I was an idiot.

However, on a more positive note, in regards to the localization itself, Olympia Soirée may be Aksys’ best translation effort yet. After the considerable backlash they received following their mishandling of last year's Collar x Malice Unlimited release, the quality of Olympia Soirée almost feels like an apology. I spotted very few misspelling and can't recall any glaring formatting mistakes. I hope they continue to adhere to this high standard of quality going forward. Also, they get bonus points for a recent post-release patch that translates previously non-subtitled voice lines that occur while menuing in the title and save screens.

Despite all my criticism, I did enjoy my time with Olympia Soirée - I just wish it was a bit more polished. It's so close to being great, but didn't get there for me. Still, while not for everyone, and accounting for its lacking subtlety and stumbling in the pacing department, I do ultimately recommend it for lovers of the trope-ier aspects of the romance genre as a whole. It has moments of brilliance - you just need a heap of patience to get there.