HomeComics/MangaMANGA REVIEW | "No. 5" - Volume One 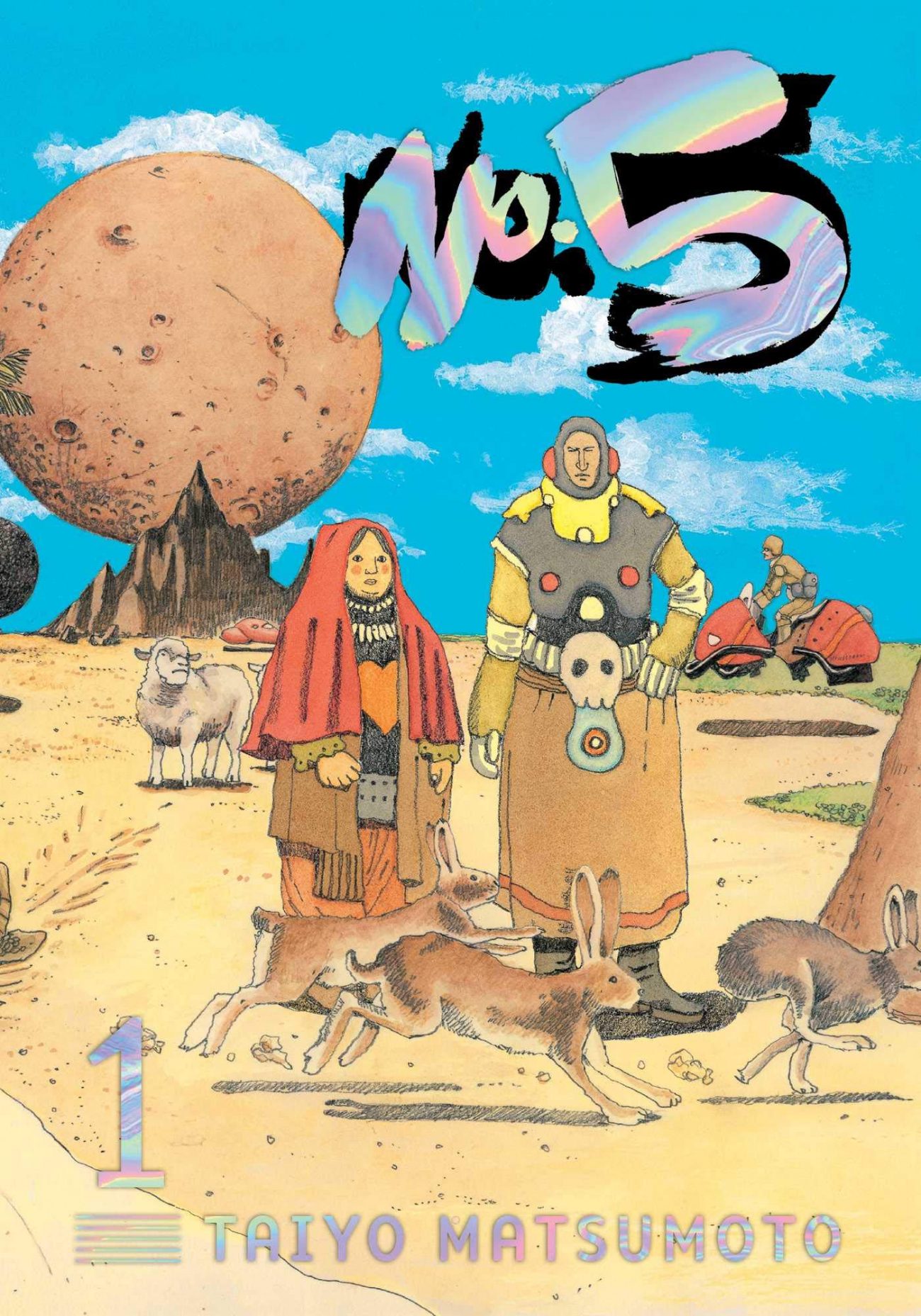 One can be abstract with their storytelling, so long as it’s still easy to follow. Sometimes the usage of symbolism or metaphors can help with letting readers know what’s going on. A writer can also hold back from showing their strongest cards, but only if one or two are presented to give their audience an understanding of the situation. What I’m trying to get at is this: I read through all 315 pages of Taiyo Matsumoto’s first volume of No. 5, and I still have no idea what the hell’s going on!

Matsumoto is no stranger to, well, being strange. His works like Tekkonkinreet and Ping Pong are some of the weirdest works of manga around. But at the very least with those two stories, it was easy to get a handle of its narrative and story beats. But with No. 5, any means of following along with the story is thrown out of the window. Because of this, it’s hard to grasp what exactly Matsumoto is trying to convey. 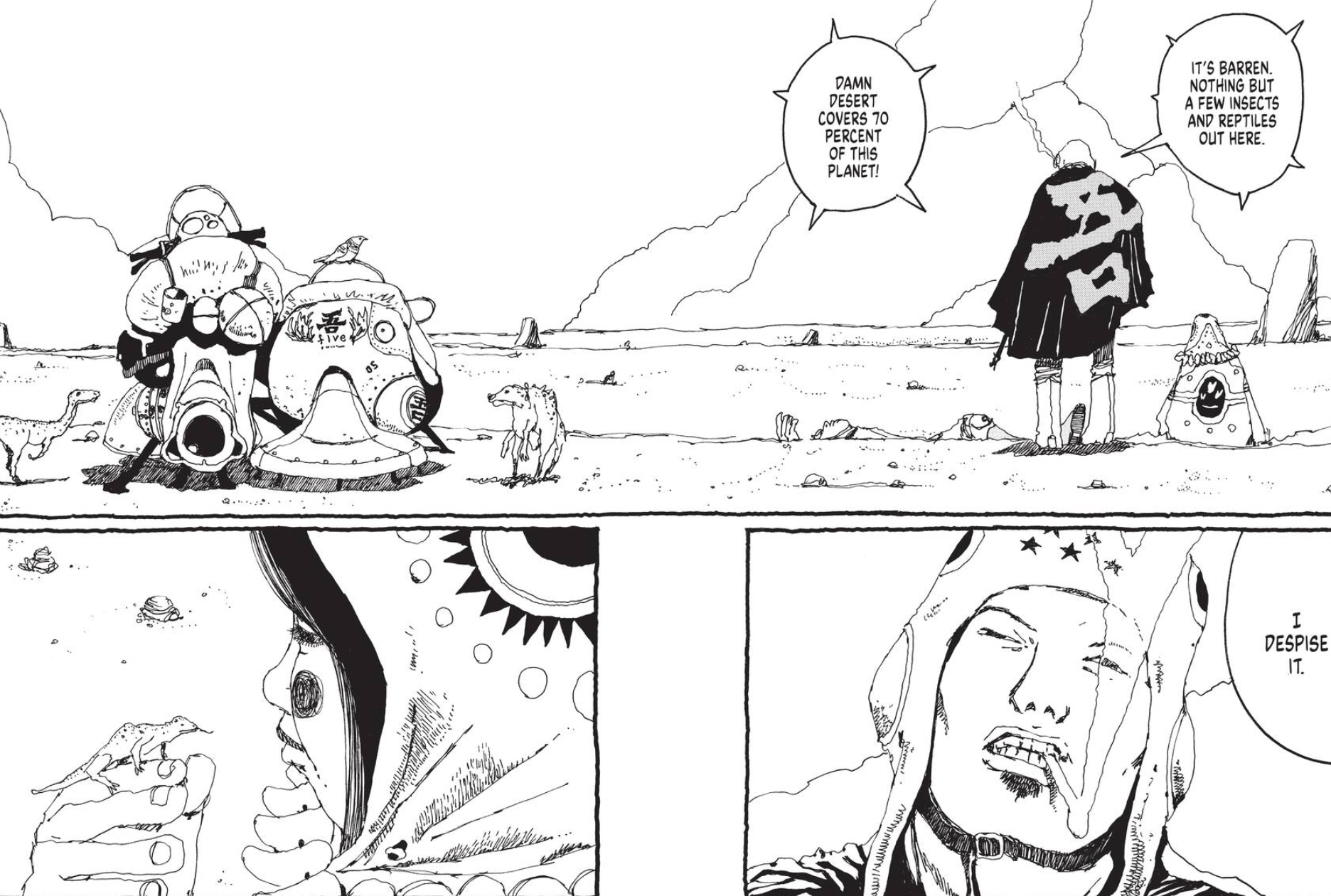 Let’s at least try to sum up No. 5’s main story though. A group known as the Rainbow Council of the Peace Corps tries to keep things at bay. The world is nearly all-desert, and those in the Peace Corps are treated practically like deities. However, a member known as No. 5 turns his back on the organization, and starts assassinating them one after another. In a calm panic, the other members try to figure out where No. 5 is, and put a stop to his seemingly meaningless killings.

The thing that’s a big draw to No. 5 is its visuals. Those who know of Matsumoto’s works are familiar with the fact that he doesn’t draw his panels like most manga artists do. His style is very doodle-like, with a similar vibe to that of Mike Judge or Bill Plympton. It’s unique for manga, with a style that could’ve fit well with an early 90s grunge rock album cover or a selection in Spike & Mike’s Sick and Twisted Film Festival. 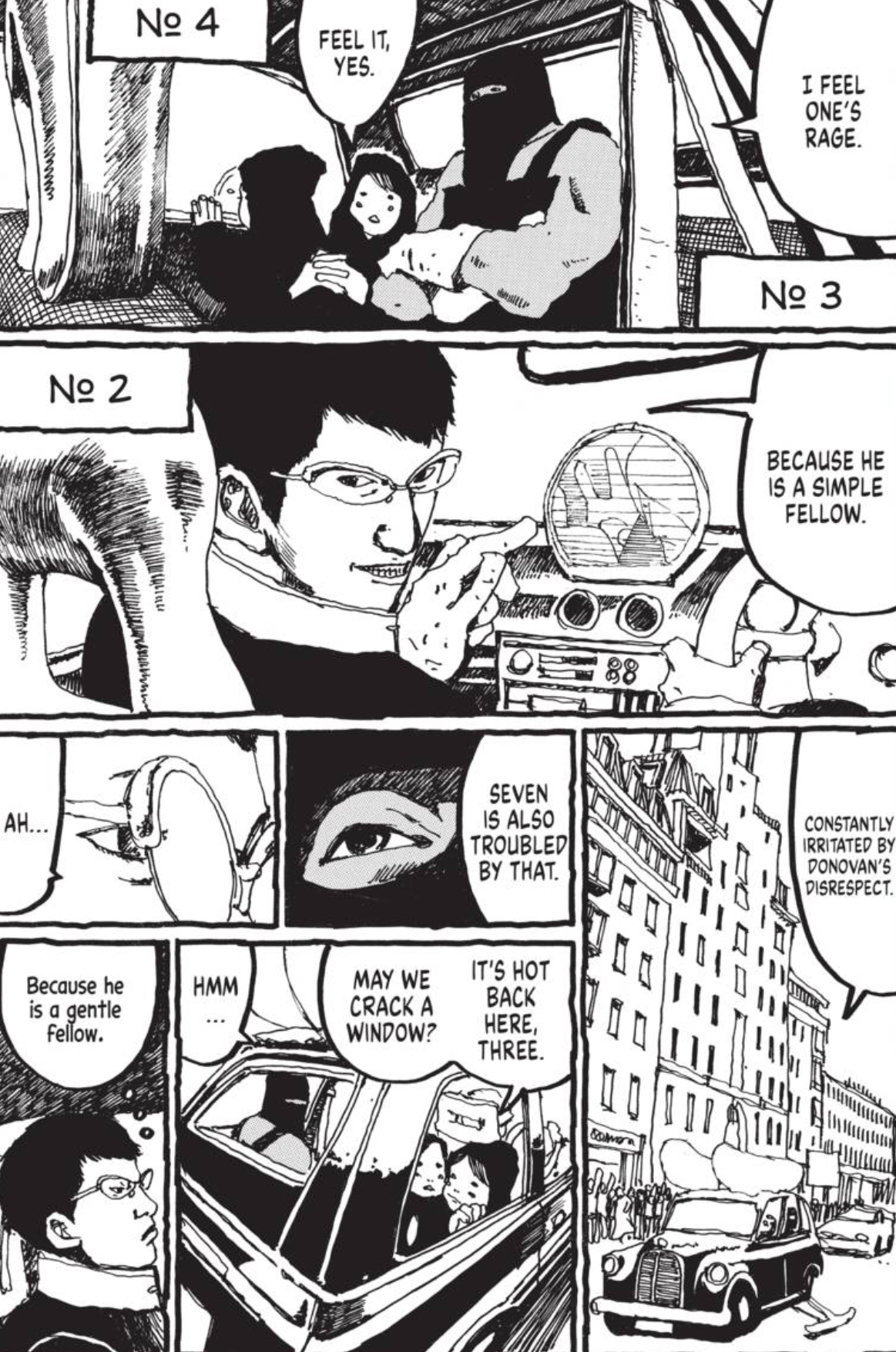 Where the panels shine the brightest are in its action sequences. When No. 5 goes for the kill, there’s a great sense of danger and fright presented through Matsumoto’s drawings. The battles and the final kill are showcased roughly, but it conveys the freakiness of unexpected death and destruction visually as it does emotionally. From an artistic perspective, this is where the series is at its strongest.

Unfortunately, it’s the rest of No. 5 that makes it an impossible series to recommend. I was not exaggerating when I said I had no idea what was happening. As I read through the entirety of this first volume, my mind shouted in confusion like Jason Mewes during the end of Dogma. While I understood the main aspect of Matsumoto’s story, what was being conveyed by the rest of the Rainbow Council was — to me — nonsensical. 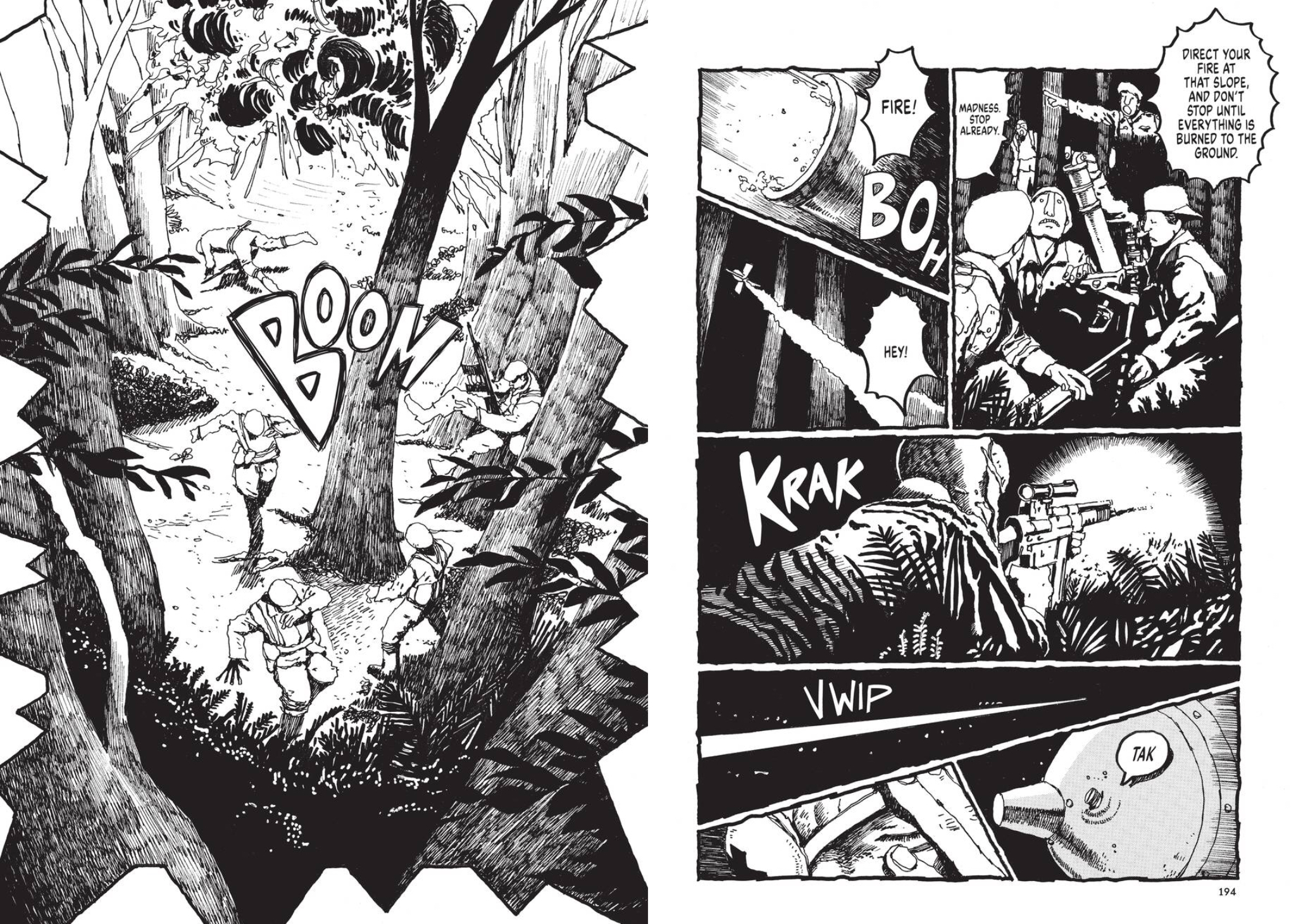 And it’s fine if an author wants to be abstract with their characters’ dialogue, so long as it pays off in the end. But by the time I turned the final page, I couldn’t get an understanding of No. 5’s motives, nor the mentality of the other members of the Rainbow Council. It all felt like they were trying to speak poetically, in a way that feels both artistically forced and spiritually hollow. To be frank: it’s lazy to sound smart without actually being smart, and this series is guilty of that in so many ways.

Thus, No. 5 can be seen as a massive step back from Matsumoto’s impressive resume. It’s great visually, and is perhaps the only reason why people should look at it. On the other hand, reading it is like running through an obstacle course that is both trying to kill you and has its goal completely walled up. You can come to No. 5 for the art, but by all means run the hell away from everything else it’s trying to serve! 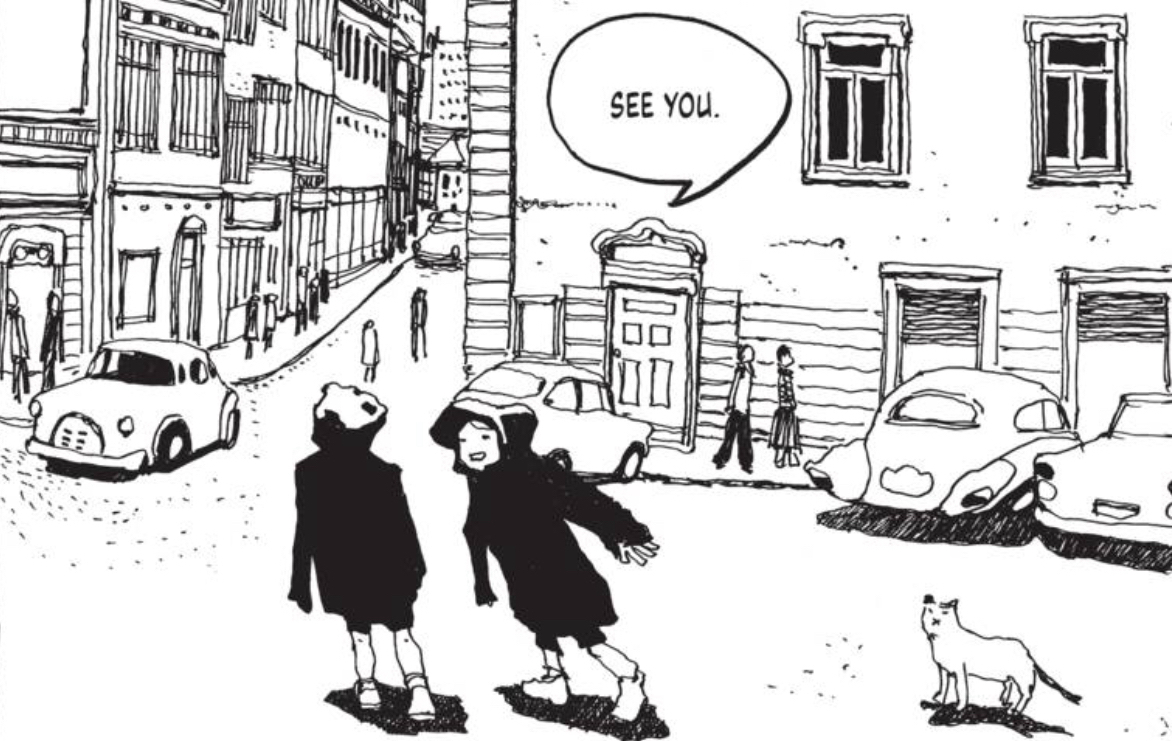