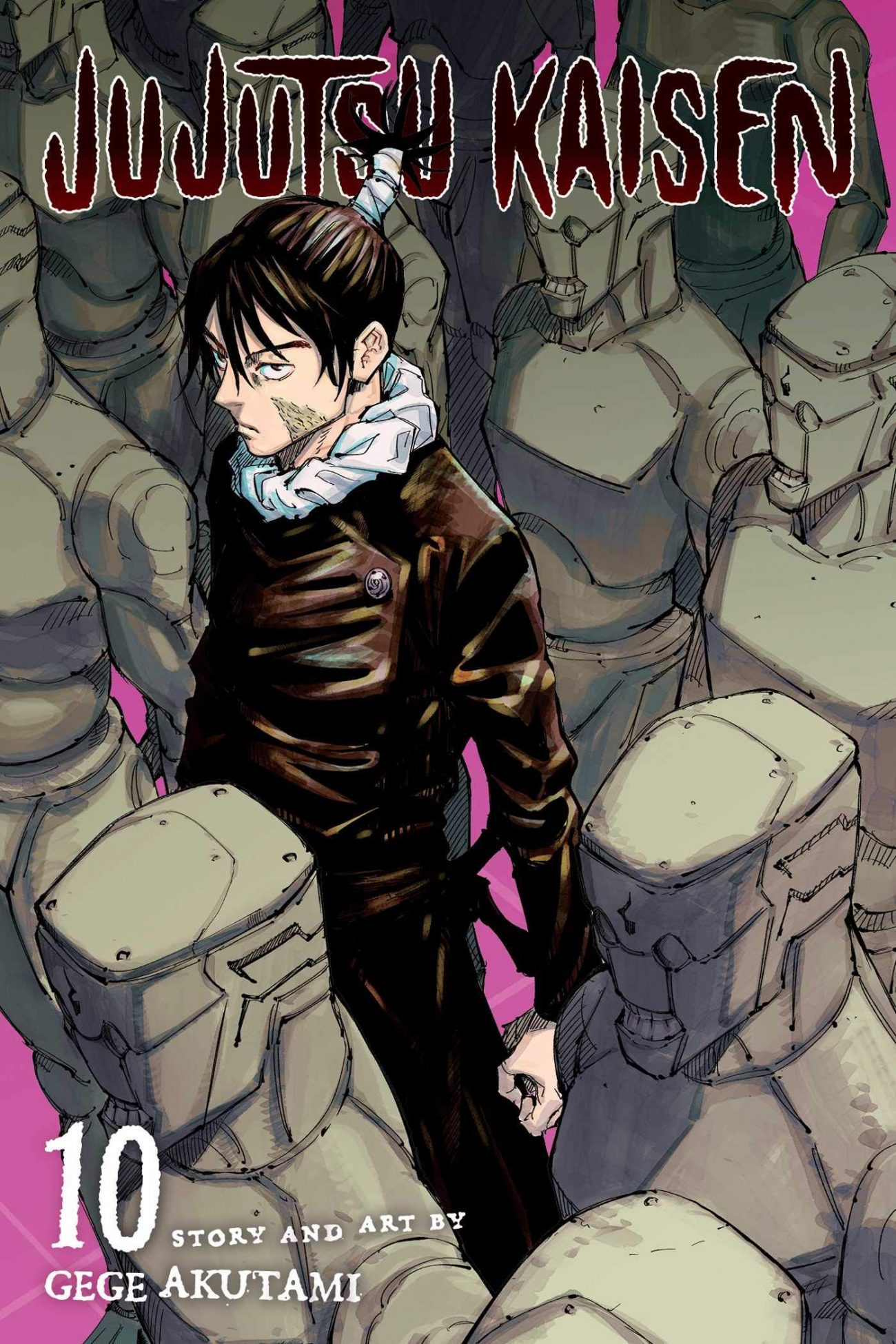 When it comes to the narrative of Jujutsu Kaisen, it has its ups and downs. However, it’s in the fights where the burning spirit of Gege Akutami’s series roars at its most fiercest. In its tenth volume, not only does Jujutsu Kaisen demonstrate its spirit gleefully, but also with maddening skill and beauty. Perhaps this is why this particular chapter pulled me in harder and faster than anything else this series has done in the last few months.

Volume Ten starts out where the last one left off, as it’s revealed that Kyoto High’s Kokichi Muta is a mole for Mahito. However, it’s quickly revealed that this was all a plan for Muta to get close to him, and begins to let everything loose at the villain. With a massive Mechamaru at his disposal, Muta fights with all that he’s got to take on Mahito and his great strength. But as the fight goes on, the Shibuya plans for Halloween begin to sow their seeds. 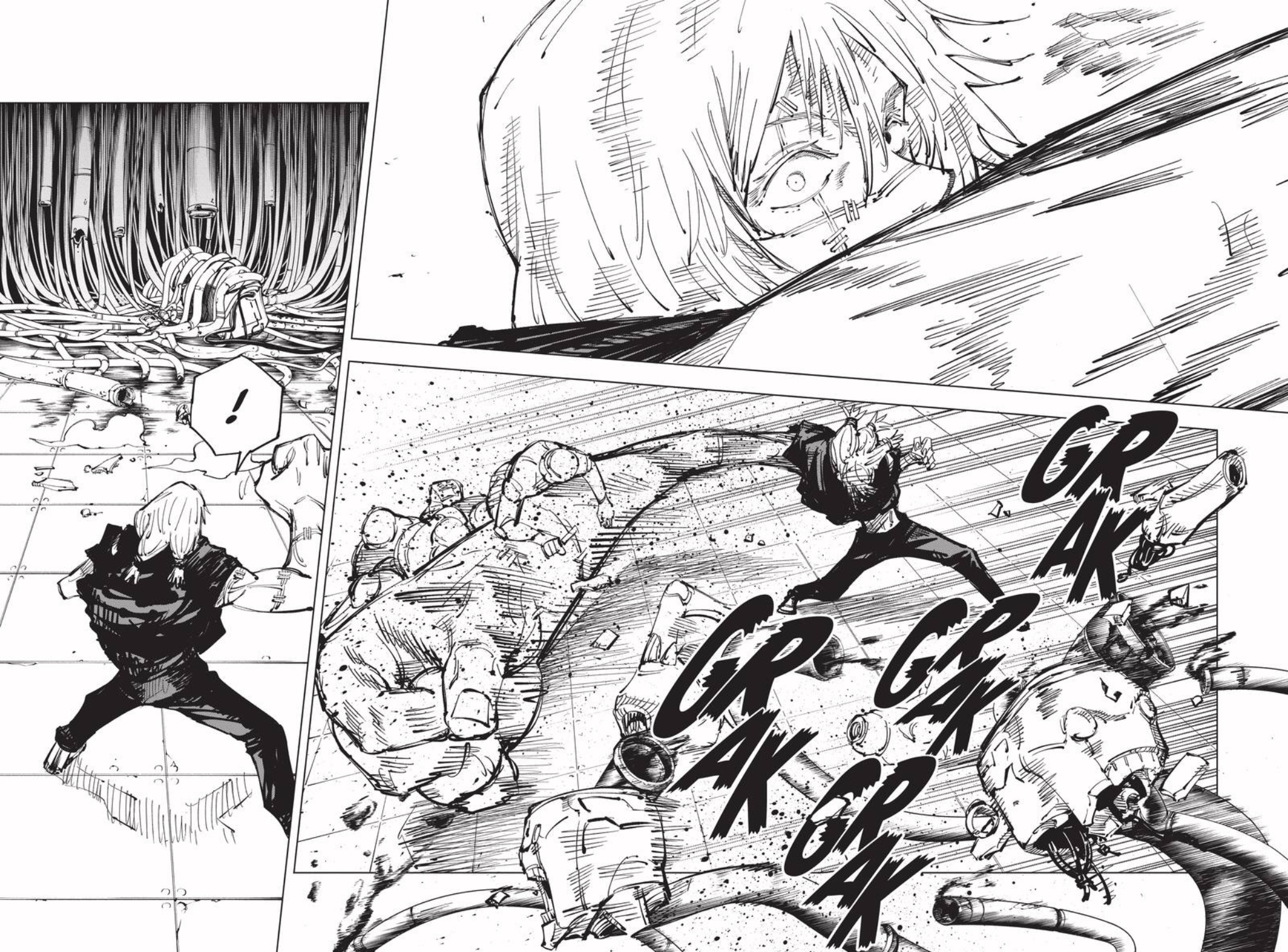 When the day finally arrives, Gojo faces off against Jogo & Hanami in order to save a plethora of people on a train platform. Meanwhile, Itadori dukes it out against a grasshopper curse, who talks his intelligence up despite his dumb mannerisms. While the clock winds down for the next train to arrive, Mahito starts to prepare for some bloody anarchy to unfold.

While it was a shocker that Muta was seemingly helping Mahito infiltrate the area, it’s a nice breath of relief to see him use this closeness as an advantage to try and take him down. Hence why his fight inside a massive Mechamaru brings forth a new level of badassery to Jujutsu Kaisen. Him being cured of his weaknesses gives him the opportunity to show the readers what he’s truly capable of. Yes, he’s still fighting within a robot, but it’s cool seeing him use it like Roger Smith helming Big O! 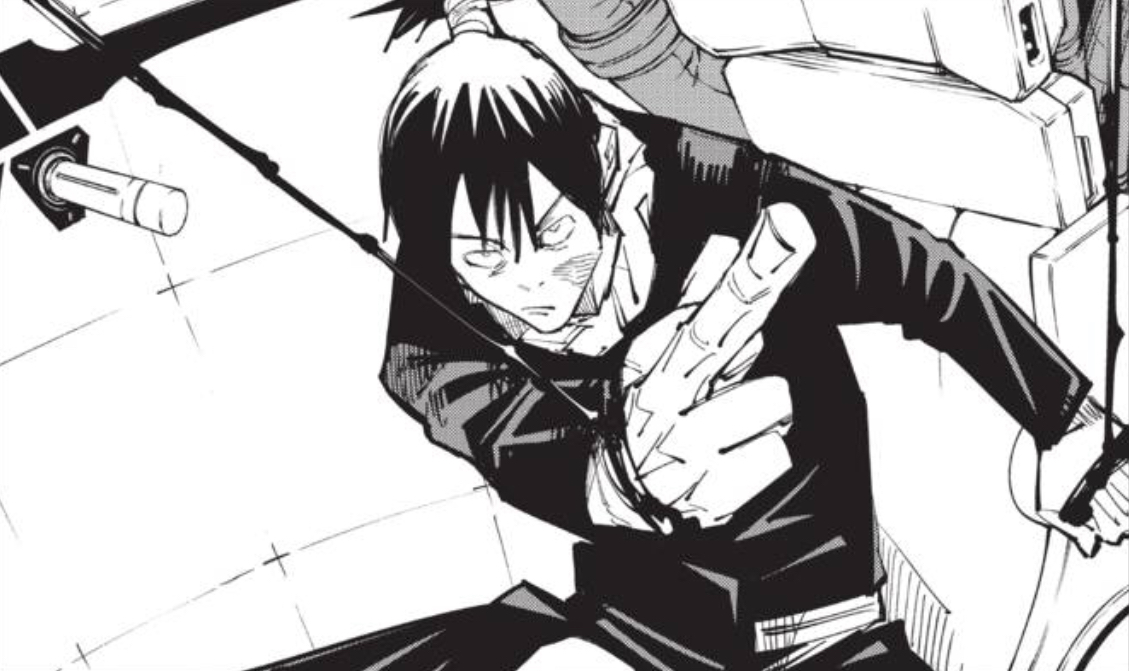 Even more sweet is seeing Mahito panic during this fight. For a Cursed Spirit that’s known to play it slick, it’s fun to see him lose his cool demeanor in the midst of battle. The look in his eyes is filled with regret, knowing full well that he’s given power to quite the monstrous Jujutsu Sorcerer. It gives me hope that we’ll see Muta fight with this level of strength in the future (so long as he’s still alive, given that his fate isn’t exactly known).

Once the spotlight is placed back on Gojo and Itadori, the fights begin to amplify even more so. Gojo’s battle with Jogo & Hanami has the three throwing every sort of technique and power from their arsenal. It’s a display of true strength from the fighters, with Gojo not losing his usual demeanor to the sight of death and destruction happening around him. When he gets even the slightest pissed at the Cursed Spirits, his ultimate tactics seep out to showcase some frightening moves. 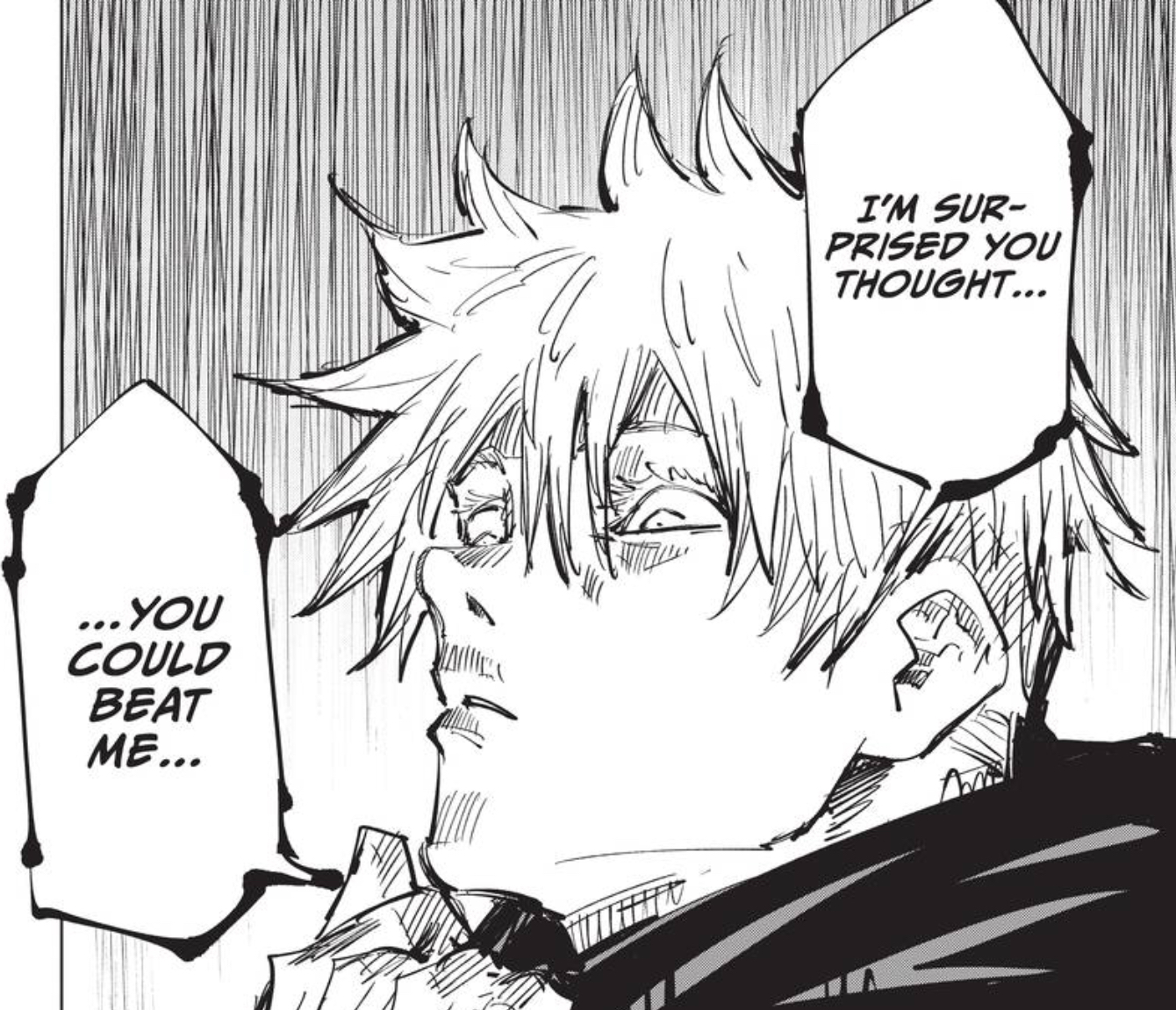 The same can be said about Itadori, whose fight with the grasshopper curse is a mixture of action and humor. Itadori’s not the kind of guy who can stand being around dumb folk, despite his intelligence waning here and there. But as he hears the kinds of things the grasshopper is saying, Itadori gets fed up enough to just wallop it to death. It’s an exchange that brings forth as many laughs as it does cool fight shots, something of a trademark of Itadori these days.

Jujutsu Kaisen brings back their A-game in its tenth volume, thanks in part to its impressive fights and scary foreshadowing. The final scenes set the stage for the chaos that’s about to be unleashed, with many frightened onlookers staring at the jaws of many cursed beasts. Will Gojo and Itadori be able to rescue everyone? Probably not, but they’re gonna try anyway! And when they do, one hopes its presentation has as much of a wow factor as this volume did. 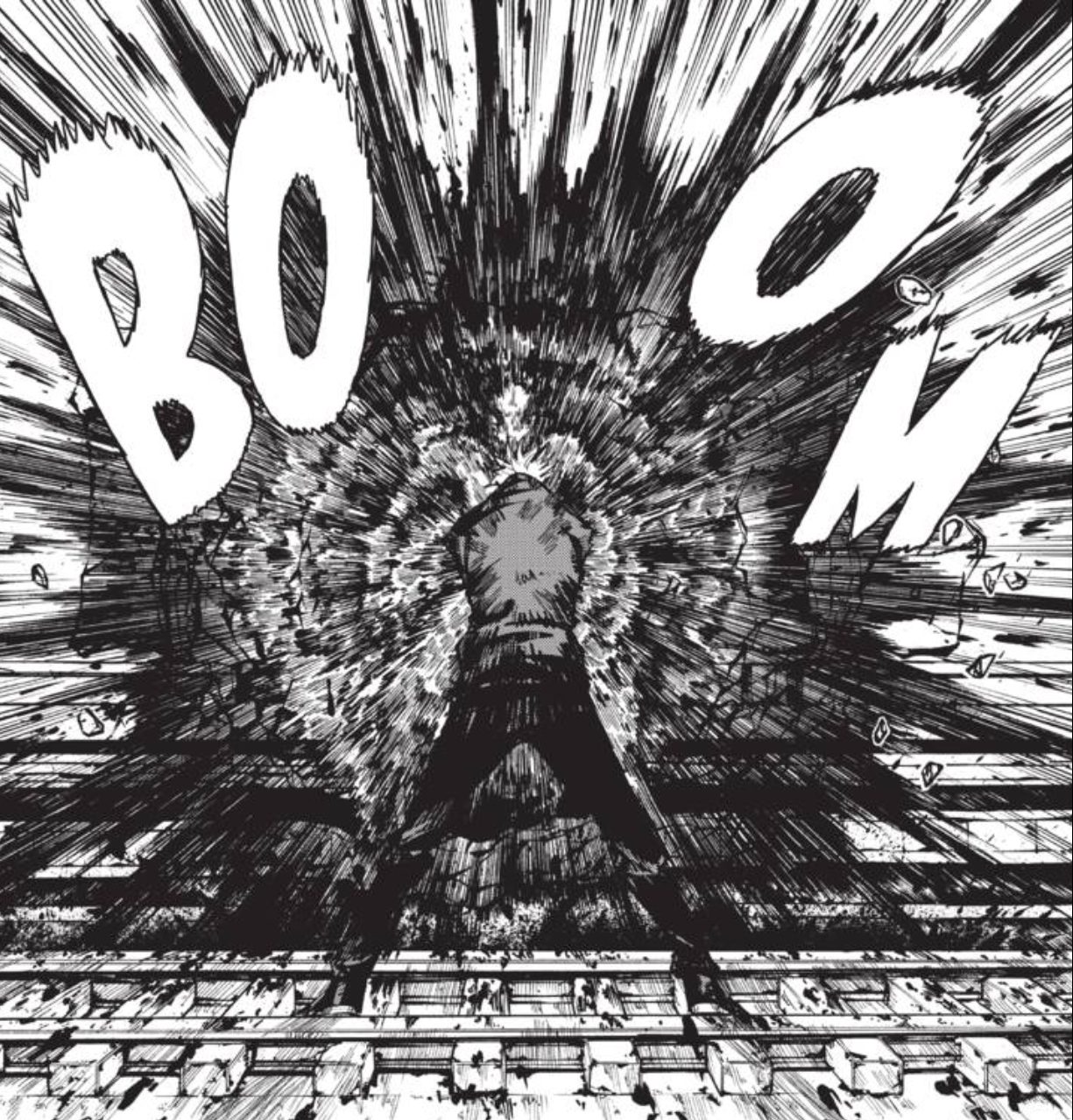