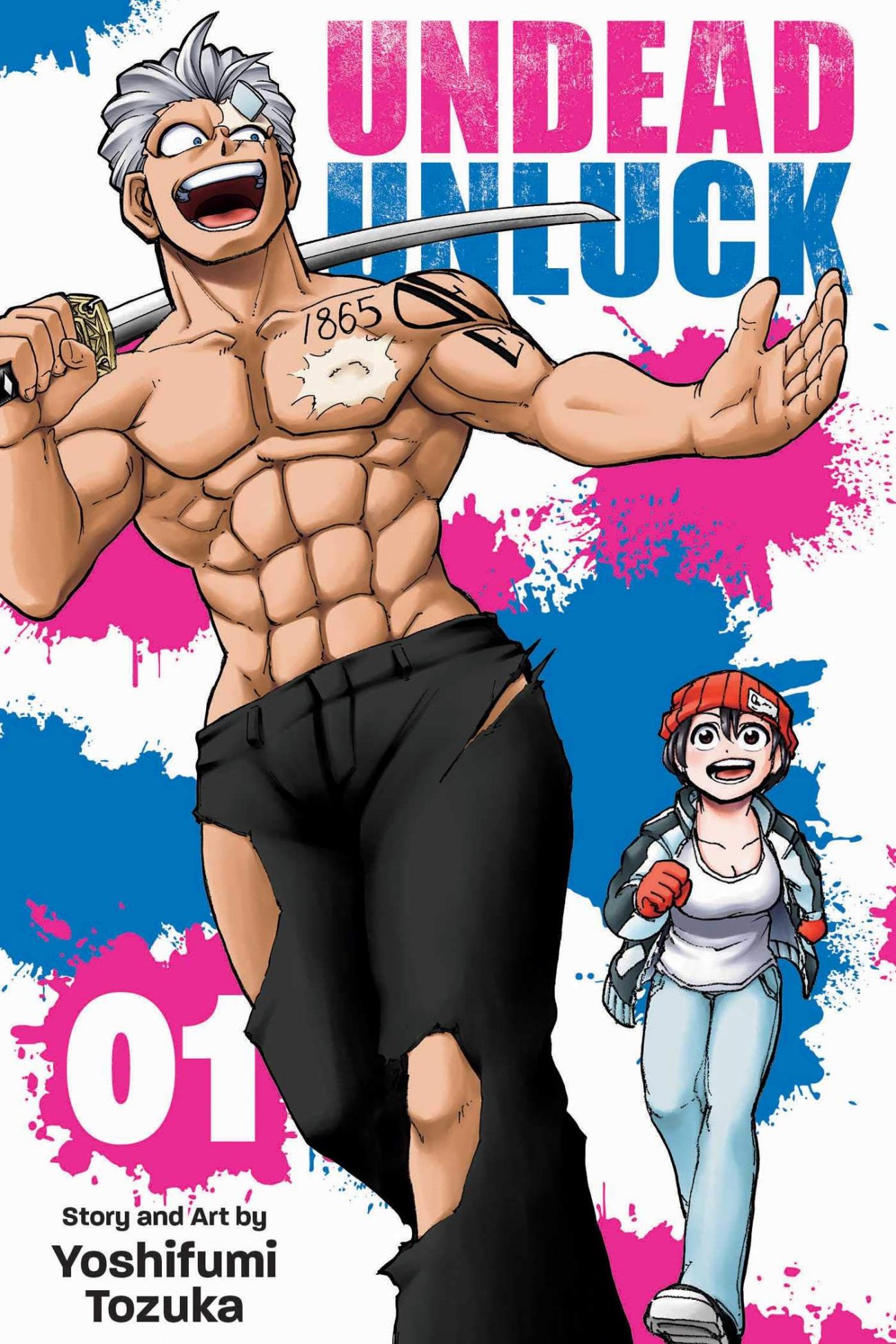 Back in 2012, Sniper Elite developers Rebellion created a video game called NeverDead. It wasn’t the best game around, but it had an interesting concept involving an immortal protagonist who could slice his body into tiny pieces and be put back together. This video game came to mind as soon as I started reading Undead Unluck, the debut series from writer/artist Yoshifumi Tozuka. Unlike NeverDead though, this manga certainly has a lot more going for it!

The story begins with a girl named Fuuko Izumo on the verge of ending her life. She claims that any person that touches her may contract a disease and die. Said claim gets the attention of a mysterious muscleman, who takes the bet and promptly gets hit by a train. Normally this should be the end of this character’s story, but his detached and still-speaking head rolls on over towards the frightened Fuuko. Thus, the truth comes out about the two: he can’t die, and she causes bad luck. 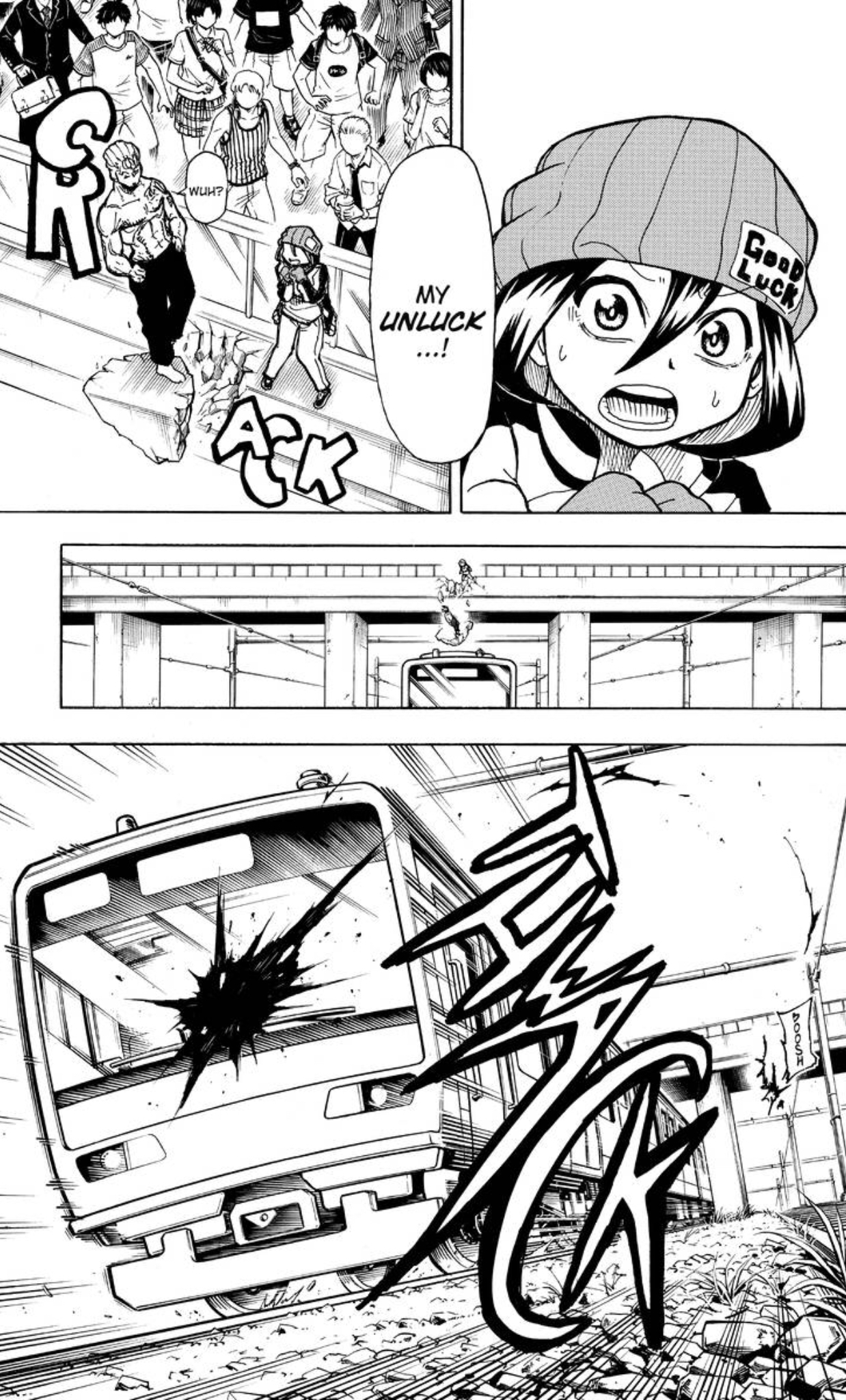 This pairing is soon put together, as the muscleman (who’ll go by Andy later on) seeks Fuuko’s power of bad luck to end his incredibly long life. That’s when a strange organization known as Union arrives, and attempts to put an end to Andy and Fuuko’s free lives. However, upon hearing some tidbits about the group’s exclusive Negator’s club, Andy and Fuuko make it their mission to join their ranks. Otherwise, they’ll either be captured or — in Fuuko’s case — eliminated.

Undead Unluck is filled with a lot of great elements that make for a memorable shonen series. For starters, its action is truly imaginative, as we see Andy lopping off his own body parts to use as weapons. It never reaches grotesque levels of detail, which makes it a series that even the weakest of stomachs can handle, but it never strays from pushing the envelope when it comes to bringing some entertaining violence. (We’re also grateful that Tozuka constantly blurs out Andy’s yarbles when he goes pants-less, which happens very often in this volume!) 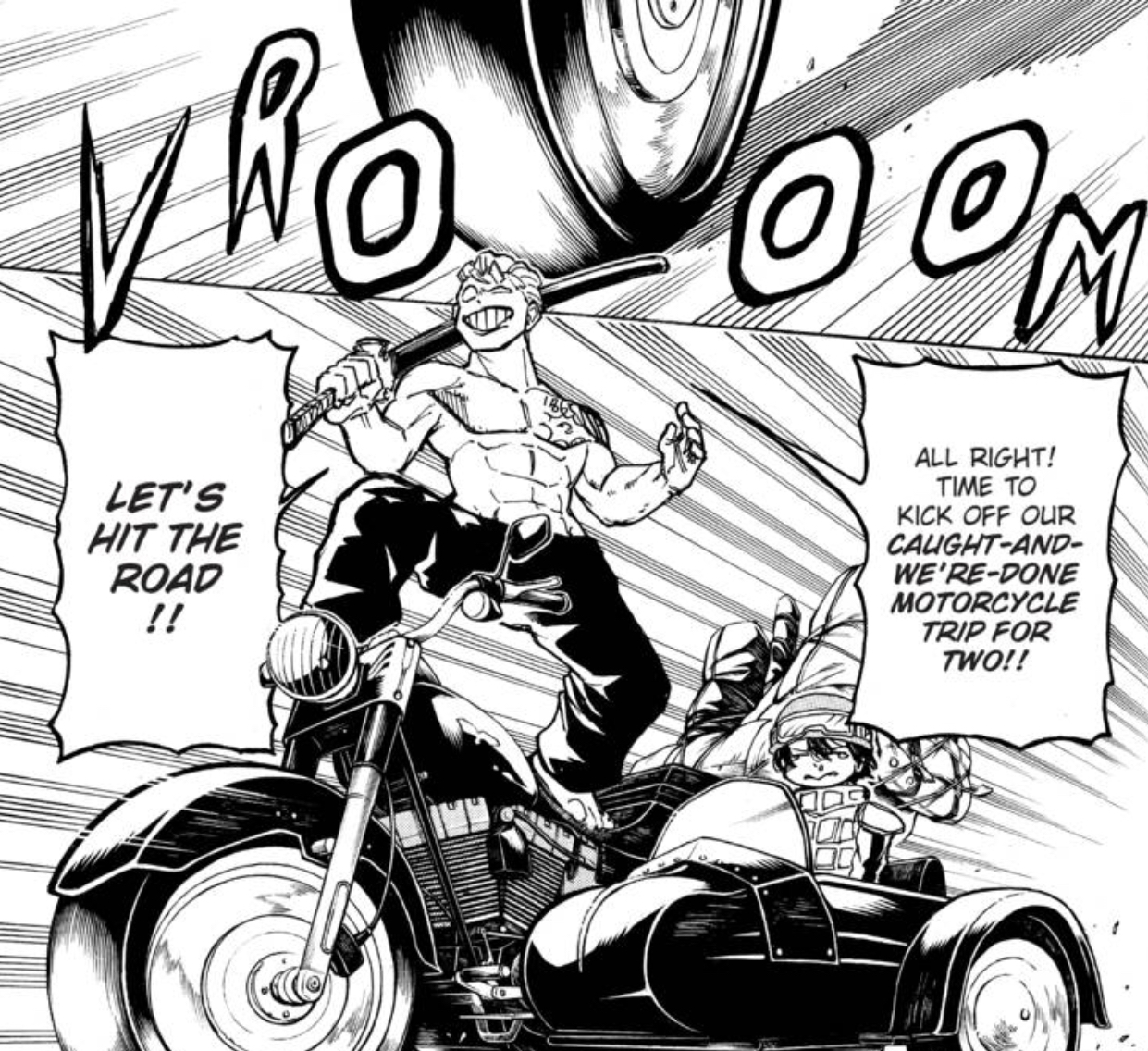 A strong camaraderie between Fuuko and Andy is also a key element to what makes this premiere volume a fun read. You get that Andy will do anything to seek permanent death, and Fuuko’s reaction to his antics are both grounded and wacky-as-hell! Despite the grim goal that Andy has, their adventure towards finding a way into the Union’s Negator team delivers plenty of laughs and smiles, even if it means Fuuko has to use her body to bring bad luck to those who try to harm the two of them. Yes, some of the lewdness can turn some readers off (especially Andy’s proposal to have sex with Fuuko in order to bring the ultimate death), but there are more grin-inducing moments here than cringe-y ones.

Tozuka’s art style is also very appealing in Undead Unluck. When the area around Andy and Fuuko isn’t getting destroyed, the shots of Japan, Russia, and even the oceanside are a beaut to behold! As for character designs, they do come off somewhat like rejected My Hero Academia characters, but I mean that in the most positive of ways. Rather, these two seem like they’d fit right in with the ranks of the Vigilantes instead of UA Academy, what with the mayhem the two of them create for the sake of staying alive. 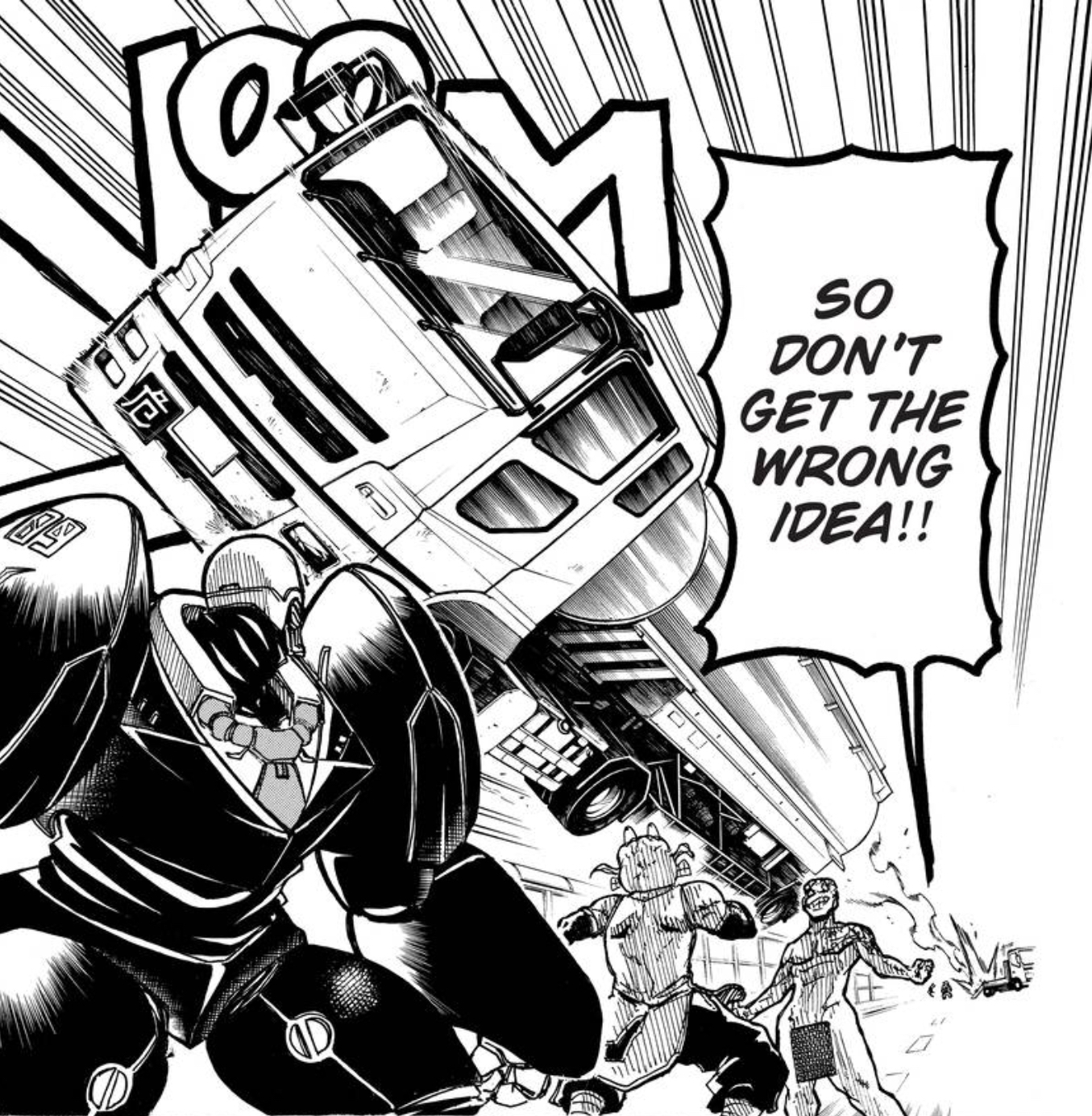 Lastly, there’s the writing. Much like Chainsaw Man, this manga attempts to go all in for the humor and action that’s on display. It’s easy to like both Andy and Fuuko, but one thing that’ll keep the readers from getting attached to them is — sadly — the lack of heart on display. You get that Andy cares for Fuuko and vice versa, but there’s currently nothing deep that cuts into these two’s mindsets. Fortunately, the lack of feelings here is made up with its attention to comedy and wanton violence!

Volume One of Undead Unluck is filled with a lot of great potential. It combines amazing action with some nearly top-tier comedy, making for a fun and exciting read for shonen lovers everywhere. However, we’ve yet to see the more emotional aspects of this narrative, which may make it hard to feel something for these characters. Perhaps we’ll get someone to bare their soul in Volume Two, as Undead Unluck’s premiere volume was far too busy baring Andy’s bum to deliver some sort of emotion. 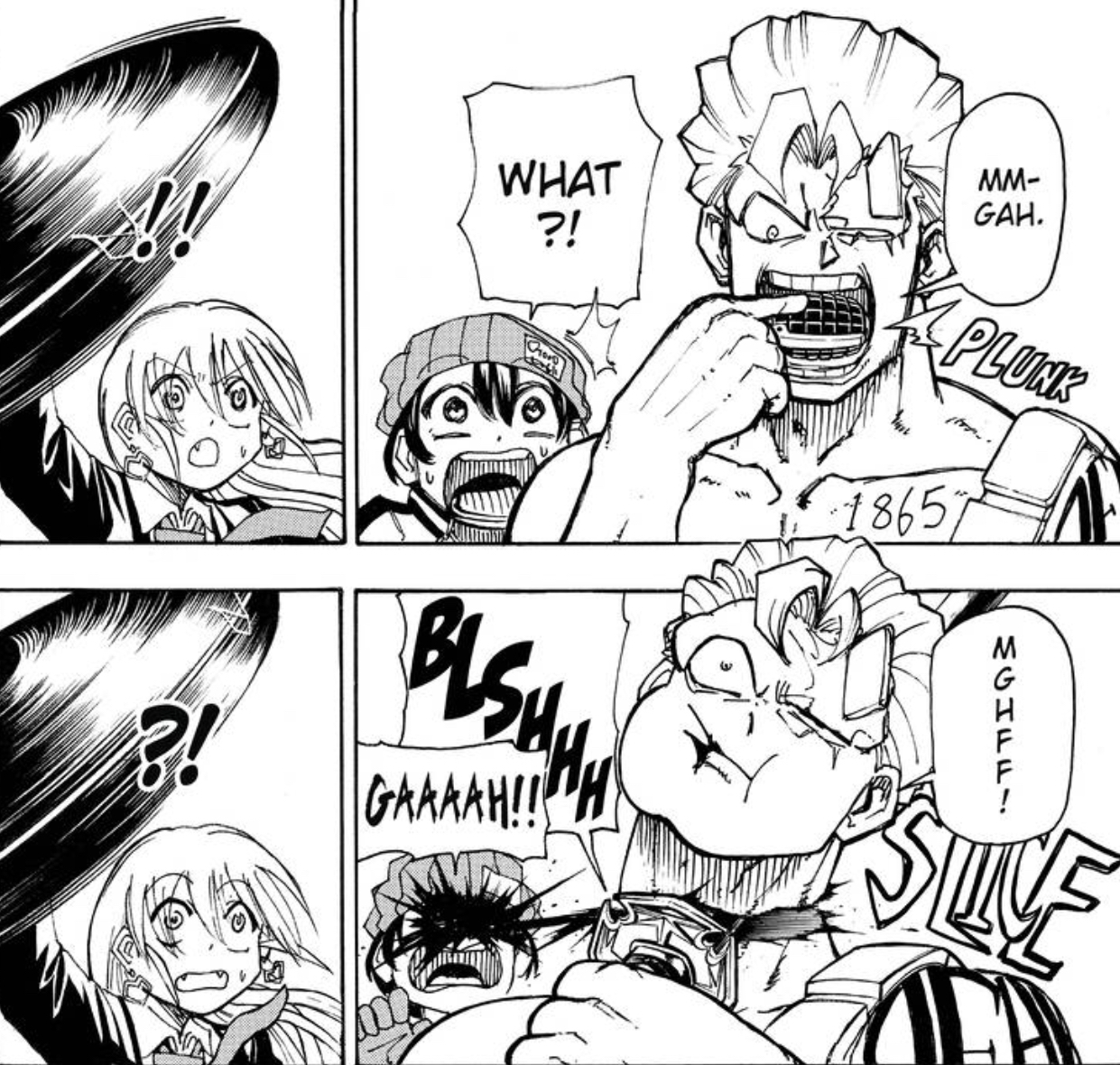