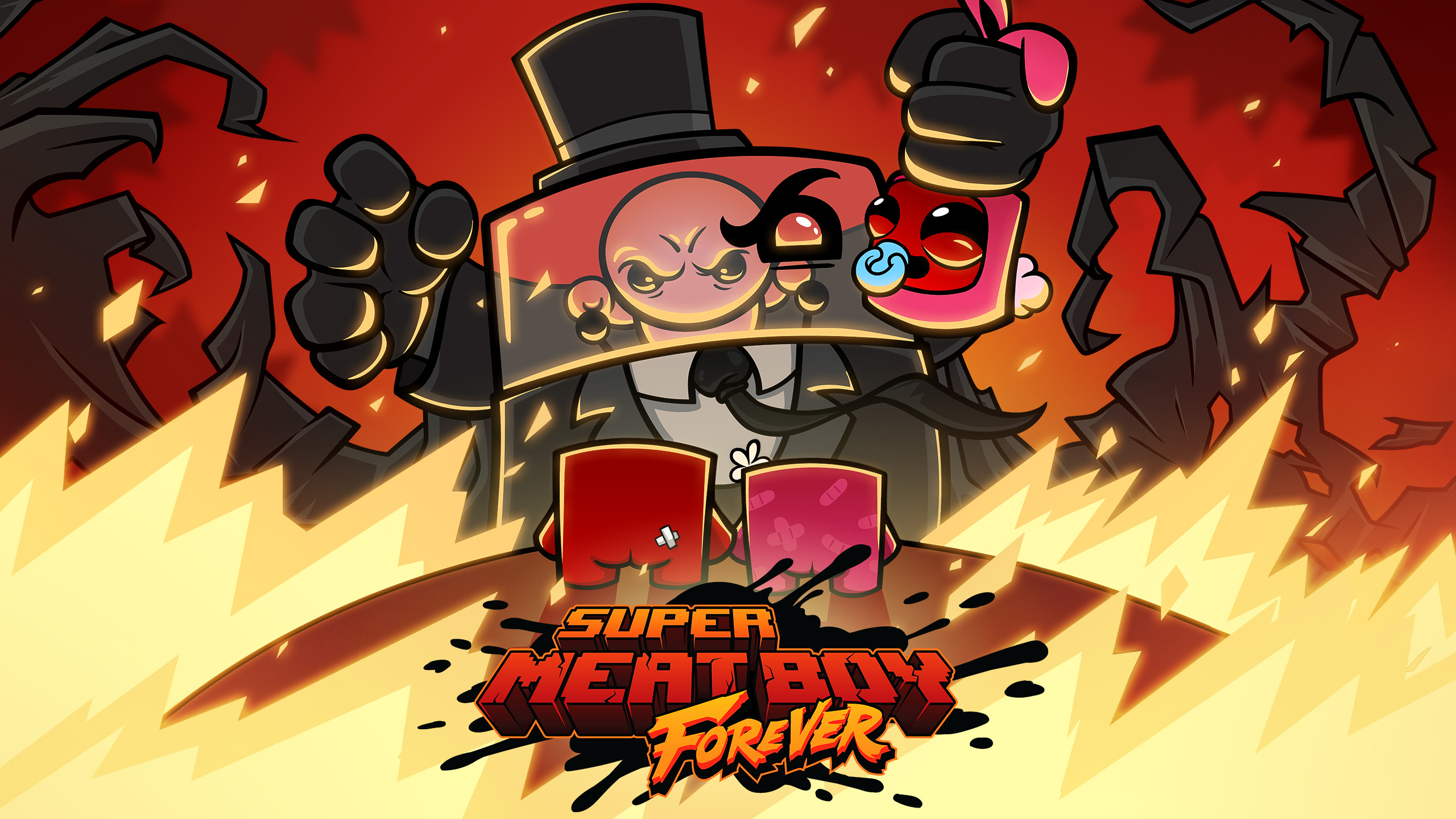 In 2010, Team Meat took the Xbox Live Arcade by storm with Super Meat Boy. The platformer had you jumping tall heights, evading traps, and taking on tough areas that would make the average gamer rage-quit after succumbing for the umpteenth time. Audiences loved the beef hero, to the point where he graced t-shirts, plushies, toys, card games, and even other video games in cameo form. And yet, despite the popularity, Meat Boy was absent for the rest of the 2010s from any leading role titles.

Ten years later, Team Meat finally delivers on a sequel: Super Meat Boy Forever. It’s more of what made the first Super Meat Boy a classic, with some tinkering here and there. Do these new additions help continue Meat Boy’s legacy, or do they cause him as much harm as a room of sentient buzzsaws? 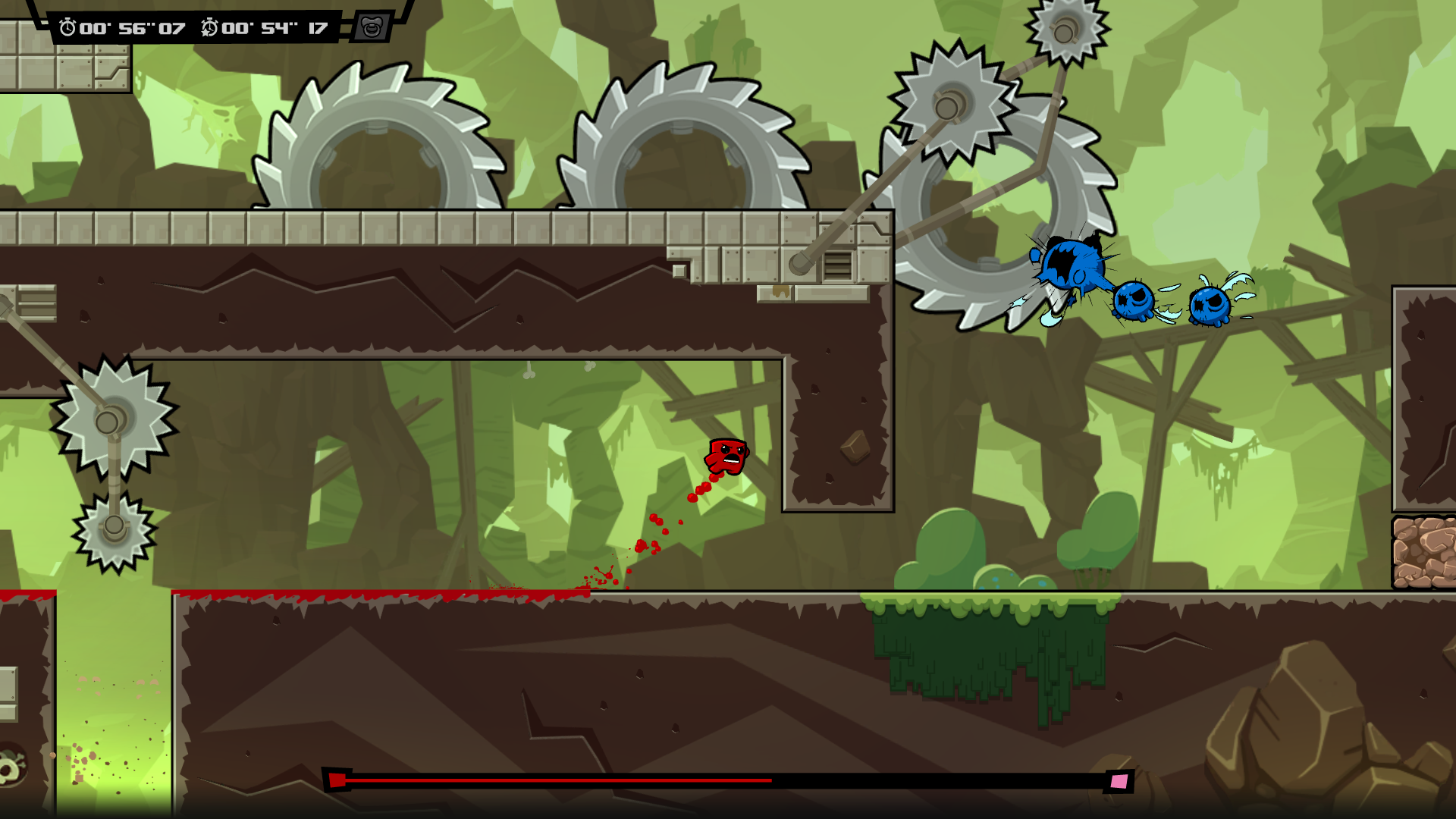 The story of Super Meat Boy Forever focuses on Meat Boy and Bandage Girl, whose daughter Nugget is kidnapped by Dr. Fetus. Traversing through four worlds (each with a light and dark version), the couple must run amuck in dangerous territory. From lasers and robots to pits of stabby things, almost every corner of their path is riddled with danger. Fortunately, with enough of a quick trigger finger, getting back your kid will be easy as...well, okay, it’s not easy in the slightest.

Timing is everything in this game, as it was in the previous Super Meat Boy. Being off by a fraction of a second will result in a splatter-filled death. You could find your flow as you jump, slide, and punch your way through a level. But in the blink of an eye, your rhythm could become off-kilter, resulting in Meat Boy or Bandage Girl becoming a serving of Hamburger Helper. (Thank heavens for those checkpoints!) 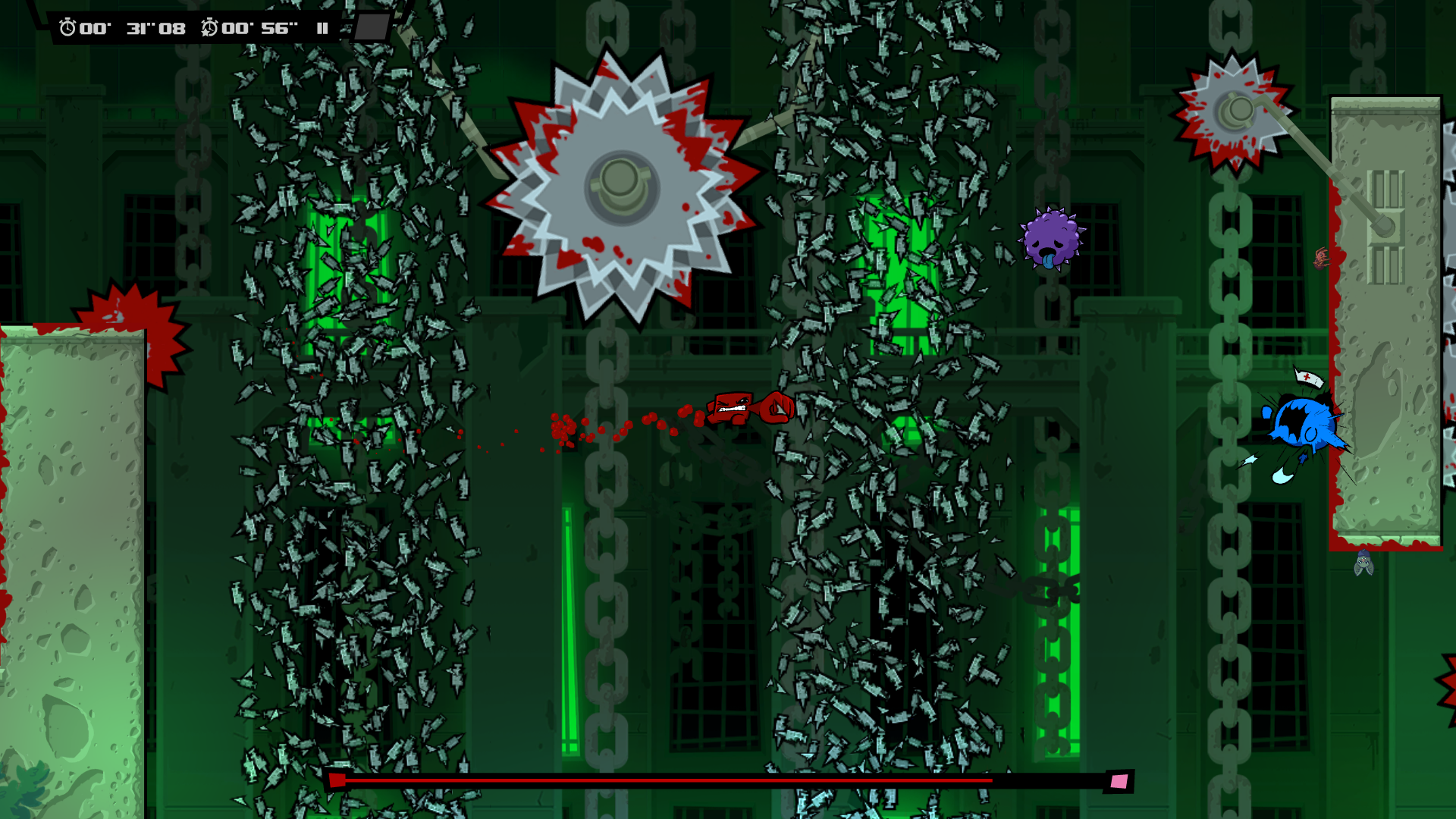 There is no penalty if you die constantly, as Super Meat Boy Forever doesn’t want to punish its players too much. In fact, there is some fun to be had with the plethora of times you eat it during a level. When completing an area, players will be treated with an uncut demonstration of your victory, with almost all of your dead sprites popping up to see where and when you went wrong initially. It’s a funny little extra that helps soften the blows that Team Meat lands on every gamer.

Like Dr. Fetus, this game revels in flipping off all of those who seek to topple it down. Getting through even the earliest levels can be difficult, with each level throwing almost everything at your character. The trick of the game is to feel out the area for the right pathway to victory, which — again — is easier said than done. Even if you figure out how to get to the next checkpoint, executing the winning combos can result in one’s own execution via traps or bots. 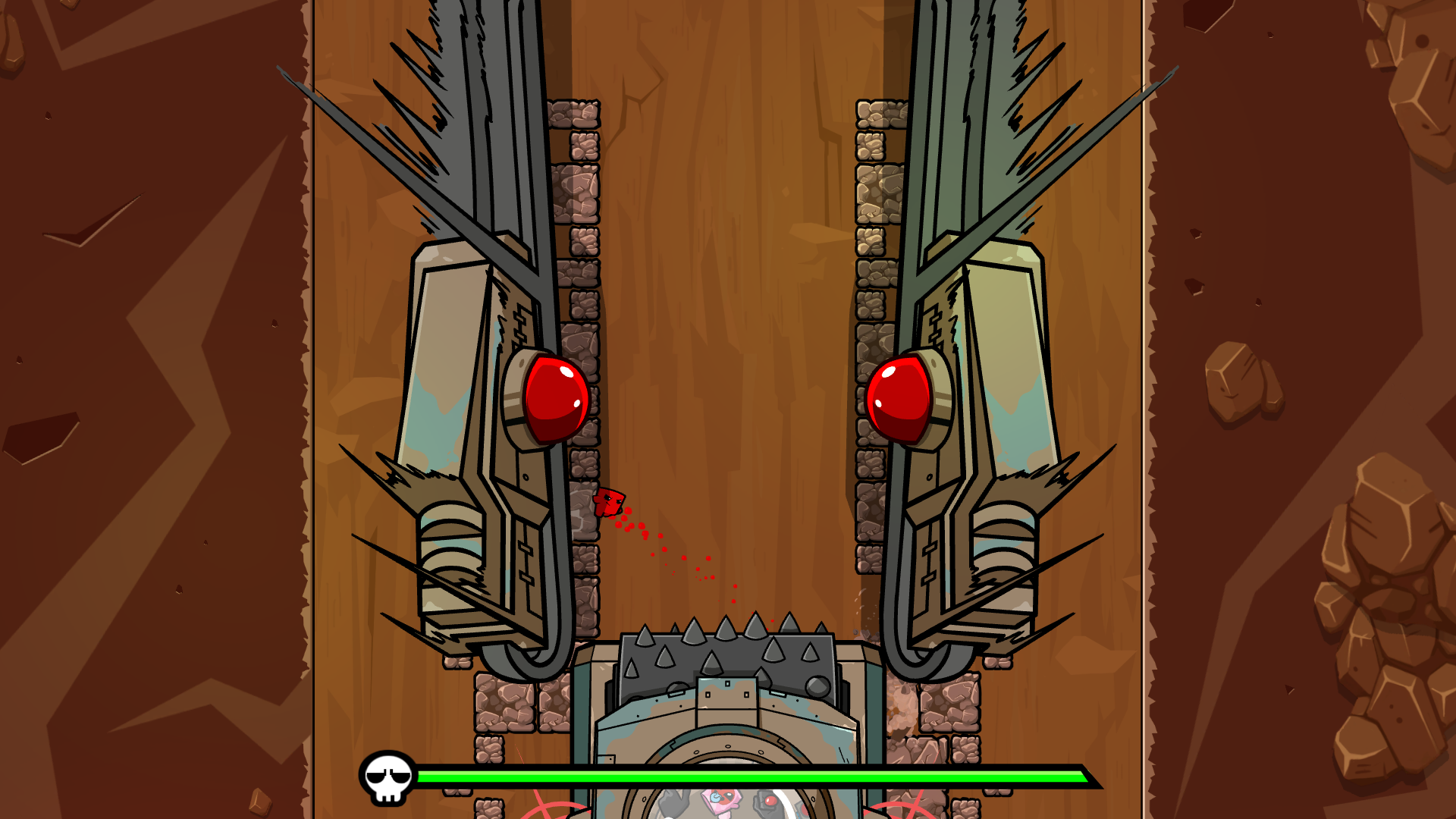 It’s in the boss battles where Super Meat Boy Forever let your skills work to their fullest. Despite its closed-off area, there will be more leaps and jabs made in these parts than any of the regular levels. Again, it’s all about figuring out a strategy, especially when it comes to finding the bosses’ weaknesses. Once the secret to defeating each one is figured out...erm, yeah, it’ll still be wicked tough to beat them.

Super Meat Boy has reveled in being an unforgiving game, despite its cute characters. Forever is no different, pushing players to the point of rage-quitting after another death is dealt in their direction. Sometimes, it’s the timing; other times, it’s because your character didn’t jump/punch because — for some reason — the game didn’t read that a button was pressed. It’s brutal with its approach, giving way to being one of the toughest games from 2020 to play. 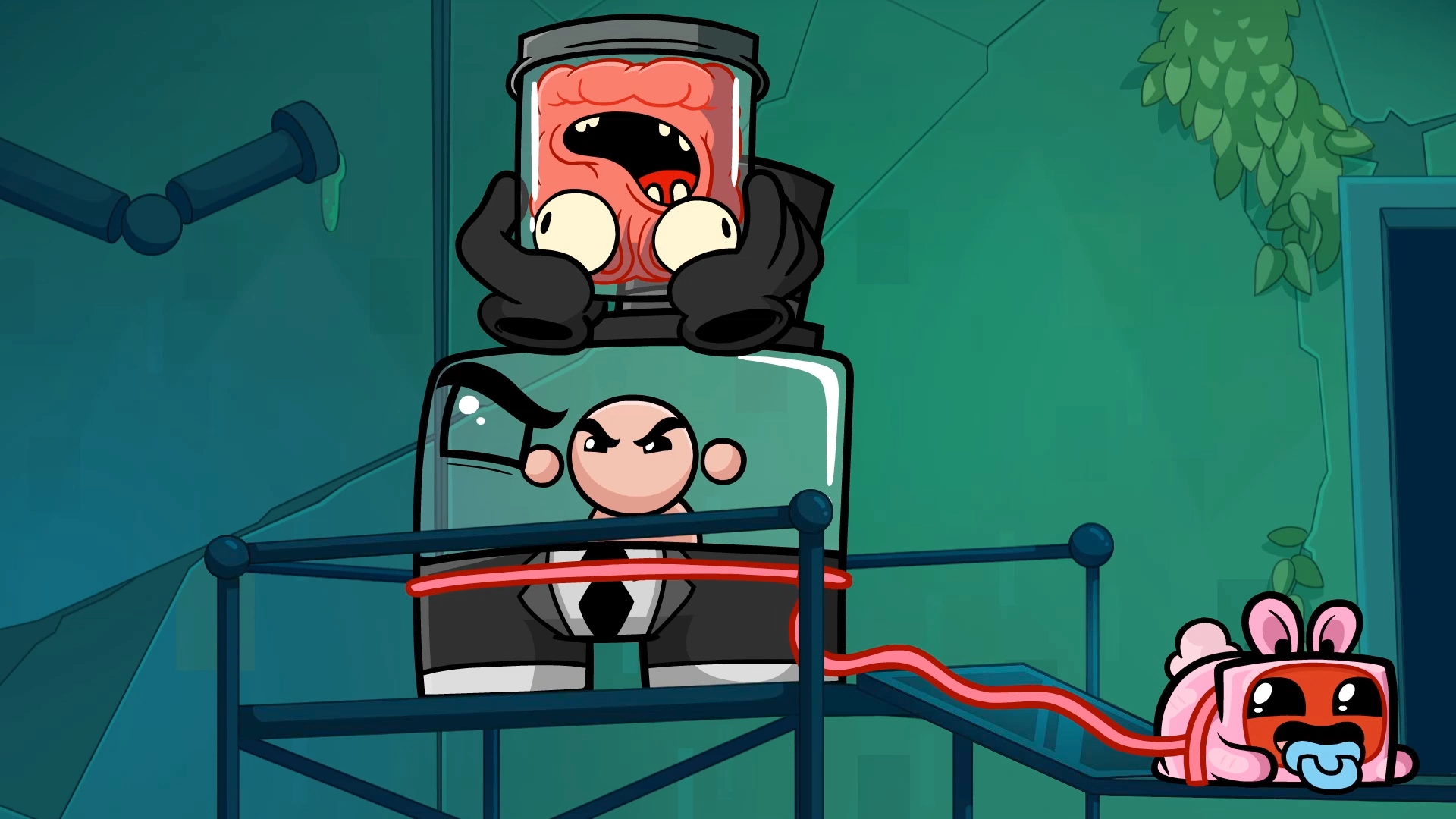 And yet, there’s a certain charm to Super Meat Boy Forever that makes it hard to put down. The wanton violence and silly tone keep you from chucking your controller across the room due to its difficulty. Its story is told through some well-animated FMVs, brimming with dark humor and some impressive action. (It makes me wish that a Super Meat Boy cartoon would be greenlit.)

Super Meat Boy Forever is a lot more of what the original a fun-yet-frustrating adventure. Its difficulty might turn some people off, but its personality will easily pull in the rest of those who’ve been waiting for a new beef-filled platformer. While it doesn’t reinvent itself, Super Meat Boy Forever adds enough polish to keep its gameplay feeling fresh all throughout its run. (Then again, after waiting ten years since the first game, anything Super Meat Boy-related is a good thing!)

Promotional consideration provided by Vincent Abel of Plan of Attack. Reviewed on the Nintendo Switch.