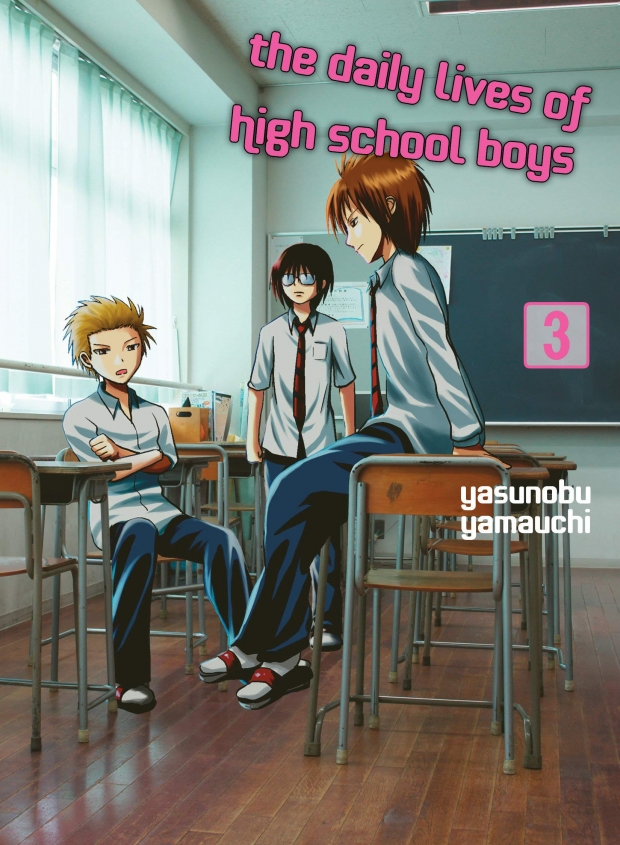 Universal comedy can be a tough thing to master. A good gag that gets as big a laugh in Japan as it does in America can be few and far in-between. In some cases, one must be familiar with a country’s culture to get one’s style of humor. This is how I felt with the third volume of the daily lives of school boys, where a lot more jokes miss their Western mark than hit.

The main trio of the manga dive deep into playing pretend, with an imaginary game of Not Dragon Quest going off the rails. Back stories about Mitsuo result in some crossed timelines, whereas Tadakuni’s sister deals with a date turndown that went slightly wrong. Ringo deals with height problems, and Hidenori struggles to tell a convenience store clerk that he did something wrong. Meanwhile, the art of manga and sports meets a harsh reality.

Reading through this volume of the daily lives of high school boys can feel like a chore at times. Flipping through the pages of this trio of friends can often result in punchlines that not only miss their mark, but somehow fly past their target by a mile. The whole bit surrounding Tadakuni’s sister turning down a student’s date not only isn’t funny, but strangely uncomfortable when you hear what the boy did after the rejection. A discussion with Motoharu and his older sister lacks any sort of humor, with me rereading that chapter a few times over to see where the gag was.

But when a joke does work, it works wonderfully! The career planning chapter is the best example, with their teacher rightfully flipping out with every dumb answer to the students’ desired careers. A quest to get a bag out of a tree brings forth just about every visual punchline you could imagine, while an argument over the unrealistic reactions in manga results in a good manga-like punchline. From a sight gag perspective, the best involves Hidenori attempting to stay cool while the unnamed Literature Girl pulls off one clumsy move after another.

Volume Three of the daily lives of high school boys is very much a mixed bag. There are some funny things in here, but there are also some jokes that don’t work in the slightest. While there are moments of laughter to be found, one is forced to tread through the unfunny stuff to get to it. Ergo, by the time the comedy actually works, you may feel too tired from the missteps to laugh.