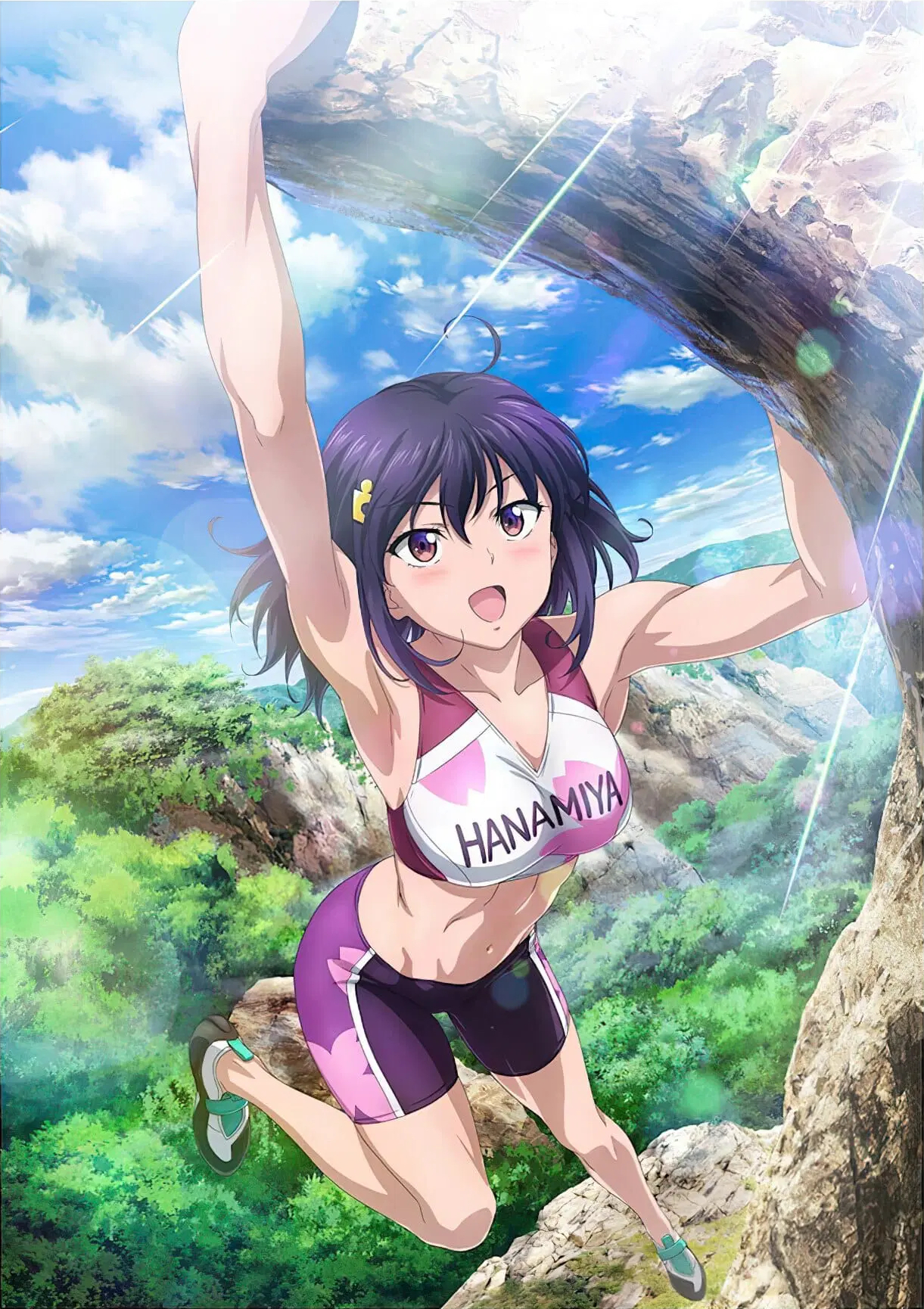 While I wouldn’t call myself an expert by any means, I do enjoy a good rock climb here and there. The feeling of grabbing hold and pulling myself up towards a goal is the sort of adrenaline that only this sport can offer. Not only is it a great form of exercise for your body, but the way one needs to find their way up safely is also a good workout for the brain. Perhaps this is why Iwakakeru -Sport Climbing Girls- has grabbed hold of me, even if it’s not exactly a perfect anime.

Based on the manga by Ryūdai Ishizaki, Iwakakeru -Sport Climbing Girls- follows puzzle game master Konomi Kasahara (Sumire Uesaka), whose lost her passion for video games. After stumbling into her school’s Climbing Club, she finds a new way to use her puzzle-solving skills via the sport. With the aid of her fellow club members Jun (Yui Ishikawa), Sayo (Aina Suzuki), and Nonoka (Miyu Tomita), Konomi sets out to conquer every wall that stands in her way. Of course, as she quickly learns, the sport is not an easy hill to climb. 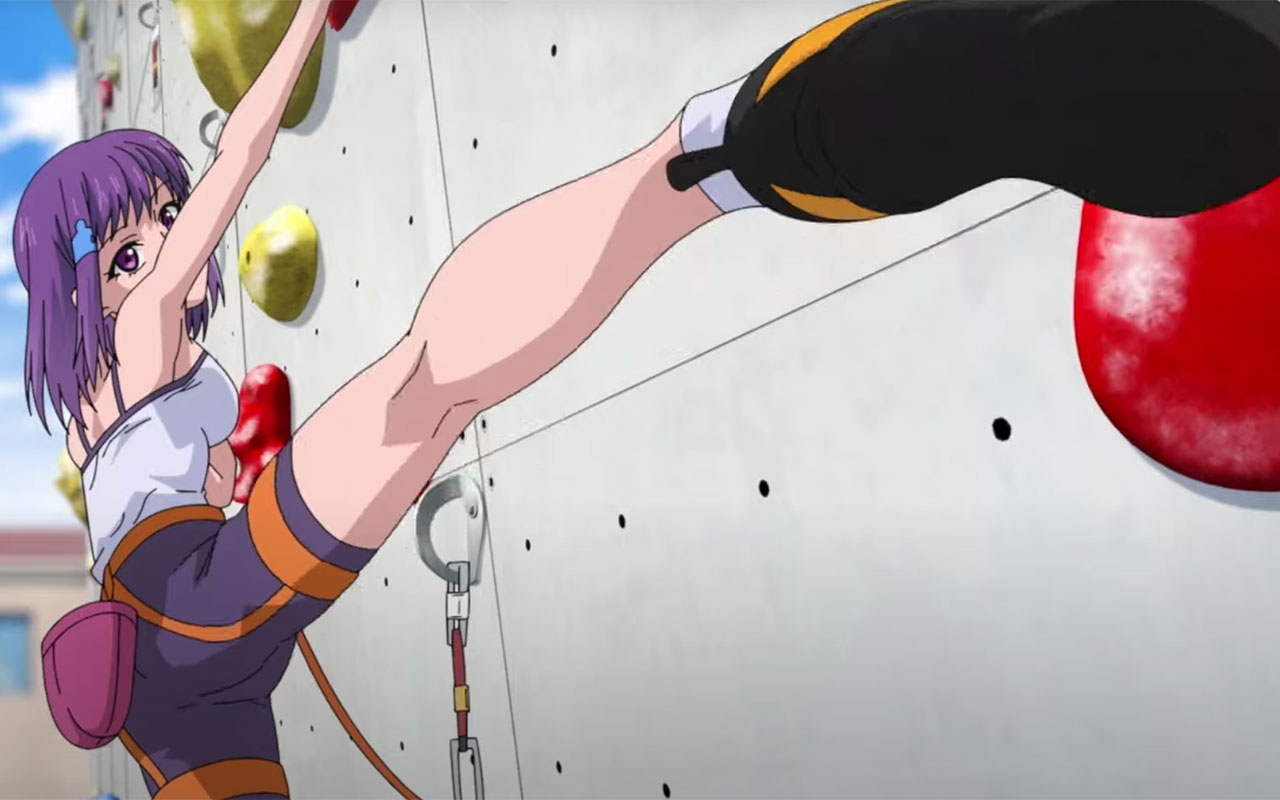 One of the things that stands out about this series is the knowledge of the sport of rock climbing. Through the actions of the Climbing Club and their rivals, viewers will learn every nook and cranny about the sport, ranging from styles of climbing to even specific holds. Original author Ishizaki clearly knows the art of this sport, with even the mental aspect of what goes into conquering a route on full display with great detail. Like Haikyū!! or Eyeshield 21, the learning elements of the sport give you not just a better understanding of what’s going on, but also demonstrates just how much hard work and dedication goes into performing even the simplest of maneuvers.

With that being said, it’s a shame that Iwakakeru’s overall story is somewhat generic. A tale of a newcomer overcoming the odds in a sport is something we’ve seen done over and over again in both the manga and anime realm. Because of this, the plot can normally be constructed as unrealistic, especially when said newcomer learns the tricks of the trade far too quickly. However, there’s an element to the character of Konomi that makes her rise feel a lot more understandable, and that’s her gaming brain. 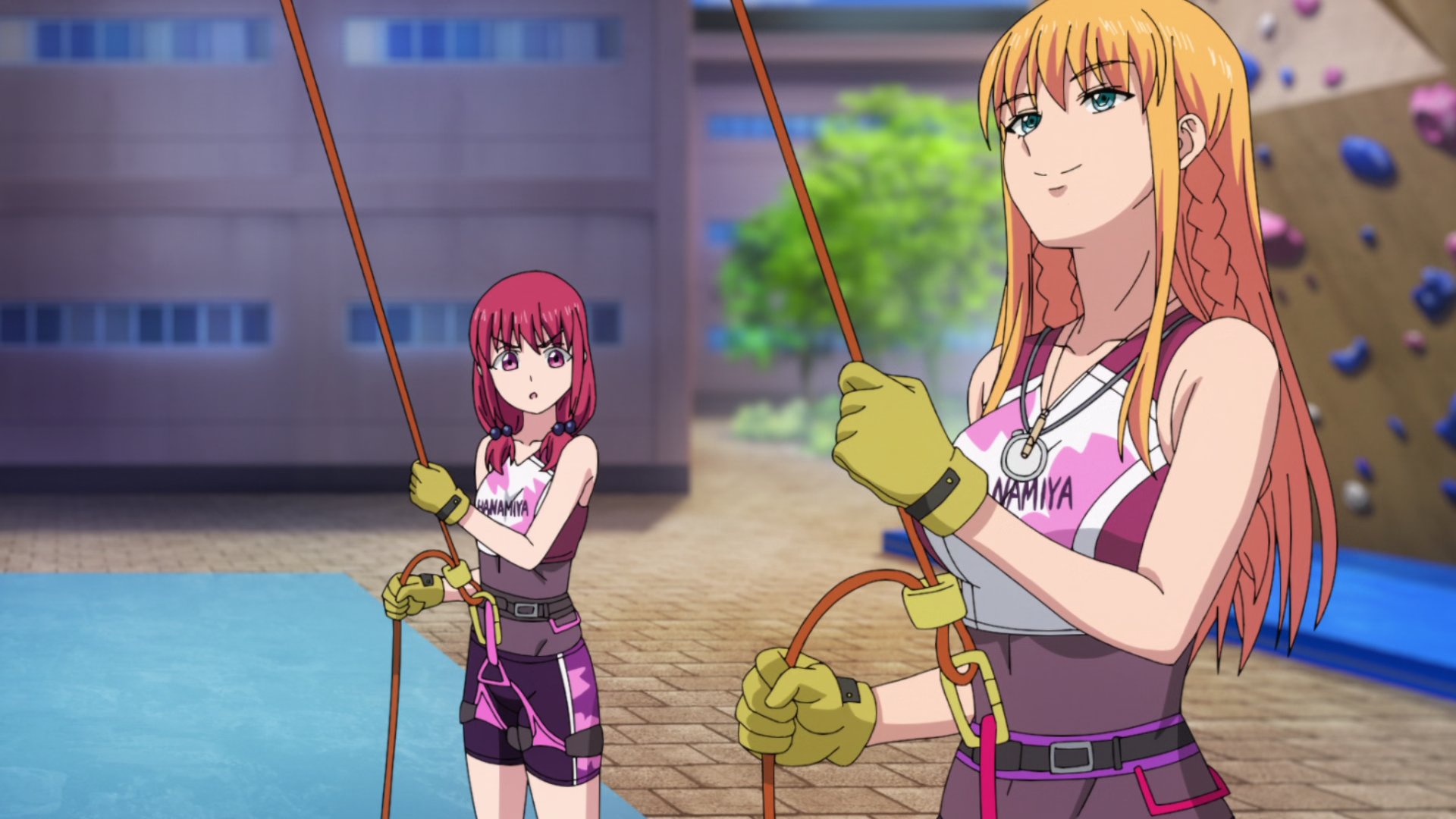 The way the show dives into Konomi’s brain as she solves each wall climb is something that I find myself doing even when it comes to certain chores or errands. How she connects pathways using a sort of Puyo Puyo-inspired logic is something that a lot of people do in order to solve tough conundrums. It makes her achievements feel a little more genuine, even if her quick rise in strength and ability is slightly too quick. While I would probably give more credit to her teammates for helping her, there lies yet another issue with Iwakakeru: the forgettable costars.

For the life of me, I couldn’t tell you who her other teammates are simply by showing me a picture of them. Although they do offer assistance here and there, the three other girls on Konomi’s team are so subpar that you could’ve easily rolled them into one singular character. Even when a character like Jun has her kerfuffles and nearly walks away from the sport forever, her story and growth are quickly forgotten once she returns to the fold. Rival characters also have their quirks, but aside from a catchphrase or a means of talking feline-y, they don’t really stand out either. 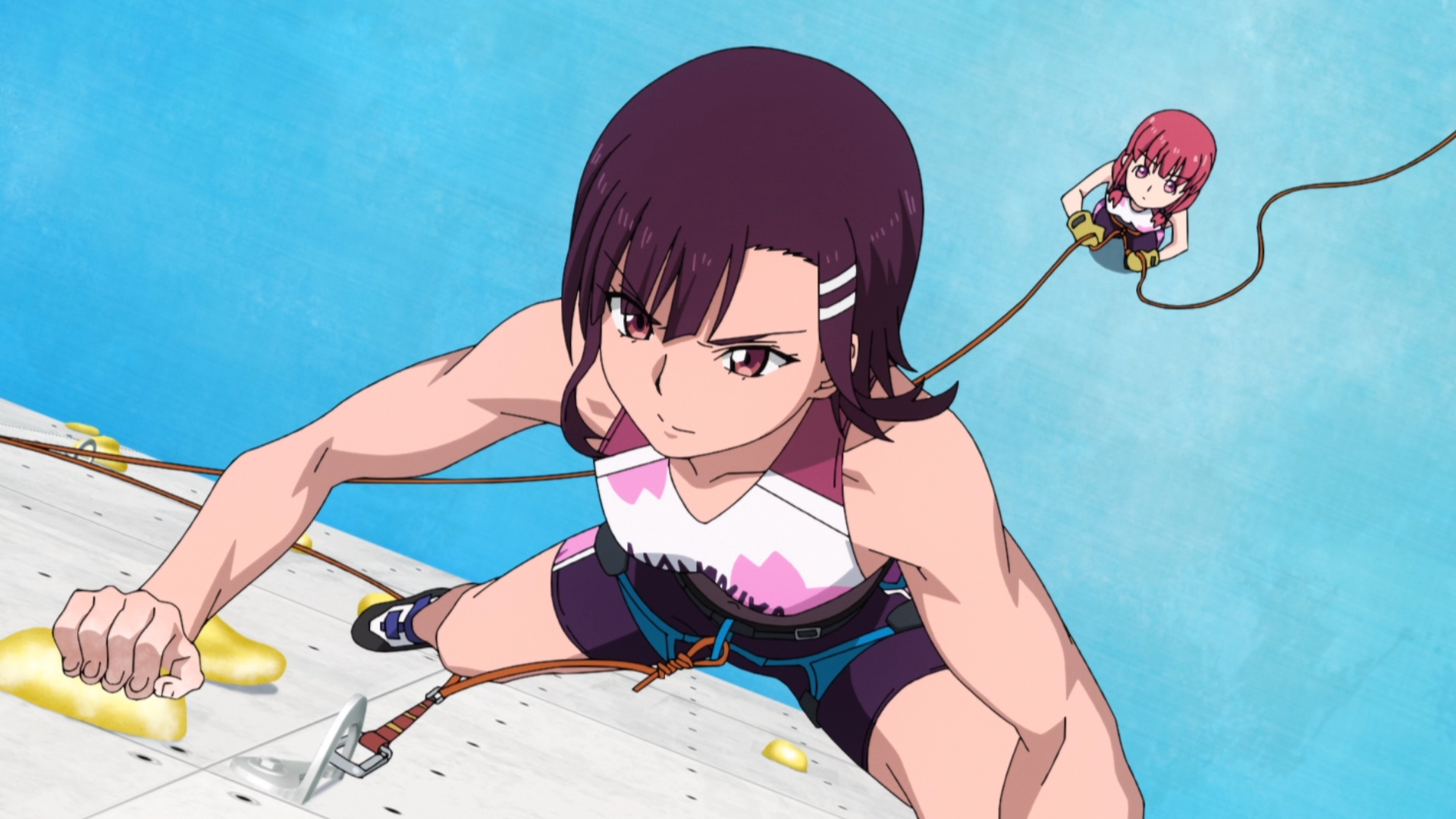 Thankfully, it’s when the sport itself is pushed into focus where Iwakakeru can shine like it wants to. Animated by Blade (with assistance from Wit Studio and Studio Massket), the competitive parts of the show demonstrate the tough physical and mental elements of rock climbing. The way people have to bend their bodies or make a split-second decision are showcased with great detail and focus. Although the series looks merely decent when the action isn’t happening, there’s plenty of care placed into how the art of rock climbing is presented.

Uesaka is convincing in her performance as Konomi, showcasing her range both from an excitable and a deep mental perspective. Both the victories and failures that she obtains result in some believable reactions that make her rise and fall in the ranks relatable. As she is the focus of Iwakakeru, Uesaka places plenty of heart, soul, and even sweat into her performance. While Ishikawa, Suzuki, and Tomita do a good job as Jun, Sayo, and Nonoka respectively, their characters are too cookie cutter to stand out from the MC. 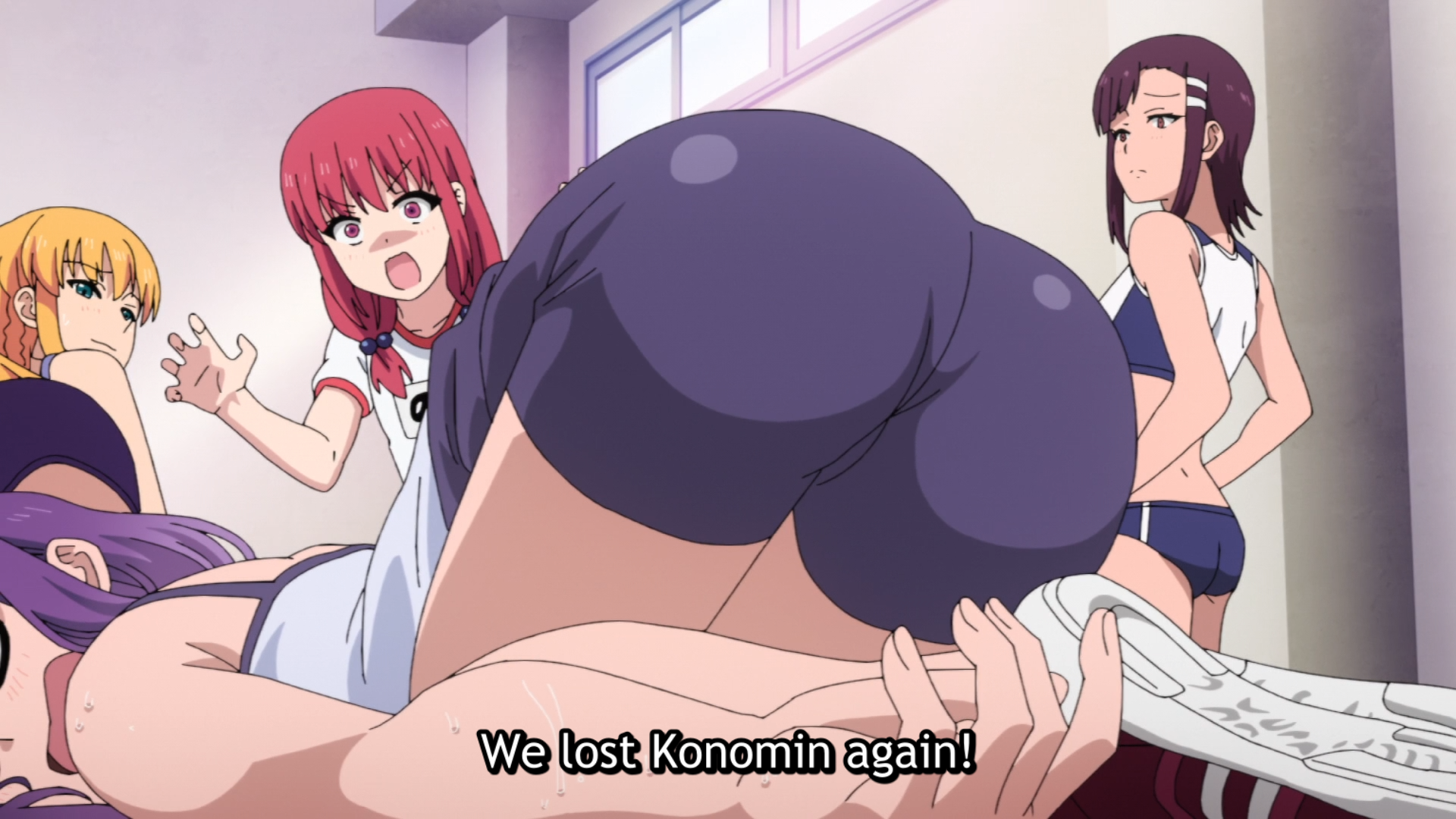 Composer Tsubasa Ito brings together a score that’s slightly touch-and-go. On one hand, more than half of the soundtrack can be forgettable, as they tend to stay within the confines of general sports tracks. However, when the genre dives more into synthwave or Nujabes-inspired lo-fi hip-hop, that’s when the melodies truly stand out. Opening theme “Motto Takaku” by Suzuki and closer “LET'S CLIMB↑” by the main voice cast are okay at best, but they will easily be forgotten within the seas of more memorable anisongs.

Iwakakeru -Sport Climbing Girls- isn’t exactly a great anime, but it’s better than okay. When the show focuses on the sport itself, that’s when it becomes a series you can’t peel yourself away from. However, the generic story and characters make it somewhat of a hard sell, so if you’ve never had an inkling of interest in rock climbing, then Iwakakeru might not be the series for you.

Iwakakeru -Sport Climbing Girls- can be viewed on Crunchyroll and VRV. Episodes 1-10 were observed for this review. Promotional consideration provided by Ellation.