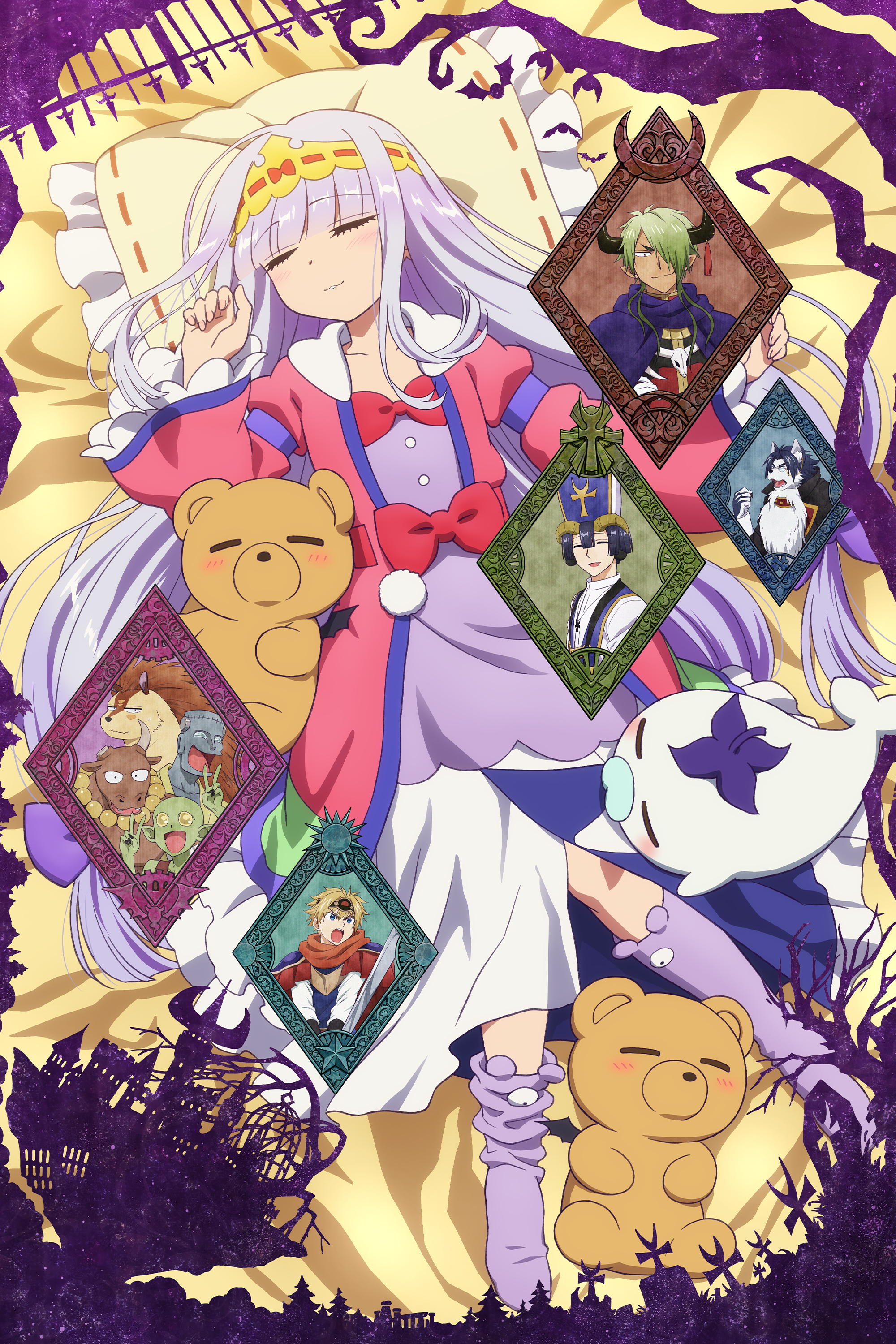 Getting a good night’s rest is a lot easier said than done. Sometimes your bed can be uncomfortable, to the point where you spend hours trying to find that sweet spot in the mattress that’ll let you pass out. Other times, it can something mental like stress or anxiety, where a good cure can lie within a glass of warm milk or a bottle of melatonin. In some cases, it can be a plethora of things that deal with one’s bed, mental well-being, and even location. Such is the case of Princess Aurora Syalis Goodereste (Inori Minase), the adorable-yet-sleep-deprived protagonist of Sleepy Princess in the Demon Castle!

Based on the manga by Kagiji Kumanomata, Sleepy Princess in the Demon Castle takes place near the kingdom of Goodreste. Demon King Tasogare (Yoshitsugu Matsuoka) has kidnapped Princess Syalis, in order to strike fear into the hearts of its citizens and to lure its hero Akatsuki (Hiro Shimono) into a battle to the death. However, being kidnapped doesn’t seem to faze Princess Syalis, as her main concern is getting some shuteye. With the aid of the Teddy Demons and a plethora of unlikely victims, Princess Syalis attempts to find a perfect place to catch some Z’s. 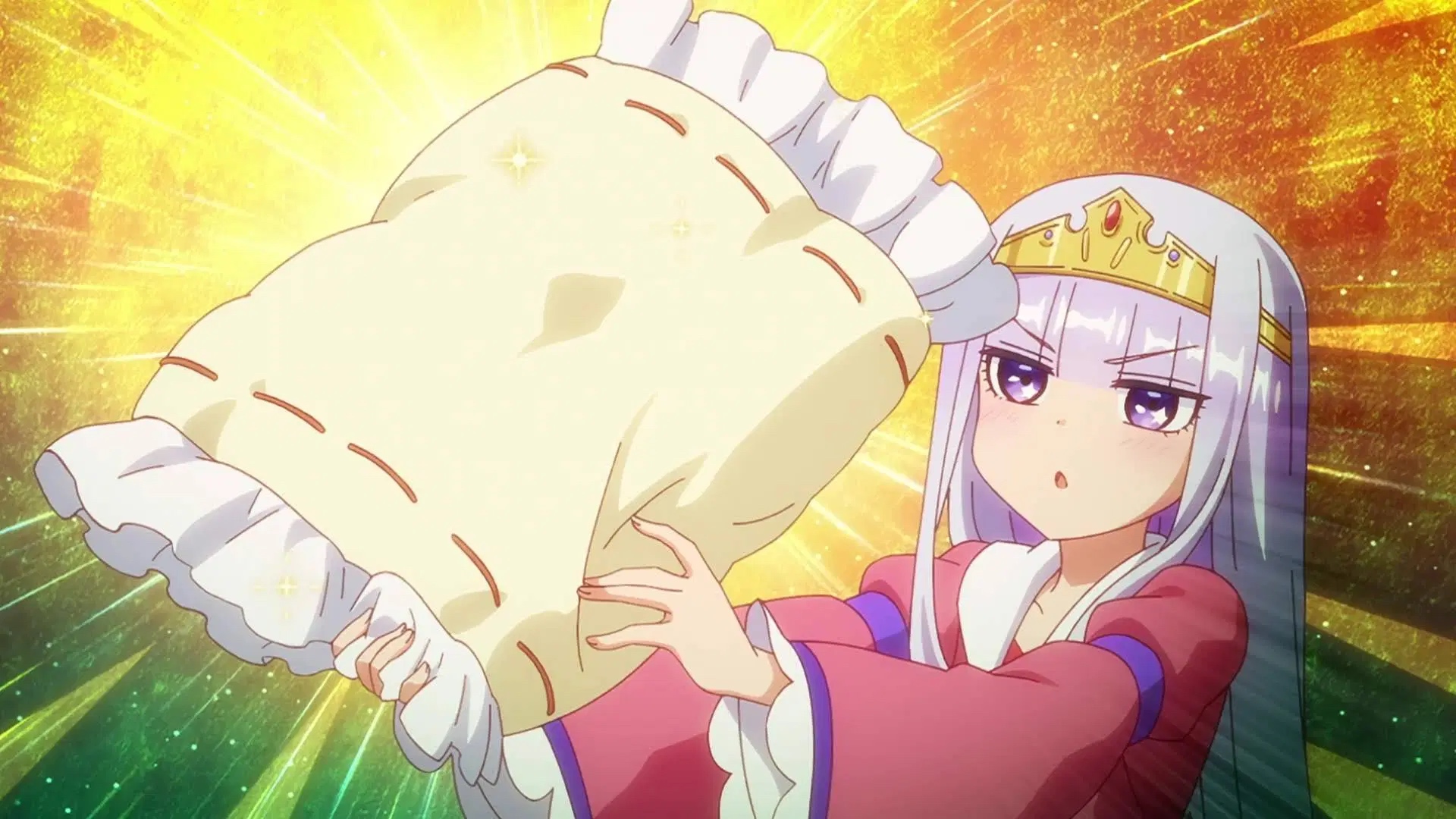 Akatsuki’s quest to save Princess Syalis practically becomes a series afterthought, as it’s apparent that it's of no grave concern to her that she's in captivity. With her wits and determination, Syalis tries everything to earn that nap. Whether it’s making a new pillow from Teddy Demon fur or crafting a bed from a coffin that temporarily held her dead corpse, Syalis thinks outside of her cage in order to achieve that perfect night’s sleep. Soon, the monsters that roam the castle realize something even scarier than the Demon King: the princess isn’t trapped inside the castle with them; it’s the other way around!

And that is what makes Sleepy Princess in the Demon Castle a bundle of fuzzy joy to watch each week. This anime merely looks cute, until you get into its center. What lies deep in there is a hilarious slaughter-fest, as demons big and small are wiped out by Princess Syalis and her quest for a nap. Not even death can keep Princess Syalis from achieving a desired snooze, what with the Demon Cleric (Kaito Ishikawa) constantly resurrecting Goodreste’s fair maiden every time she gets poisoned or falls into a pit of fire. 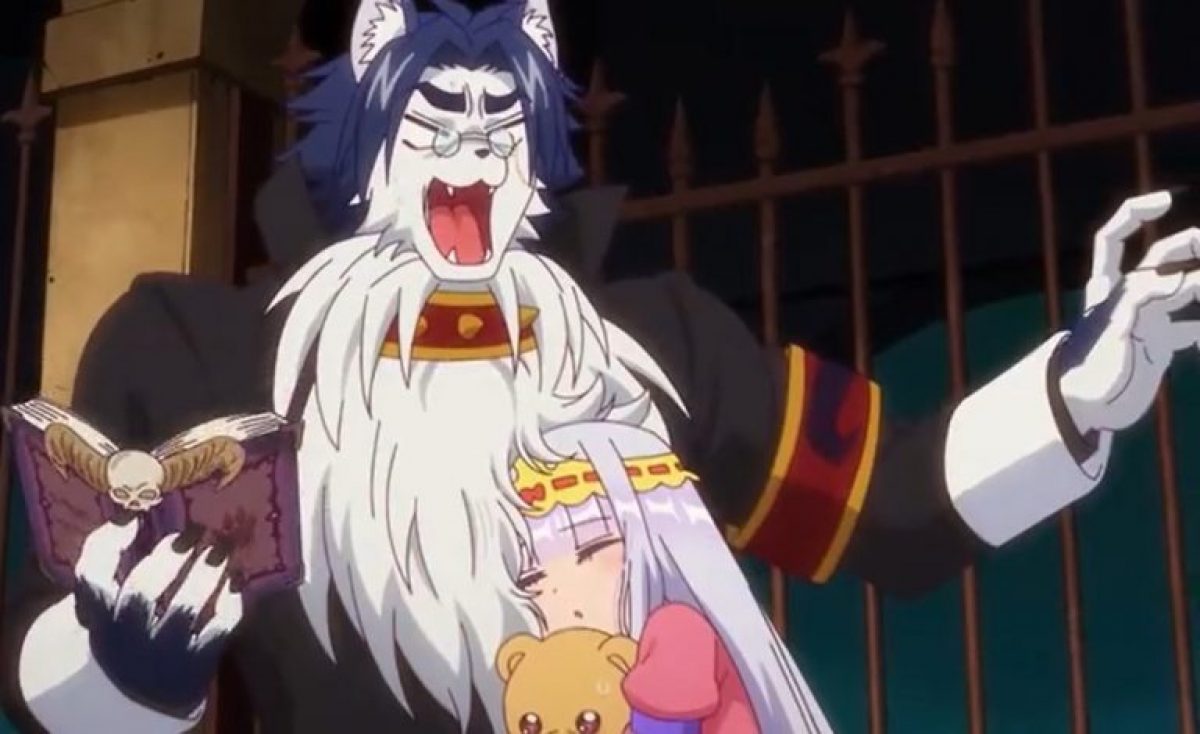 How she completes her quests to Dreamland is the real fun of this anime. Princess Syalis holds nothing back if it means a comfortable rest lies ahead, and many demons find themselves victim to her schemes. A Ghost Wrapping Paper becomes a constant victim of hers, as she cuts him up to make bed sheets and other materials. Getting her room cooled down (because of course it’s hot in a Demon King’s lair!) has her murdering a tire monster, disguising herself as an Ice Golem leader, and — to add more fuel to the fire — kills the actual leader and builds an igloo out of his corpse! This anime is relentless to those residing in the Demon King’s lair, but it’s all the more hilarious because the damsel is the true monster in the castle!

Princess Syalis’s goal of getting a nap is also — quite shockingly — relatable during these current times of ours. When a virus is plaguing the world and there’s civil unrest in our streets, all anyone in 2020 wants these days is to close their eyes and have a comfortable siesta without any worry! While some strive to be like Goku or Midoriya, others (maybe those in the 30-40 year-old demographic) just want to survive the daily struggle and make it into bed in one piece. In that strange way, Princess Syalis has become the hero these kinds of people need to champion around to better suit their needs for the ultimate snooze-fest! 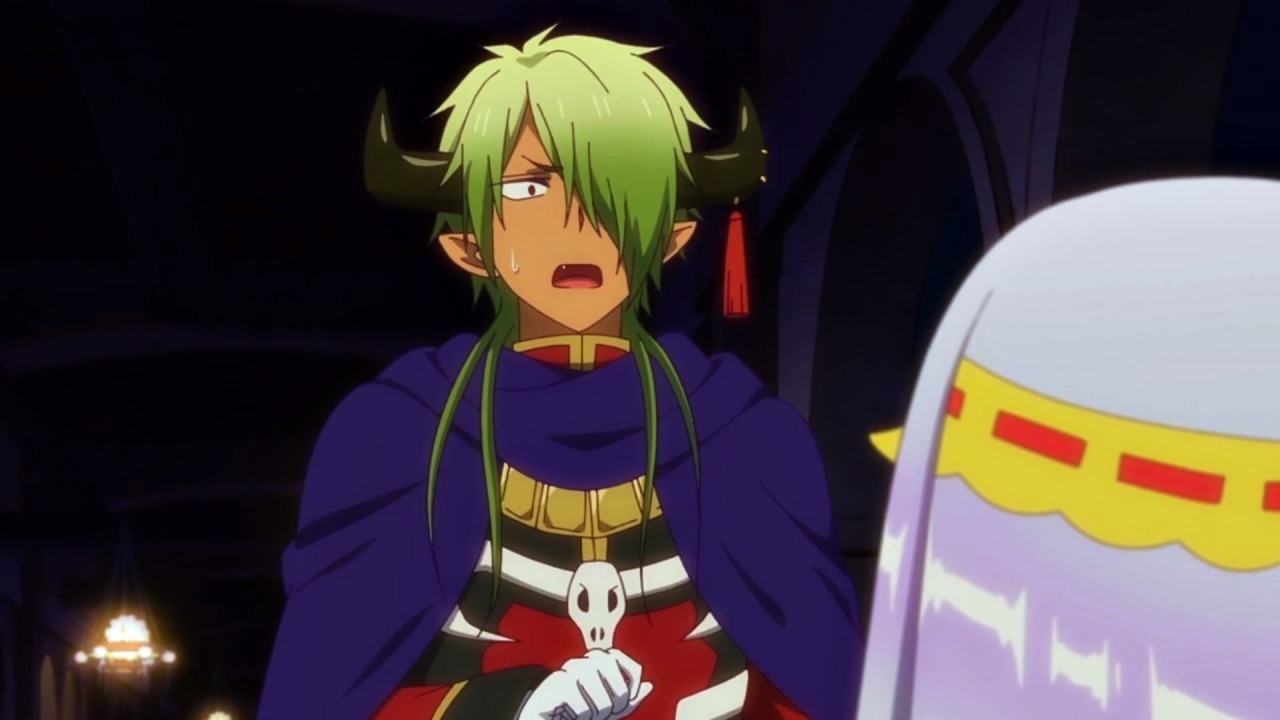 Director Mitsue Yamazaki knows how to pull big laughs from a small or even overused premise. Her work on Monthly Girls’ Nozaki-kun and How Heavy Are the Dumbbells You Lift? have showcased her skills at bringing forth one hilarious scenario after another, even if the joke has been done before. The trick is the art of the punchline, which is what author Kumanomata and anime series adapter Yoshiko Nakamura have perfected in a series whose premise should’ve been a mere one-trick pony. Turns out they’ve taken a page out of Benny Hill’s book, and have crafted thousands of different punchlines for one singular joke, and they all land flawlessly!

It helps that the studio responsible for both Nozaki-kun and Dumbbells are also helming Sleepy Princess in the Demon Castle. Doga Kobo are masters of creating cute anime characters and placing them in silly situations. The show’s painted in bright fairy tale colors, with the character designs ranging between being adorable or — in the case of some of the demons — threatening. Of course, it’s when Princess Syalis dives into her quests when the series shines, as the animation can be either beautifully detailed or comically (and intentionally) choppy in order to elevate its jokes even further. 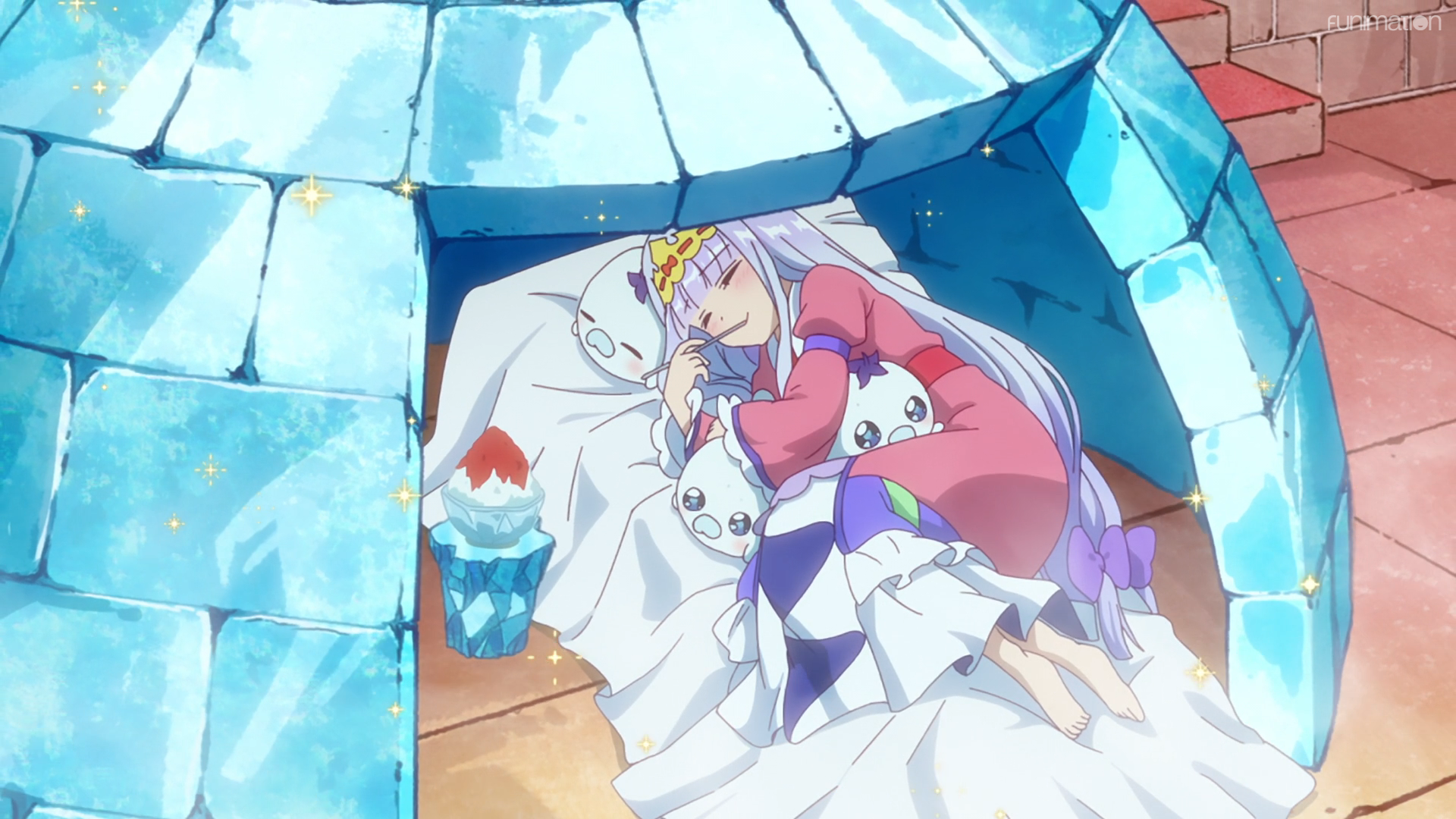 Minase’s voice work as Princess Syalis is what carries the entire cast towards top-tiered acting. Her adorable voice contradicts many of her dastardly deeds, in a way that makes the residences of the demon castle tremble in fear whenever she leaves her cell at her own accord. Matsuoka captures his frustrations brilliantly, as his anger spews through whenever Princess Syalis mucks up something to suit her needs or when he gets impatient over the hero taking his sweet time to rescue his captive. (It’s also noteworthy how well both Minase and Matsuoka play off of one another, a chemistry that’s been bubbling terrifically since they played Hestia and Bell Cranel in Is It Wrong to Try To Pick Up Girls In a Dungeon?.)

The music also fits well with the show’s RPG-like setting. Composer Yukari Hashimoto (Mr. Osomatsu, Kakushigoto) goes for more shorter musical pieces that feel right at home with old-school Final Fantasy or Dragon Quest. You honestly cannot help but smile when you hear the trumpets blow when Princess Syalis completes a quest, or laugh when the guitars wail while the maiden goes more hardcore for her sleeping needs. Minase performs the brightest opening theme of Fall 2020, as “Kaimin! Anmin! Syalist Seikatsu” delivers an Alan Menken-like showstopper that’ll have everyone dancing in their chairs. Meanwhile, ORESAMA continues to be a nonstop hit-making machine, as their end theme “Gimmme!” is a pop gem that shouldn’t be missed.

There are many kinds of heroes people can find in anime in 2020, but no one is more relatable than Her Royal Tiredness. Sleepy Princess in the Demon Castle is hilarious, a beaut to look at, and — above all — someone we can all root for and emulate. It shines as one of the best anime of the year, and while it may not be the crowning achievement of 2020, it certainly is the one that represents the mood and struggle that everyone right now is going through! Hopefully soon, we can all get ourselves a good rest that even a Demon King would be a fool to wake us up from.

Sleepy Princess in the Demon Castle can be viewed on FunimationNOW, and has been licensed by Funimation. Episodes 1-7 have been observed for this review.