GAME REVIEW | A Dreamy Ghibli-esque Adventure In "Giraffe and Annika" 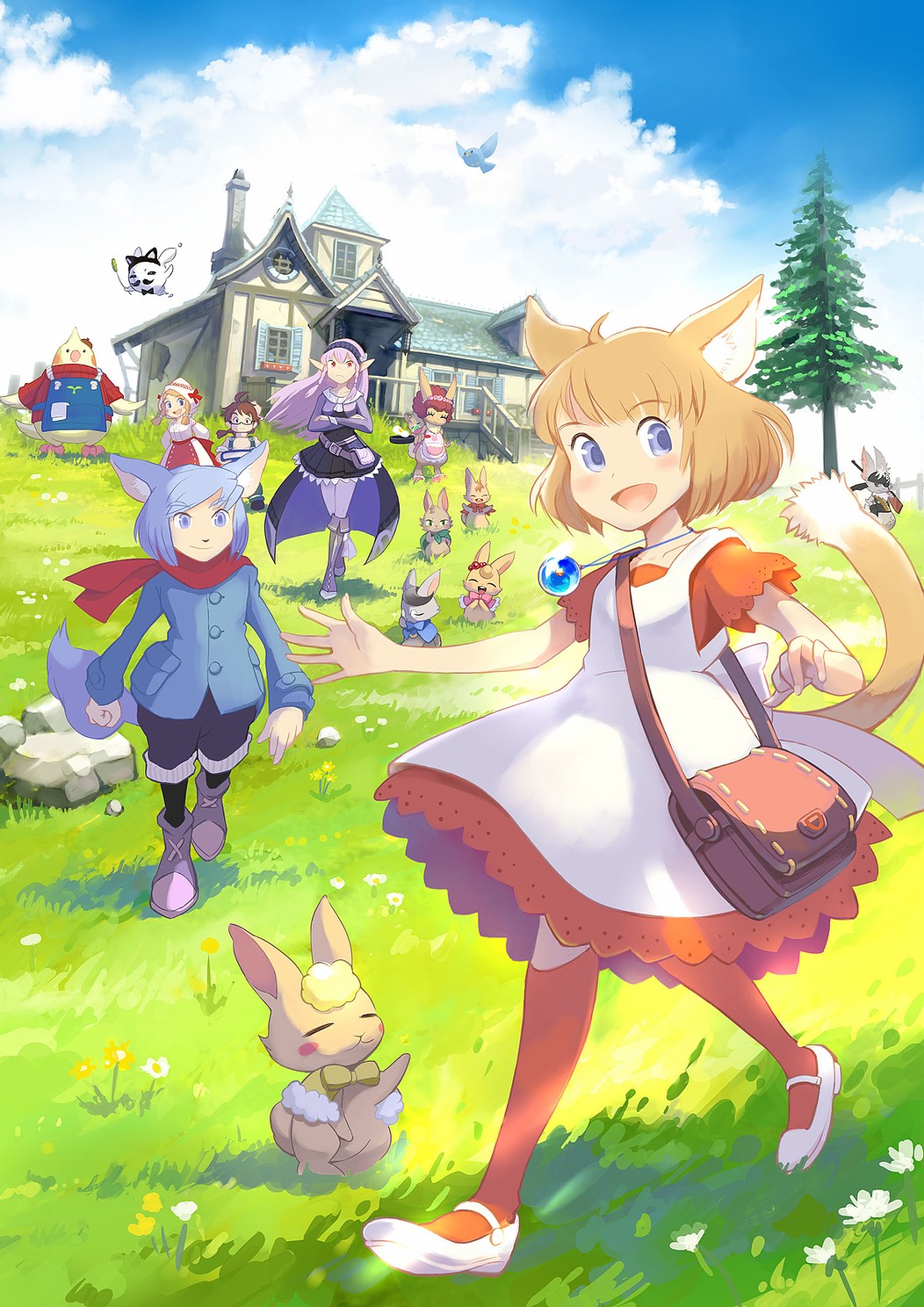 GAME REVIEW | A Dreamy Ghibli-esque Adventure In "Giraffe and Annika"

I honestly can’t remember the last time I felt warm & fuzzy after playing a video game. While something like Pixel Reef’s Paper Beast left my body riddled with goosebumps, the emotion of pure, relieving joy has not come to greet me all throughout this year. Considering what this world’s currently going through, any sort of interactive bliss would be a welcoming change against a backdrop where everything feels chaotic. Thank the gods for Atelier Mimina, who have successfully given me a large dose of happiness in the form of their debut video game Giraffe and Annika.

The latest game from Atsushi Saito (GitarooMan), the story follows the amnesiac Annika on a journey through the strange island of Spica. With a little aid from a young boy named Giraffe, Annika must traverse through the lands and waters to find pieces of a mysterious star. As she treads through caves and underwater realms, Annika will often find herself face-to-face with mischievous ghosts and a witch named Lily. As she finds the pieces of the star, Annika’s memories slowly return to her, as the truth behind Spica Island is slowly revealed. 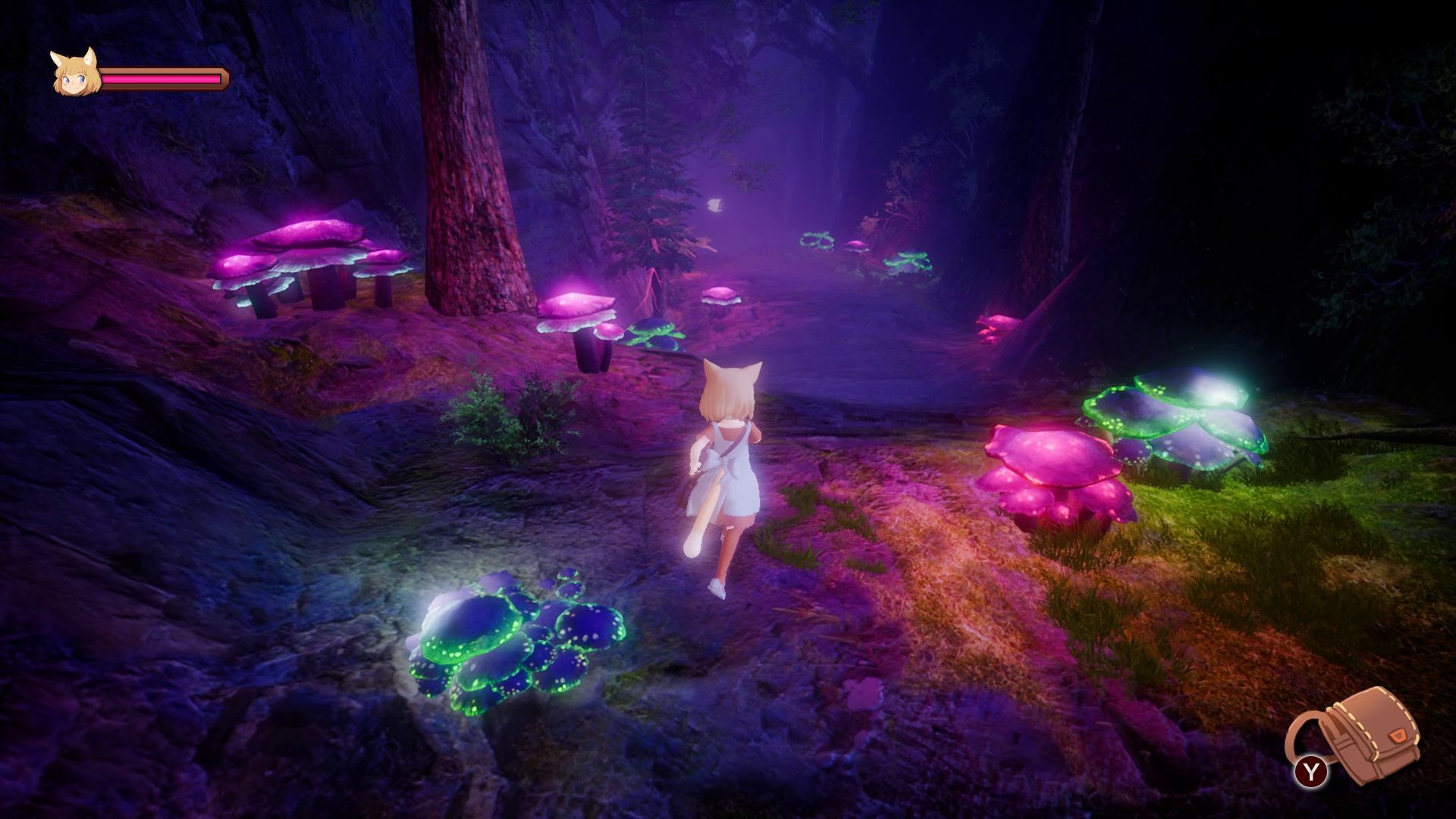 Unlike the majority of adventure games, Giraffe and Annika takes the pacifist route when it comes to protecting one’s self. There is no punching or kicking or using cartoonishly large weapons to deal with foes; instead, it’s about evading danger and keeping Annika safe from harm. On paper, a game like this sounds like a bore. Fortunately, that’s far from the truth, as Atelier Mimina place a huge emphasis on exploring Spica Island. And believe me when I say that you’re going to want to take in all the sights and sounds that this game has to offer.

Despite it being a small island, every nook and cranny is filled with beauty and personality. From the character designs of Annika and the Rabbit Family to the gorgeous lighthouse and observatory, you will often find yourself embracing just how gorgeous of a world you’re roaming in. While it may not have the gloss of a AAA game, it makes up for it with the amount of brightness and warmth that every beach and green hill has to offer. All of this capped off by some lovely dance motion, especially when it comes time for the boss battles. 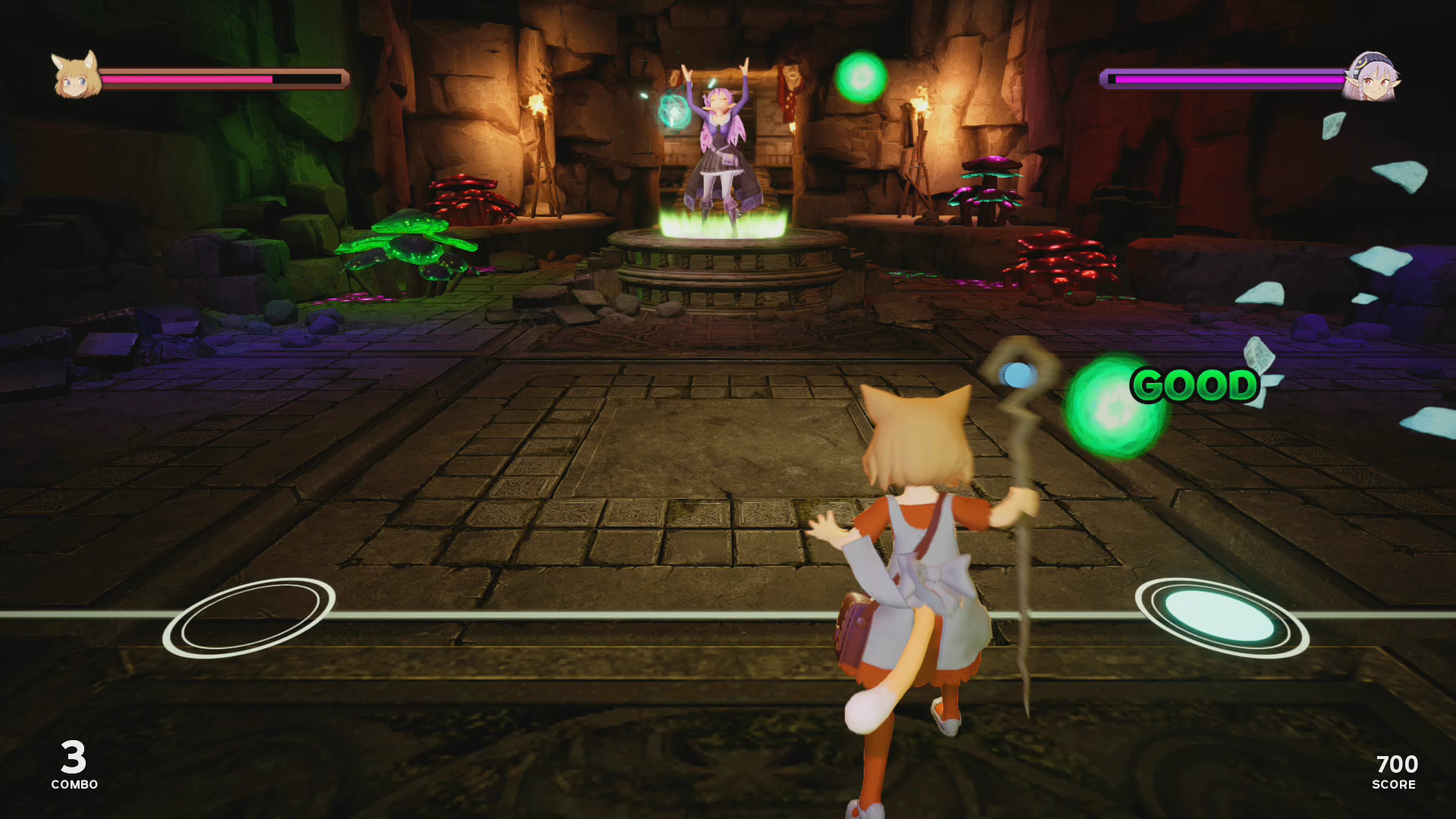 At the end of each of the five worlds, you will come face-to-face with Lily, who’ll you’ll fight in a rhythm game style. By tapping the action buttons at the right moment, you’ll start taking away Lily’s health while weakening the likes of king crabs or giant robots. It’s fairly easy to get swooped up by the music, but keeping to the beat of the songs is simple enough if you play close enough attention. Although this is one of the few action sequences Giraffe and Annika has to showcase, these moments are surprisingly a lot of fun, thanks in part to its solid control scheme.

As you keep on finding more star fragments, Annika will learn new abilities such as running, jumping, and swimming. These tricks will aid in finding new secrets hidden throughout the islands, as well as reach certain areas to reach the boss battles. Walking and running through the areas is pretty smooth, but there are times where you might make one step too many and either fall into the ocean or into some jagged rocks below. Thankfully, the game is pretty forgiving in those moments, as you’ll often find yourself reemerging from an area close to where you previously failed. 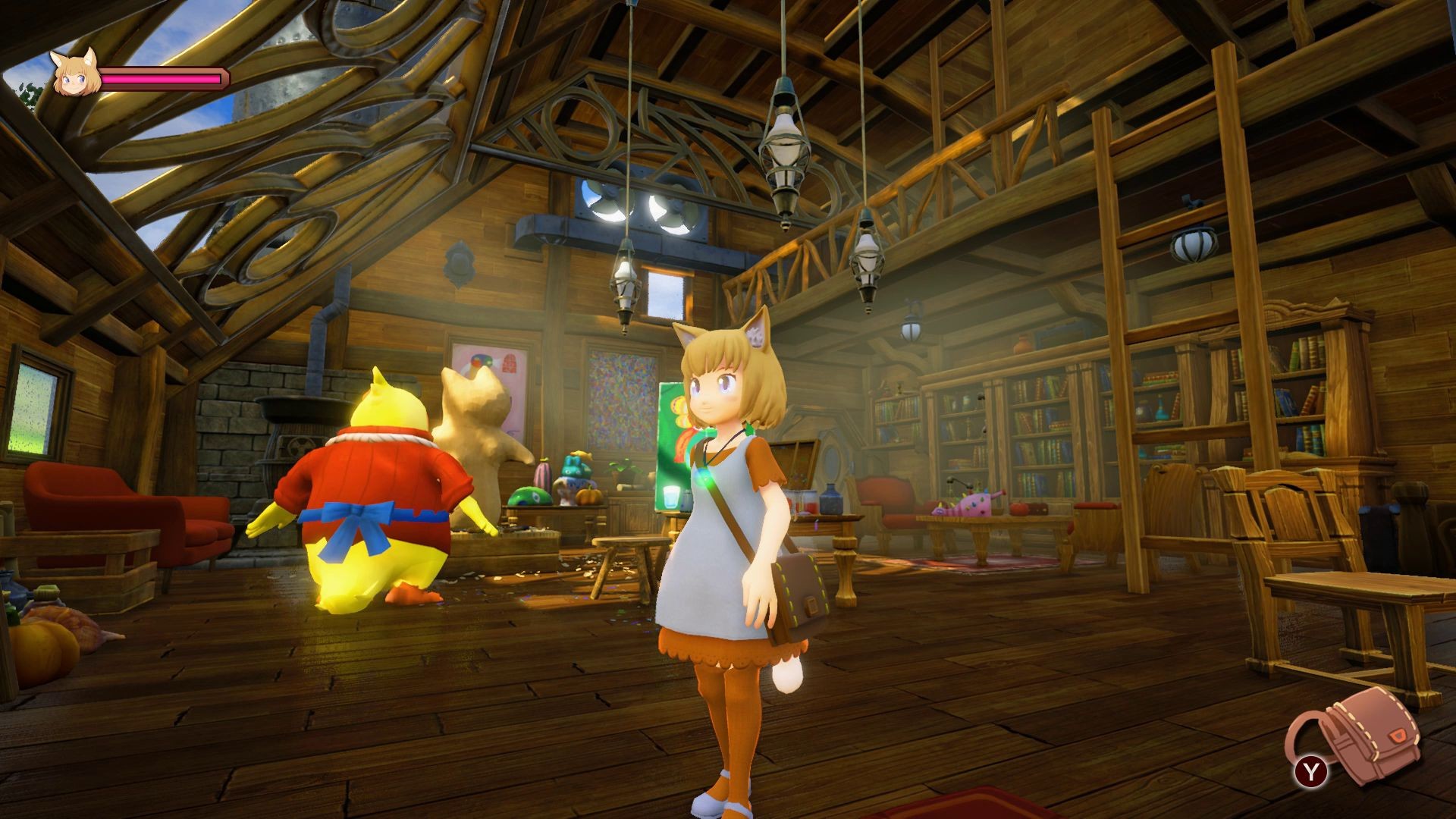 Story-wise, Giraffe and Annika is filled with big laughs and heartfelt moments. As you find more star pieces, you’ll soon discover how Lily is connected to Annika, as well as the truth behind what the island truly is. It follows a formula similar to that of a Studio Ghibli movie, with a female heroine overcoming something deep within herself while taking on a great threat to the rest of the world. (Considering she’s the star of the game, I am puzzled as to why Annika gets second billing, especially when Giraffe does only 5% of the work!)

Adding to that Ghibli aura is the soundtrack. Composer Tomohiro Harada (better known as TOMZUIN H) crafted a score that bellows with joy during every part of the game! The tooting of clarinets and the tickling of ivories that are featured help to make this one of the most endearing and wonderful video game music of 2020. Where it shines the brightest is during the the boss battles, as the songs that play will make it hard for anyone to not wish to dance gracefully. 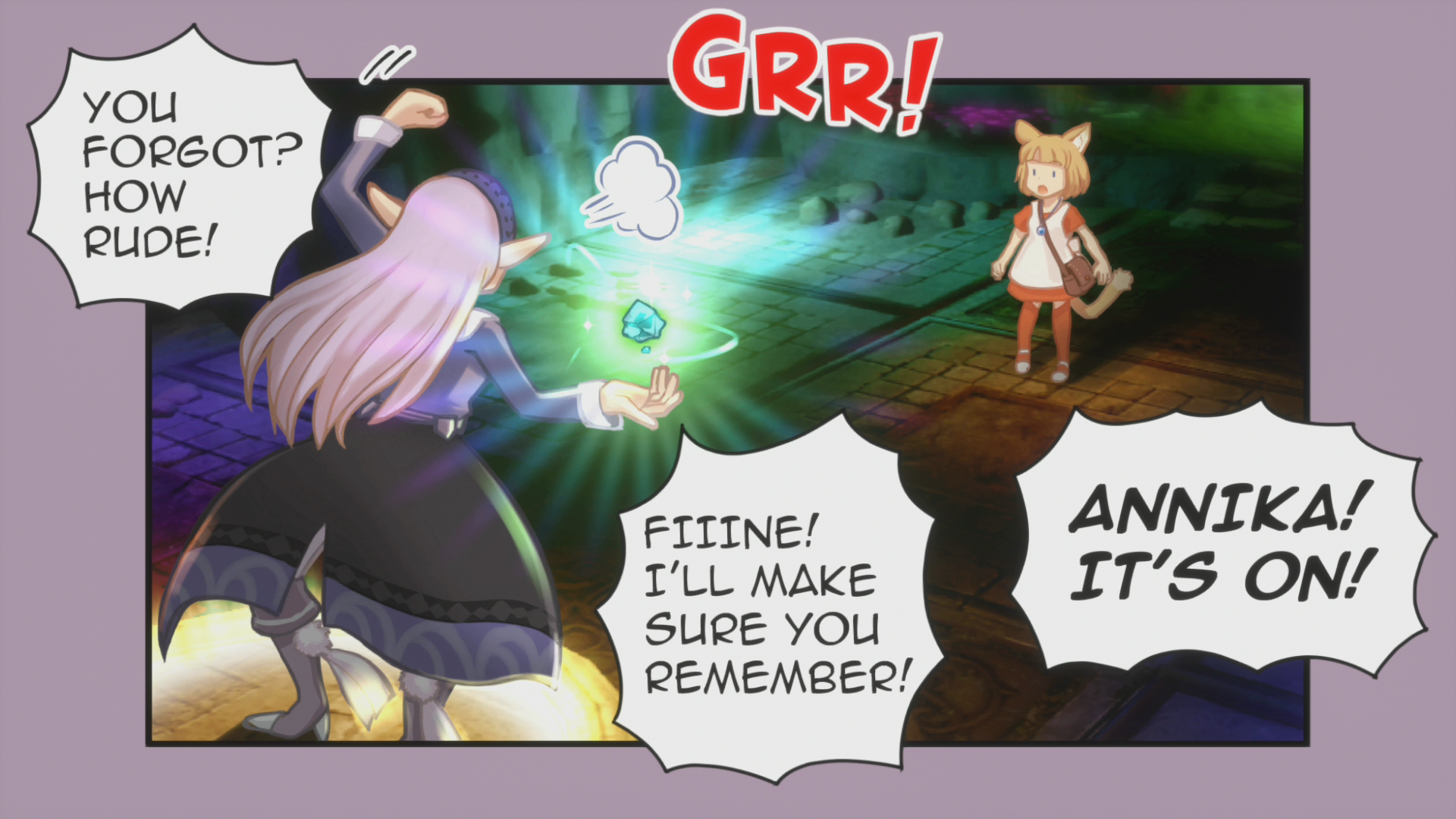 Sadly, not everything is perfect in Giraffe and Annika. The game does run pretty short, with the ability to complete the main game in about 4-5 hours. While not a dealbreaker by any means, some of the loading times can take away some of the flow that the game creates. Finally, there are the (albeit humorous) glitches that will appear in the game, which will sometimes have Annika’s tail becoming thrice as long and start freaking out while in tight movable places.

However, even with these flaws, this game is meant to be experienced more than once. Like a great film that you can turn on whenever you’d like, Giraffe and Annika offers a plethora of entertainment every time you play it. There’s also over 30 cat pictures (or "meowsterpieces") hidden throughout the levels, which can be delivered to the island art gallery. Get enough pics, and unlock some very adorable costumes for Annika to wear whilst adventuring!

If Hayao Miyazaki ever made a video game, it would more than likely be close to what Giraffe and Annika is. While it has its flaws, the overall beauty and fun this adventure offers will stay with you for a very long time. With a strong debut like Giraffe and Annika under their belts, it’s clear that Atelier Mimina has a very bright future ahead of them!

Now can someone make an anime film based off of this game?