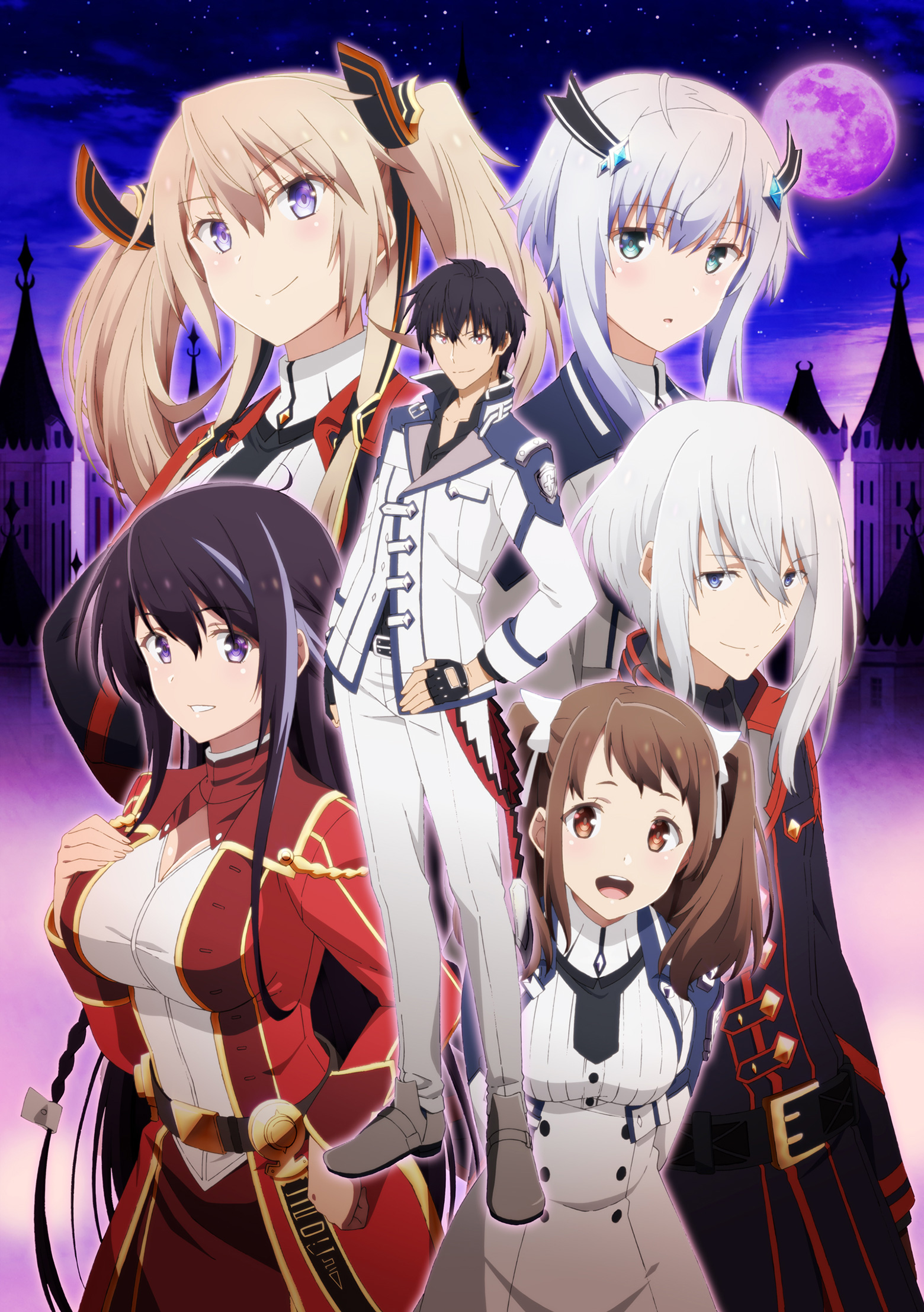 When it comes to heroes, the ones we love most are the ones that have their share of physical and/or emotional scars. Batman still mourns his parents death; Wolverine deals with trying to figure out who he really is; and Scott Pilgrim has trust issues when it comes to getting close to the people he loves. Yet they all persevere and become the hero the world desperately needs. As far as I’m concerned, Anos Voldigoad (Tatsuhisa Suzuki) — the main character of The Misfit of Demon King Academy — has no scars to bear, making him quite the hard hero to relate to. But despite that, Anos winds up being one of the most fun and fist pump-worthy heroes to arrive in the anime realm of Summer 2020!

Based on the light novel series by Shu and Yoshinori Shizuma, The Misfit of Demon King Academy follows Anos’s journey to reclaim the Demon King throne he once sat at 2000 years prior. Now reincarnated and hitting high school after merely a month since being reborn, Anos cuts paths and pushes anything out of his way in order to achieve his goal. Although unnecessary due to his power, he has a couple of allies by his side to give him just the tiniest push forward: the sisters Misha & Sasha Necron (Tomori Kusunoki and Yuko Natsuyoshi, respectively). As remnants of his past begin to unveil himself, Anos finds that the way back to the throne will be slightly complicated when a fraud currently sits comfortably on it. 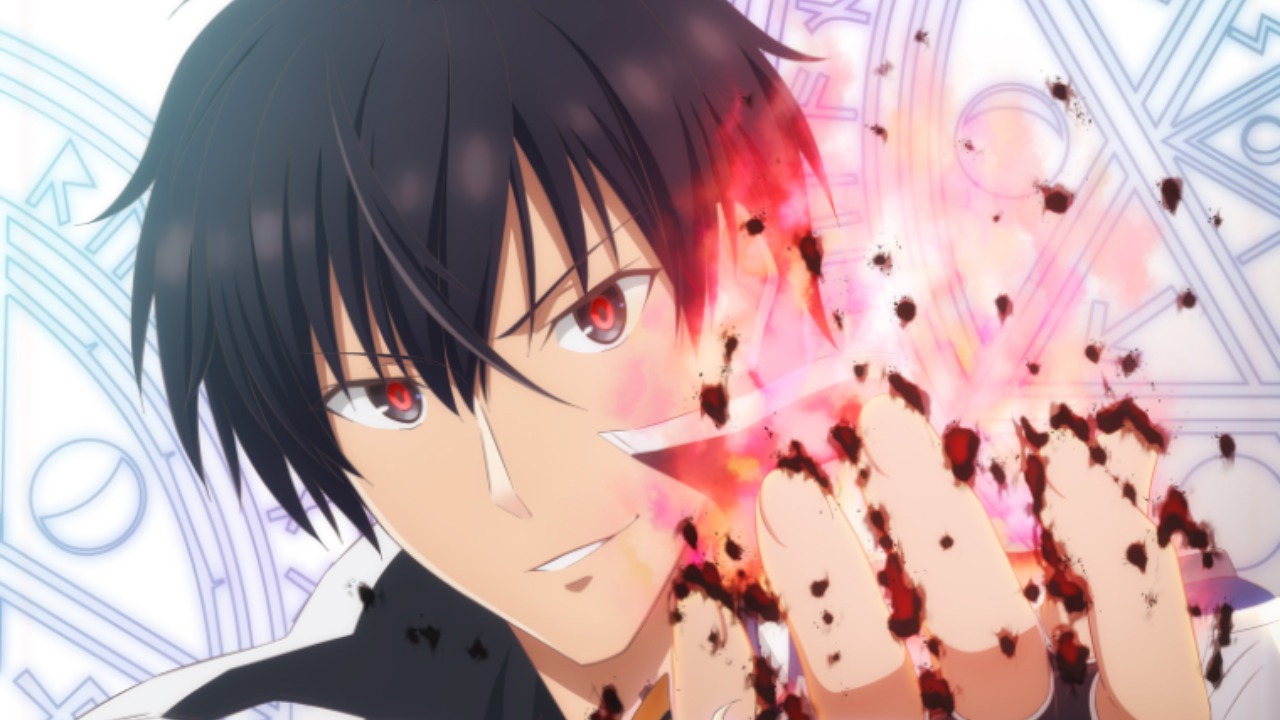 Anos does not waste anyone’s time with what he’s capable of, demonstrating the level of power he has on his first day of Demon King Academy. With the skills that he already has, he is capable of straight-up murdering any rude classmate, and then bringing them back to life over and over again until they finally yield to his magic. This trick is done without even the slightest bead of sweat dripping from Anos’s head, as his smirk showcases the confidence he has to take on any person that stands in his way. Not even the teachers who are suppose to groom him and his fellow classmates to being a Demon King candidate have what it takes to tame the beast that rests within his very essence.

In some cases, a show with a character like this would have viewers rolling their eyes and be bored with his antics. After all, how can somebody this powerful be shown to evolve throughout a serious? One would get tired of seeing them win fight after fight without ever so being seen in a moment of dire straits. But there in lies the thing that makes Anos Voldigoad such a lovable (anti-)hero: his charisma. 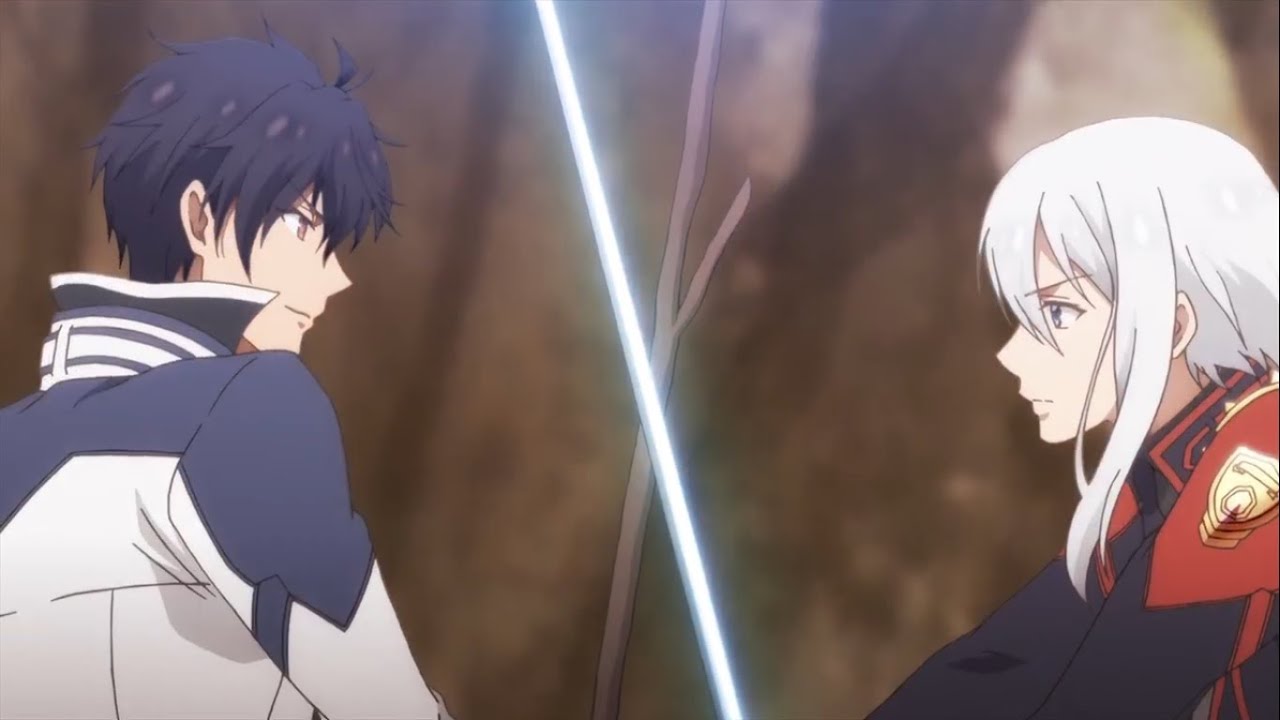 Viewers can’t help but fawn over someone who takes every punch, kick, and even amputation with rock star-leveled stride. Anos knows what he’s able to accomplish when a road block is placed in his way, and in some cases he often needs to just lift a mere finger to do just that. If you want to talk about how ridiculous Anos can get when an opposing force tries to back him to a wall, look no further than when he literally lifts a Goddamn castle off the ground, spins it like he’s a Harlem Globetrotter, and throws it like Dave Grohl tossing a drumstick to his fans! He’s so powerful, that it’s actually funny!

And that plays heavily into the charm of The Misfit of Demon King Academy. There are many fantasy series, books, and anime where powerful protagonists have something that keeps them from going all out at every corner. Anos is not one of those types, as he plans everything ten steps ahead like an expert chess player. The thing that makes this anime so much fun isn’t the will he/won’t he part of the story; it’s the how! You know Anos is going to come out of any situation a-okay; it’s watching him literally work his magic to make the impossible possible that makes every moment of this series a blast to watch! 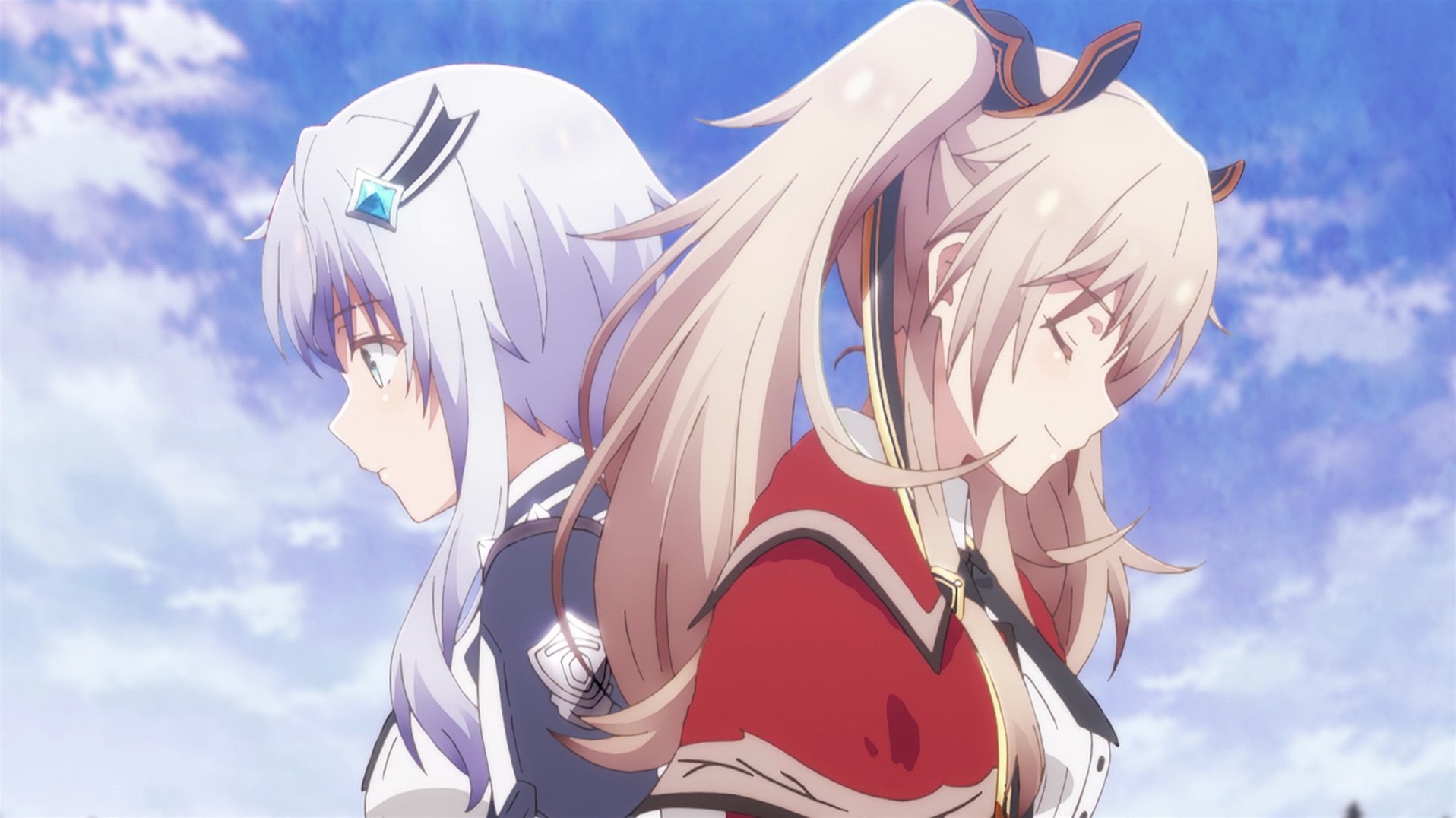 Surprisingly, Anos isn’t the only character worth giving a big thumb’s up over. The sisterly duo of Misha and Sasha have loads of charm and sweetness to dish out, even if the latter seems keen on wiping out the former early in the series. But Anos pulls something out of them that keeps their chins up and eyes faced forward towards the future. As their confidence level grows and their trust in Anos evolves, the Necron twins not only bring a lot of fun to the table, but also a heaping helping of heart to the overall story.

Speaking of things of the heart, Anos’s parents Isabella and Gusta (Aki Toyoskai and Shinobu Matsumoto, respectively) are the two best cheerleaders any son could ask for. The pride they have in their one-month old son is not only hilarious, but also as adorable as a litter of newborn corgis. You can’t help but smile when Isabella cries tears of joy whenever Anos accomplishes something, or whenever Gusta is given the opportune moment to pat his son’s back over a job well done. And the love is returned thrice times over by Anos, showcasing that he’s a Demon King with a heart of gold. 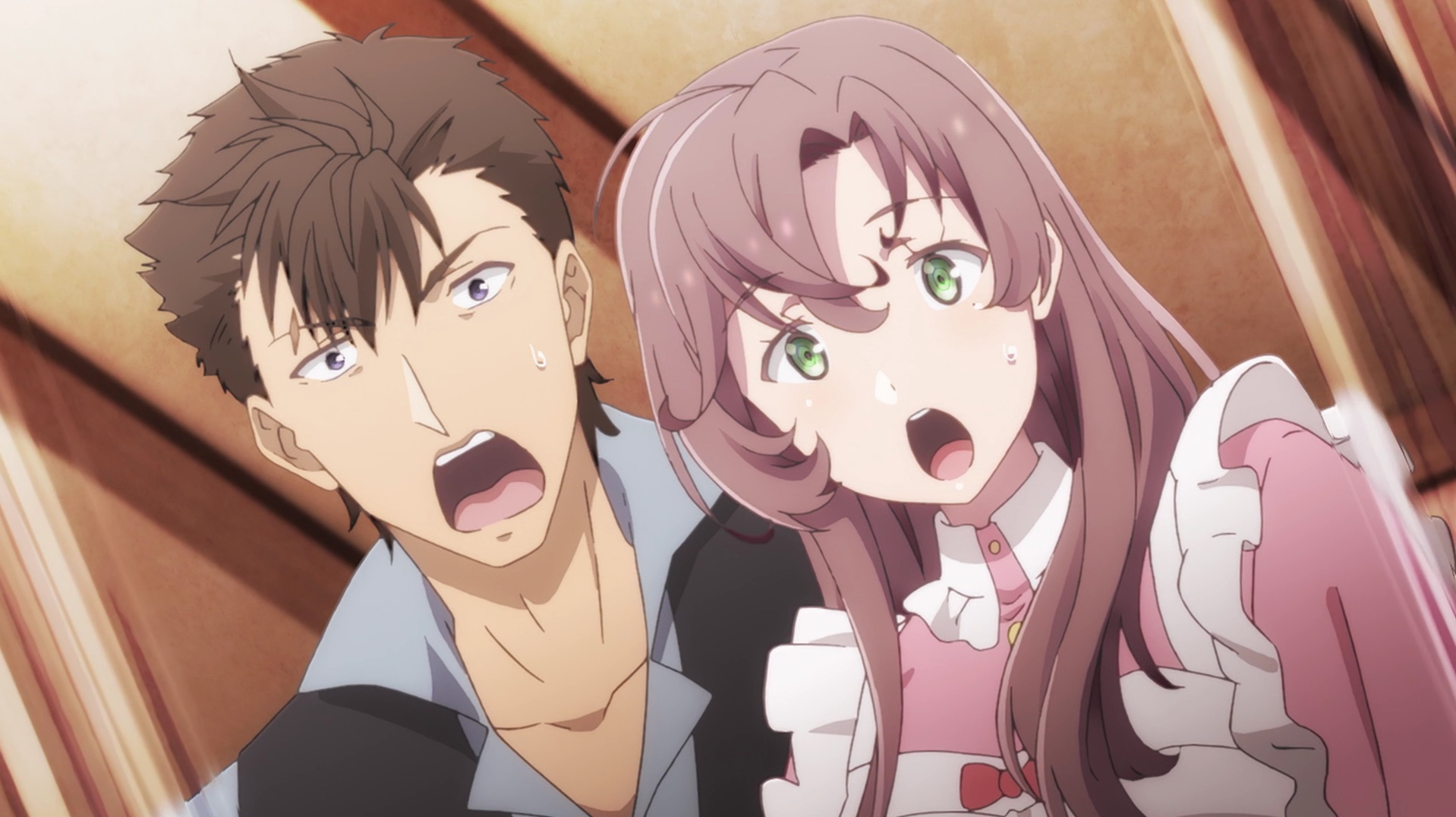 Even as the allies in Anos’s corner continue to grow in numbers, there’s enough hostility in the Demon King Academy that keeps a good deal of mystery well-hidden for its viewers. It leads up to who’s truly pulling the strings in the world, giving way to the false Demon King who has taken over Anos’s original prophecies. While the viewers may deep down know that Anos will more than likely come out on top of anything that stands in his way, the real entertainment comes with the journey back to that throne. As greater and more powerful foes arrive, Anos unveils another trick up his sleeve that makes him all the more fun to root for.

The voice cast of The Misfit of Demon King Academy deserves a lot of credit for how these characters brim with life. Suzuki’s Anos is very much like Tom Ellis’s Lucifer, delivering confidence and coolness with every sentence uttered. Kusunoki starts off timid as Misha, before she grows a backbone and comes to life with great stride. Natsuyoshi could’ve easily delivered a tsundere-like performance as Sasha, but her portrayal evolves into a strong and relatable person that makes her a worthy right hand woman to Anos’s plans. Of course, Toyosaki and Matsumoto are simply a joy to hear as Anos’s parents, adding a big dose of comedy to their kindhearted mannerisms. 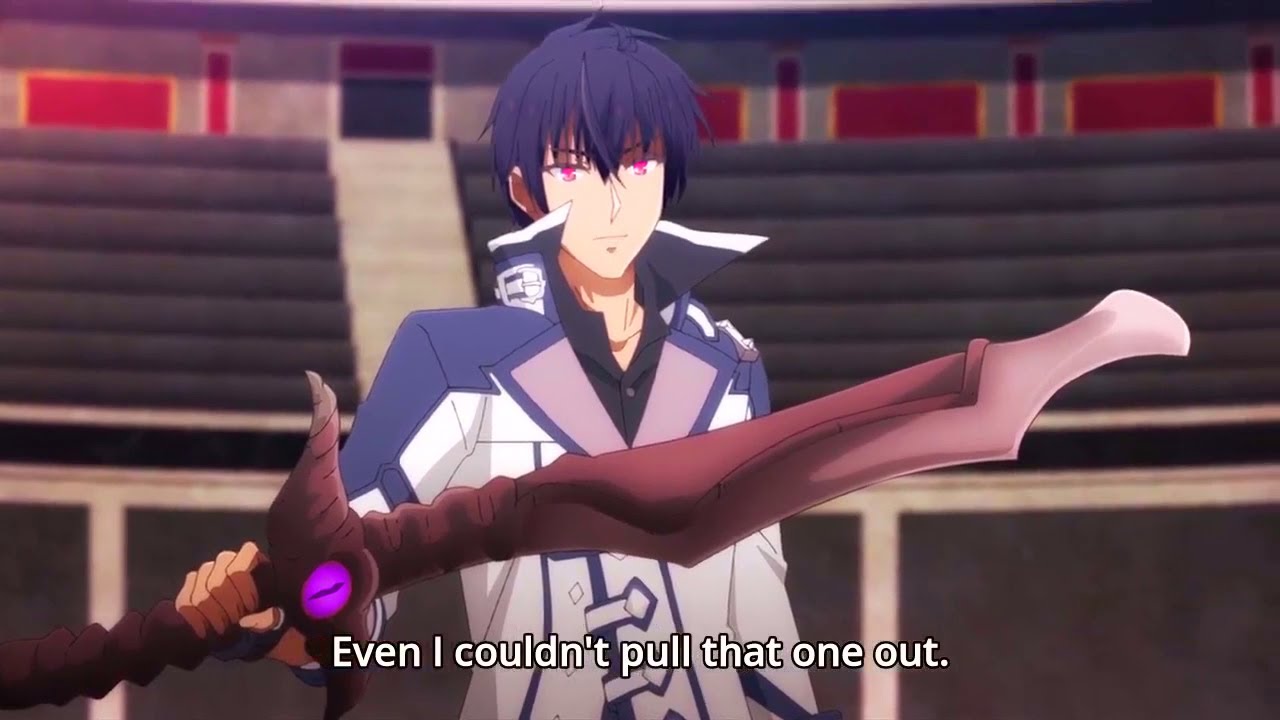 It’s impressive seeing how far along SLIVER LINK has gotten in the fantasy anime game. After dealing a lackluster series like Wise Man’s Grandchild last year, the fact that they’ve animated the best fantasy shows of 2020 with BOFURI and My Next Life As a Villainess is something worth giving props to. Now with The Misfit of Demon King Academy under their belts, they’ve seemingly become the go-to animation studio for anime fantasy series. Here, the fights are impressive and the world is surprisingly brimming with life despite its dark setting. While lacking originality in the character design department, the heroes and villains still look good enough to have them stand out from any of the other fantasy shows currently airing.

Keiji Inai has a great track record when it comes to scoring fantasy anime, as evident in his work in Is It Wrong to Try to Pick Up Girls In a Dungeon?. Here, the score brings enough oomph to stand on its own, but there are some songs that feel like cut tracks from his previous contributions. Opening theme “Seikai Fuseikai” by CIVILIAN is a strong rock track, one that pairs up nicely with Anos’s badass personality. Meanwhile, Kusunoki takes the reins for the end theme “Hamidashimono,” with her beautiful vocals matching well with the intensity of the song’s orchestrations.

Overpowered main characters can get dull, but The Misfit of Demon King Academy seems to be the exception. One can’t help but love the over-the-topness that Anos delivers every week, as he pulls out one Deus Ex Machina after another to overcome every obstacle. Is it meant to be funny? At this point, who cares! The Misfit of Demon King Academy is entertaining as hell, and I for one welcome the anime world’s new lord and savior with open arms!

The Misfit of Demon King Academy can be viewed on Crunchyroll and VRV. It has been licensed by Aniplex of America. Episode 1-8 were observed for this review. Promotional consideration provided by Ellation.