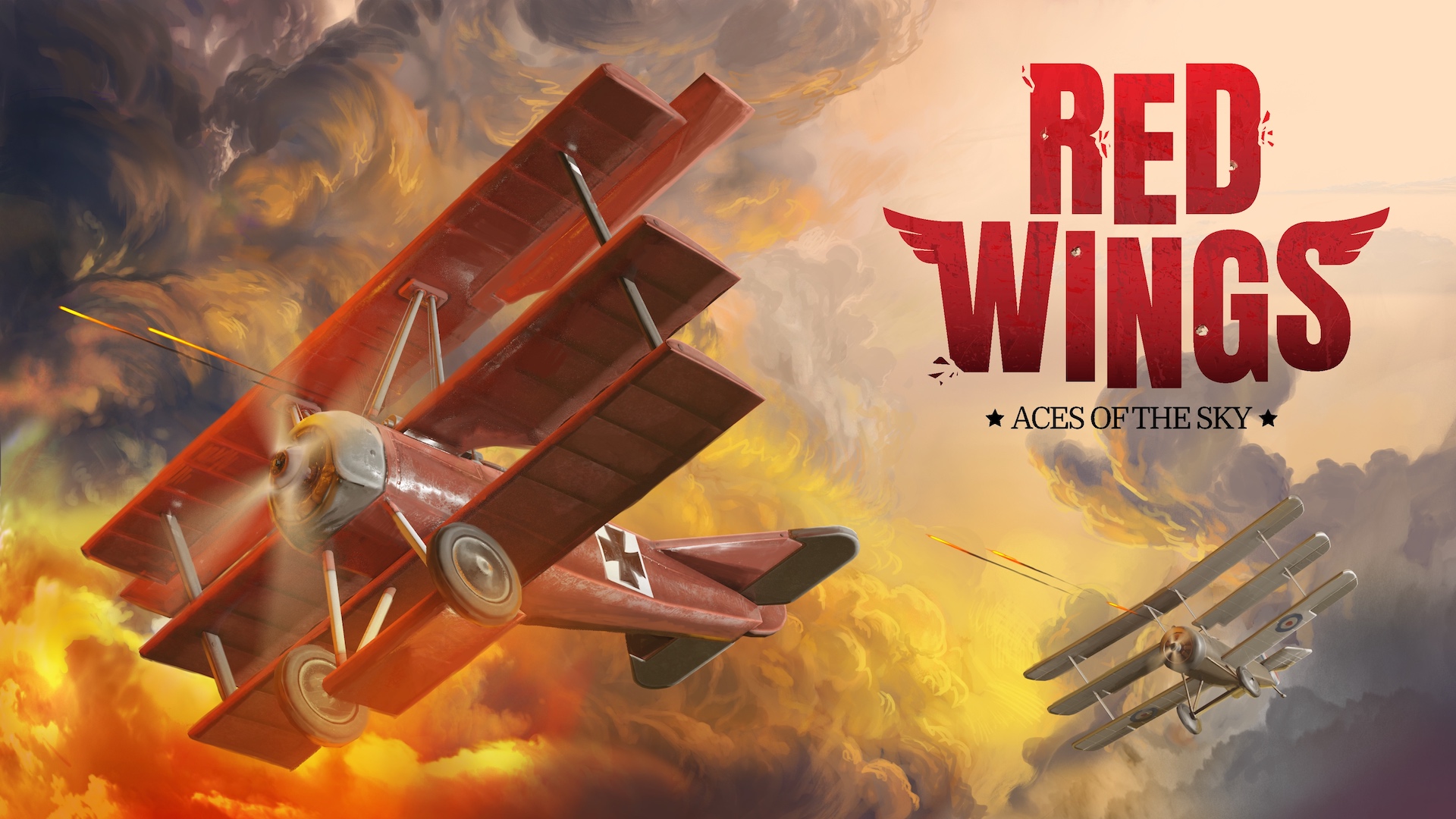 I love a good dogfighting game, especially those based during World War I. The thrill of fighting the Red Baron is something that I’ve held a great appreciation for since I was a little kid. From the Red Baron series on PC to the criminally underrated Snoopy Flying Ace on Xbox 360, these games have you taking to the skies and becoming the king of the clouds. All in! Games has taken this feeling and injected it with style, in the form of their latest title Red Wings: Aces of the Sky!

Taking place during The Great War, Red Wings has you take control of both sides of the battle, with missions alongside the Entente Powers and the Triple Alliance. These missions will have you fighting against enemy planes, bombing hideouts, shooting down blimps, and learning the skills to properly refill your plane. As the game takes more cues from arcade-styled play rather than simulation, the battles are filled with excitement at every turn. However, it’s not at all easy to reign supreme in the air. 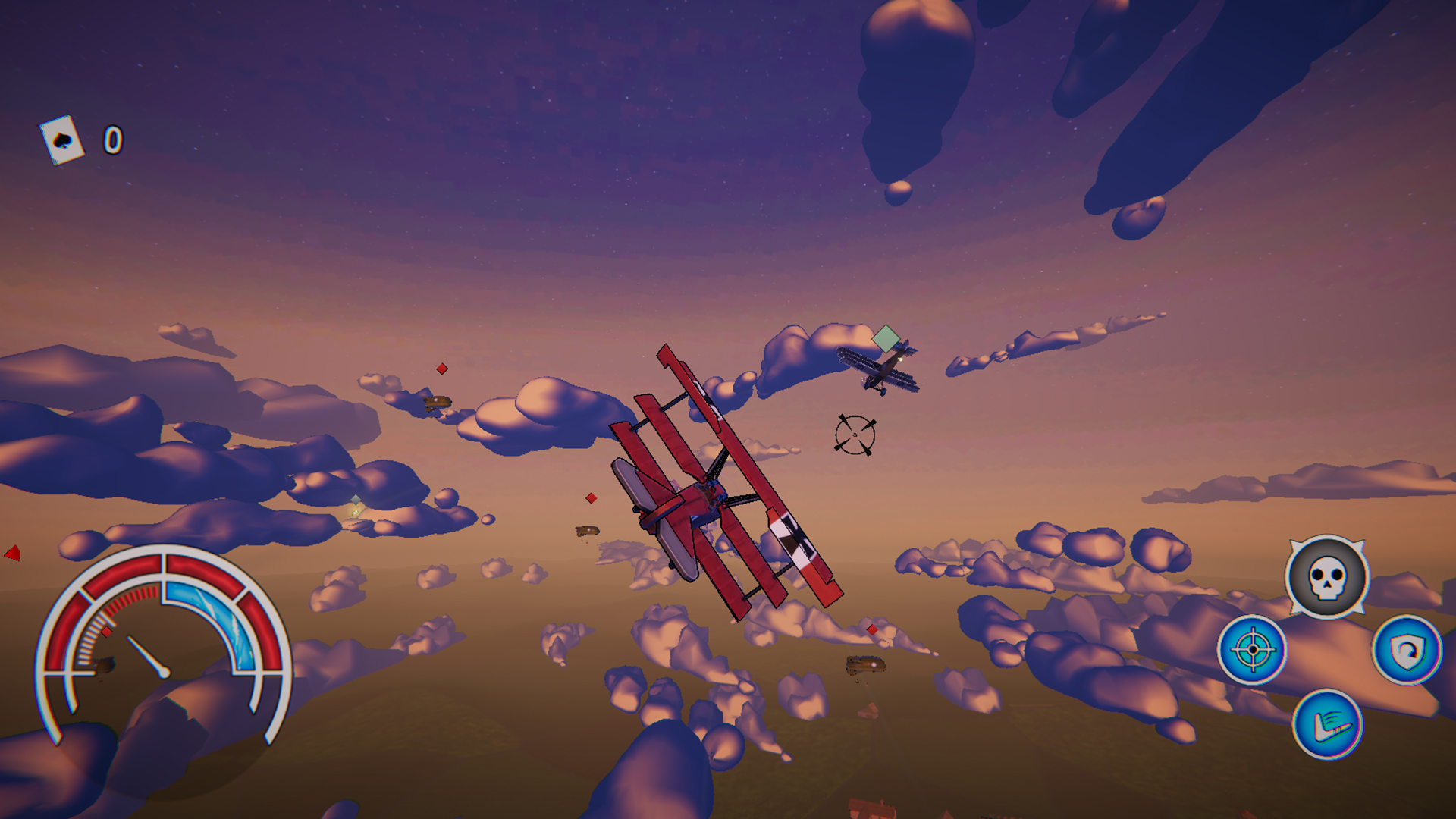 Your enemies — be it on the side of the Triple Alliance or Entente Powers — can be brutal pests! Once they get your sights on you, trying to get them off your tails is easier said than done. Fortunately, as you get used to your surroundings, you can turn the tables on them with a sinister grin on your face. And when your enemies start to tumble in balls of fire, there’s a true adrenaline rush that comes over you as you tally up points and skills.

Besides your normal ammo, you are given four other skills to use in the air. Barrel rolling will give you temporary invincibility, which you can use to smash through enemies with glee. 180ing will give you a quick turnout, coming in handy when an enemy that you’re tailing makes an unexpected turn. Players can also call upon a squadron to shoot down someone. Get enough kills, and you’ll unlock one other special move: the ability to pull out a pistol and shoot an enemy pilot point blank (and yes, this legit happened)! 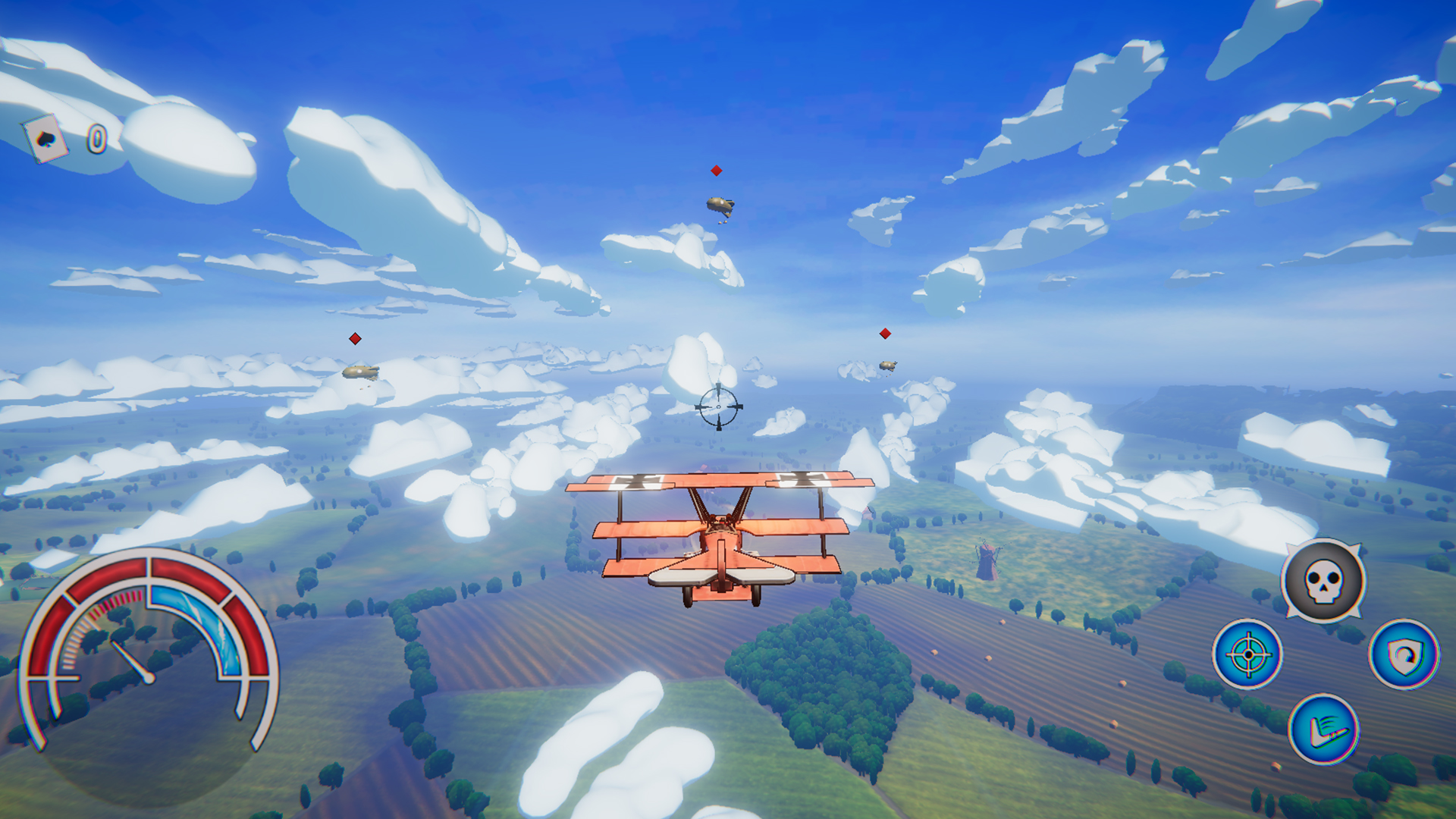 Controlling Red Wings is surprisingly easy. Its tutorial does a great job with teaching the maneuvers without making things confusing. Shooting while flying at the same time also won’t give you cramps like most games with flying missions (looking at you, Saints Row!), giving way to smooth gameplay during every mission. The only thing that can be slightly tough is the quick turns, which take a little bit to master compared to the other moves.

Depending on how well you do with each mission, you can earn skill points that will give you more advantages. Better aiming, more protective skills, and the ability to see through clouds and closer fuel stations will assist with not only completing later missions, but getting higher scores in past ones. Gaining these skill points can be tricky, as the requirements for earning them can either be completing missions at a specific time or getting a specific score. Again, that trickiness is due to how smart the enemy AI can be. 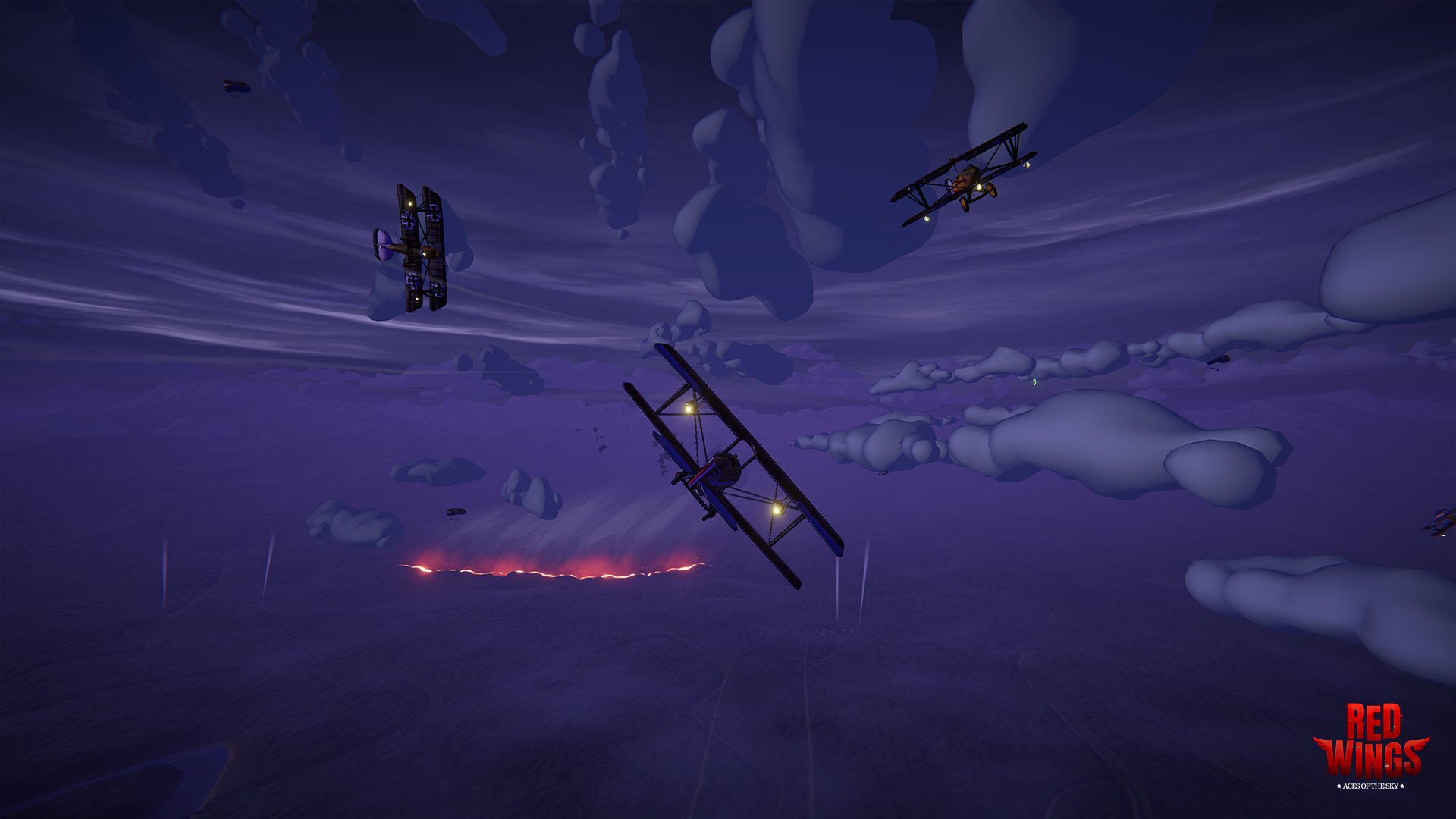 Unfortunately, your allies in the air don’t have the same amount of brains as the enemies did. During my time with Red Wings, I never saw any pilots on my side taking down the enemies. Some would get a shot or two to help lower a plane’s health, but I always found myself having to deal the final blow every single time. As such, some levels can run a lot longer than they should.

One of the big offenders of the time-suckers in this game is the guarding of observation balloons. These levels can take up to 20-30 minutes to complete, as you have to concentrate on both enemies and your balloons. It can get really difficult, especially when you are forced to restart 20 minutes into the mission after your last balloon is destroyed! To be blunt: it can be pretty frustrating! 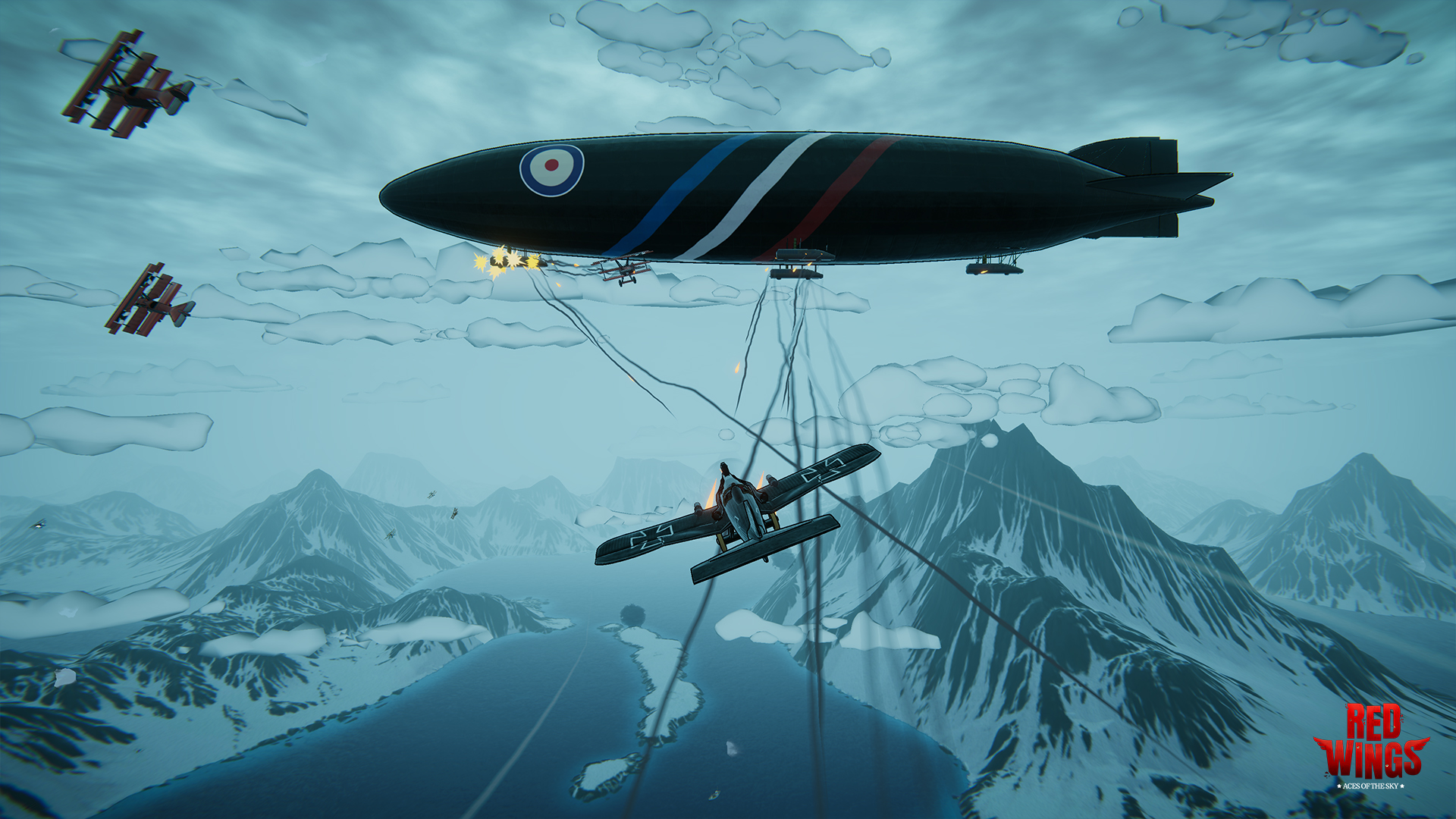 Thankfully, Red Wings gives you the option to play with a friend, making some of the longer levels go by a bit quicker. Sadly, only couch co-op is available as of this review, with online mode possibly coming somewhere down the line. (The fact that social distancing is still going on makes playing with a pal a little more difficult, too.) With that being said, the co-op is showcased well to make it worth pulling out whenever a fellow gamer is in your household.

One other fun mode is Survival. You keep on fighting one wave of enemy planes after another, until your plane can’t take it anymore. It may be a mechanic that’s been done in so many other games, but it’s still a blast to experience. (And yes, it can be experienced in co-op mode.)

Red Wings: Aces of the Sky is an overall fun experience, with only a tiny bit of turbulence. The missions, planes, and battles fought high above the clouds deliver loads of excitement at every turn. Although you may never become the next Red Baron in real-life, Red Wings will give you as close to an opportunity to feel like the ruler of the air!