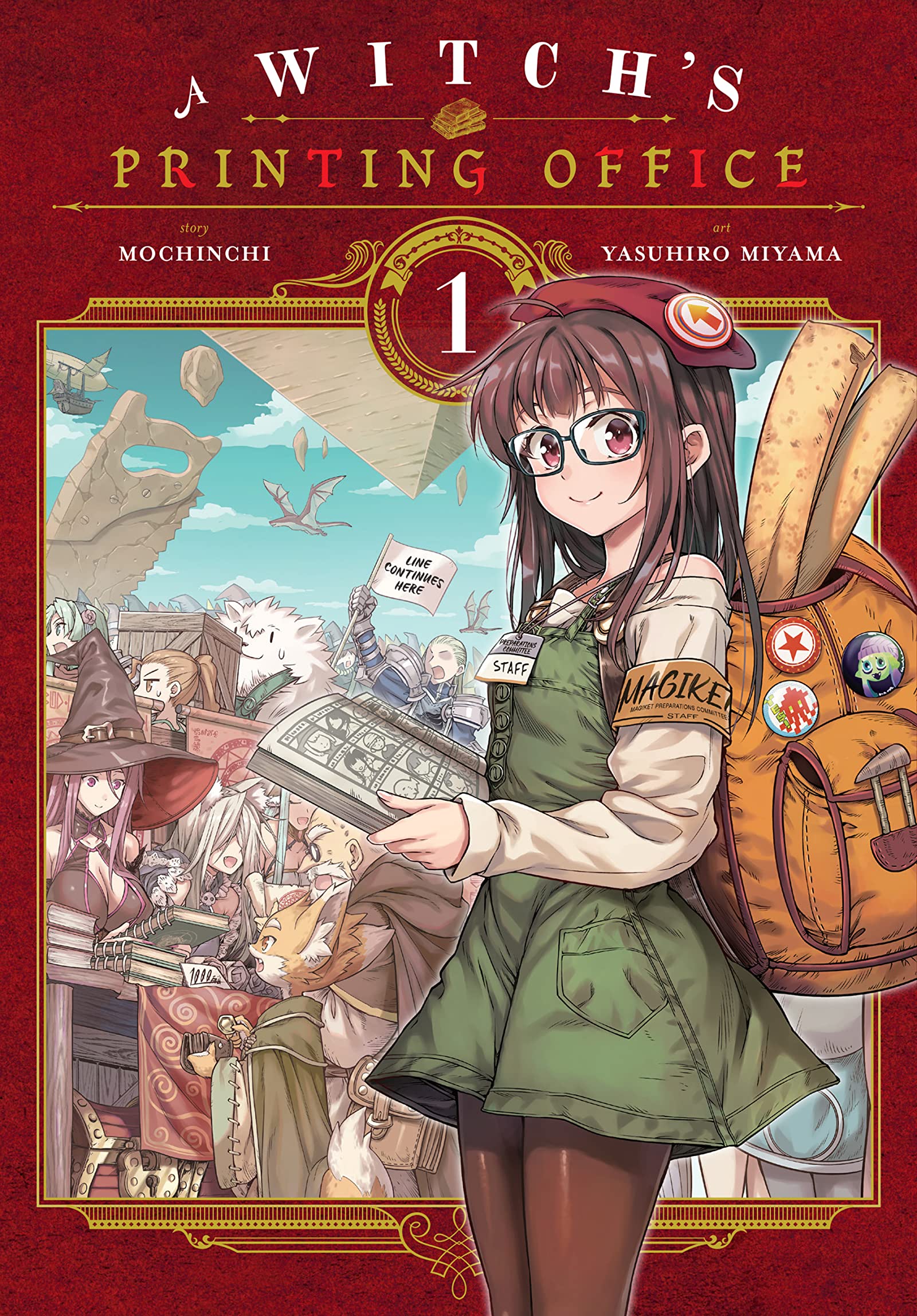 In tales of fantasy, witches and wizards alike have massive libraries of spells on-hand. One must wonder where these pieces of literature may come from, as one mere magical person couldn’t possibly do it on their own. Mochinchi and Yasuhiro Miyama’s A Witch’s Printing Office has one hypothesis to such a mystery: massive spell markets. But who would be the first to come up with such a thing?

Enter Mika Kamiya, the main protagonist of A Witch’s Printing Office. Originally from our Earth, Mika was enjoying convention when all of a sudden, she’s swooped into a fantasy world. Only with the power to copy text in a flash, Mika seeks out a spell that could bring her back home. Unable to do it on her own, she teams up the witch Claire and starts a printing business that lets her sell her copying skills to magical authors. Not entirely satisfied with this plan, Mike goes one step further: a magic book convention.

Dubbed Magiket, the event brings witches, wizards, and mages from all over the fantasy world to buy spell books and learn new tricks of the trade. But as conventions go, there’s a lot of craziness to deal with. Long lines, crowded areas, feisty clients, and the occasional rowdy con-goer are some of the things Mika, Claire, and the rest of the staff have to deal with. As each Magiket draws more interest, the more hope Mika gets that she’ll be able to find that one spell to bring her home.

One of the first things that drew me into the world of A Witch’s Printing Office is its art style. Miyama is a master at adding even the tiniest of details to armor, books, and clothing. These panels brim to life with such beauty, that this manga is worth reading just for Miyama’s craft. The mixture of cute characters, nasty monsters, and sexy witches & knights makes for a world brimming with gorgeous personality!

Story-wise, Mochinchi takes a little bit to get things rolling in his story. As this is his first manga (based off of a one-shot he did on the pixiv site), there’s a good dose of ironing out certain unnecessary plot devices that each chapter is filled with. The story can seem a little unfocused, especially when the main reason for Mika needing that travel spell not even coming up in this first volume! In laymen’s terms: this story starts of on a pretty messy pathway.

But as the first volume goes on, A Witch’s Printing Office begins to deliver plenty of entertaining storylines. The chapter where they make a catalog for the next Magiket dives into silly chaos, as even the logos of the merchants can’t sit still for one second in print form. (Kudos for grabbing some notable cameos in one of the spreads, including Caramel Senpai’s infamous crazy cat!) However, the best story in this collection involves a knight named Broadway, who quickly finds out that working at a convention is just as brutal as a hard-fought battle in war.

A Witch’s Printing Office doesn’t start on the right foot, but it certainly ends its first volume on one. Although one has to soldier through some rough patches to get to the good stories, what shines towards the second half certainly makes it worth the trek. There’s a lot of potential to be had for A Witch’s Printing Office, especially with the amount of fantastical magic that can be pulled into its world. Fingers are crossed that the next volume casts a storytelling spell that grabs hold of its readers right at the get-go!

ANIME REVIEW | All Kinds of Wrongs...

ANIME REVIEW | An Uphill Battle To...