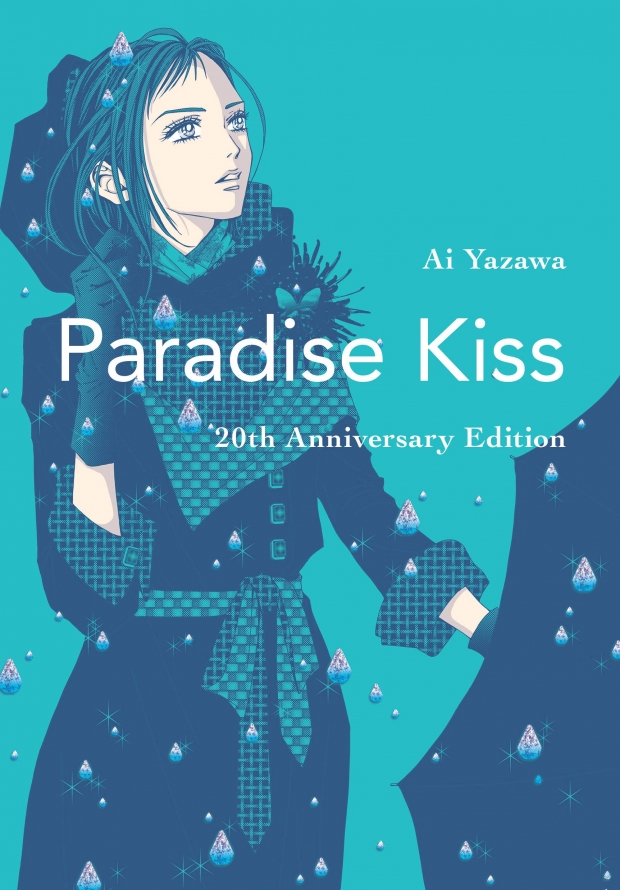 Out of all the manga writers and artists in the world, no one brings as much eclectic energy and visuals quite like Ai Yazawa. I say this knowing in full that the writer has been on hiatus for well over a decade, with her work on Nana still going unfinished as of this review. Despite this, Yazawa’s style is still considered by many to being some of the craft’s best. And nowhere is this fact proven than in her five-volume magnum opus Paradise Kiss.

Originally published in the fashion magazine Zipper, Paradise Kiss focuses on a fashion collective of the same name. One day, out of a chance meeting, a young woman named Yukari runs into Arashi and Isabella, who sees her as a potential model for their clothing. At first, Yukari seems hesitant, until the trusting hand of their leader George brings her into the realm of fashion. As the team makes clothes, Yukari (dubbed “Caroline” by the collective) grows closer to the strange fashion students, pushing away her studies and as she’s pulled into the embrace of George.

The thing that drew me into Paradise Kiss when Tokyopop first published it (now handled by Vertical Comics) was its visual aesthetics. Rarely has there been an artist who could craft both some of the most gorgeous and silliest-looking characters around. In one instance, you are awed by the beauty of the clothing and makeup designs on the likes of Yukari and Isabella; the next, you’re laughing at the derpy and goofy faces of the characters as they’re dealing with comical blows. These two styles should clash, but they work so perfectly together.

It also helps that the story goes through so many emotions, be it the comical and the dramatic. From a humorous side, there’s a lot of fun the ParaKiss crew have while making costumes and bantering. With their fourth-wall breaking attitude, they know that this is just a manga, and they’re having a ball making fun of plot tropes that usually occur in both josei and shojo series. After all, with them still being in high school, there’s a hint of immaturity with their attitudes and even their romances.

And yet, when it comes to the dramatical elements of Paradise Kiss, you somewhat forget that these are a bunch of eighteen year-olds still working their way towards their dreams. Miwako & Arashi’s relationship has some rough patches, with the latter lacking the trust that the former wishes he had, especially when it comes to meeting with their childhood friend Hiroyuki. The ups-and-downs in Yukari and George’s relationship demonstrate the issues with possible toxicity, with George’s seemingly unemotional reactions to some of Yukari’s decisions and the like.

Perhaps ahead of its time is the treatment of Isabella, a transgendered woman who acts as the motherly figure in ParaKiss. In a time when even gay and lesbian relationships weren’t quite welcoming, it’s amazing to see a character that’s written so well as Isabella back in 2000. Although Yukari uses some questionable terminology in the beginning to describe her, she is treated both as an equal and with much respect within her collective and even complete strangers. Even two decades later, I have yet to see a transgendered character be presented in such a positive light quite like this (which, to be frank, is both impressive and kind of sad).

Storyline-wise, Paradise Kiss can be somewhat by-the-numbers with its narrative. Quick romances fading quickly, mother/daughter spats, and the occasional lover’s quarrel wasn’t anything new back in 2000. But what helps to make it all better is the way these characters are shaped and blossom all throughout its 850-page story. Yazawa has a knack for creating some memorable people-of-interest, to the point where you’ll sooner see her influence invade other works and the like. There will be hundreds of Gokus, Narutos, and Dekus; there will ever only be one Yukari Hayasaka or George Koizumi.

Two decades later, and Paradise Kiss has aged like the finest wine. Yazawa’s art and story continues to be a shining beacon in the josei genre, with its character development and beautiful costume designs. One hopes that a celebration such as this will reawaken the author’s passion once more, bringing back her unique style and personality to the forefront of manga again.