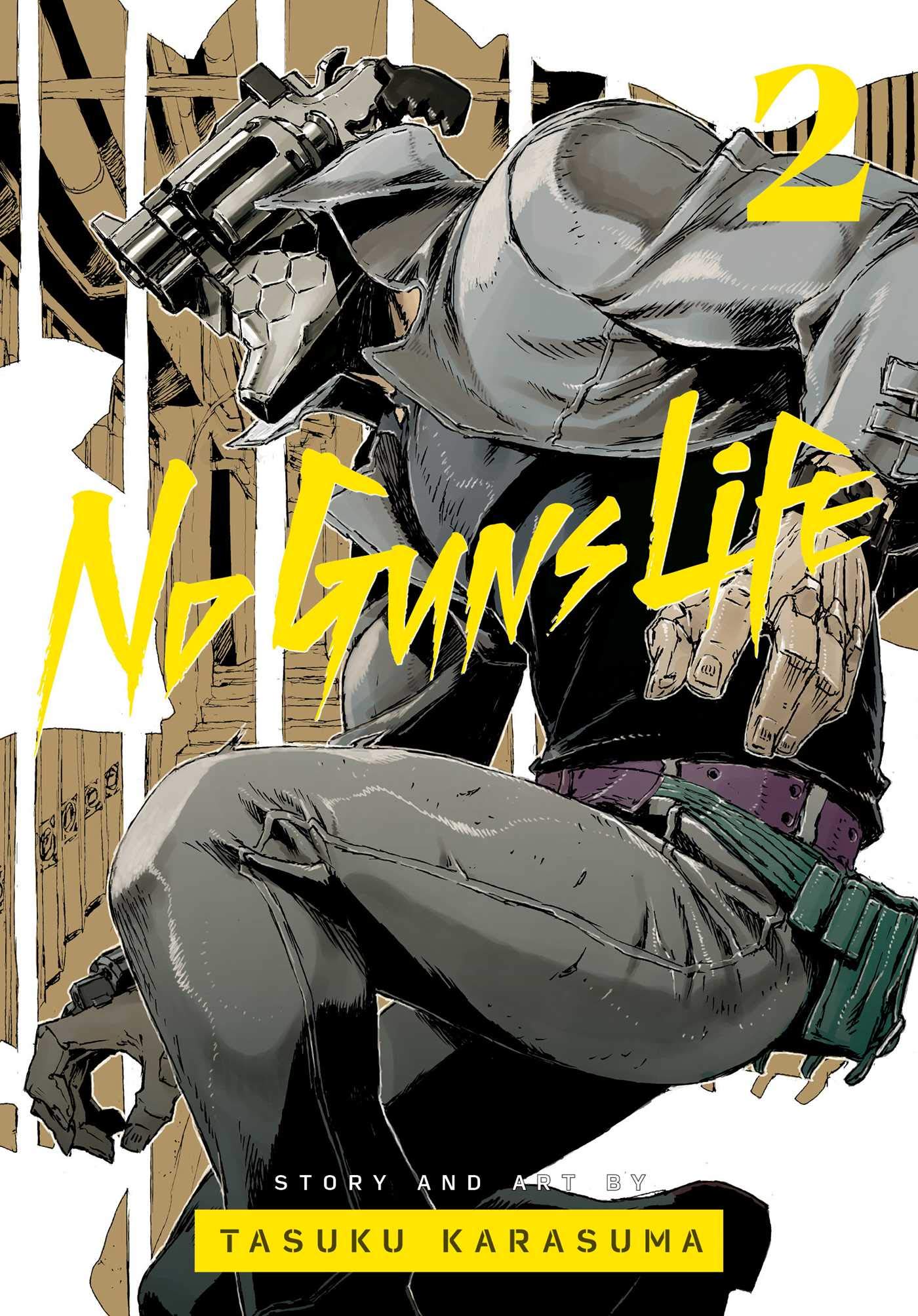 No Guns Life is a story about a guy with a gun for a head. On any other occasion, this should automatically result in nonstop badass fights and 80s-inspired anarchy. Yet in Tasuku Karasuma’s manga, what’s showcased throughout is a plethora of character drama and deep back stories. Volume One gave the writer a chance to introduce us to this strange world, so why does it feel like he’s doing the exact same thing in Volume Two?

Now with Tetsuro by his side, Juzo and Mary find themselves running away from their previous troubles. Of course, the past comes shuffling back into the Extended’s life, as he’s threatened with arrest by the Extended Management Squad. However, an old ally of sorts named Olivia offers Juzo a deal: help capture a dangerous Extended on the loose, and she’ll offer some protection for Tetsuro, Mary, and a couple of other pals who got rung into this trouble. The suspect on the lamb: Hayden Gondry, the very reason why the EMS exists in the first place!

While most of the things about our main characters has been brought out into the open, the second volume of No Guns Life adds a new layer of complicated world-building to an already complex society. Thankfully, the addition of the EMS may very well give Juzo a chance to find some new allies in his battle with Berühren Corportation, whom almost made mince meat out of our anti-hero and Tetsuro. Kronen already looks to be a fun little rival to Juzo’s ways, as his means of dealing with bad guys could contrast with the gun-headed protagonist’s mantra. Then again, they may just enjoy the sport of smack-talking one another too much to make either seem a threat to one another.

When Hayden finally shows his face, that’s where the true meat of the story starts to steam upwards into the reader’s eyes. His powers feel very akin to Doc Ock in Spider-Man, using his crazy limbs to make shish-kebab out of anyone he pleases. It’s when he shows his shapeshifting abilities when Juzo and Kronen truly see how dangerous of a foe he is. Thankfully, not only are we treated to a fantastic two-on-one battle between Juzo & Kronen against Hayden, but it showcases the strengths of Karasuma as an illustrator.

However, there’s a problem within No Guns Life, and it’s how it handles being a slow-burning narrative. Yes, there are many stories in fiction that benefit from being a slow burn, ranging from comics like Sin City and The Maxx to films like Drive and Once Upon a Time in Hollywood. But what stands out from those mediums is the interesting flame that burns during those slower parts. When the action isn’t happening in this particular manga, Karasuma can’t help but sit on his hands, forcing the readers to ponder over what’s going to happen next while the writer does the same.

The second No Guns Life volume has its interesting moments, as well as a great fight sequence towards the end. With that being said, there’s a lack of attention-grabbing dialogue and character development that keeps this manga from being a sharpshooter. No Guns Life may have a pretty flame to look at during its slow burns, but after what’s been brought to us readers two volumes in, that fire has the potential of being put out when one least expects it.