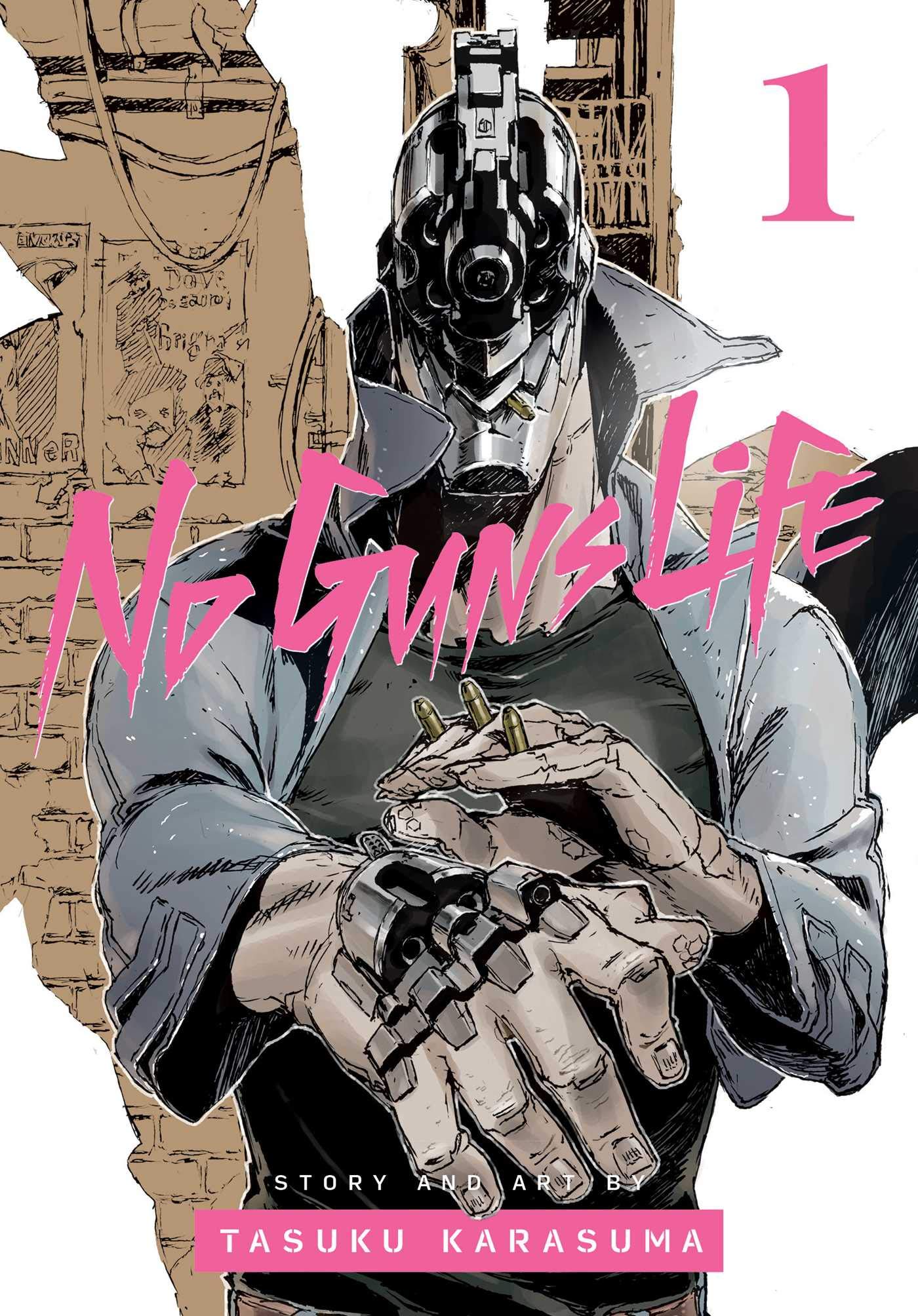 “Somewhere out there, there’s a gun lobbyist getting hot and heavy with a tobacco lobbyist over this.” That’s the PG-rated version of what ran through my brain when I first saw Juzo Inui, the pistol-headed chain-smoking hero of Tasuku Karasuma’s manga series No Guns Life. While I’m not supposed to judge a book by its cover, one can’t help but feel like the wrong kind of people will champion this kind of protagonist. Fortunately, despite some narrative issues, the first volume of No Guns Life starts out with a good bang.

Juzo is a Resolver, a person hired to fix someone else’s problems. Whether it’s babysitting a kid or taking on a gang of powerful foes, Juzo does almost any task for the right price. However, his most recent problem puts him gun head-to-head with the Berühren Corporation, an organization with a knack for creating physical extensions and powerful human weaponry. What’s worse, he’s now having to watch over the possible CEO of Berühren‘s son, who has a special power of his own. 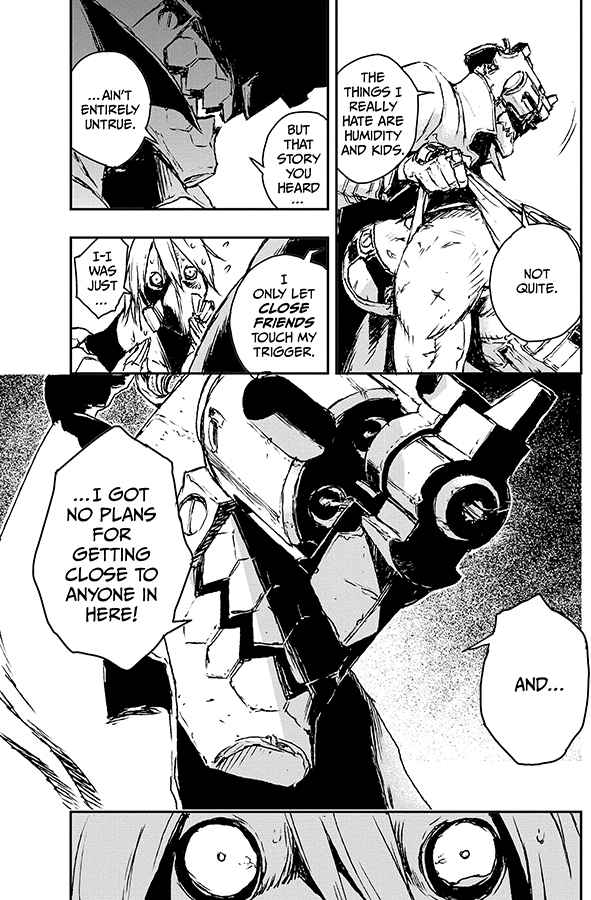 It should first be noted that No Guns Life does a great job with crafting the world it’s based in. Like a mixture of Blade Runner and Heat Guy J, the realm that Juzo roams is filled with dark beauty and bloodstained streets. Just as impressive are the ways all of these characters are designed. Despite my comment in the beginning, the detail placed in the character of Juzo is legit impressive, with his human/weapon combination giving way to some inventive physical traits.

However, I do have a little bit of an issue with its narrative. While I do appreciate a good manga that takes its time with telling a story, this entire first volume drags its feet with the way it opens the world to its readers. What I knew about Juzo and his surroundings by volume’s end is the same amount of info that I gathered from its first chapter. It might not be boring, but unlike the first volume of Bakemonogatari, it made me mad in parts because I didn’t have a solid understanding of what was going on! 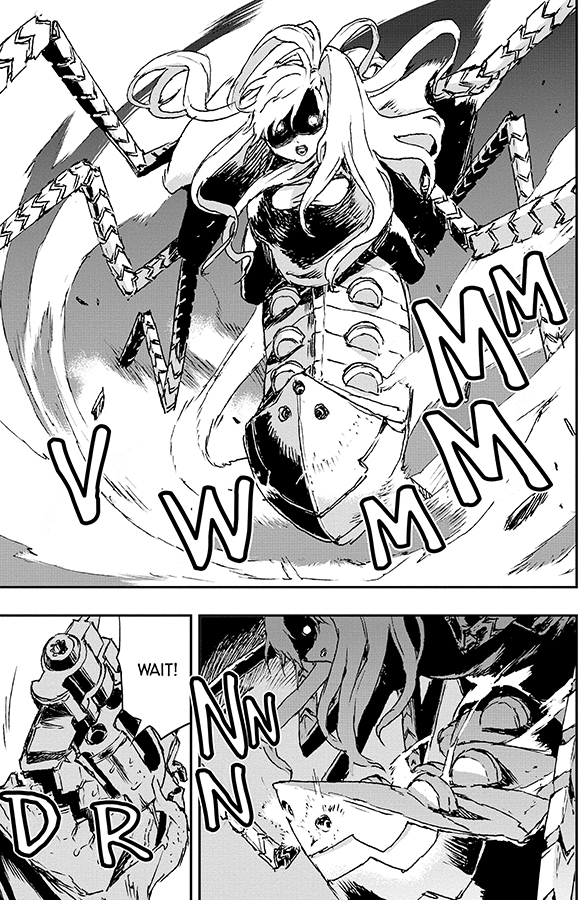 With that being said, watching Juzo in action here in No Guns Life is pretty cool. The amount of power he showcases is what you would imagine someone with a gun for a head would deliver, and he doesn’t disappoint when it’s time to throw down! There are even moments where he has a soft spot, as we see him blush over getting a simple peck on the cheek from a client. But the real highlight is watching Juzo smash an oncoming train to a halt, diving into a battle to save a kid whose has had his tendons cut by the Berühren Corp.

There’s a lot of a room for improvement in No Guns Life, and despite some of the slower aspects of it, there’s a good amount to like about the first volume. (Plus, it appears Madhouse’s anime adaptation that’s currently airing has fixed some of its pacing problems.) One may wonder where Juzo and Tetsuro will go after causing such chaos, but if one gritty town has the potential of delivering some excitement, then odds are the rest of the world of No Guns Life will do just the same. Still, let’s hope it doesn’t take too much of its time revealing all of its setting’s nuts & bolts. 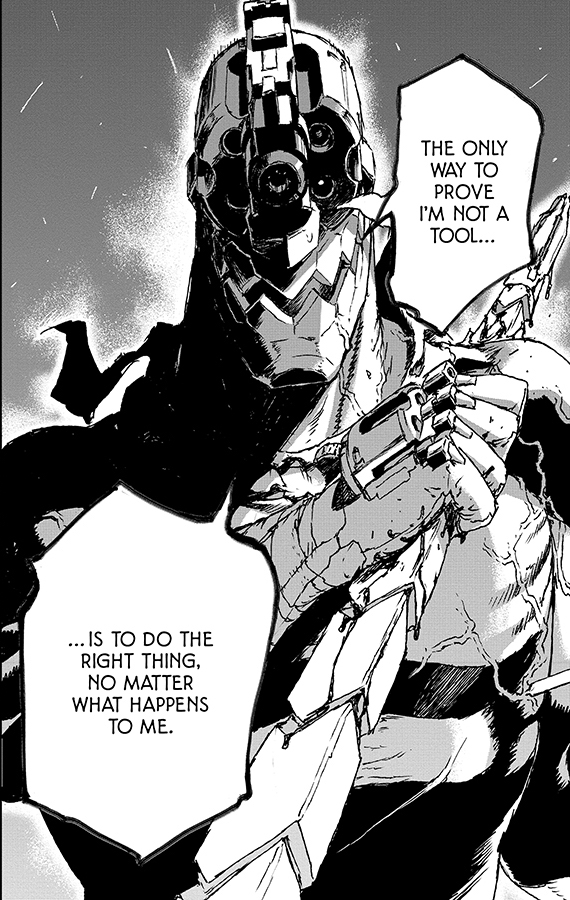