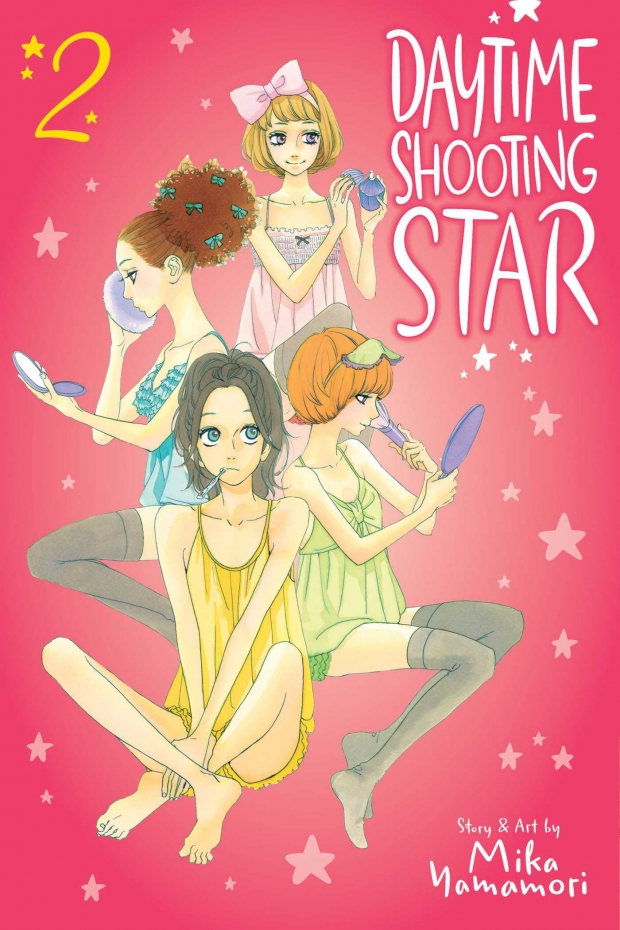 There are times where I wonder what a shojo manga writer has to do to stand out these days. Yes, there are your Ouran High School Host Clubs and your Fruits Baskets that are filled with originality. However I cannot help but find that most shojo series without some sort of fantastical element can often be same-y when comparing it with similar series. Such is the case of Mika Yamamori’s Daytime Shooting Star, whose second volume just can’t seem to break away from certain paint-by-number plot devices.

After finally settling in to her city surroundings, Suzume and her classmates head out to rough it up in the woods. But after she and Mamura get lost in the forest, things start to slowly get awkward between the two of them. Even as she helps him with his shyness around women, there’s a strange feeling that two start having with one another. Adding onto that stress is Suzume falling for her teacher Shishio-san, who sort of makes it clear that he has zero feelings for her in return.

It should be noted that I’m glad to see a teacher character not return feelings for their student, as those are often some rocky waters to tread on. How it’s handled is how it should be in the real world, never drawing from some steamy romance novel that most fan girls eat up like an ice cream buffet. With that being said, how the relationship between Suzume and Mamura is being handled feels a bit rushed. Dare I say, its pacing is a sharp contrast to what we got in the first volume.

Originality-wise, Daytime Shooting Star doesn’t really offer anything new. There are parts that remind me too much of Kimi ni Todoke with its tone and character types, to the point where I find myself switching back and forth mentally between the two series to make sure that there’re plenty of differences that help to make each one stand out. The sad thing is, while Kimi ni Todoke is filled with much heart and unique storytelling, I really can’t say the same about Daytime Shooting Star.

Granted, there are some pretty funny moments in Yamamori’s manga that help it stay afloat. Watching as Suzume and Mamura attempt to find a way out of the woods is filled with many laugh-out-loud moments. I also like how Suzume nonchalantly blurts out Mamura’s secret during a study session, with the flustered boy delivering a good dose of revenge to warp the country girl’s head just tad. With that being said, just because something is funny doesn’t make it clever, a problem that this manga just can’t seem to shake off at this moment.

The second volume of Daytime Shooting Star may have some good humor to dish out, but it just can’t seem to pull itself away from common shojo tropes. While I do appreciate what Yamamori is attempting to convey with her story and characters, the truth of the matter is I’ve seen these aspects in far too many manga in the past. It has potential of becoming a very good series, but as of now Daytime Shooting Star is just slightly above average at best.