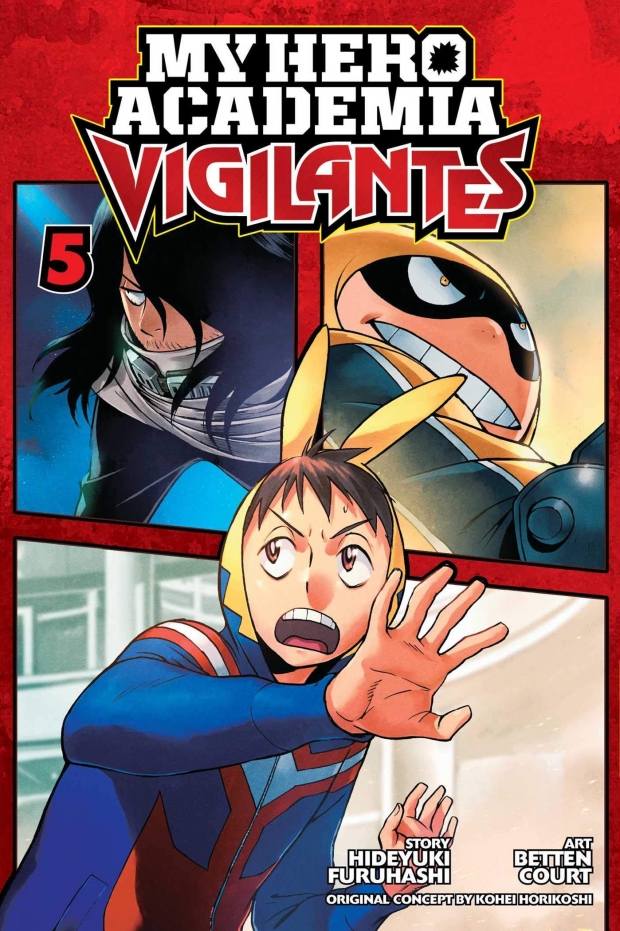 Within Kohei Horikoshi’s My Hero Academia is the opportunity to shine a light on the unsung men & women of justice. Hideyuki Furuhashi has kept to the spirit of Deku & All Might’s mantras with his take on the unlicensed heroes in My Hero Academia: Vigilantes. In the last volume, it seemed a chapter in this interesting take had come to a close. So where does Furuhashi go next?

The answer to that question lies right at the get-go, as it appears Knuckleduster is taking a break from roaming the streets and beating bad guys. This leaves “The Crawler” Koichi and Pop Step to go forth without his aid, thereby placing an opportunity for them to grow on their own. As a result, Koichi finds a new use for his powers, whereas Pop Step’s popularity starts to grow both in-person and online. However, villains never sleep, especially those deep in the drug ring, resulting in an idol competition trip to Osaka transforming into another citizen-saving spectacle.

Some may be taken aback by the tone in this volume of Vigilantes. With Knuckleduster MIA, the grittiness he brought to this spinoff kind of vanishes. As a result, these semi-adventures with Pop Step and Koichi take a more light-hearted route with its storytelling. From the naughty villains stealing panties & going commando to the behind-the-scenes antics at another public idol show, Furuhashi instead goes for crafting smiles on his readers faces instead of grimaces. (Considering what Knuckleduster had to do last volume, I can’t say I blame him for going this route.)

It’s also nice seeing some of the main My Hero Academia crew interact in this world. Although Eraser Head and Midnight act somewhat like background characters, it’s great seeing a relatively unknown like Fat Gum getting some love in the forefront. The team-up with newcomer Monika Kaniyashiki during a drug bust leads to some exciting moments crafted by artist Betten Court, with Monika’s claw-inspired powers delivering a spectacle that’s both humorous and entertaining. Despite Koichi and Pop Step acting more like backup in this situation, the team-up these pairs manage to create is something I hope to see more of in future volumes.

Volume Five of My Hero Academia: Vigilantes may step back on the physical threats of this superhero world, but it does a wonderful job with evolving the characters of Pop Step and Koichi. While Knuckleduster seems to be taking a break from being a hero, it gives the younger generation a chance to grow without his aid. Although one can’t guess where the paths of these three unlicensed heroes will go from here on out, but considering how well Furuhashi has done with keeping true to Horikoshi’s original vision, it’s bound to find a way to wow its readers in the most unexpected way! (Note to Studio Bones: give these guys some animated love in the fourth season of My Hero Academia!)