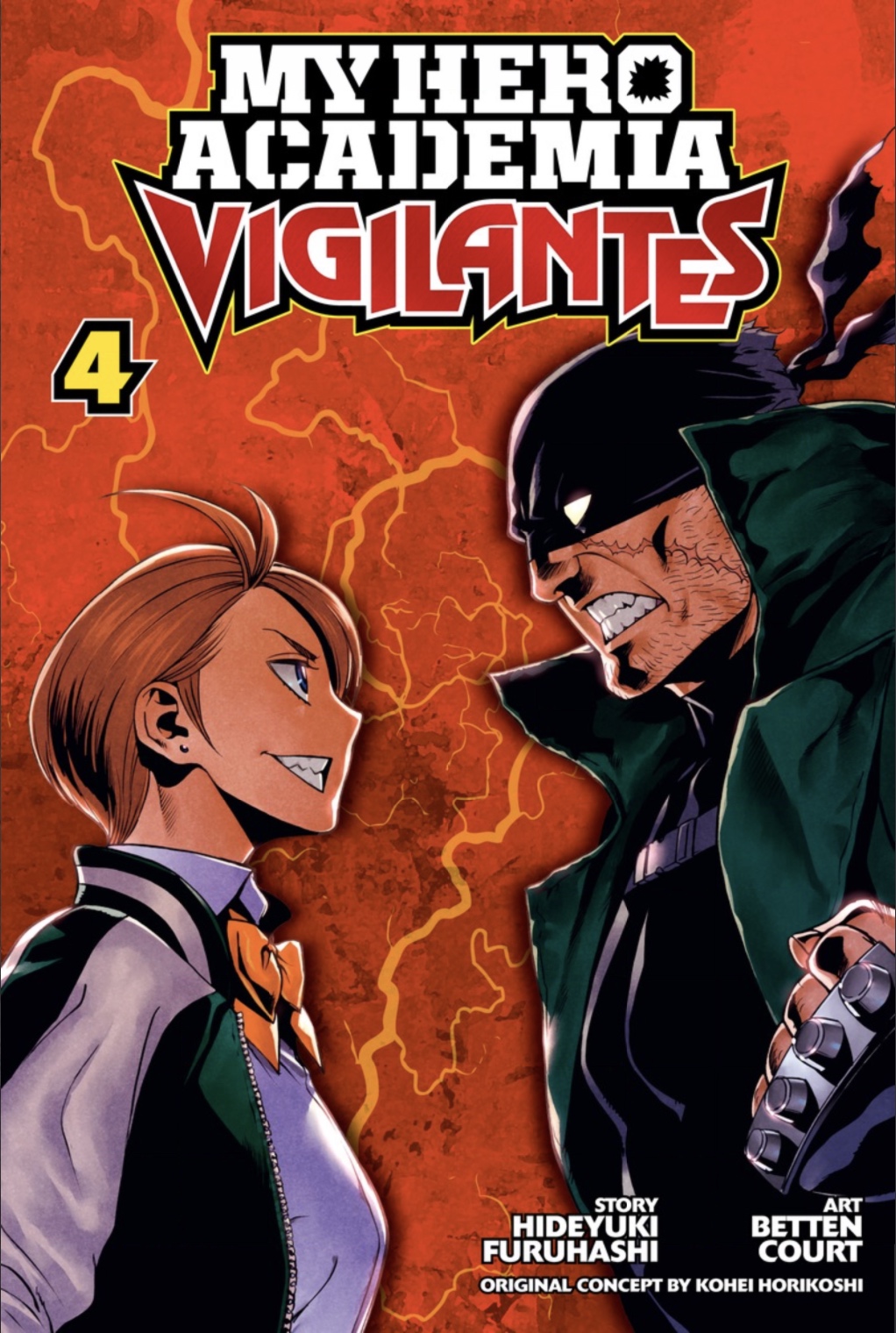 Consider it a good thing when other writers come in to aid with a main series' spinoff. Imagine the lack of sleep Kohei Horikoshi would have if it was only his hand that wrote & drew the entirety of My Hero Academia's lore. New blood in the mixture can often lead to unique looks into a popular world, which is what Hideyuki Furuhashi and Betten Court have done with their street-leveled take on Horikoshi's creation in My Hero Academia: Vigilantes. But with its fourth volume, Furuhashi & Court have managed to bring forth something that just about stands toe-to-toe with Deku's story.

Returning into the spotlight after staying nearly quiet in Volume Three, Hachisuka continues her trend of distributing the Trigger drug to wannabe villains throughout town. However, with Knuckleduster close on her trail, her psychotic ways may soon place her into a corner she can't get out of. Meanwhile Pop Step gets the opportunity to perform a store opening, with a crew of dancers, idols, and musicians aiding with the task at hand. But as luck will have it, Hachisuka tries to put a stop to any sort of fun that may come out of such an event.

What makes this latest volume of Vigilantes stand out is the way it frames Hachisuka. While she may not be the be-all-to-end-all baddie of this spinoff, Furuhashi does a tremendous job with demonstrating her threat levels. Court's art style brings her mannerisms to incredibly creepy heights, with the sight of her bees flying out from under her skirt(!) reaching Junji Ito levels of disturbing. As she faces off against Knuckleduster, her talents are presented with a lack of consideration for those around her. 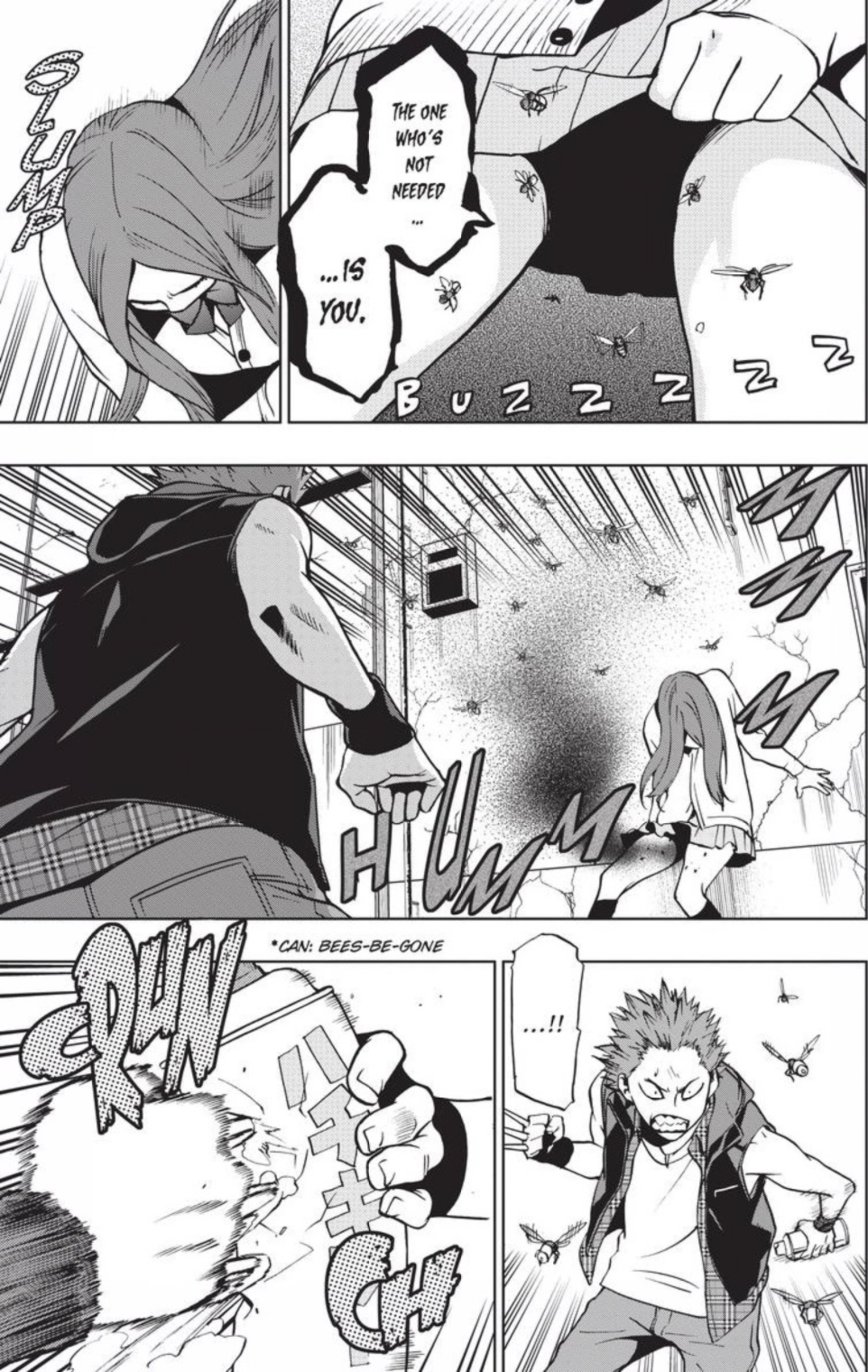 But it's this battle where we find out a plethora about Hachisuka, including her connection with Knuckleduster. She isn't just some cookie-cutter bad guy; she's been wrapped in a situation that any teenager may be peer-pressured into. Although it's presented into a more fantastical light, Hachisuka's story mirrors real-life tales of drug peddlers and dealers, with many of them getting into these illegal dealings due to the higher-ups in the chain tricking them into thinking they've found "their place." Even as the volume ends, you don't get a clear reveal of what happens to Hachisuka after she deals with Knuckleduster (though we should hopefully find this out in the next chapter).

This volume also showcases the burden that Knuckleduster has on his shoulders, as he cares for his sick wife and looks for his daughter Tamao. What began as a character similar to Marv from Frank Miller's Sin City evolves more into a middle-classed Bruce Wayne, with a mere human using his super strength to take on the evil that roams the world. He's not a mere curmudgeon wanting to just punch things; he's a family man wanting what's best for those he loves most. As such, it makes the battle between him and Hachisuka all the more heartbreaking when both of their cards are fully revealed.

Sadly, this leads to Pop Step's storyline in this volume. While it does entertain, it doesn't quite mesh well with the Knuckleduster/Hachisuka fight. Yes, it's pretty funny seeing her wail on The Crawler when he's trying to support her moment of possible stardom, but it just devolves her from the full-figured character she had become back to being something of a one-note joke. Even though the storyline ends with a nice lesson on overcoming certain high expectations, it doesn't quite measure up as strongly as the main battle that's going on. 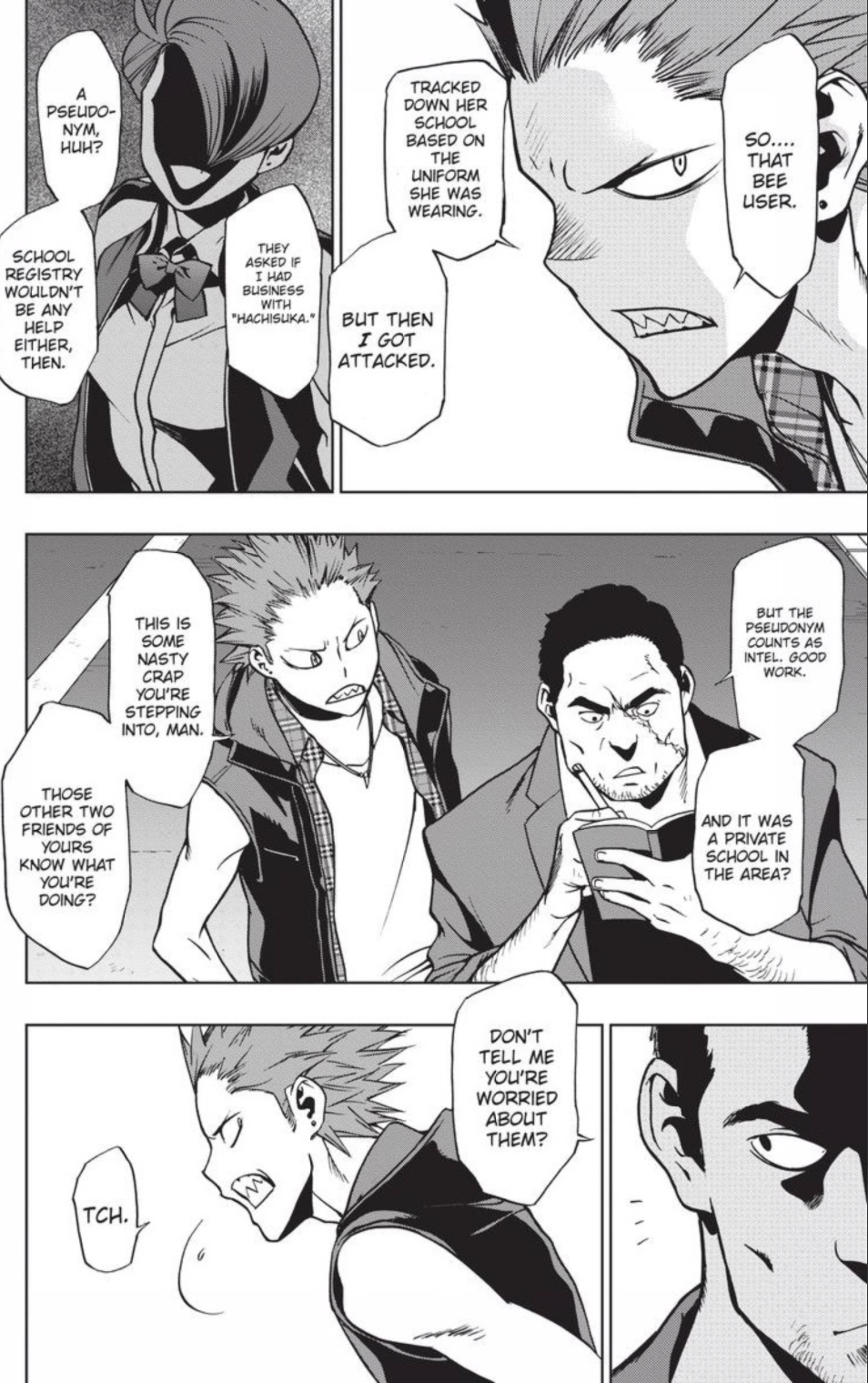 My Hero Academia: Vigilantes delivers a very satisfying climax to Hachisuka's storyline, leading one to wonder what other evils may be afoot in this spinoff. Although the Pop Star storyline felt tacked on for the most part, most of what Furuhashi and Court present in the fourth volume is wonderfully entertaining. One can hope that Vigilantes gets some love from Studio Bones in the not-so-distant-future, as these characters have proven that they can potentially shine as brightly as All Might's smile if given the proper chance.