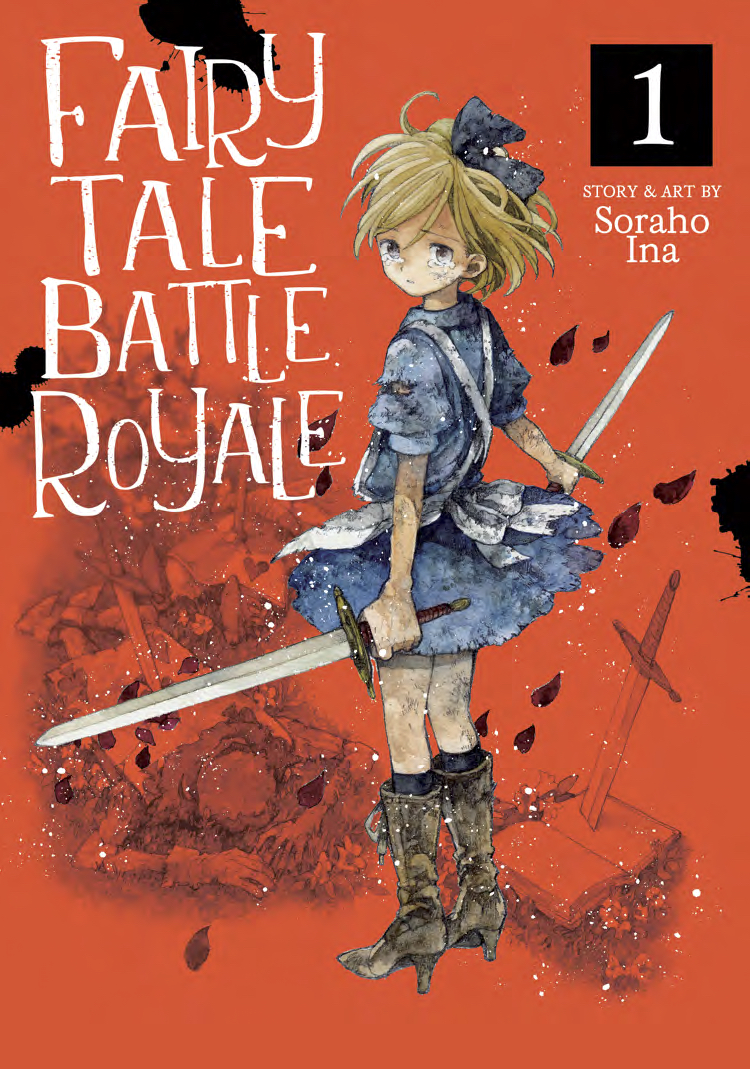 When thinking of how Japan has recently adapted fairy tales, I often find myself looking unfavorably at this past winter's Maerchen Maedchen. Terrible animation aside, the way it paired modern schoolgirls with certain fairy tale characters had some potential that never really off the ground. Soraho Ino's Fairy Tale Battle Royale, on the other hand, seems to be starting things off on the right foot, specifically one that's bouncing for some action!

Fairy Tale Battle Royale places its focus on Aoba, a bullied high schooler who is in love with fairy tales. After a very rough day in class, where bullies go so far as to destroy her own manuscript, she finds a contract that will grant her a wish. After signing it and wishing to be friends with everyone, all of her school troubles vanish as the bullies apologize with tears in their eyes. However, a new problem arises when she's pulled into the world of fairy tales, as she is greeted by a rotting Alice. 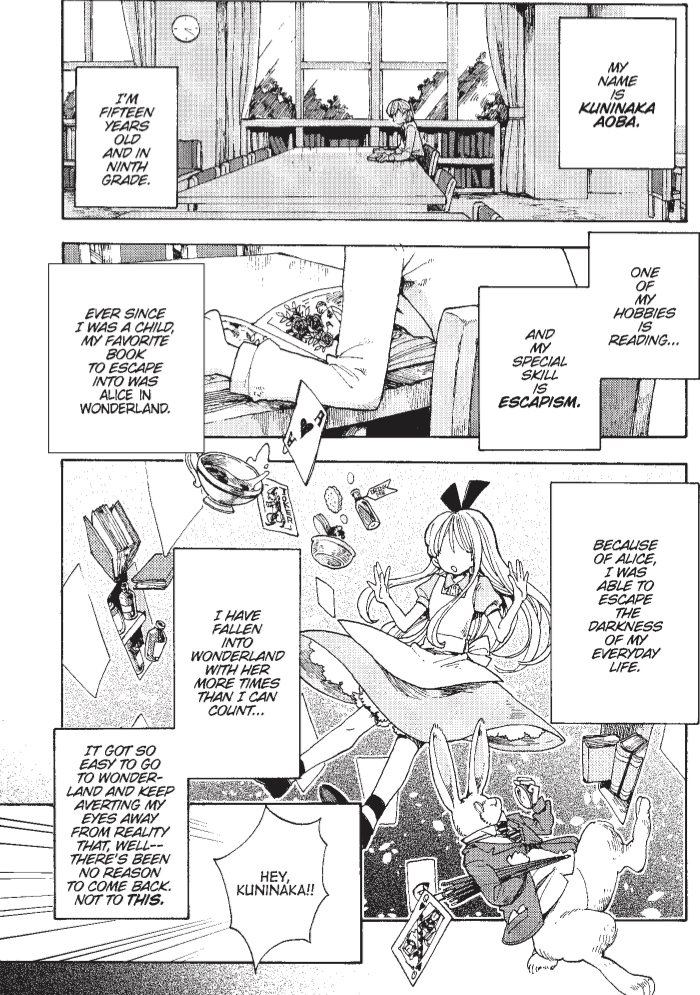 Soon after discovering that she's taking the place of the protagonist of Alice in Wonderland, she meets a boy named Noah that also signed the contract. Quickly they realize that the rotting characters of fairy tale past are out to get them, as they run and evade their grasp as best as they can. It's a fight for survival in this dark reimagining of these classic stories, as Aoba attempts to find the hows and whys of the new world she's in. (Not to mention, she also has to get used to being the popular kid in her high school.)

I know that "dark, gritty" takes on fairy tales have been done to death, from Tim Burton's version of Alice in Wonderland to that Hansel & Gretel movie where they play witch hunters. (Terry Gilliam's version of The Brothers Grimm and the classic musical Into the Woods continue to be my faves, FYI.) What Ino has done here is place what appears to be a sort of Magical Girl Raising Project twist on the whole situation. While it doesn't appear to have the chosen characters killing off one other (well, at least for now), there is a dark underlying feeling I get while I'm reading this first volume. 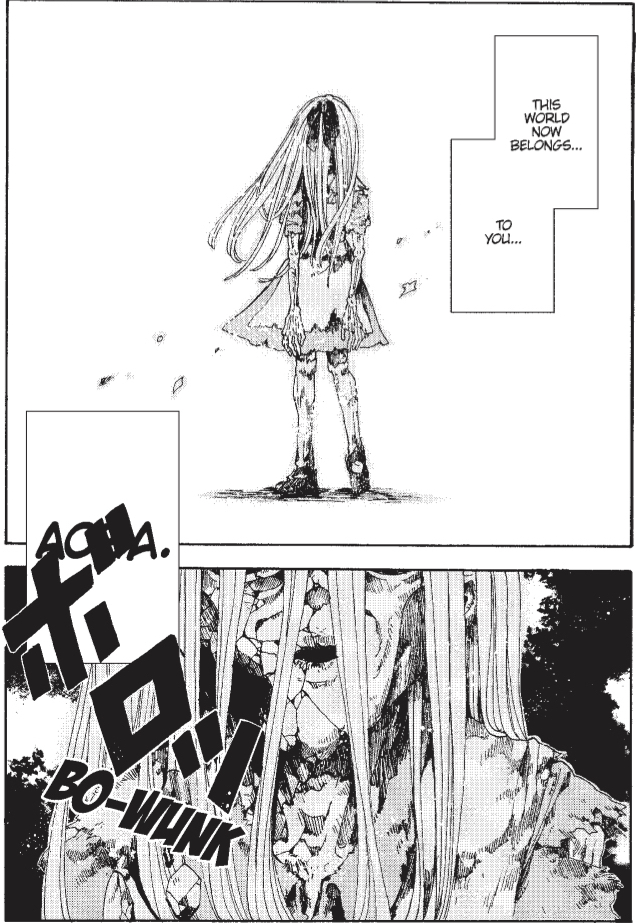 Although the action hasn't quite kicked off yet, the troubles Aoba and Noah get into are pretty perilous. It also helps that they're thrown in many a creepy situation with the rotting corpses of these classic characters out to get them. We know that they'll be given weapons sometime soon, but how they'll wield them is still as of yet unknown. With that being said, watching who appeared to be Little Red Riding Hood blasting away some zombies with a shotgun was pretty badass! (I also loved how the worlds slowly come back to their more majestic selves as soon as the enemies were dealt with.)

It's nice to know that Fairy Tale Battle Royale gives the characters a chance to return to the real world, as well. Here you get to see Aoba and Noah deal with their real-life situations, especially with the latter apparently a big deal in the music world. However, one cannot help but think that something is bound to make the worlds of reality and fantasy clash, what with Aoba seeing what appears to be one of the rotting characters invading her school's gardens. Needless to say, there are many layers of this story that are due to be revealed as this tale progresses, which -- fortunately -- is bound to keep many readers on their toes. 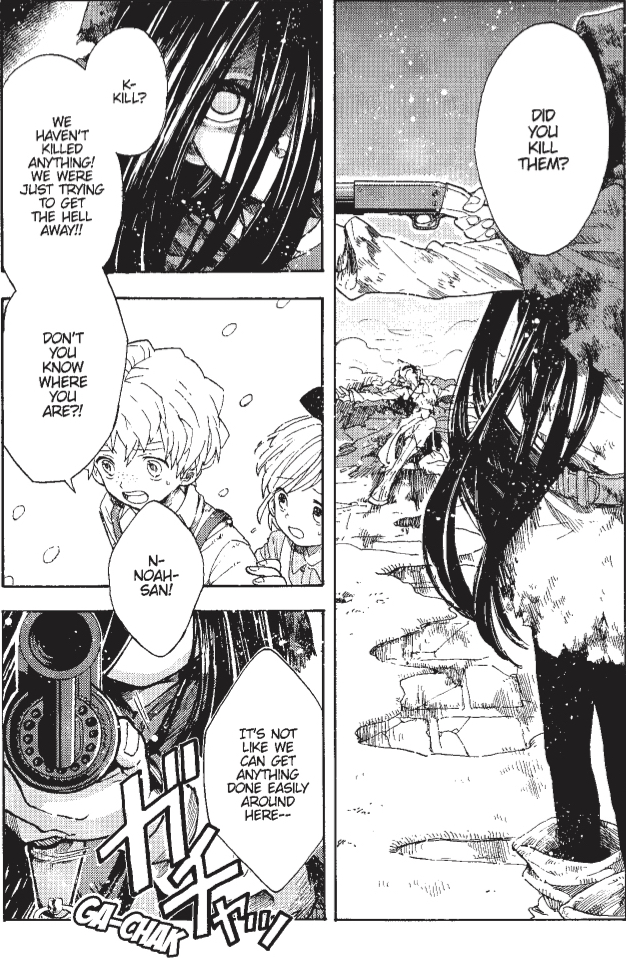 Ino's art style should also be commended. There's a terrific blend of the beautiful characters interacting with the dark and decomposing backdrops they're placed in. As Aoba and Noah are presented with a sweeter visual aesthetic, the mysterious hooded girl has a look that makes it appear that she's experienced one too many terrors to go back to normal. How the enemies decompose is also wonderfully detailed, as teeth and bones pop off with a tint of creepy in every panel they appear in.

Thus far, Fairy Tale Battle Royale is itching to be a good read. With its fair share of likable characters and a twist on the tales & fables of old done so with care (albeit not in an original way), Ino's story brings together a plot filled with enough magic, mystery, and despair that will have readers coming back for more. Dare I say, it actually helped to rid the bad taste that Maerchen Maedchen had left in my mouth many months ago. In short, Fairy Tale Battle Royale will have you wanting to dive into its rabbit hole, though it's best to do so with care and caution.