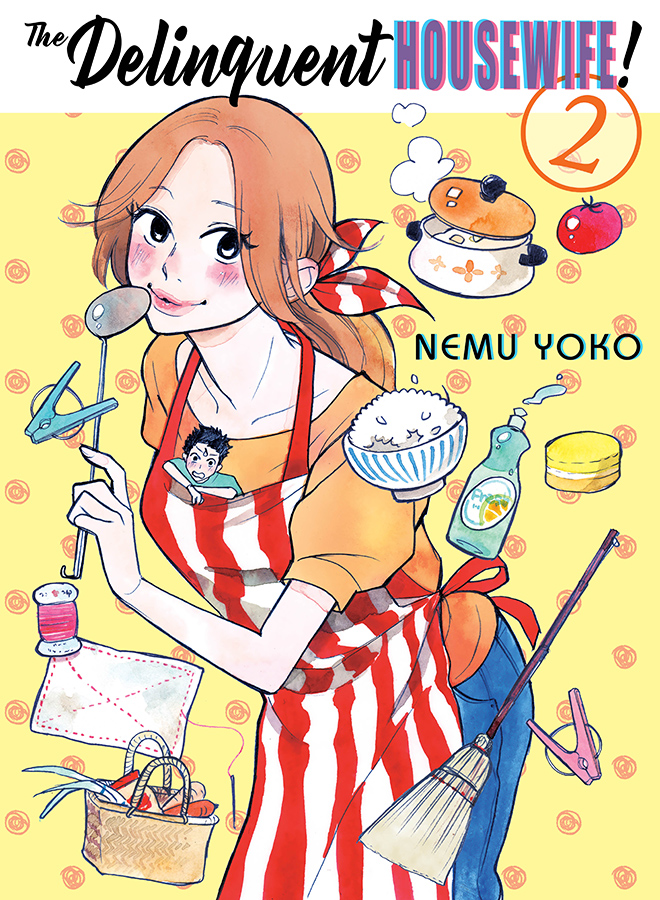 I'll admit that Nemu Yoko's The Delinquent Housewife! had a subpar introduction, what with the way it presented its characters and hidden backstories. Sometimes it takes a bit for a plot to truly get going, even if its main focal points are of a likable sort. Thankfully, the issues I had with The Delinquent Housewife!'s first volume seem to be ironed out in its sophomore release, albeit with an overdone trope or two thrown in.

Komugi finds herself in hot water when her mother-in-law discovers her biker jacket, but with some quick thinking from Dai, she avoids being kicked out of the house. After starting a new job and getting better at housework, Komugi no longer feels like a burden in the household. However, things get rather complicated for Dai when he starts having dreams of Komugi, as feelings of smitten guilt rile up inside. If that wasn't enough, Dai's classmate Yoshino hides her feelings for him, as her emotions are on the verge of imploding.

There are a few aspects that keep this volume of The Delinquent Housewife! afloat. For one, we learn about why Komugi's mother-in-law has a distaste for biker girls, and it's presented in a way that's actually a lot more original (and disheartening) than most other series have done in the past. Another reason the second volume stands out is how Komugi focuses on changing for the better. You can tell she's working hard to redeem herself for her punk-ish background, be it taking a job, learning to cook & clean properly, and -- in one surprisingly exciting segment -- bringing a badminton racket over to her reluctant sister-in-law.

The big reason for this latest chapter in Yoko's manga outshining the first one is how it showcases complicated feelings. Yes, Dai should be scorned for starting to fall for Komugi, but with his brother far away and the two in-law siblings hanging out more often, one can't blame him for starting to feel like this around her. Adding in the feelings Yoshino has for Dai also brings forth some good chemistry from the characters, even if this mixture is bound to result in a not-very-good explosion of broken hearts and awkward conversations.

It also helps that there's a good amount of humor sprinkled throughout this chapter, from how Yamai has a horndog personality around Komugi to a friendly video game match transforming into realm of angry sore loses. The appearance of Komugi's new boss at work automatically brings forth some snicker-inducing moments, with her acting more like a yakuza kingpin than a sweet old lady working a mom & pop shop. Only once does the humor seemingly falter, and that's during the camp segments at the end, which don't add enough original jokes to make the comedic aspects shine. (Though, to be fair, Laid-Back Camp has become the standard for this kind of comedy, so it's got heavy competition.) Then again, it's those last couple of chapters where the dramatic elements seem to shine better, so it's a decent trade-off.

While The Delinquent Housewife! got off to a rocky start, its second volume is where its spirit is finally showcased. Although the added aspect of Dai crushing over his sister-in-law has been done in manga many times over, its sweeter and understandable presentation makes it one of the more entertaining variations of the trope. Here's hoping The Delinquent Housewife! continues on an upward path with its storytelling, especially now that another girl is rightfully attempting to wedge in-between the two protagonists.