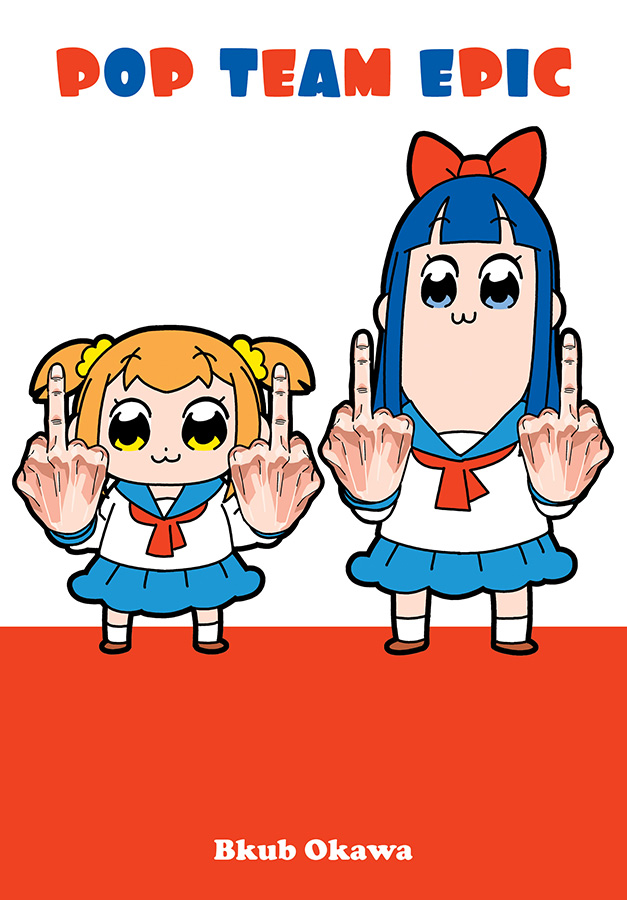 Once upon a time, there was a young fair maiden named Himeko. The daughter of a nobleman, she was to be betrothed to the king's only male heir, which would make her the princess of all who stood in her shadows. Himeko, as it were, carried no love for the prince, not for the fact that he was half-lizardman and had a bad case of penile warts. Nay, for she could not love the prince because all he would ever speak of was Pop Team Epic.

"But it's so funny!" decried the prince in his hissy Tom Waits-like voice.

"I didn't laugh once while reading it," replied Himeko, with an elegance similar to that of alternative folk singer Neko Case.

"That's the point!" yelled the prince. "It's anti-humor! The joke is trying to find the joke that doesn't actually exist!"

"So they pay this Bkub Okawa guy a trash load of money to tell not-jokes?" inquired Himeko.

"Exactly! Now you're getting it," said the prince, smiling like a crocodile who's lost half of his teeth to a crystal meth addiction.

Himeko sighed as she rolled her eyes. She looked at the cover of the manga with Popuko and Pipimi flipping off their readers with realistic hands. Skimming through the pages, she studied every single panel and frame of Pop Team Epic, trying her best to fully understand what made it, well, special to the prince. Pork cutlet bowls, New Year's dreams, nickname-giving, and even an appearance from the legendary Hellshake Yano. The randomness of Okawa's creation was lost upon poor Himeko's mentality. Well, to be fair, it would be lost on anyone with a fairly healthy brain.

"This is dumb," said Himeko, throwing the manga volume across her gold-colored room before plopping on her silk bed. She closed her eyes, as she tried to drift off into sleep.

But before she went into dreamland, there came a knock on her windowsill. Slowly, she walked towards up, thinking it may be some random neighbor's kid being a nuisance. It was here where she came face-to-face with what appeared to be a sock puppet.

"Hello there," said the sock puppet. "I was wondering if you could read my comic. I'm giving it out to some random folks to see if it's any good."

With his scrawny arms, the sock puppet handed Himeko a portfolio of four-paneled comics. Quickly, the puppet ran off to the next place, as if he was a nervous Girl Scout trying to sell cookies for the first time. The fair maiden looked at the front of the portfolio, and proceeded to raise an eyebrow from sheer confusion.

"What in the blazes is a FlorkOfCows?" uttered Himeko, as she opened the portfolio and began reading.

And for the first time in what seemed like ages, the sound of laughter came rushing out of Himeko's lungs. Stories about Tiny Wife, death by snails, Count Shaqula, and even gags referencing the likes of Goblin Slayer and JoJo's Bizarre Adventure had turned the maiden's face red from the amount of giggling she was doing. This FlorkOfCows was random like Pop Team Epic, but it also something else: actually funny.

Even more surprising were the more emotional comics, especially one that involved a clone named Charlie on a quest for a taco (or "tago," as he humorously called them). What started as an excuse for random clone juice gags became a sad, harrowing tale of a brother coming to terms with the loss of a sibling. As she read this story, a mixture of tears filled with laughter and sadness meshed together, creating a rainbow of emotions that glistened off of her cheek. It was a feeling she never had experienced before in her life, and it made her glad that such an emotion rushed her very spirit.

Himeko knew what she had to do. Quickly, she rushed over to the king's castle, where the prince stood by its front gates. There, she handed the prince the portfolio.

"What's this here then?" asked the confused prince, whose tongue was sticking out like some Snapchat girl impersonating an ahegao look.

"Just read this," said Himeko, with smile as bright as the moon.

As the prince opened up the portfolio, a gravelly chuckle began to bellow out of his belly.

"Ha ha!" laughed the prince. "I relate to this man with the elf on his bed! And this doctor gulping the blood of a man who solely consumes energy drinks and rain water? Why, this is hilarious! Oh my lord, and these Caesar comics where he's trying to destroy all things anime? This is just pure genius! Much, much better than that Pop Team Epic series I was trying to get you to read."

Just then, a beam of light came shooting down from the heavens upon the prince. Glowing with all the powers of the stars, the prince began to change shape, ridding him of his lizard-like appearances and looking far more like one of the members of BTS. (Editor's note: we're assuming this is what women are looking for when it comes to guy crushes these days.) Himeko was astonished by the prince's new appearance, rendering her speechless.

"The curse!" shouted the prince, now sounding like Ryan Gosling in his Anne of Avonlea days. "I have been cured! Well, still got them penile warts, but the royal shaman can probably fix that."

Happy as a clam, Himeko embraced the prince, planting many a kiss on his smooth cheeks. In mere days, the couple was wed, with a ceremony filled with as much joy and laughter as the comics that made the now-princess smile for the first time in awhile.

"Well isn't this a wonderful turn of events," uttered a familiar voice. Himeko turned around, and was face-to-face with the sock puppet who gave her the comics to begin with.

"Thank you," said Himeko with a heartfelt smile. "Your stories are truly wonderful. I hope they bring you much success in the future."

"You're very welcome," responded the sock puppet. "I shall take my leave, and embark on a quest to bring more laughter and happiness throughout the lands. May our paths cross some day once more."

"I shall hope so as well," nodded Himeko. "Blessings upon your journey."

As the sock puppet walked away, he began singing a funny rendition of that love theme from Titanic. The day wore on, bringing forth a night of dancing and cavorting. It was a ceremony and party that would be talked about for ages. And it was all thanks to the mind and funny bone of one creative sock puppet.

Himeko and the prince would live on happily...for about seven years until divorcing due to irreconcilable differences. And those penile warts never cleared up, which made their bedroom situation far more frustrating than it should've been. But hey, at least they discovered a funny comic, right? This leads us to the moral of this story: Pop Team Epic sucks; read FlorkOfCows instead.