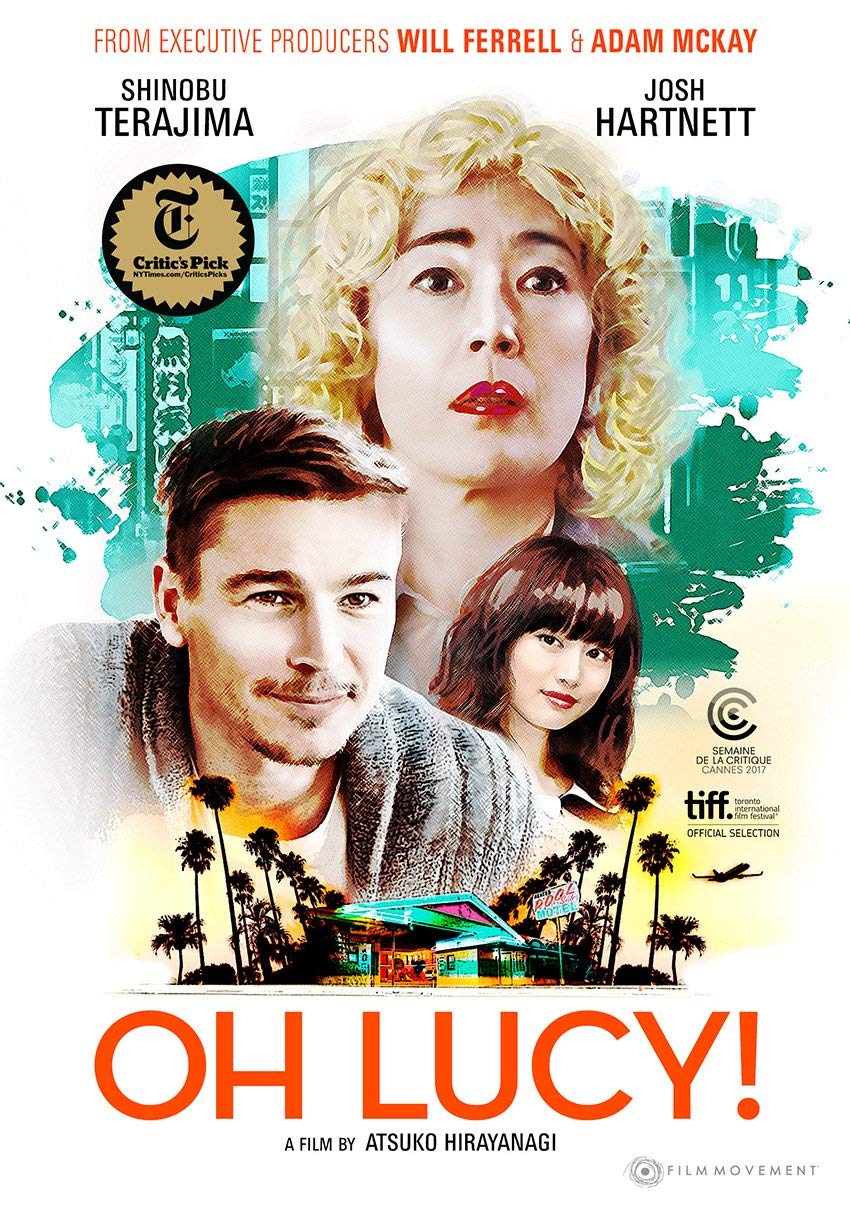 Even a single meet-up can unlock an obsession within a person. Whether it's a chance at love or a breaking from the chains of normalcy, a person can awaken a new focus on life towards better pastures. Unfortunately for Setsuko (Shinobu Terajima), the pastures of her obsession are revealed to be far more brown than green in Atsuko Hirayanagi's directorial debut Oh Lucy!

An expansion of the original short film, Oh Lucy! places its focus on Setsuko, a 40-something office worker who's convinced by her niece Mika (Shioli Kutsuna) to take her English classes in her stead. The teacher, an American named John (Josh Hartnett), takes an unconventional approach to his methods, going so far as to have Setsuko don a blonde wig and dubbing her "Lucy" during their first session. However, it's soon discovered that Mika is running away with John to America, with Setsuko now ¥400,000 in debt and losing her motivation to take the classes. It's when he and her sister/Mika's mother Ayako (Kaho Minami) decide to tread to California to seek the two out, opening their eyes to both the real-life problems of John and the issues they have as a family. 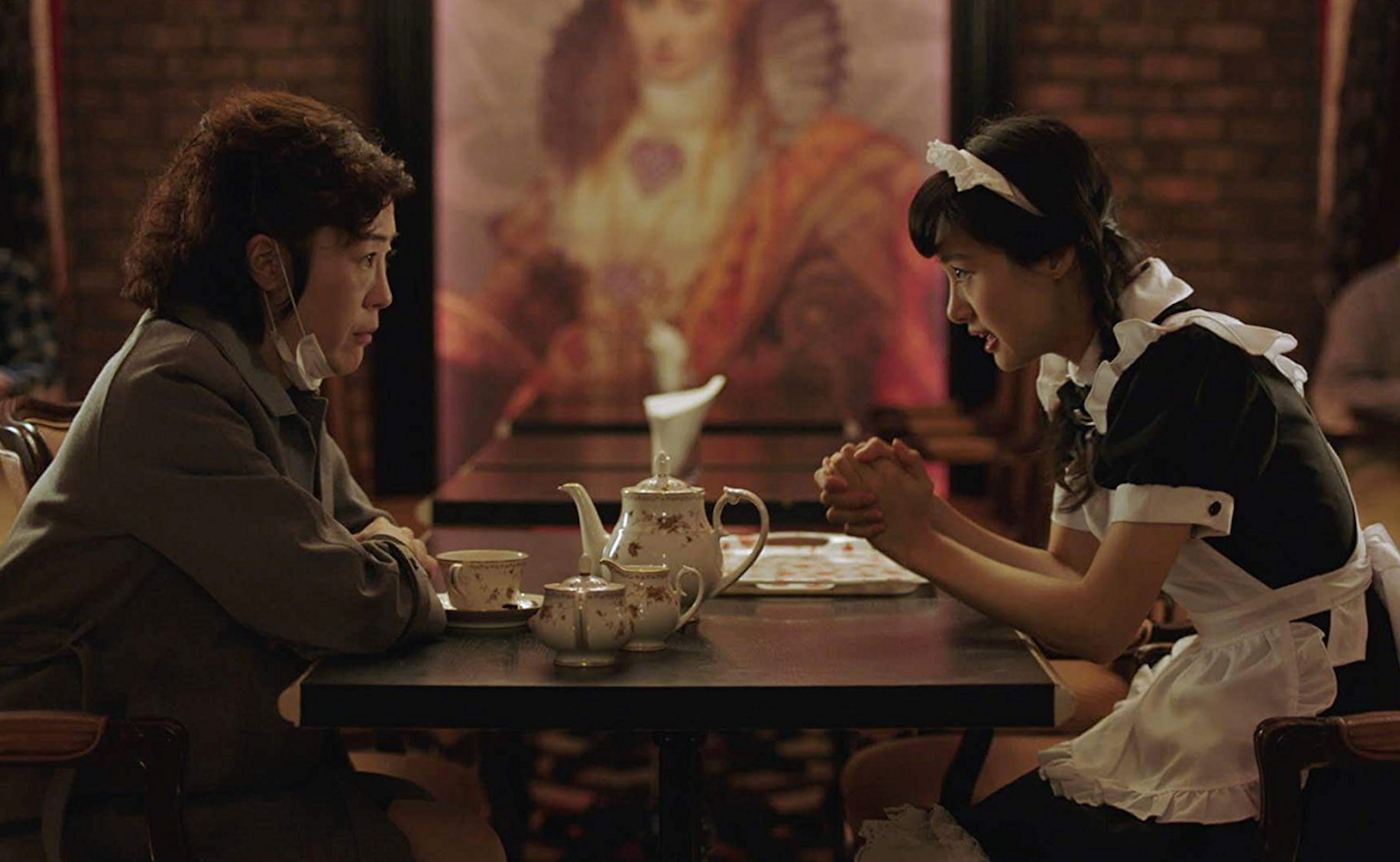 The film starts off on a bit of a slow pace, as we are introduced to Setsuko and the world around her. It's quickly apparent that she feels out of place, especially at her workplace with her coworkers falsely wearing happy faces. It's seeing John for the first time when something awakens inside her being, giving way to a meaning that her life was lacking. However, it's traveling to Southern California with Ayako that has Setsuko slowly realizing the big mistakes she's partaking in. Although she gets to experience things a woman greatly needs in life, it comes both with a spiritual and financial price.

Terajima's portrayal of Setsuko/Lucy is one filled with many issues, and I mean that in a very positive way. Her character is deeply damaged, and it shows when she's either going off on a retired employee at her farewell party or when going face-to-face with Mika. She doesn't lash out like this because she's a bad person; her life has just been one train wreck after another (with the film literally opening up with one), and her self-control and means of keeping her thoughts in have run out. While Minami's Ayako takes a more cautious route, Terajima instead chucks that caution off a cliff and takes whatever life throws her way, even if it results in a regrettable end game. 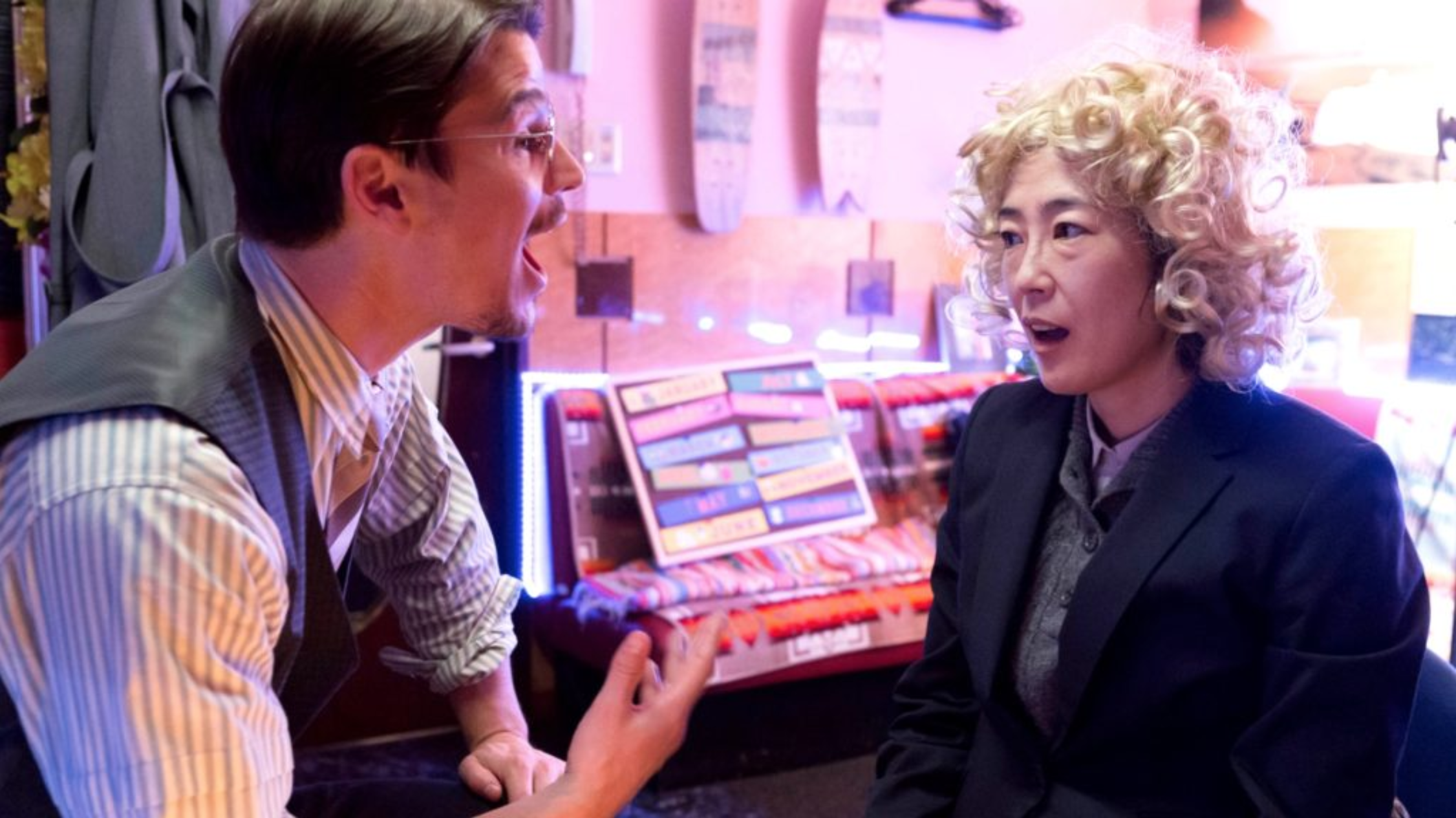 Meanwhile, Hartnett delivers a solid two-faced performance as John, and not in a good/evil sort of way. Instead, his character is filled with the flaws of humanity wrapped into one person. You can tell that he's trying to do something great with his life, but it's the problems in his past that have yet to be solved that keep him from achieving the golden path. Because of this, the dynamic he and Terajima have demonstrates how one's inner animalistic necessities can bring about one's true nature in life.

One of Oh Lucy!'s greatest strengths is its means of demonstrating the culture differences between Japan and America. Even as Setsuko takes her first (and only) English lesson with John, both their body and vocal behaviors are drastically opposite, with John's more openness when he talks going against Setsuko's more stoic behavior. (A fantastic interview on the Blu-Ray with director/co-writer Hirayanagi points this out well, especially when it comes to the cultures' different ways of emoting while acting.) It gives the audience a chance to see why it can be tough to bridge two different worlds, especially when these two characters clash during the story's climax.

Oh Lucy! can a peculiar film at times, taking a very dry approach with its humor and forces it upon some unfortunate individuals. Whether or not Setsuko deserves the brunt of this bad luck depends on whether or not viewers see her as a good person or someone with their own bad temptations they need fulfilling. Nevertheless, Hirayangai's full-length debut serves as a good taste of what one can expect from her take on the character drama. With enough time, she can grow to be one of the best in her genre, but for now, consider Oh Lucy! as a pretty good comedic drama whose narrative road has a far better amount of sleekness than bumps along its journey.