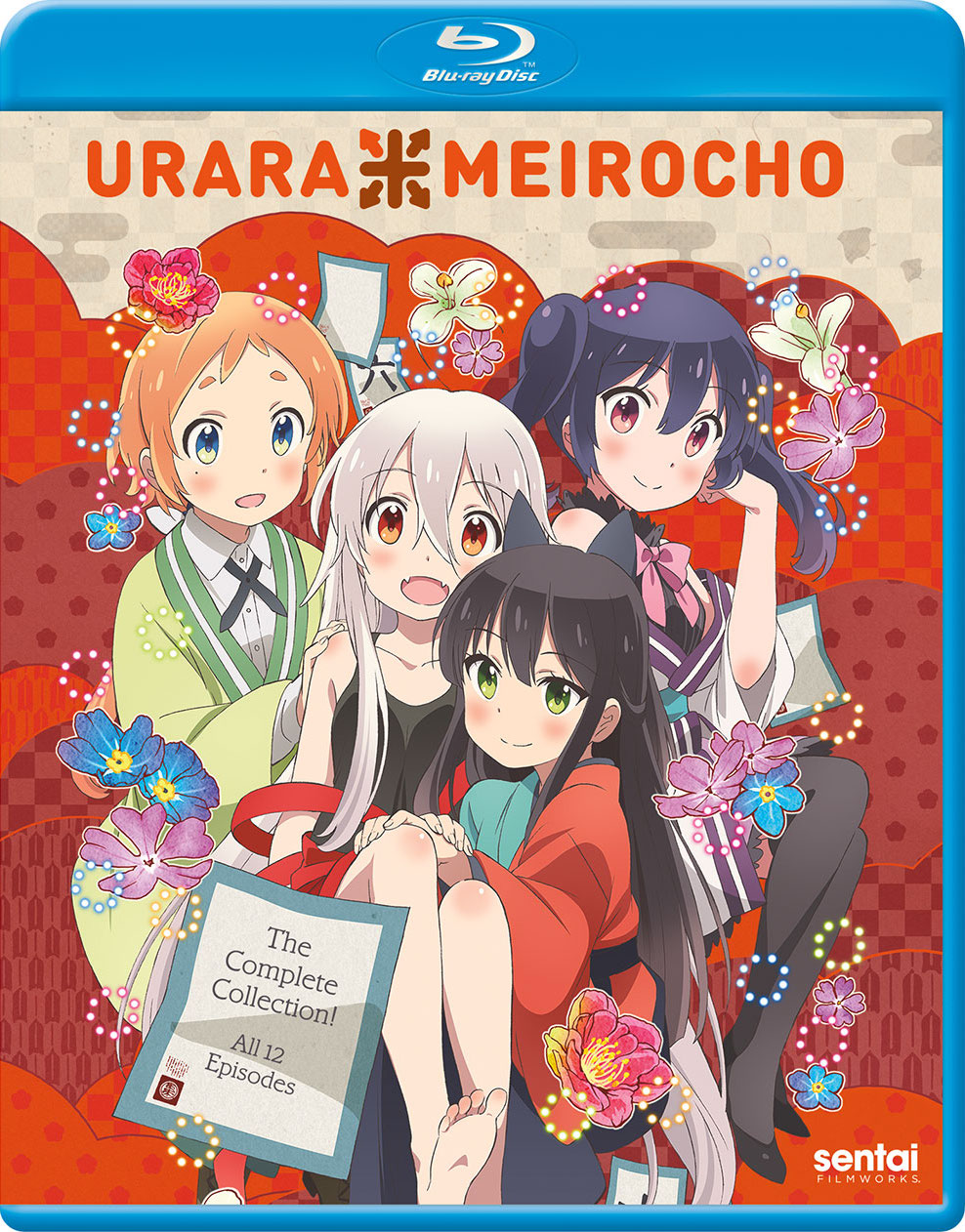 As a resident of Salem, MA, I often find myself surrounded by the art of fortune telling. Having the future and luck predicted by a famous witch in Halloween's world capital is perhaps one of the most popular things for tourists to do. So it's this homegrown knowledge that I have of this art that has drawn me into Urara Meirocho, another anime in the "cute girls doing cute things" sub-genre. Not only does this series do a good job showcasing many of these fortune-telling tactics, but it does so with an entertaining laugh in tow.

Based on the four-panel manga by Harikamo, Urara Meirocho places its focus on four girls training to be fortune tellers. The main girl Chiya (Sayaka Harada) is new to hanging with other humans, as she has been raised in the forest with her friendly woodland creatures. After some crazy shenanigans occur upon entering the town, she quickly befriends her fellow urara-in-training compadres. Living under the same roof, Chiya learns more about the likes of Kon (Kaeda Hondo), Koume (Yurika Kubo), and Nono (Haruka Yoshimura), who deal with their own quirks with the aid of their teacher Nina (Ai Kayano). 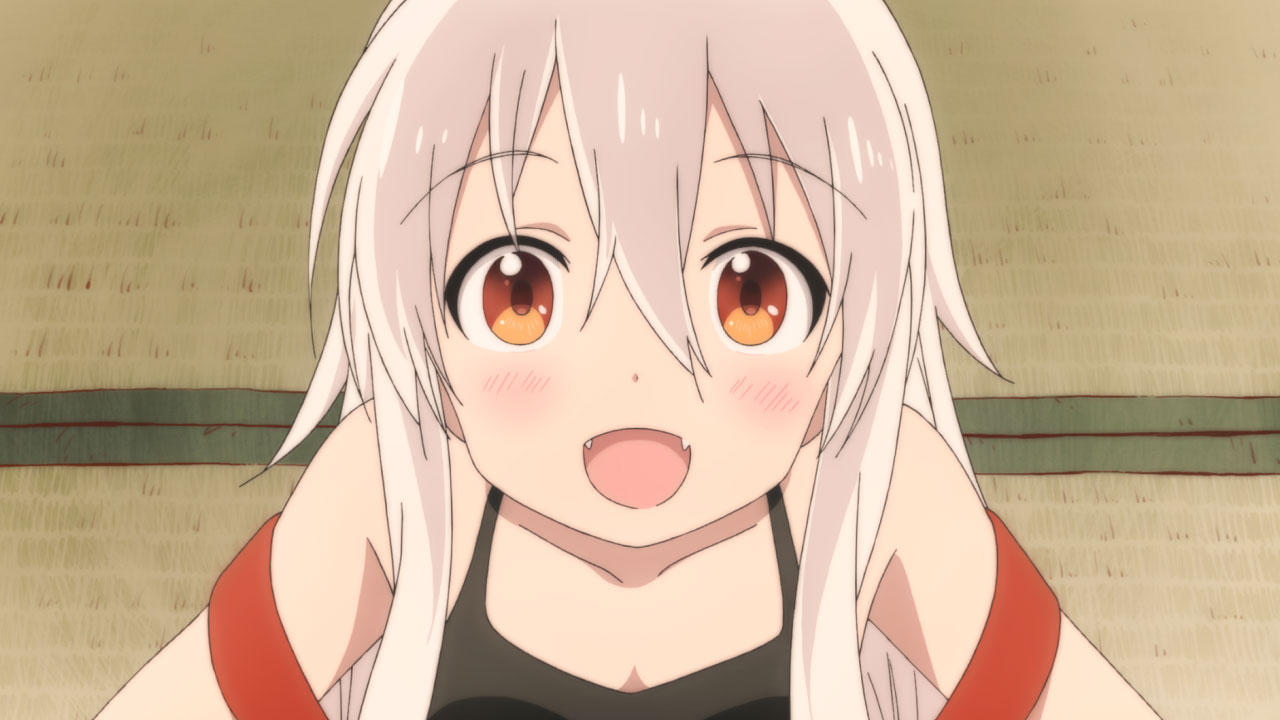 Right from the get-go, viewers are shown that every girl has their own set of goals and hurdles to deal with. Nono has severe social anxiety, which she attempts to tackle with the aid of her doll Matusko and her ventriloquist-like means of communication. Koume has a deep love for Western-based witches, with a goal to help rid the stigma that witchcraft is a mostly bad thing. Kon's goal is more family-oriented, as she aims to one-up her mother via the most challenging of ways. The same goes for Chiya, whose main purpose of entering the town is to seek out her mother that vanished on her as a young kid.

Growing up with witchcraft and the like almost always surrounding me, I can legit get the understanding of how the girls of Urara Meirocho feel when they're in a town that's practically the hub of this practice. There's a level of importance in wanting to specialize in something that's both mystical and wondrous to the brain and eyes. Granted, while it may be a bit of hooey in an American setting, the act of fortune telling is something that's very much respected in the East. Because of the attention to detail in its presentation, the acts of fortune telling aren't only pleasing visually, but they're also rather informative. 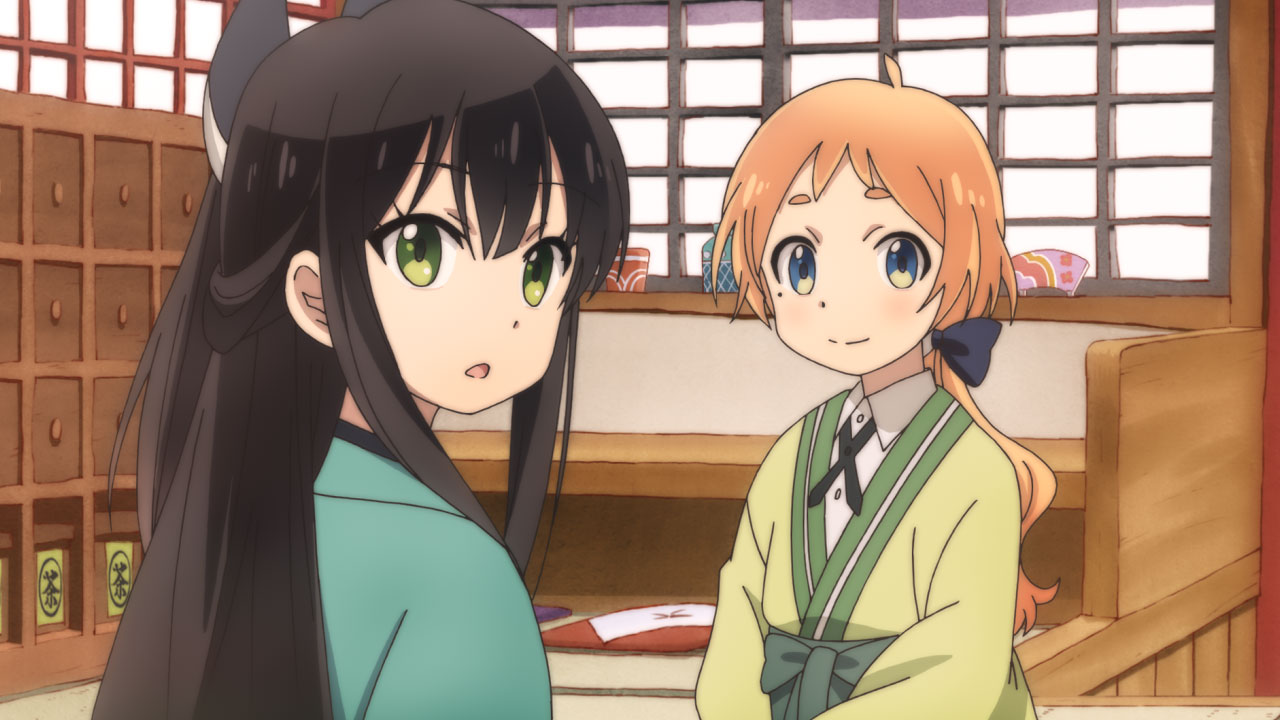 However, as this is a "cute girls doing cute things" sort of anime, the focus on the show is more placed on how adorable everything can be. While there are many moments of the characters in many "tee-hee" situations, it's the humorous means of showcasing these characters' mannerisms that makes it all the more entertaining. From Chiya's way of apologizing by showing her belly and Kon acting literally foxy when possessed by the Ouija-like Kokkuri to Nono's doll hilariously creeping out the rest of the cast and Koume using her fortune skills to find their teacher a soulmate, the show is filled with moments that'll make you both laugh and smile throughout its entire run. Credit certainly goes to the show's writer Deko Akao (Amanchu!, Anonymous Noise), who sews all the early events of the manga together to craft a fun and worthwhile show.

The downside of Urara Meirochu's 12-episode run is that it does end in a way that will make viewers want to read the original manga. While it does hint at the answers to a couple of the show's mysteries, it doesn't quite lift the curtain on everything that the series hinted at. I'm not exactly sure how popular the series was in Japan, but odds are there's a chance that this is probably all that we're getting of this anime. (Then again, we've been surprised by many series we thought we'd never see again getting another season or two, so we'll have to see.) 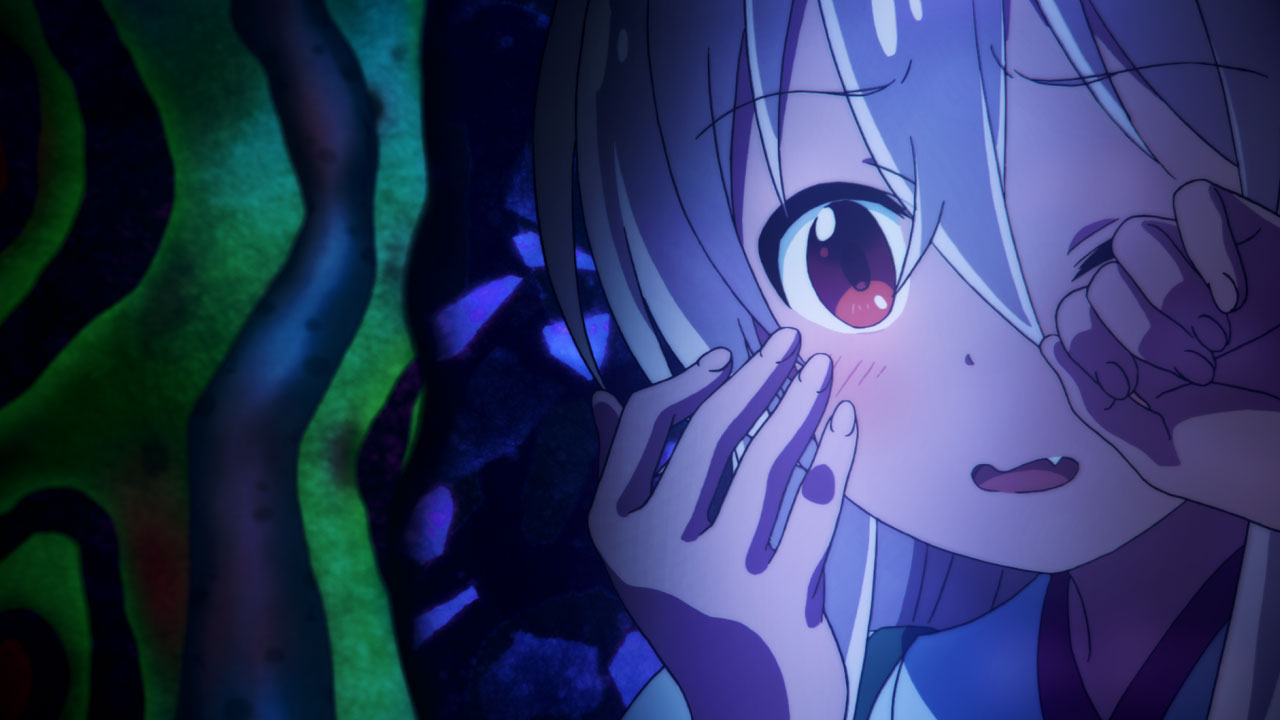 J.C.Staff (Flying Witch, Is It Wrong To Try To Pick Up Girls In A Dungeon?) animates the town of Meirocho with a fantastical blend of beauty and detail that's usually reserved for some of the bigger-named shows. The citizens and critters that run amuck the streets bring a lively feel to the town's giant surroundings. (Calling the town Meirochu, which translates to "labyrinth town," is by no means a coincidence.) Also wonderful is how expressive the characters are throughout its run, especially whilst practicing their fortune telling skills and having fun with their studies.

There's a fine level of cuteness in the voice acting portrayal of these characters, especially with Harada's puppy dog-like mentality with Chiya and Yoshimura's shyness as Nono. However, the real spotlight-stealer is Ayaka Suwa, who plays the town's police captain Saku with both androgynous toughness and blushing embarrassment when catching the others doing things she deems lewd. She adds a level of comedic kindle to the show's roaring bonfire of hilarity, acting as a strong straight man when paired with Kayano's frisky Nina. (Hell, I wouldn't mind seeing her get a spinoff manga, she's that entertaining!) 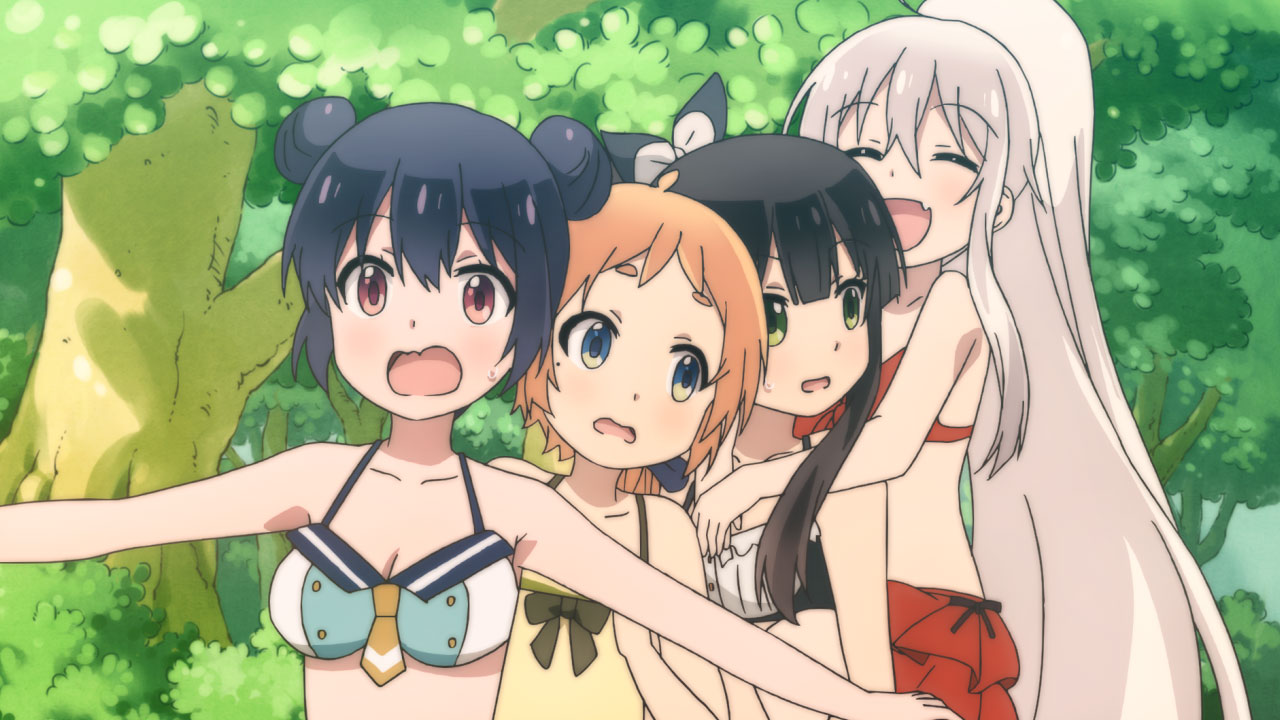 Satoshi Hōno (Clockwork Planet) presents a beautiful soundtrack that blends both Japanese and Celtic traditional sound into their own gem. Even during a tense moment in the show, the music that plays in the background is both soul-soothing and classically melodic, as if it's hardening back to a moon-drenched memory of day's past. Opening theme "Yumeji Labyrinth" is handled by the show's cast, presented via a fun and poppy means that will legit be quite the ear worm to get out of your head. Idol group Luce Twinkle Wink☆ takes the reins for the end theme "go to Romance>>>>>," a nice cutesy track that fits well with the anime's tone.

Sadly, when it comes to the extra goods, the Blu-Ray release is rather lacking. With only the credit-less opening and closing animations in tow, there isn't much here that adds anything special to the physical release. A shame, as the original Japanese releases contained cast commentary and footage from the series' premiere event, something that I personally would be curious to see and hear. (They also contained collectible cards and the occasional poster, which would've been nice to add on if Sentai Filmworks had made a limited edition of this release.)

In the end, Urara Meirocho satisfies both with its content and playful mannerisms. While it's definitely a show for those who want more "cute girls doing cute things" like Laid-Back Camp or K-On!, there's enough here that will entertain just about anyone looking for a light comedic affair. It may not win over skeptics of fortune telling or witchery, but it does without a doubt deliver a wonderfully lighthearted affair that will make even the most prudent of such practices crack a smile. Even without the aid of studying your cup's remaining tea leaves, it'll be easy to see that Urara Meirocho could find itself on your anime collection shelf; if not, then I guess I'll have to show you my belly as a means of apologizing.