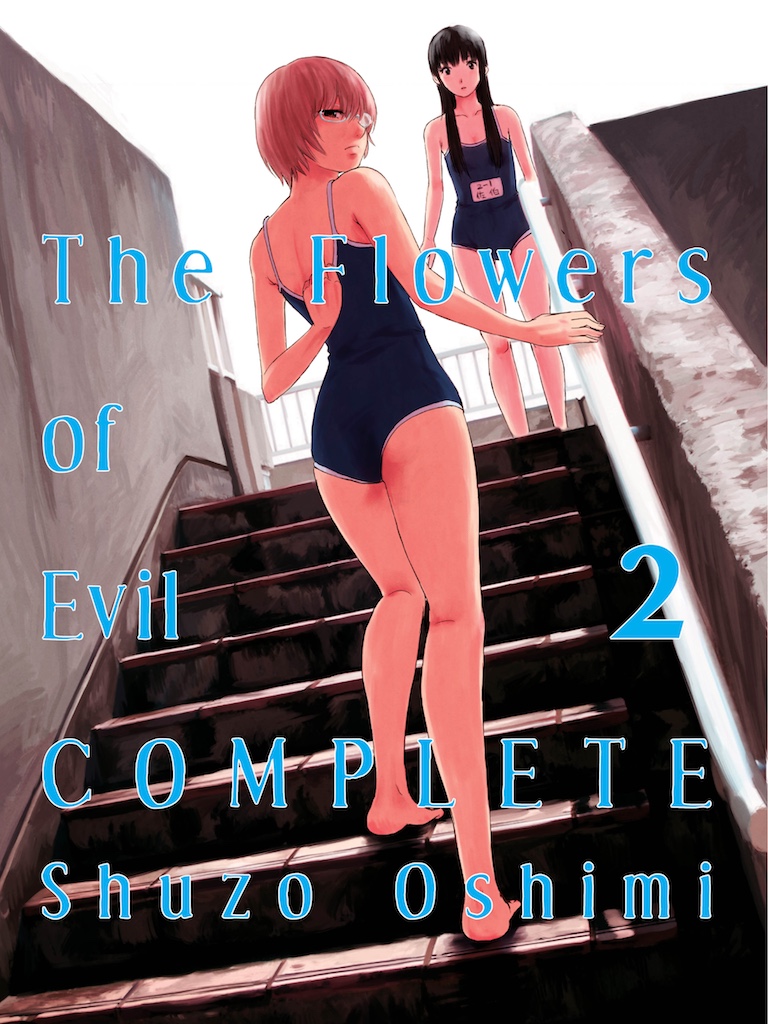 Rarely has a manga left me feeling conflicted about the events being unfolded quite like The Flowers of Evil. On one hand is the tale of adolescence revolting against the boring norm, but on the other...is some really messed up situations. All of this has two mentalities within me at odds: the one who feels squeamish about what unfolded, and the other who is very curious about what these circumstances are leading us toward.

The second omnibus volume of The Flowers of Evil (which covers volumes 4-6) takes place a little over a month after the events of the previous collection. A triangular rift has been placed between Kasuga, Nakamura, and Saeki, resulting in an awkward tension that keeps them from being too close. From that tension, a feeling boils up within Kasuga's belly, causing him to realize that Saeki is not the right girl for him. After a seemingly uneventful break-up, Kasuga works to bring back Nakamura, with promises to escape from the town and into "the other side".

Kasuga's plan to break through against the other "shitbugs" in town involves some pretty questionable actions, although it's become apparent that the questionable is what you're going to get from The Flowers of Evil. The real mystery revolves around how far he's willing to push through the norm of society by such means. And thus, this volume reveals the answer via some uncomfortable actions pushed through both Kasuga and Nakamura. A hideout for the two of them also serves as a sort of safe haven for their deprived urges and the like, with ladies' underwear hanging from the ceiling and disturbing acts of fun implemented between the two of them.

Saeki's discovery of the place finds her attempting to break from the norm herself, but her means of doing so will more than likely cause some readers to feel emotionally disturbed. Even I don't feel comfortable making mention of what she does, but let's just say that it'll raise the hairs on the arms of those behind the recent #MeToo movement. It's a no-turning-back sort of situation that occurs, with even the parents of these kids having no idea what to do with their troublesome offspring. When the police get involved with the predicaments on-hand, all it seems to do is add fire to the disruption Kasuga and Nakamura wish to present at a summer festival.

The Flowers of Evil has thus far been about smashing through the norms of society, but the issue resides in the adolescence of these kids. Perhaps the point of Shuzo Oshimi is to present these rebellious kids at their most extreme, only for the cold harsh realities of normality to stop them dead in their tracks. One can only go so far as to fulfill their angst-riddled fantasies, but when they hit an impenetrable wall, all it'll do is make their lives even more painful. A harsh realization, indeed, one that Kasuga's parents have been trying to hammer into their child. Unfortunately, they didn't count on Nakamura arriving with a literal weapon of destruction in-hand.

But is the path towards the wanton destruction of normalcy leading to anything good? That's where I feel conflicted the most after reading this volume. Sure, it's interesting to say the least watching these teens act out their frustrations in such a way, but their reasons are getting a little twisted. Even seeing Saeki do to Kasuga the act that must not be named feels like Oshimi's just pushing what can be gotten away with in a mature-rated comic, rather than some deeper sense of barrier-breaking. And yet, it's watching Nakamura and Kasuga finding a place for their own desires that has me coming back to this peculiar world, with my need to know what they're planning overcoming any sort of desire to stop reading onward.

With that all being said, it's gotten to a point where I feel like I need to be careful regarding recommending The Flowers of Evil. The second volume had some great revelations behind the thought processes of Kasuga, Nakamura, and Saeki. However the disturbing actions of these characters has led me feeling like there isn't much of a lesson to be learned regarding one's immorality. And like that, the both sides of my brain that were once at odds leads me towards this conclusion: The Flowers of Evil is all kinds of screwed up, but I kind of want to see where it's going.