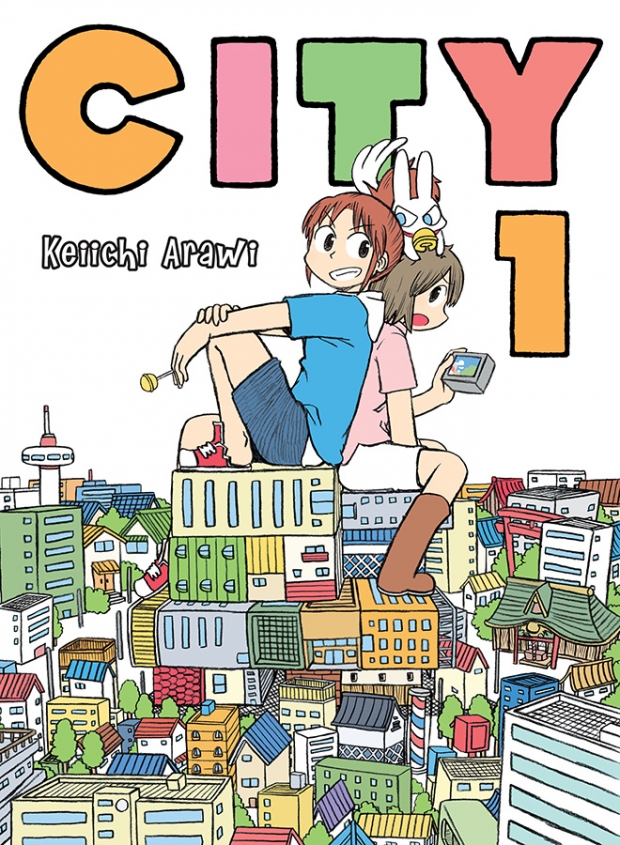 I'll be blunt: all I really need to say is that the creator of nichijou is back with a new series, and you readers will more than likely rush out and grab it. After all, Keiichi Arawi has been considered king of the most nonsensical comedy around ever since his first hit manga was given the anime treatment by Kyoto Animation. But now, after his beloved series came to an end -- along with the releases of his Helvetica Standard collections -- Arawi is back with a new story about the most absurd town imaginable: CITY. And yes, the laughs are just as strong here as in his past works.

After a useless fable about a bird is told, CITY begins its crazy story with Midori Nagumo fleeing her landlord to avoid paying her rent. With a perception that's akin to an A.D.D.-riddled child, the focus jumps from town officer and Makabe restaurant owner to crazed old man watching all the events unfold via his computer screen and some weird rabbit/dog hybrid whose sole creation may be for merchandizing purposes. But with Arawi's trademark flare, all these city folk manage to be tied together with one major goal: to make its observers crack the hell up with pure insanity. 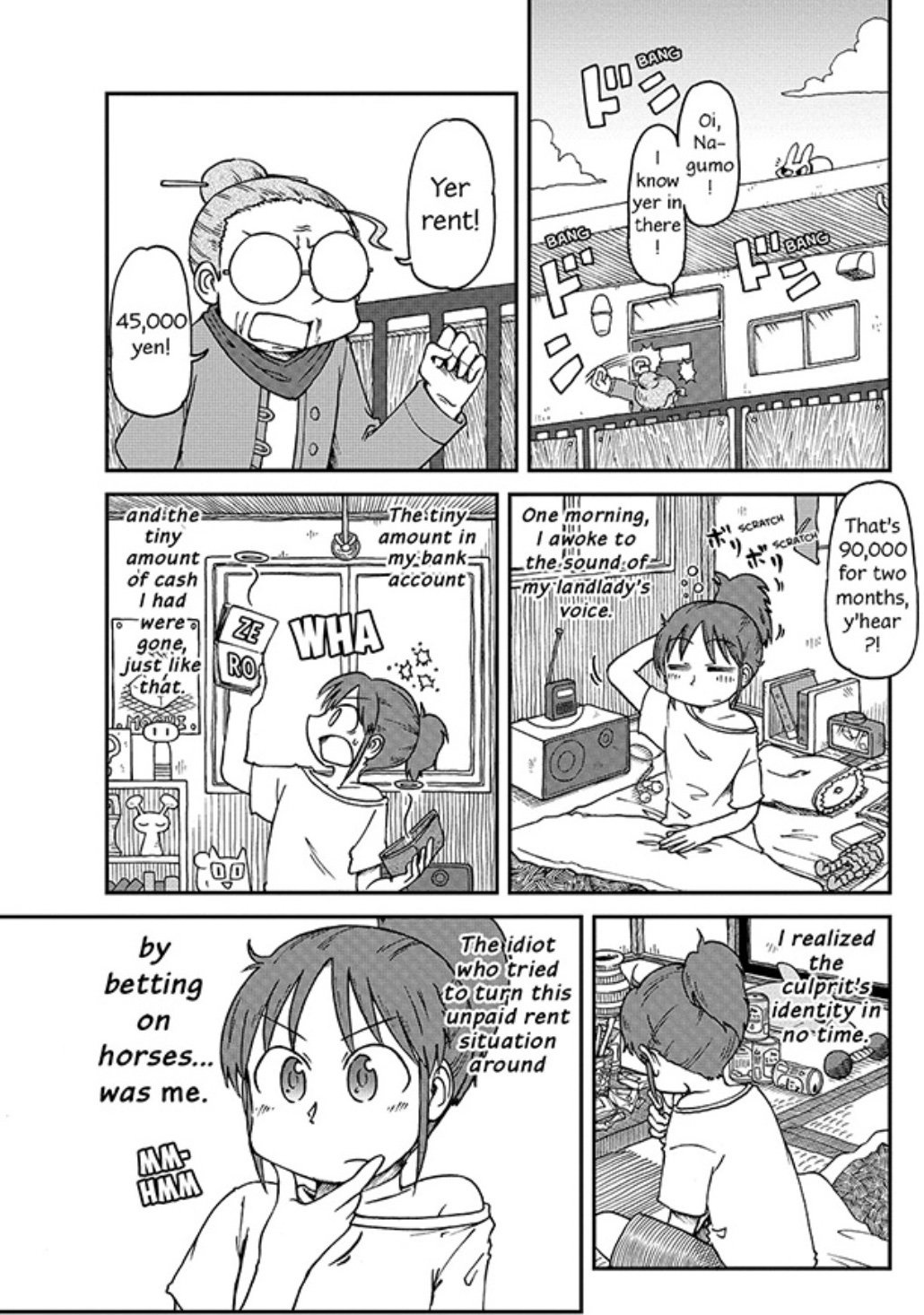 It's very easy to see what it is about CITY that makes it appealing to fans of Arawi's work. There's this sort of unexpected twist that comes with his style of comedy, one that brims with both a W.T.F. mentality and having the wool pulled over one's eyes. In one instance, you could be greeted with a visual gag, like when Midori nabs a statue that looks suspiciously like a famous Final Fantasy mascot; but in the next moment you are then treated to a humorously awakening moment where our rent ditcher is given the opportunity to make some cash, only to discover whose family she'll be working for in the long run. Of course, nothing beats seeing an old landlady use some of her physical skills to knock down a totally unexpected resident.

Like his previous works, there is a lot of meta jokes to be had in this first volume. One of the best examples involves a struggling writer (who may or may not be Arawi himself) trying to come up with a story for his next chapter. For the majority of the time, he and his editor spend the chapter bawling their eyes out, with there being no actual story to be told. It's either a clever means of laziness or a fine understanding of how hard it is to crank out a new chapter each week, but either way, it delivers with big laughs solely by the way these characters hilariously emote. 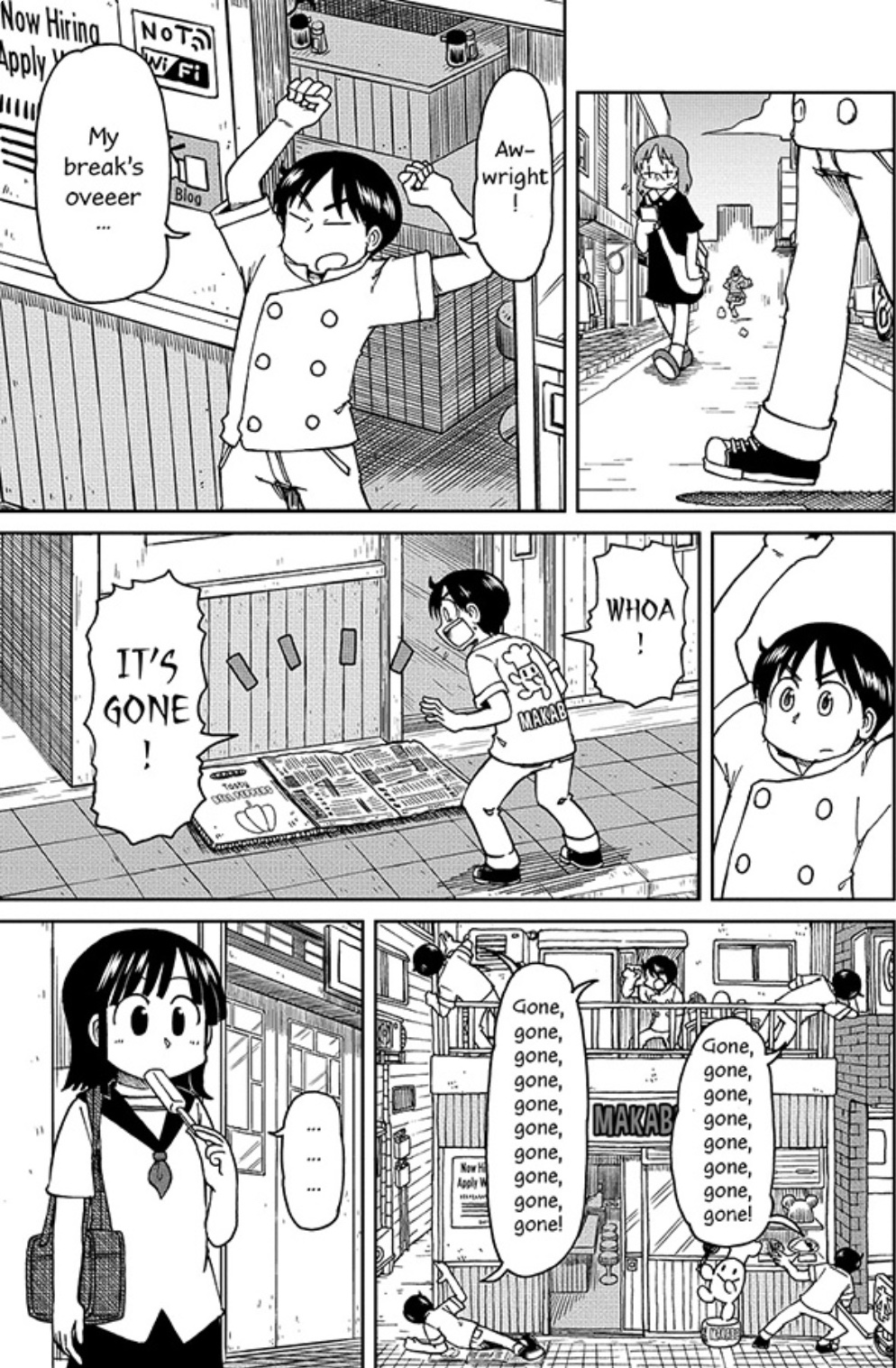 CITY is simply a marvel to look at, with the attention to detail from Midori's clutter-filled apartment to the tiniest of broken pieces of a statue our main protagonist dropped filled with such life and brilliance. It's a kind of craft that I don't often see in manga today, with every line and box drawn on page here brimming with a sort of character usually used on just the people this series is focusing on. Like he did in nichijou, Arawi has given our eyes a real treat to behold, like the finest Devil's Food cake made just for our pupils. (Whoever will someday grab the anime rights to this manga will certainly have their work cut out for them, that's for sure!)

While it may be awhile before we know if these characters will be as memorable as his previous works, Arawi has shown that his trademark style of comedy carries over well within CITY. Brimming with both physical and metaphorical character, the first volume not only sets up this strange new universe nicely, but it already has given us a good reason why this manga creator is one of Japan's most cherished comedy writers. Those waiting for something to fill that void Nano & Professor left will no longer have to pray to mousey gods or wear a good-luck miniskirt, for CITY is here to bring us back to the sincerity of absurdity.