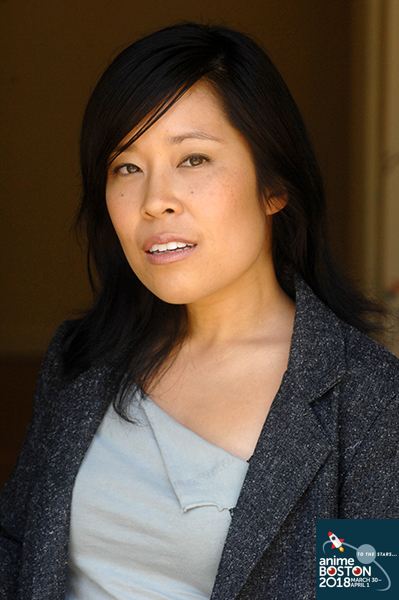 Grab your favorite time traveler and rock out with your tea-loving bandmates, as Anime Boston 2018 has announced that Stephanie Sheh will be joining the guest ranks this Spring!

A voice actress, voice director, ADR writer, and casting director, Sheh was blessed to voice Mitsuha Miyamizu in Makoto Shinkai's hit anime movie Your Name. Recently she voiced Yuho in Masaaki Yuasa's Lu Over the Wall, where she got to showcase more of her singing chops. Stephanie's probably most well-known in the anime realm for voicing Sailor Moon in the current VIZ Media Release of Sailor Moon and Sailor Moon Crystal, as well as Hinata in Naruto, Orihime in Bleach, Mikura in The Melancholy of Haruhi Suzumiya, Kuro in Blue Exorcist, and Yui in K-On! Stephanie is excited to be returning to voice Eureka in Funimation's release of the upcoming Eureka 7 movies.

In addition to anime, Stephanie has many voice credits in video games, most notably Tharja in the Fire Emblem series, Airy in Bravely Default, Mikan in Danganropa, Kyrie in Devil May Cry, and Rebecca Chambers in a number of Resident Evil games. She's also done motion capture work for games as well as animation. Most recently she mocapped Maz Kanata in Star Wars Battlefront 2. Stephanie has also voiced characters in original animation shows like Zhuli in Legend of Korra, Katana in WB's DC Super Hero High, Jinafire and Boolittle in Monster High, Share Bear in Care Bears: Welcome to Care-a-lot, Vega in Disney's Stardarlings, Popo in Miles from Tomorrowland, and various roles in Cartoon Network's We Bare Bears.